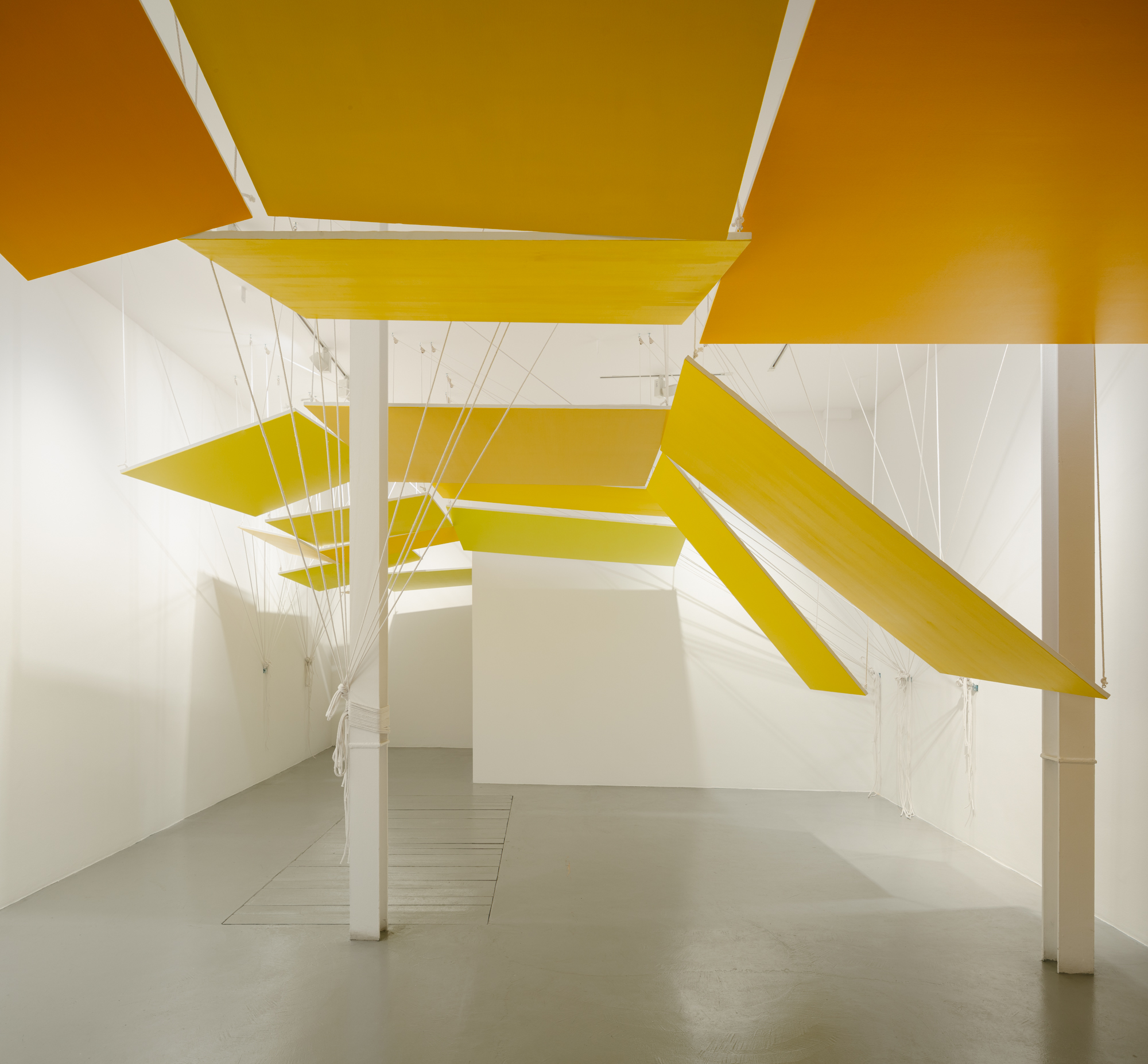 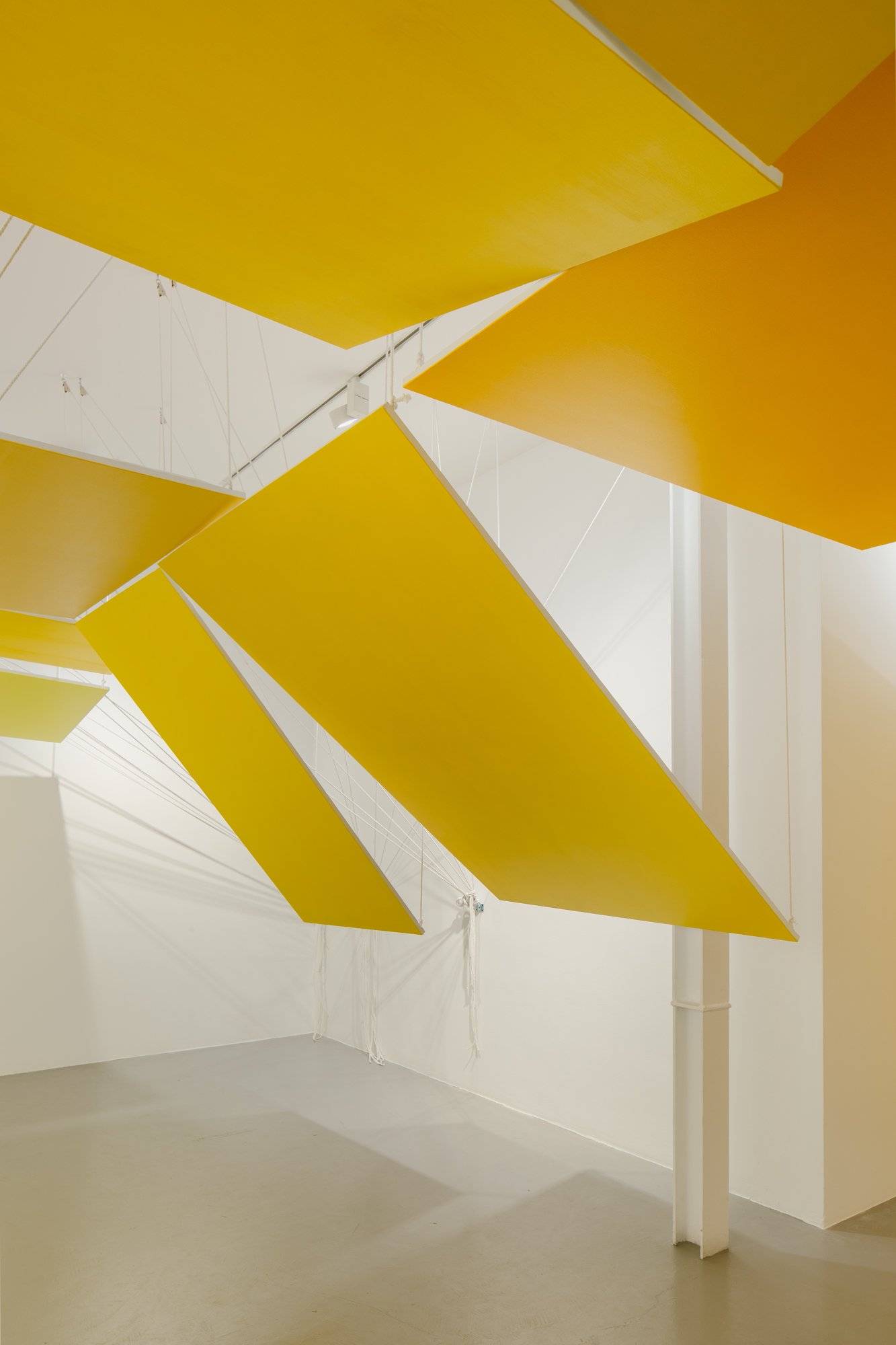 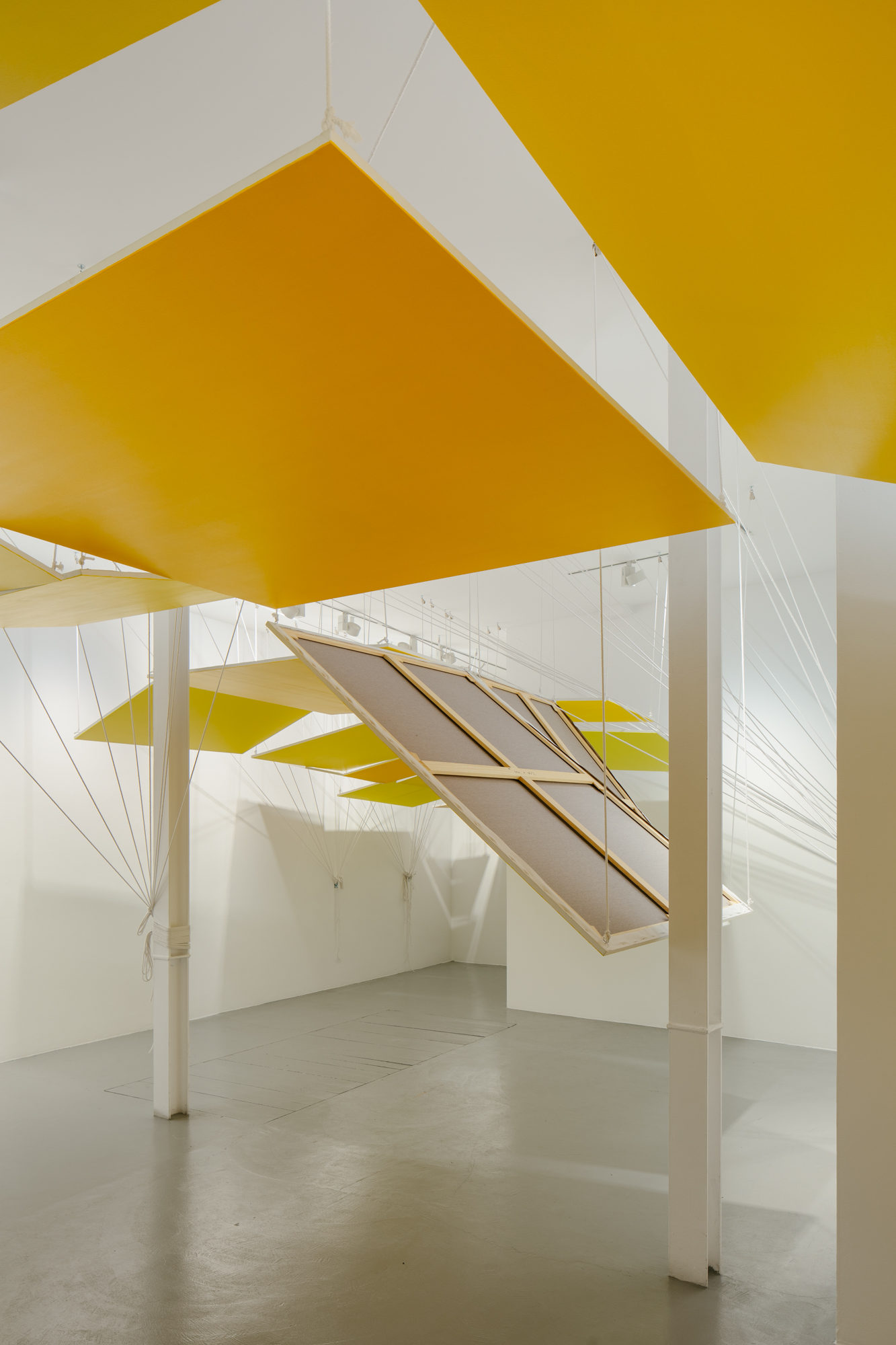 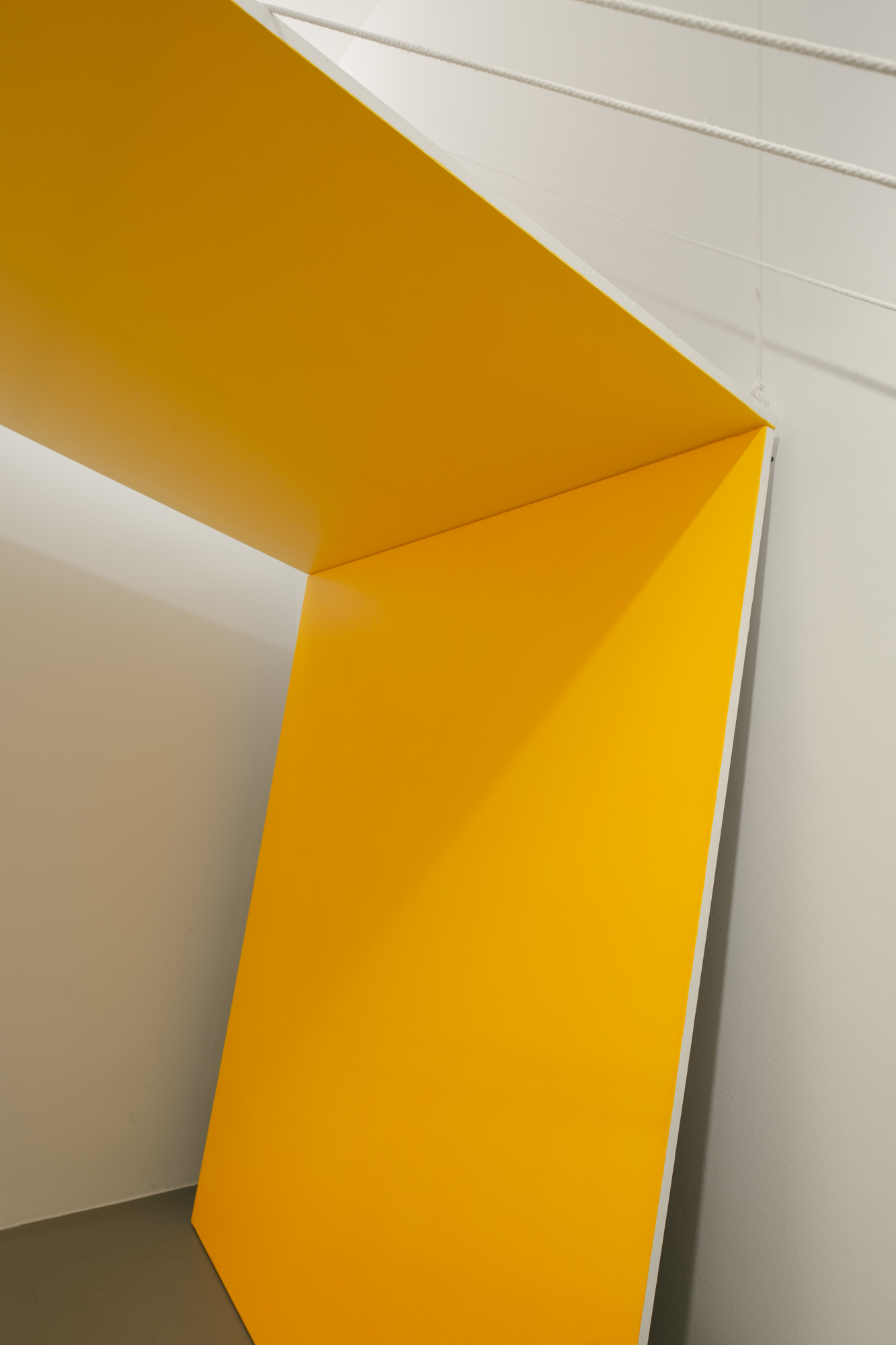 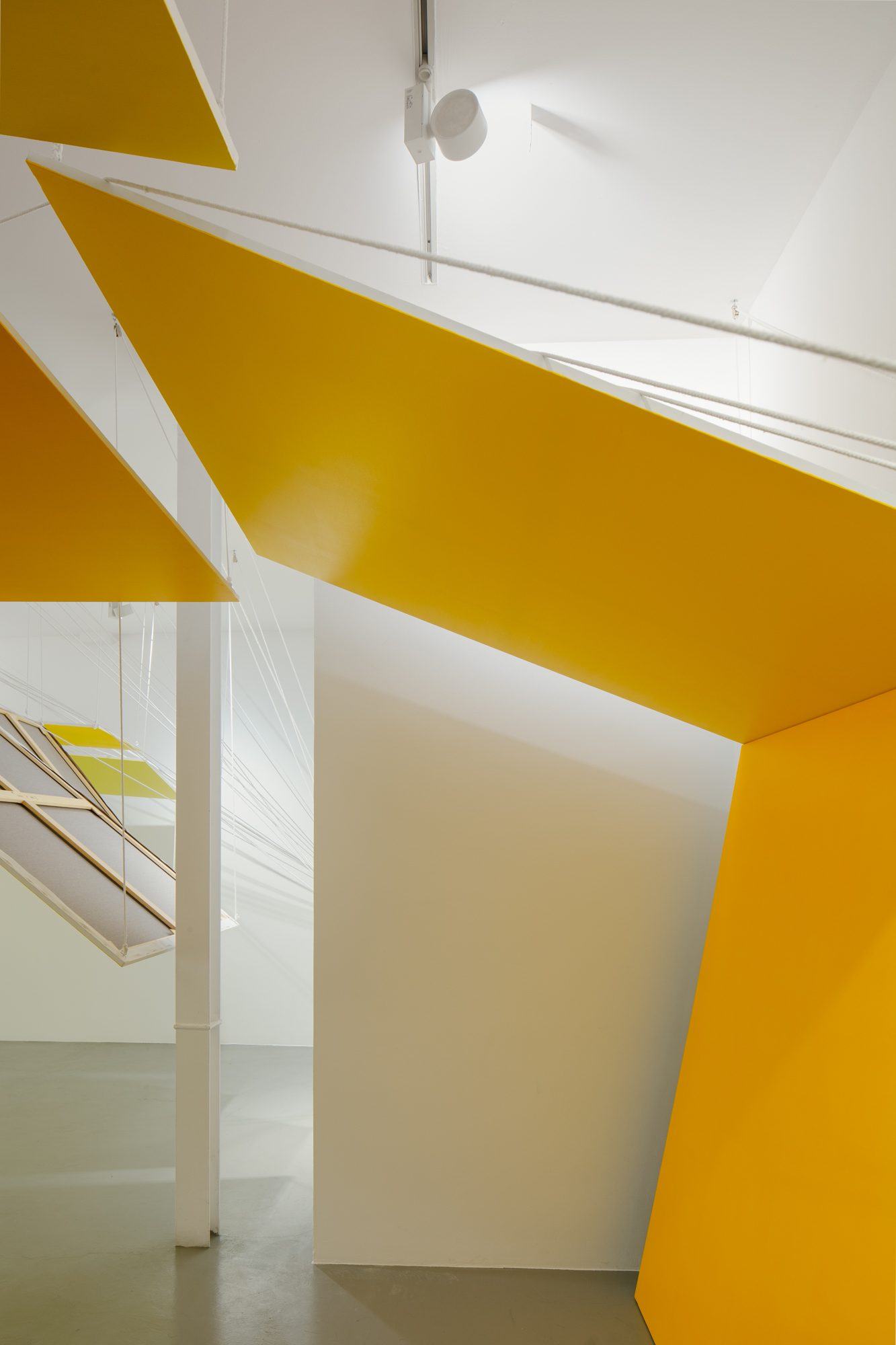 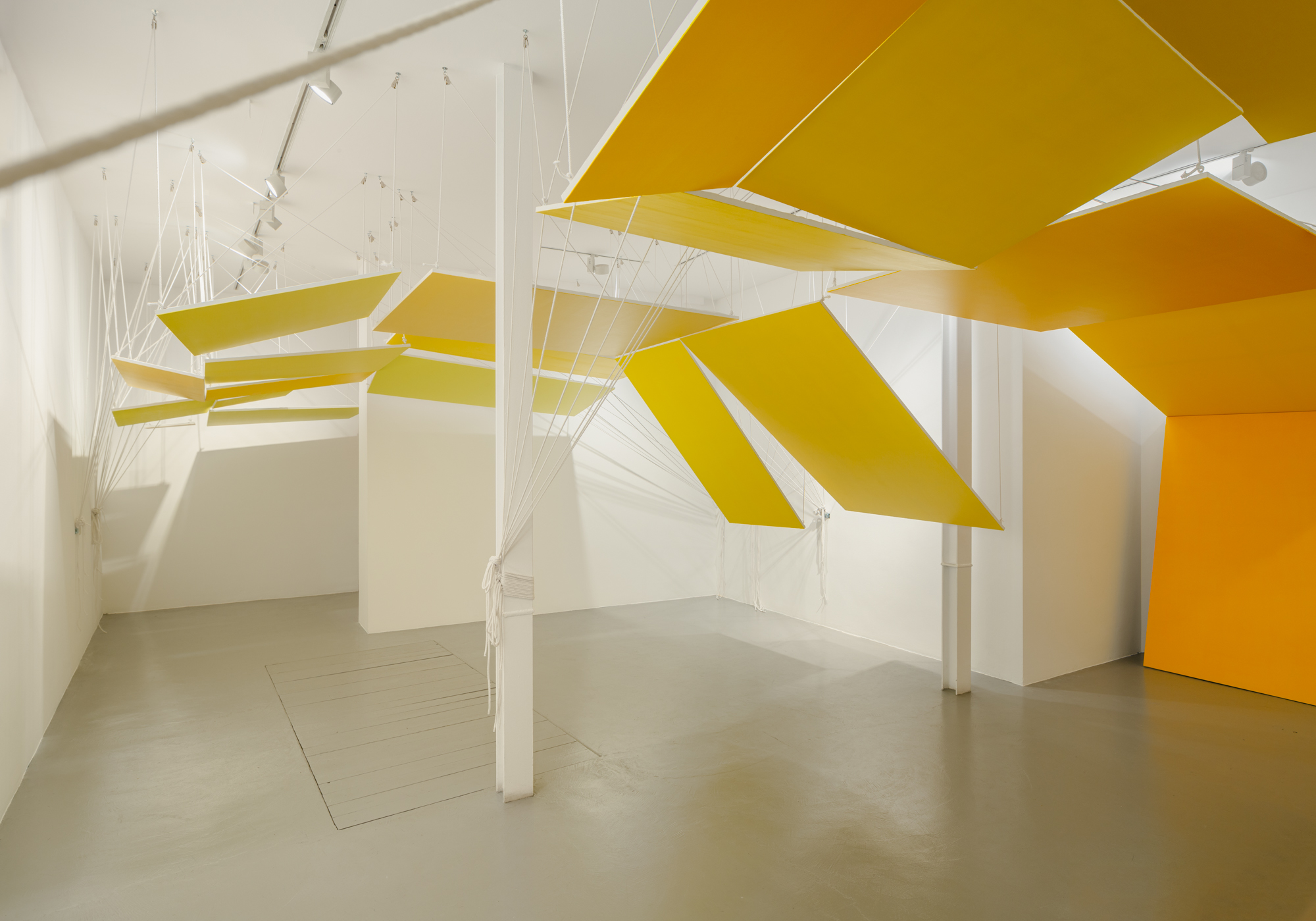 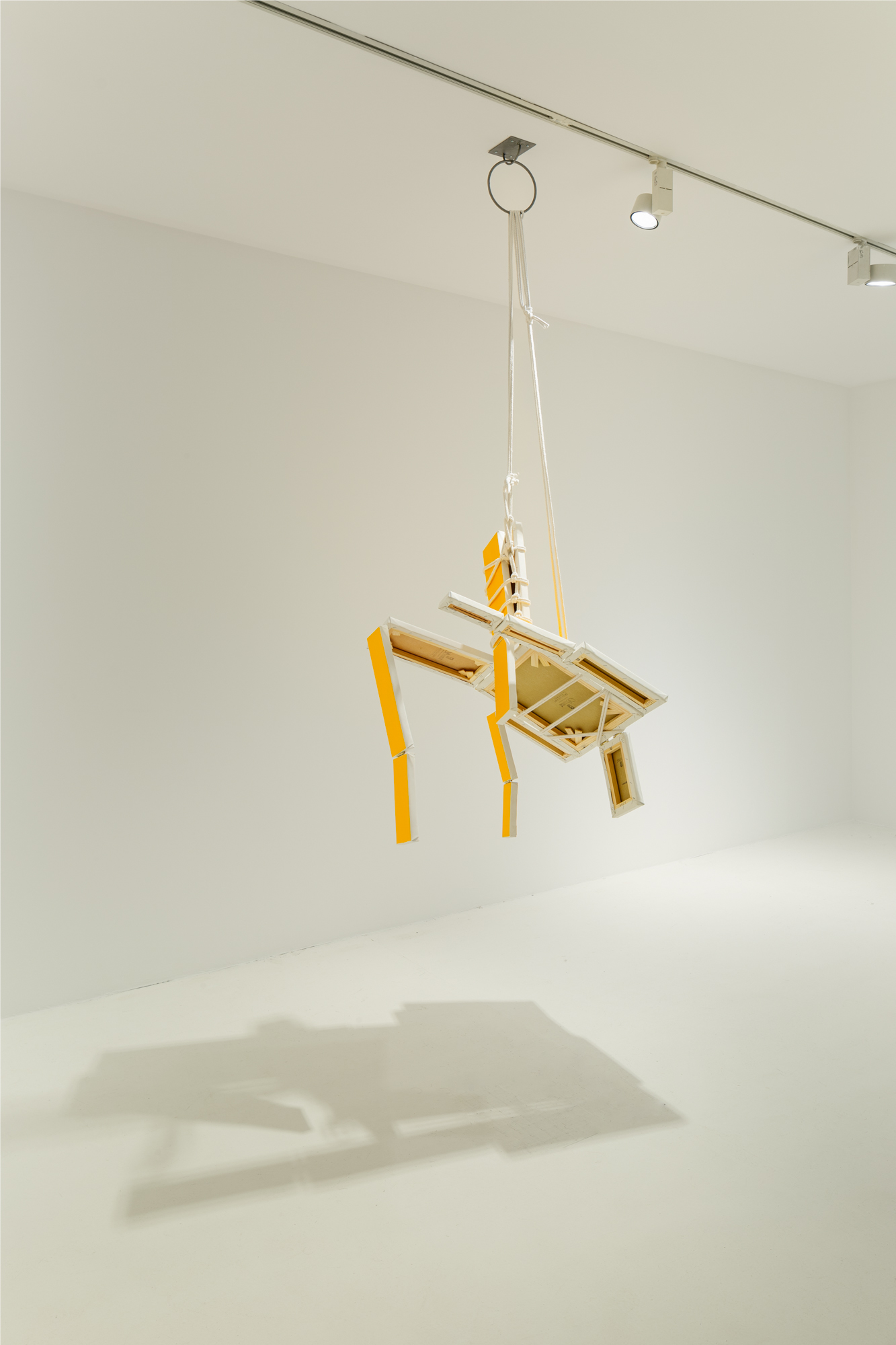 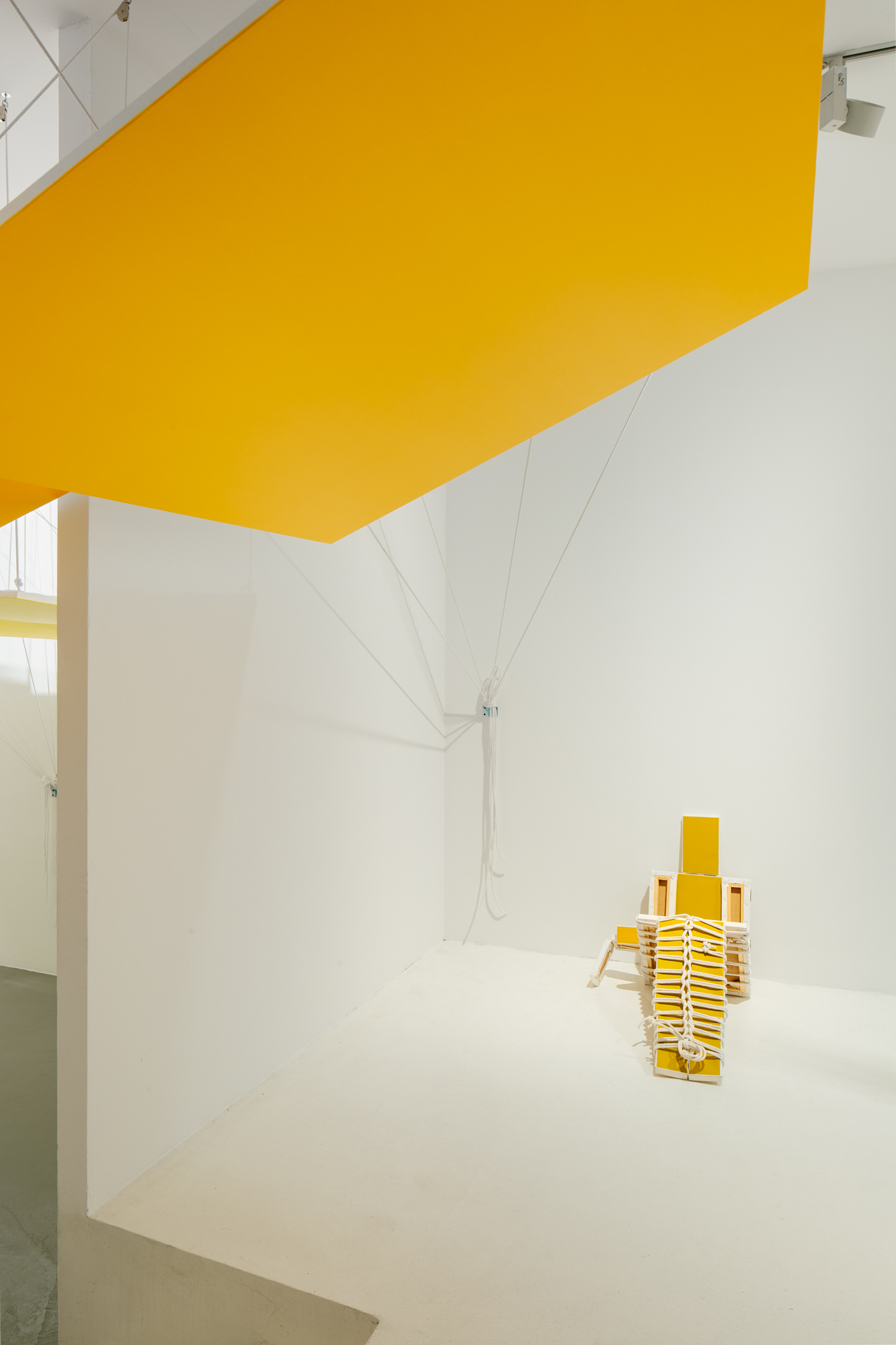 If I think about how I came to these paintings, how I got here, two specific moments come to mind. One of them was in one of my classes in 2012, where I found myself saying, “I am red and pink.” The other was in my house in 2014. I spent several days going back time and again to a red painting that was almost as wide as my body and as tall as some point between my shoulders and hips. I really wanted to dress it.

1. I rehearsed a self-portrait made from six paintings with different mixes of red and pink and a structure that could be hung from the wall like a single painting. The word monochrome does not encompass it, but it’s as close as I can get.

2. I arranged a heap of clothes I took out of my closet by color. I placed one garment inside another until some ghostly bodies took shape. From that bunch of clothes, I separated out a vest with a diamond pattern. I eventually put it on that red painting.

Since it has a wool vest on, that painting is now a body. My relationship with it and its assemblage left me feeling strange and very exposed. I stood in front of something, just one of so many things in my studio.

The title I chose for that painting of seven monochrome paintings with shades of red was another question: “¿Cuánto puede un cuadro?” [How Much Can a Painting Take?]—the name of an ongoing process.

In 2011, I lay down on a rug to look up at a red painting suspended from the ceiling by some ropes that themselves were hanging from pulleys, their movements restricted by a knot on a hitch on one side of the gallery. The height of the painting was altered a number of times at the request of the people underneath it.

How much movement does non-movement generate? I look at it; it comes closer and moves back.

I draw the positions of the paintings as if they were the patterns of bodies bound, still from pleasure. I show them to someone who knows how to tie up bodies. I ask them to teach me. They show me by doing, immobilizing me, and that experience marks the beginning of my journey into thinking about a time and desire of my own. I use the marks left by the bonds as notes on what other ways of living we might be able to construct. I have the feeling I went far away. And that I can share it.

Accumulation of intimate experiences shared among several people gave space and time to conform a series of paintings that I titled “Las cosas amantes” [The Loving Things]. A body tied to a piece of furniture, a body tied to a column, a suspended body is a body that lost its human form. I continued to think about how one painting can be constructed by several and my insistence on calling it a painting even though there are many of them or it no longer even looks like a painting. With these paintings suspended, tied together, everything that makes up a painting came into view. Cloth stretched on a frame, clamps, hooks, a tensioner, in this case, the rope.

When I paint, can I help but think that I am painting a canvas that is mounted on a stretcher and that the movement is the tension between them?

For those paintings, I start out choosing two colors—pink and brown—for all the places that, alone or together, they can take us. I envision color as that which anticipates the word, that which cannot be controlled and, hence, has no gender. Color is the ideal ally of these bodies, these paintings. Do they act in concert because they have been set free?

A chair hanging from the wall, resting on a suspended painting. Legs and painted taut canvas partake of the same force. The canvas does not rip; it stays still beside the mark. Why deny the scratches, the bruises or marks of a canvas if they are the register of what that painting has experienced? New conditions appear, conditions the paintings themselves impose.

Through bonds and restrictions as explicit practice of non-movement, those bodies take on new forms—the ones that make me think that we can come up with ways of relating outside expectations or ideas of what we are capable of doing. It may look at a glance like everything is rotten to the core, but the invisible, inner movement, tells me that a turn of fate is possible. Think.

When I look at abstract paintings, even austere ones with minimal gestures, I can’t help but seeing them as laden with stories, with bodies, with shifting identities. Not laden with, perhaps: they are bodies with everything a body has to tell.

Painter, printmaker and queer activist, Mariela Scafati uses unframed, monochrome canvases to create three-dimensional objects and installations that reinterpret traditional genres such as portraiture and landscape painting. Painting serves Scafati as a medium of memory and processing of her personal experiences, crossed by community work.

This year, she took part at Documenta Fifteen with the project Rancho Cuis, as a member of Serigrafistas Queer, a group that create slogans to print on t-shirts to use at LGBTQIA+ pride marches and transfeminist demonstrations. Since 2013, she has been part of Cromoactivismo (together with artists Daiana Rose, Marina De Caro, Vic Musotto and Guille Mongan), a group that uses color to intervene poetically in political events.

Among other collaborative projects related to screenprinting, education, performance and radio, Scafati is cofounder of Taller popular de Serigrafía (TPS); she was part of Belleza y Felicidad; in 2014 she made the performance Ni verdaderas ni falsas with TPS and Serigrafistas Queer t-shirts, that was also presented in 2022 in Reina Sofía Museum in the context of Giro gráfico exhibition; she created Radio Electrónica Artesanal together with Lola Granillo.