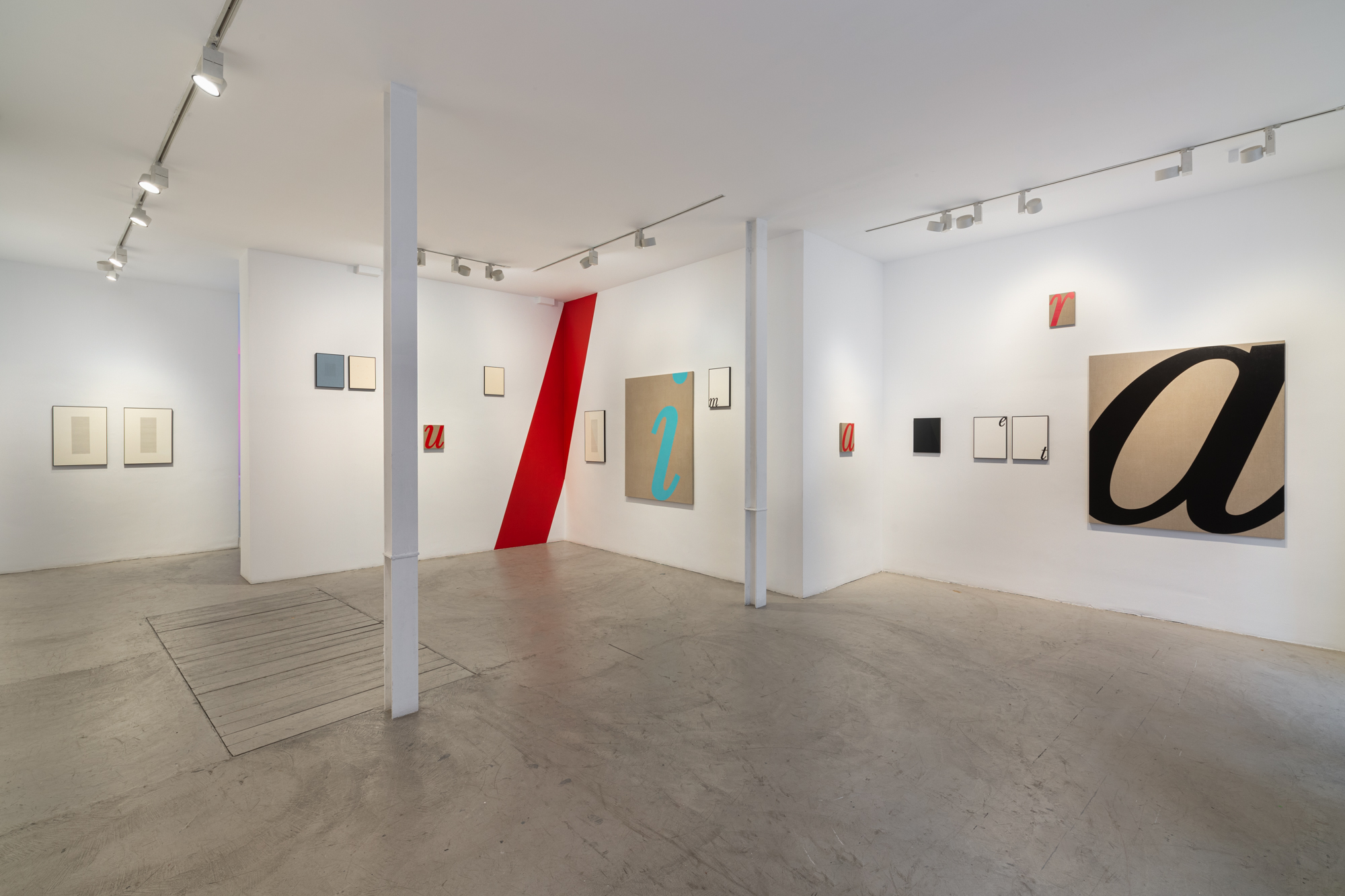 We can dream about the last writer, with whom would disappear,  without anyone noticing it, the little mystery of writing. […] What would be the result? Apparently a great silence.

Maurice Blanchot, The Book to Come

With the statement Toda letra es la última letra [Every letter is the last letter], Jorge Méndez Blake sets the stage for his new exhibition at Travesia Cuatro in Madrid.

The phrase contains the creative moment of language, a place where something begins and something ends. A turning point where the fragility of culture as an instrument of communication is exposed, placing us in a historical moment close to the catastrophe. With its dissection, each letter acquires autonomy, taking up different formats. There seems to be a will to pay homage to the sign, in a kind of melancholic act towards the creation of the alphabet more than 5,000 years ago with which civilization was formed.

On the threshold of post-language, where the death of the alphabet, of the writer, of literature is gestated, Toda letra es la última letra [Every letter is the last letter] rises before the threat of a possible dystopia and at the same time as a cry for help and warning not to lose our world, to save the signs that constitute who we are, a poetic cry in big headlines so that we keep the what is left of humans in the word.

We are signs, we are language.

In the second room of the gallery, in a desire not to let go of the word, the artist performs – through works of neon inspired by concrete poetry – a meditation on the poet and his stereotypes. These “poetic situations” can also be read as moments and places inspired by classical imagery used in romantic poetry: mountains, ruins, ponds, pyramids, where the poet finds himself between the tragedy and comedy of the creative process.

His work explores the possible intersections between literature, visual arts and architecture, fusing different historic and geographical elements, provoking new readings on the role of language in our culture. The artist employs analysis and synthesis as tools to transform the narrative and the poetic into visual compositions, attempting to shed a light on the material aspects that are implied in the act of writing. Similarly, Méndez Blake has devoted a significant part of his work to studying libraries as relational systems in which historical and cultural dimensions of a given context converge.

His work has been part of group shows at the Musée d’Art Moderne, La Maison Rouge and the Musée Mac/Val in Paris, France; the Bass Museum in Miami, the Aspen Art Museum, the Artspace in New Haven, Hessel Museum of Art in NY and the Museum of Contemporary Art Santa Barbara in the USA; at the Fundación PROA in Buenos Aires, Argentina; at the Fundación Marcelino Botín, Santander and Casa Encendida, Madrid, in Spain; at the Stedelijk Museum Schiedam and Frankendael Foundation in Amsterdam, Netherlands; the Queensland Art Gallery, Australia; the National Gallery of Victoria, Melbourne, Australia; the ASU Museum of Art, Phoenix, USA; in BOZAR, Brussels, Belgium; the Zacheta National Gallery of Art, Warsaw, Poland. At the Fundación JUMEX, the Museo de Arte Carrillo Gil, the Museo Nacional de Arte, the Museo del Palacio de Bellas Artes, in Mexico City; MARCO, Monterrey; Instituto Cultural Cabañas and Museo de Arte de Zapopan in Guadalajara and Museo Amparo in Puebla, among others.