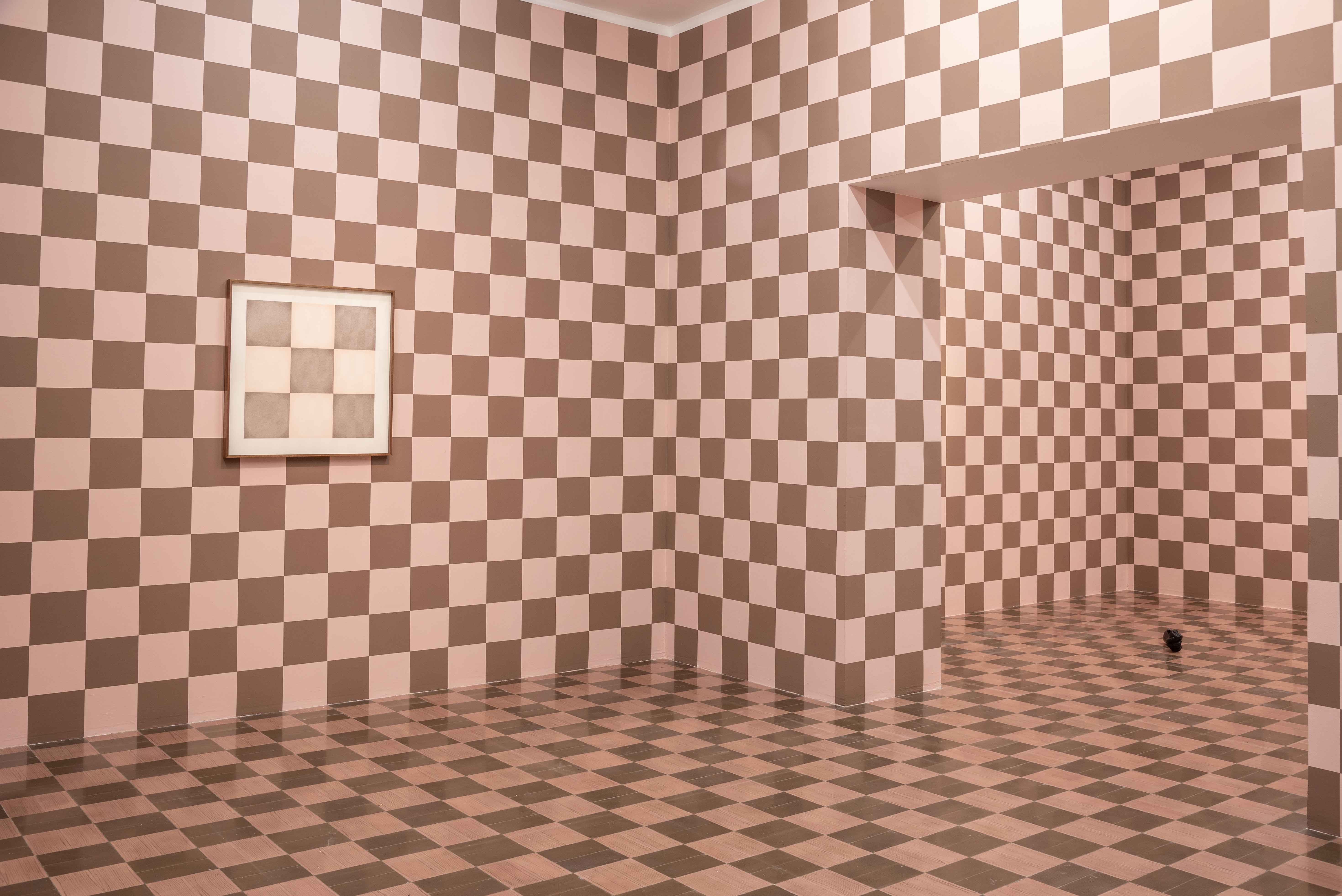 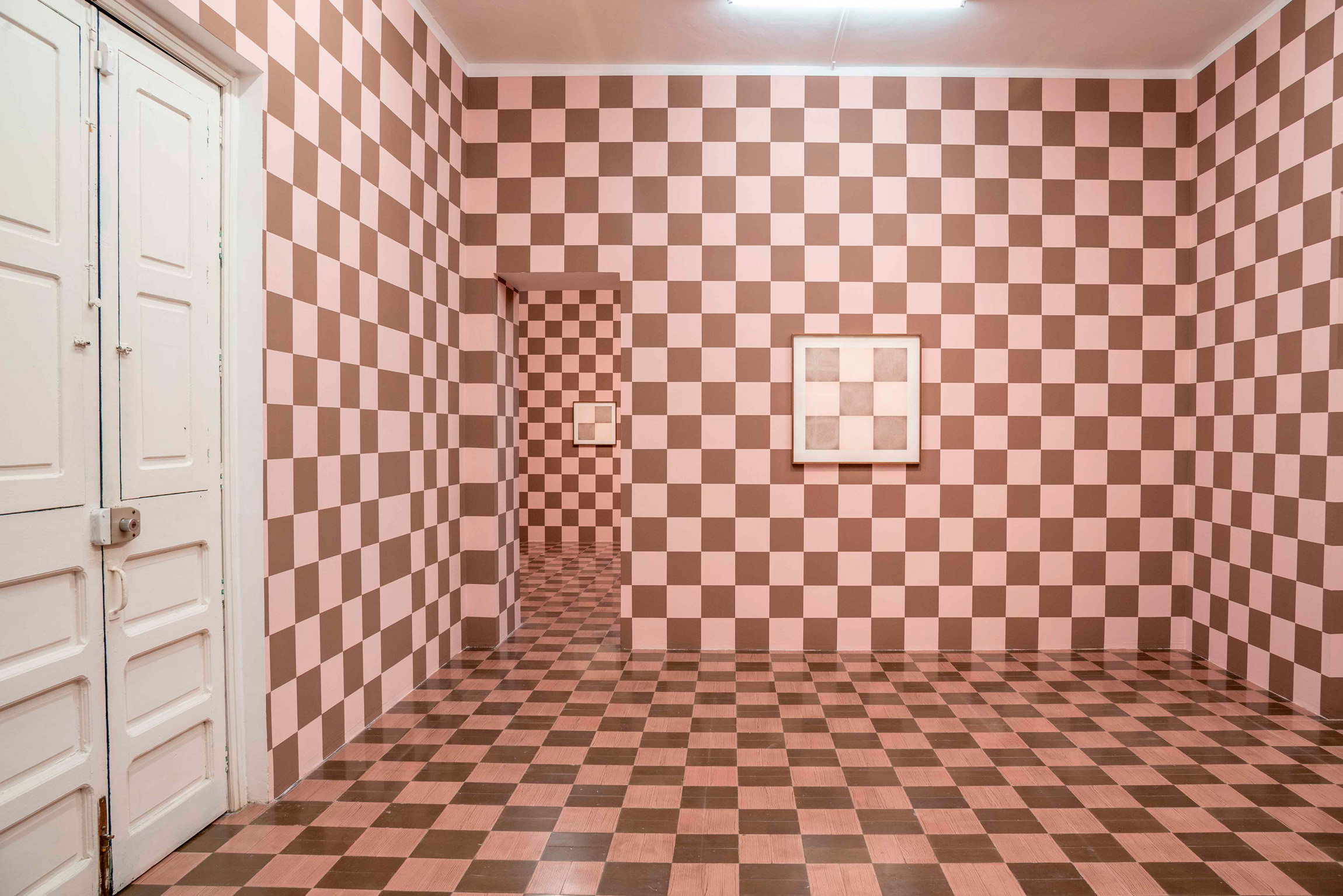 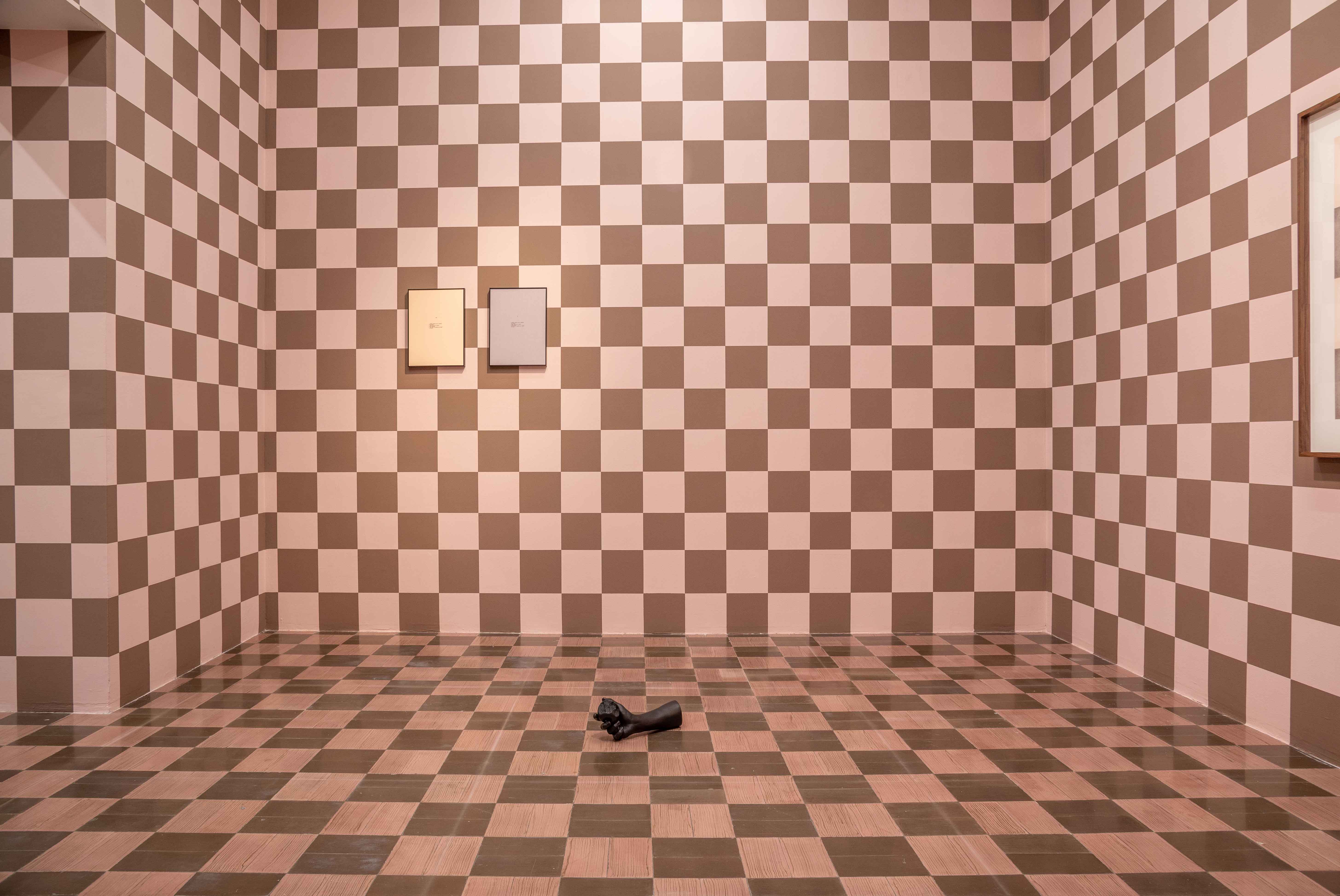 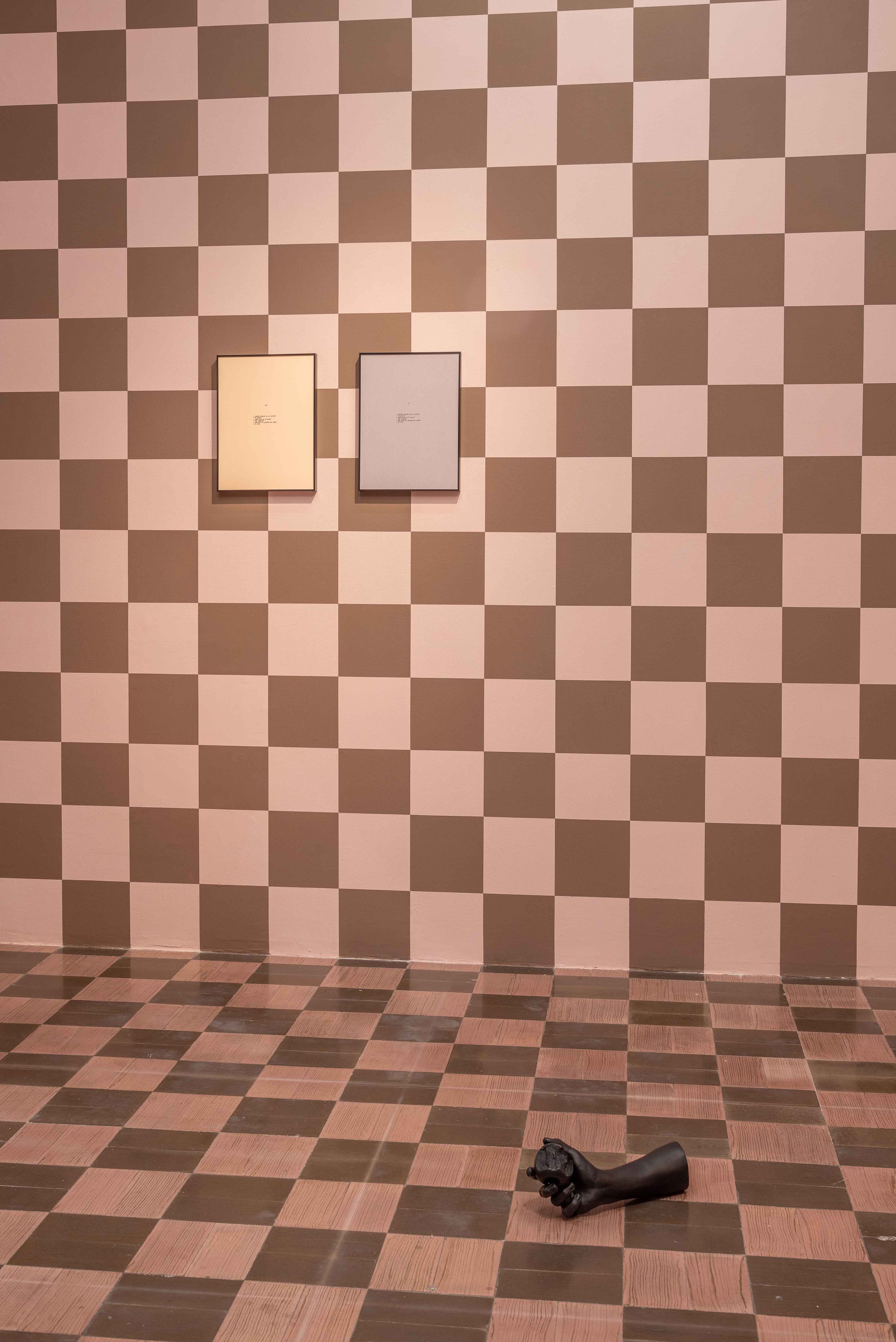 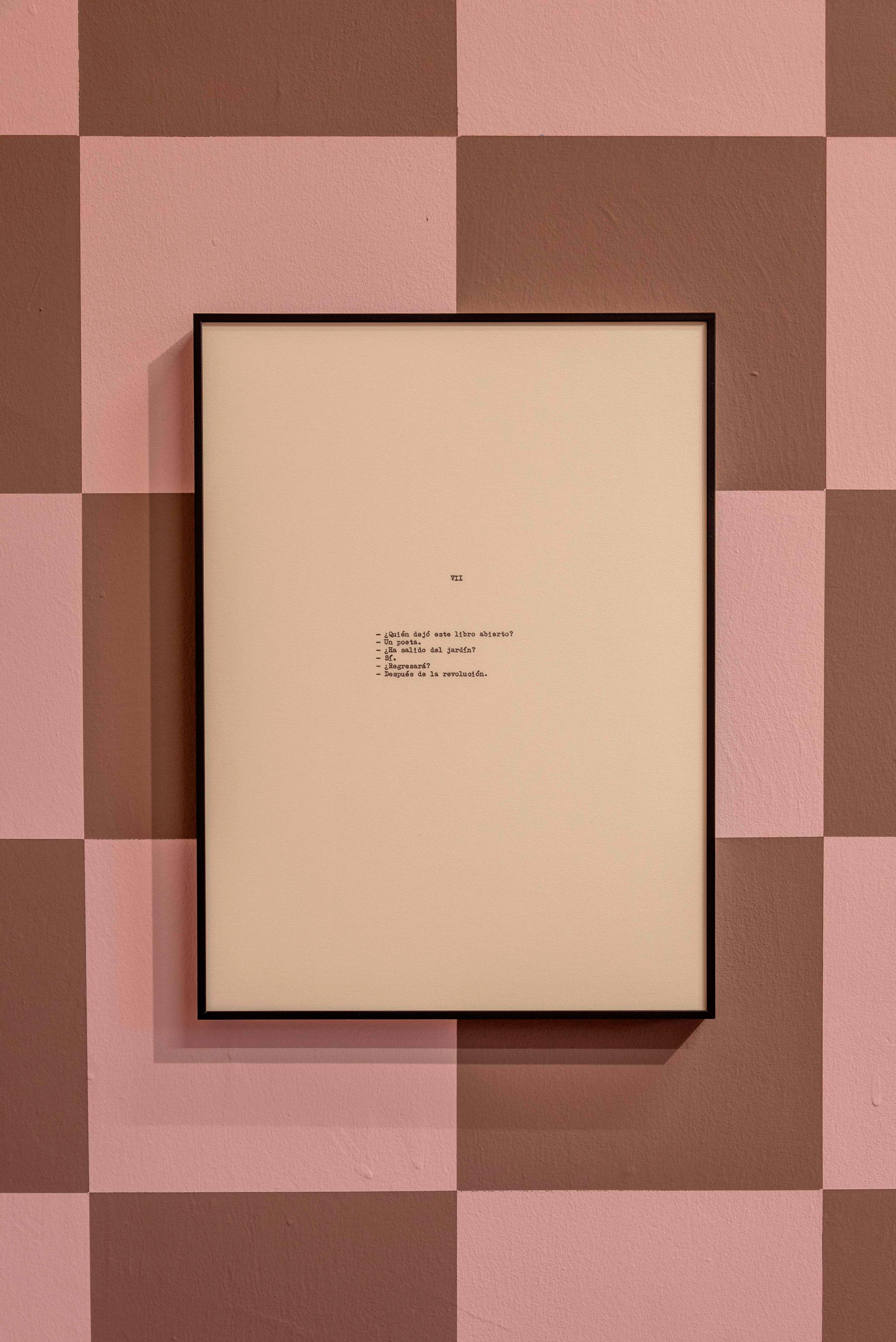 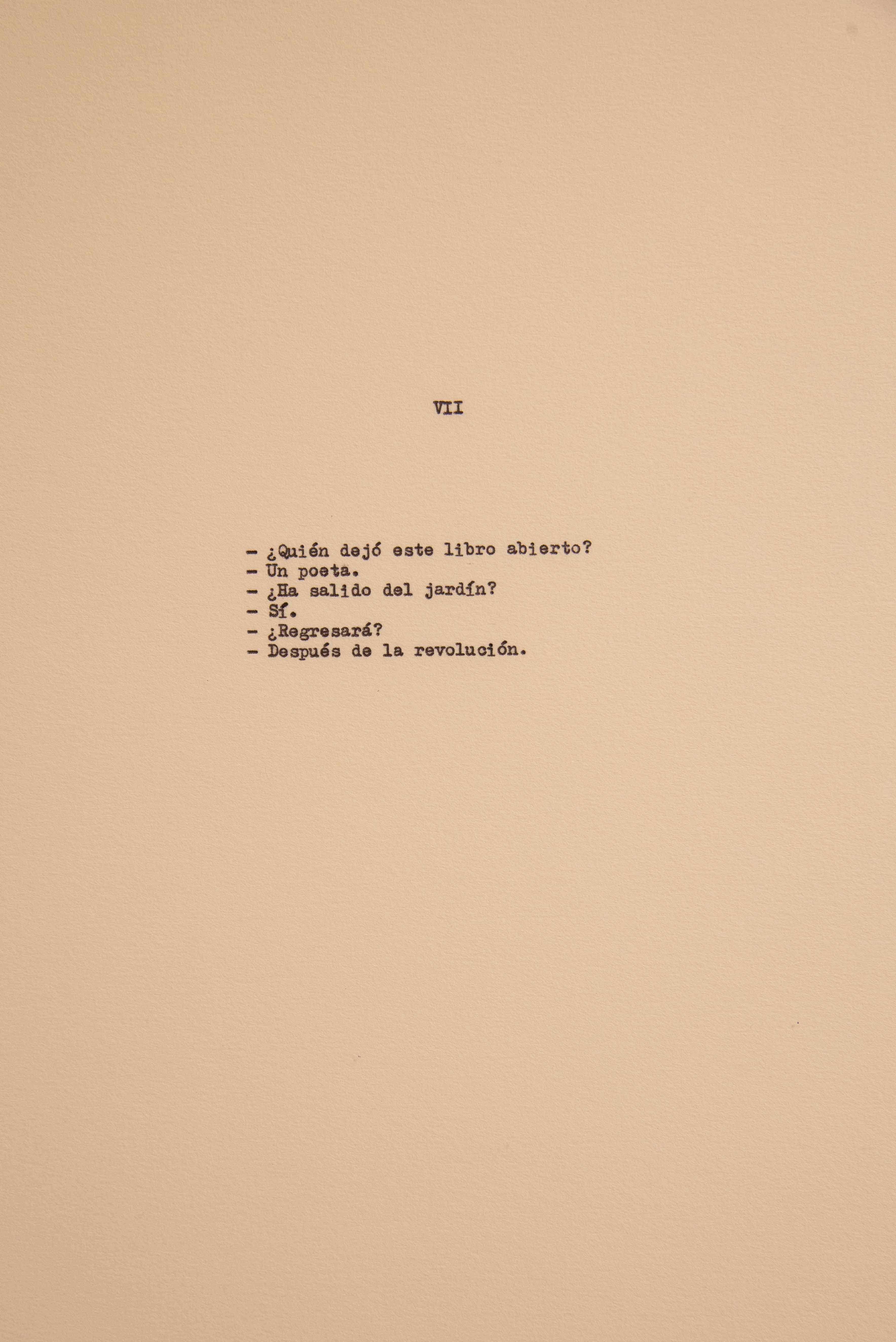 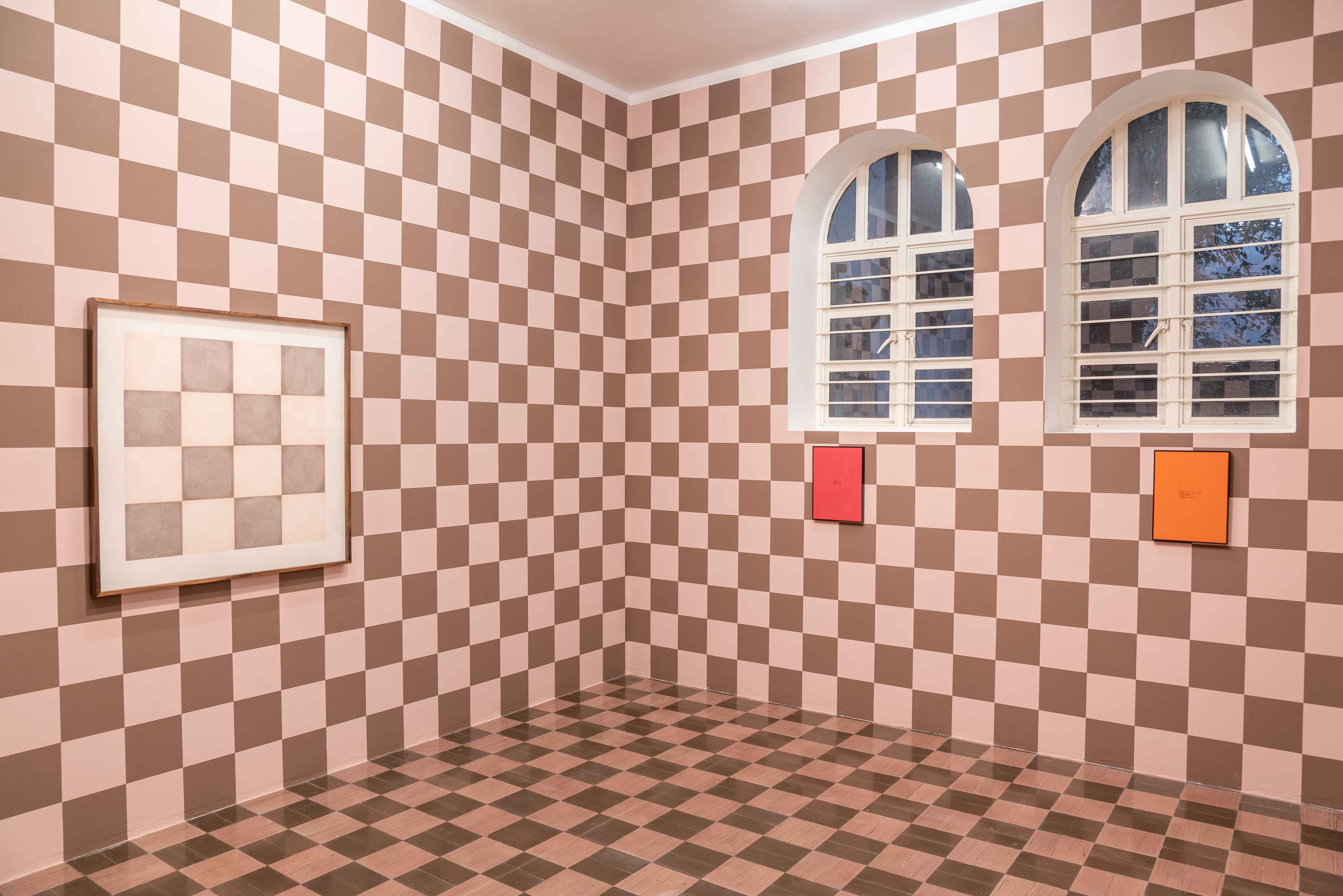 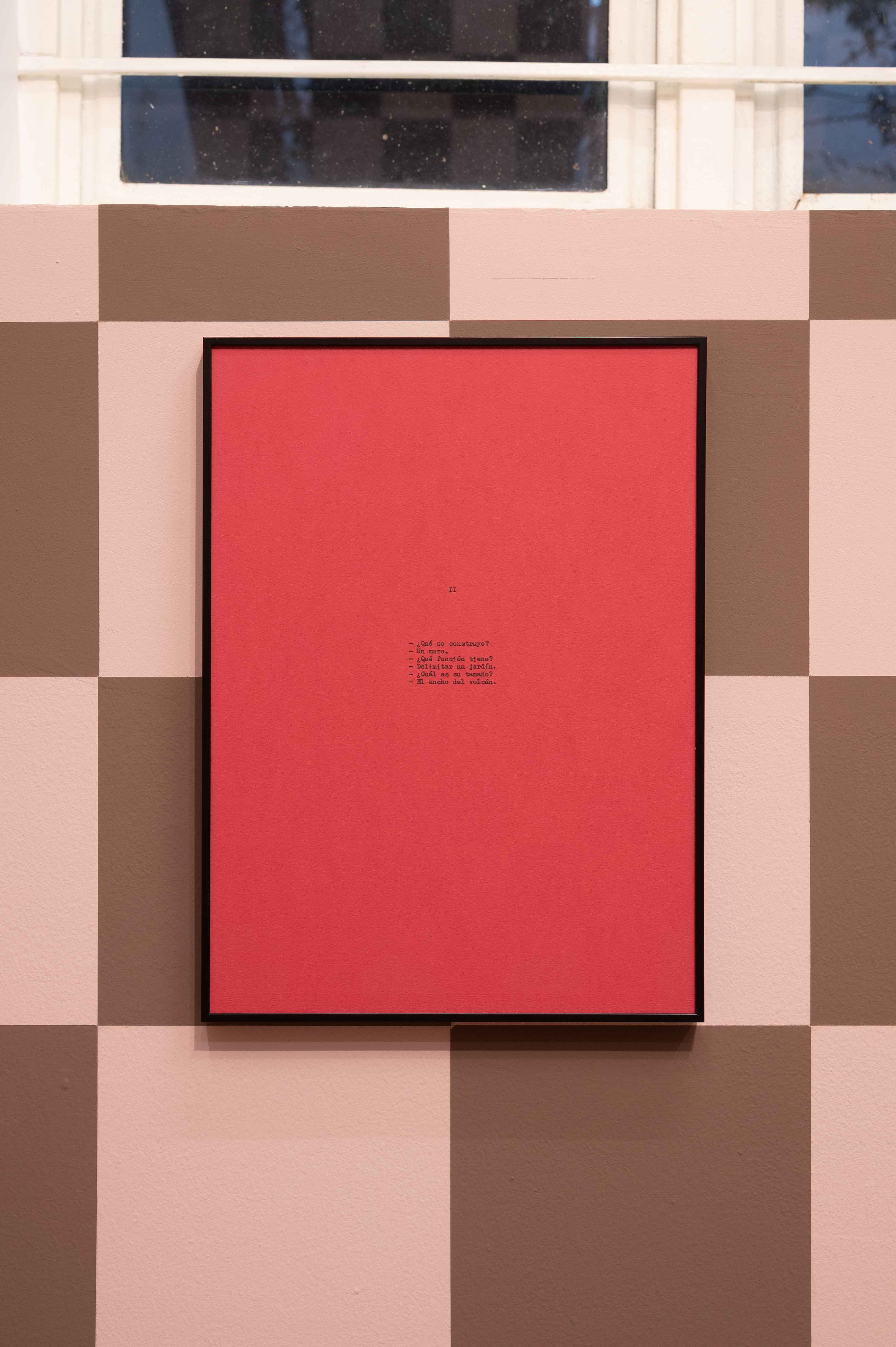 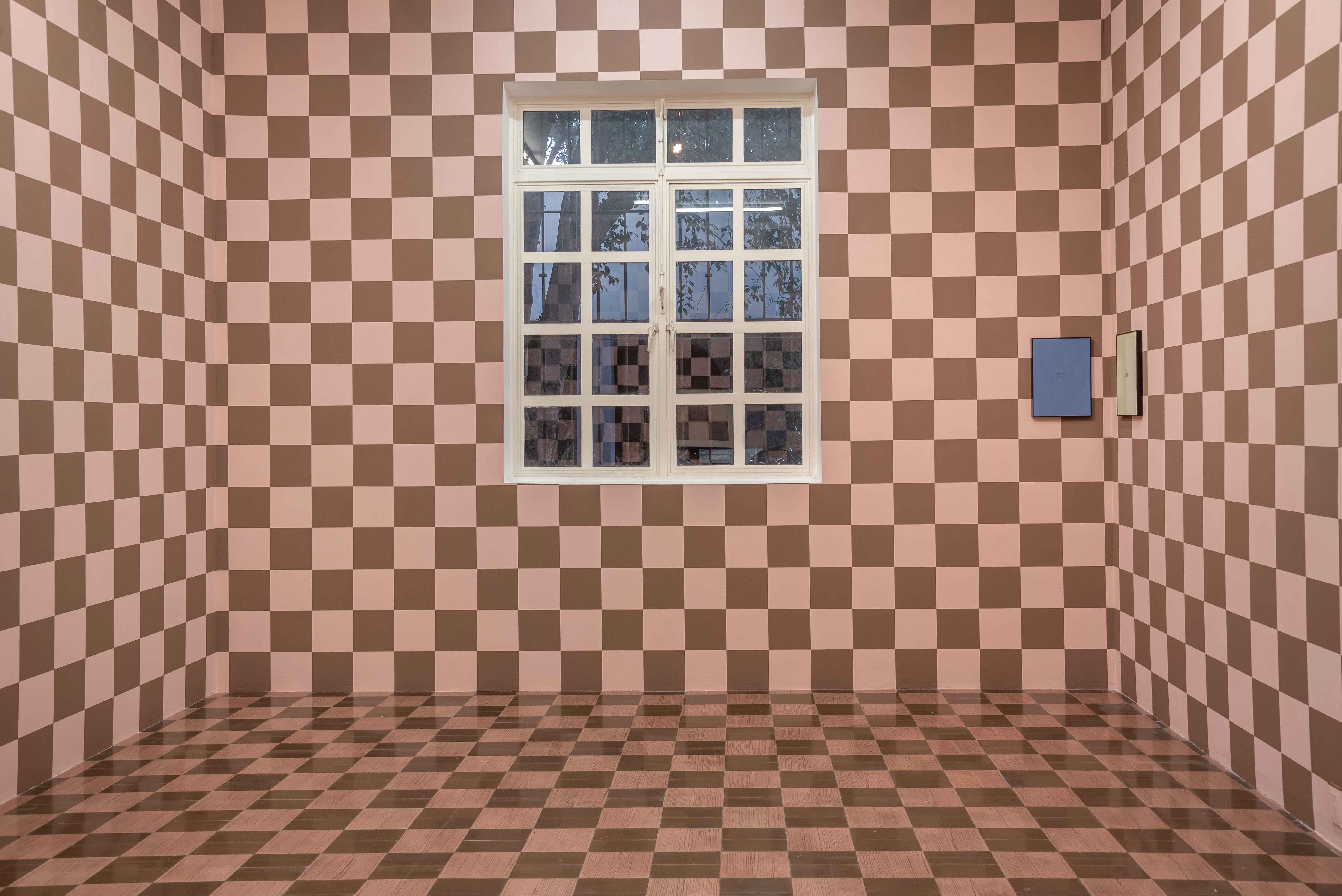 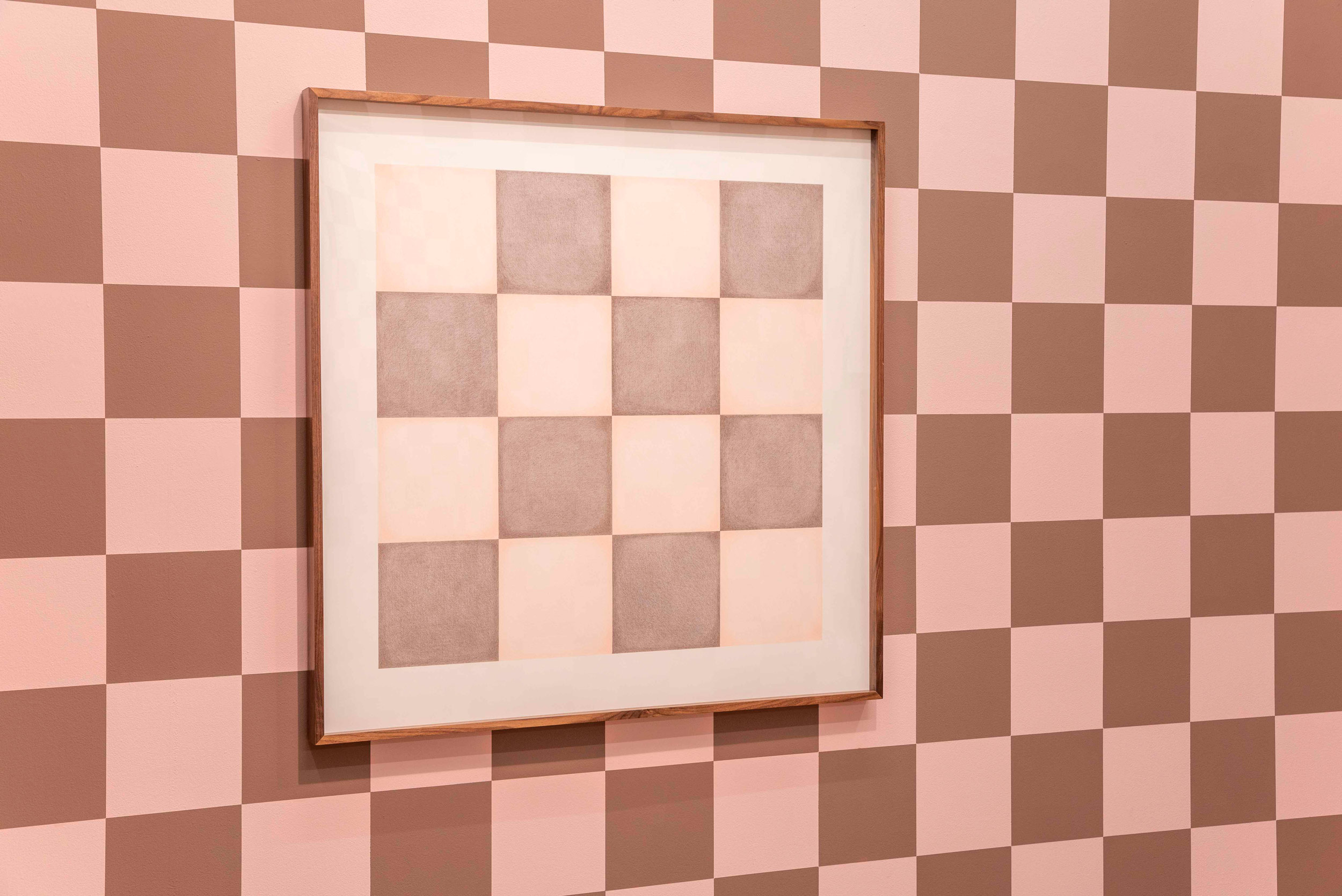 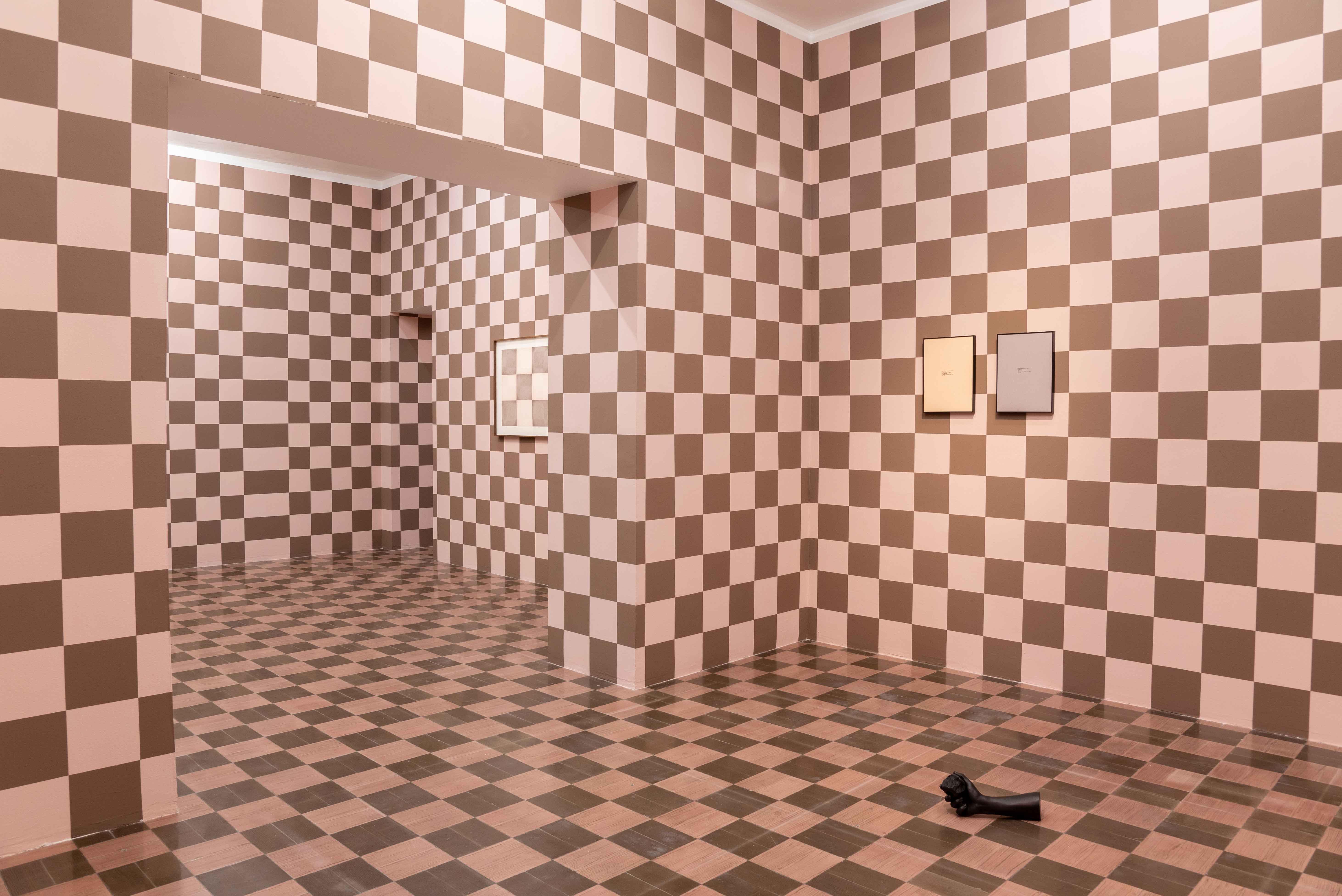 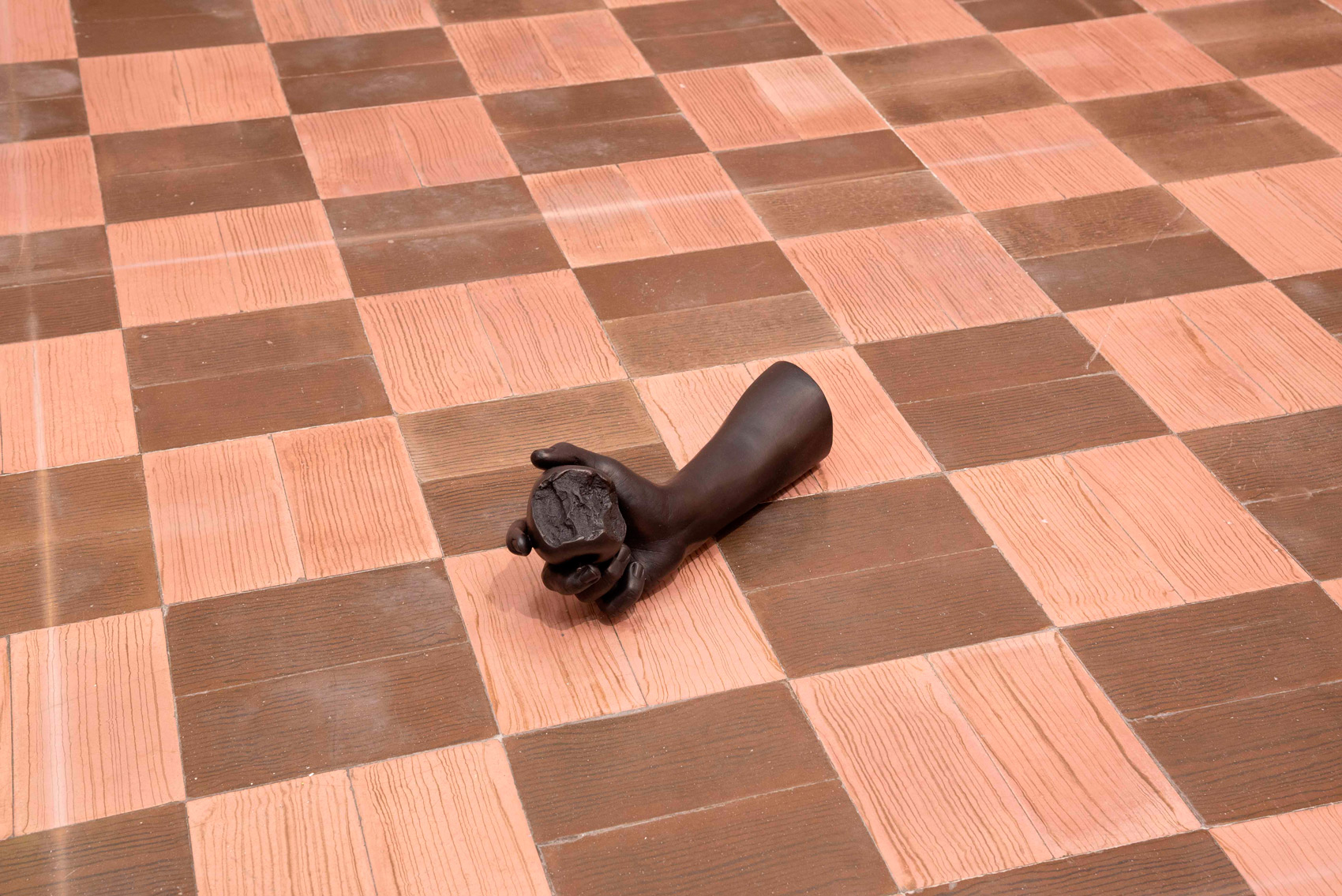 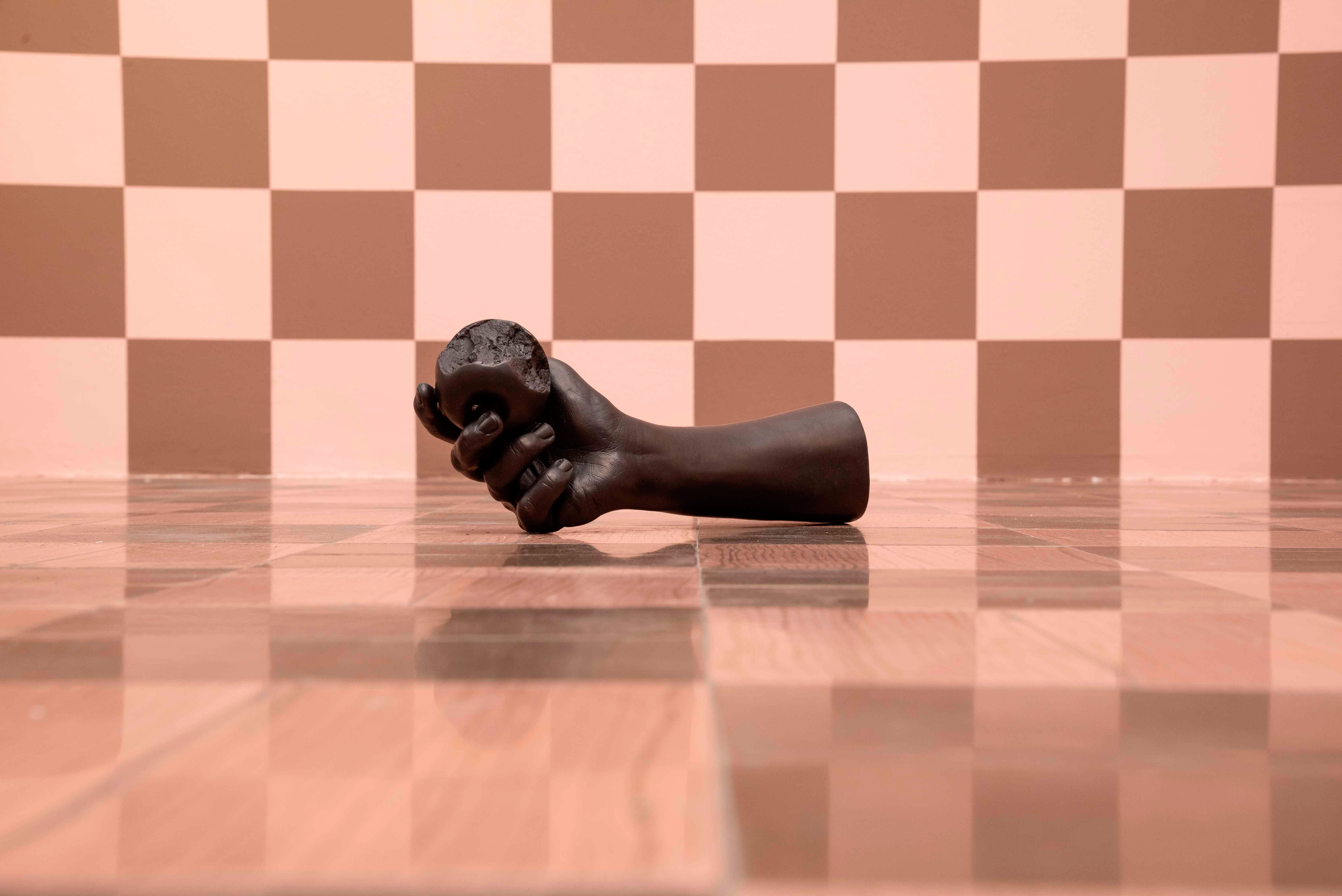 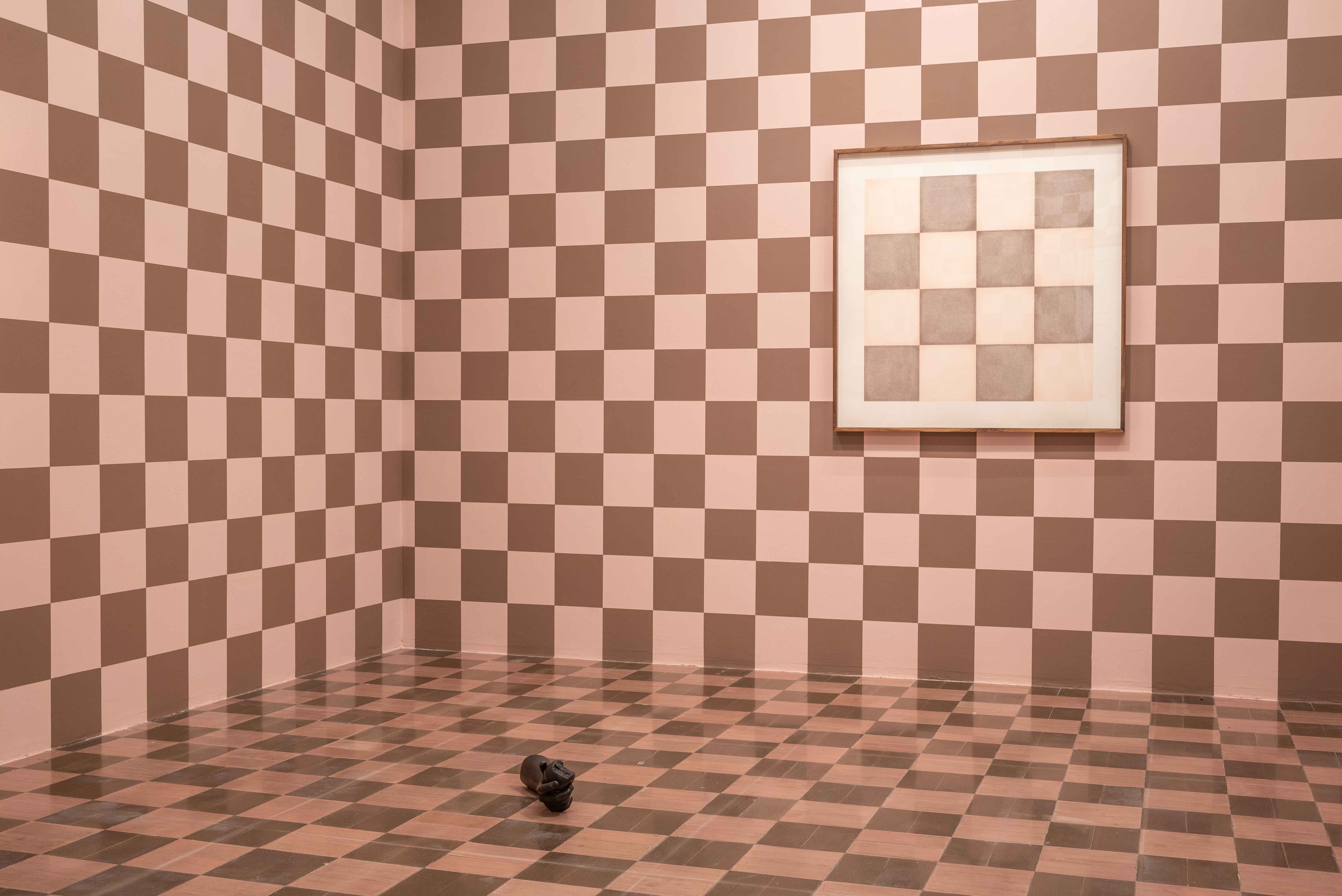 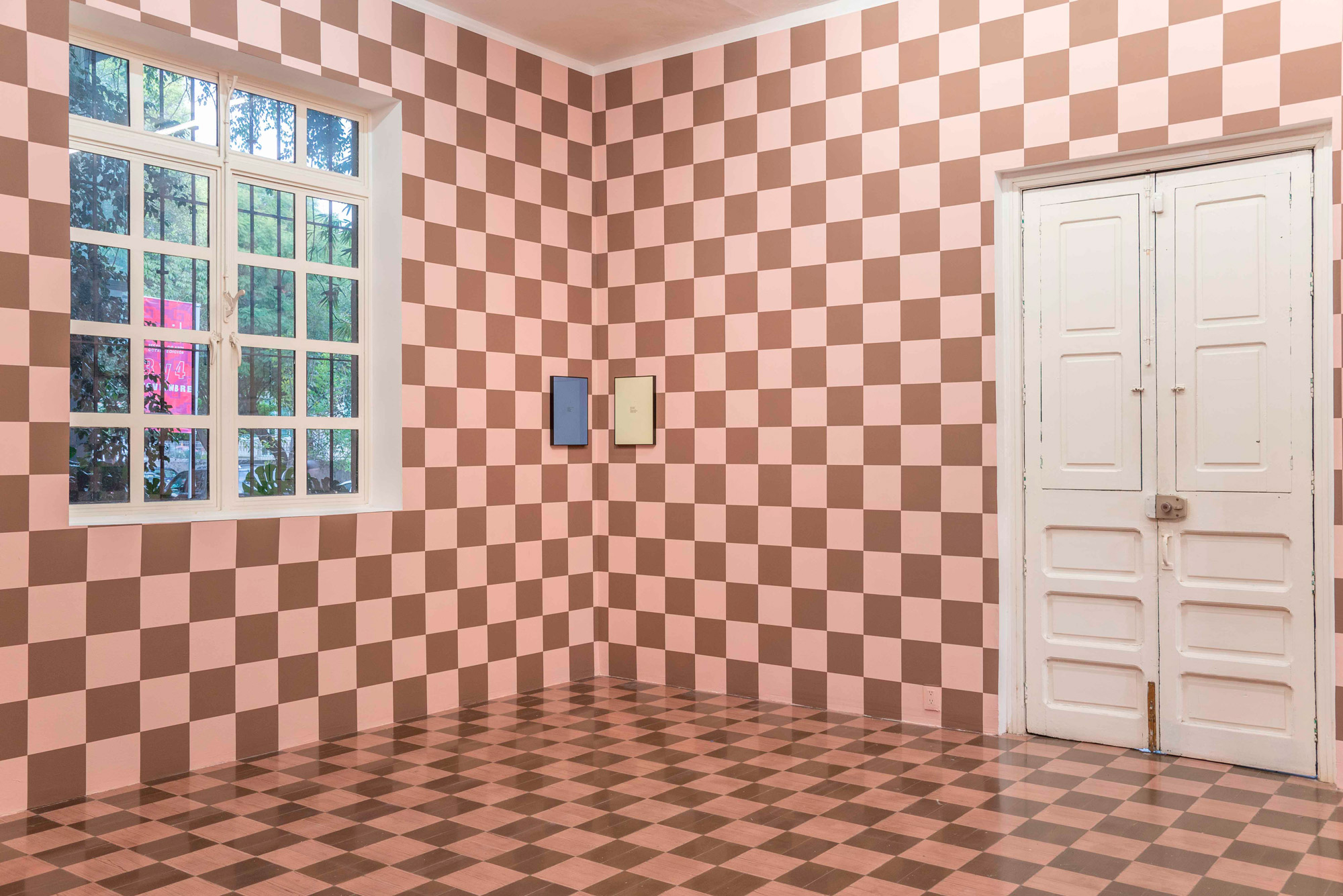 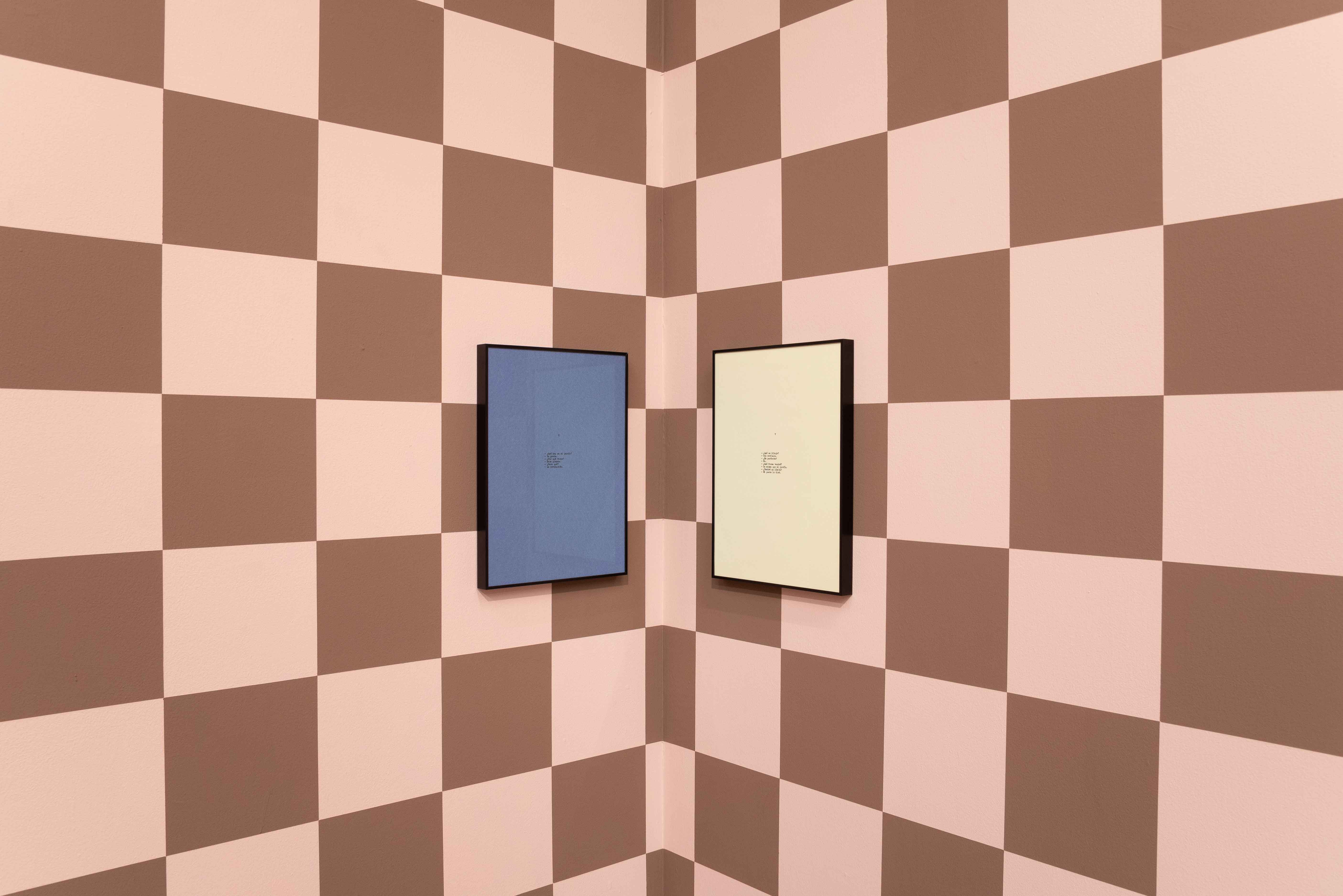 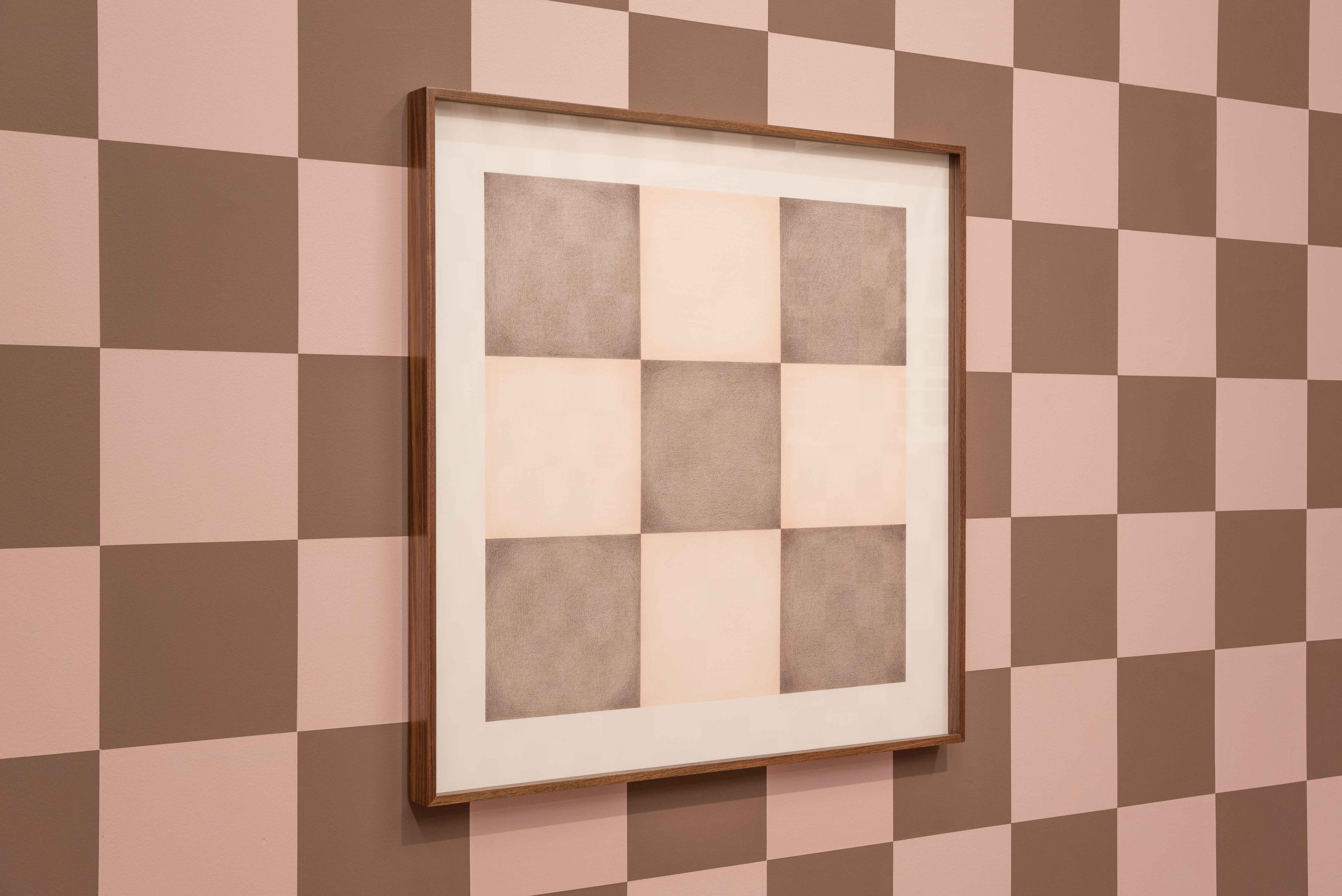 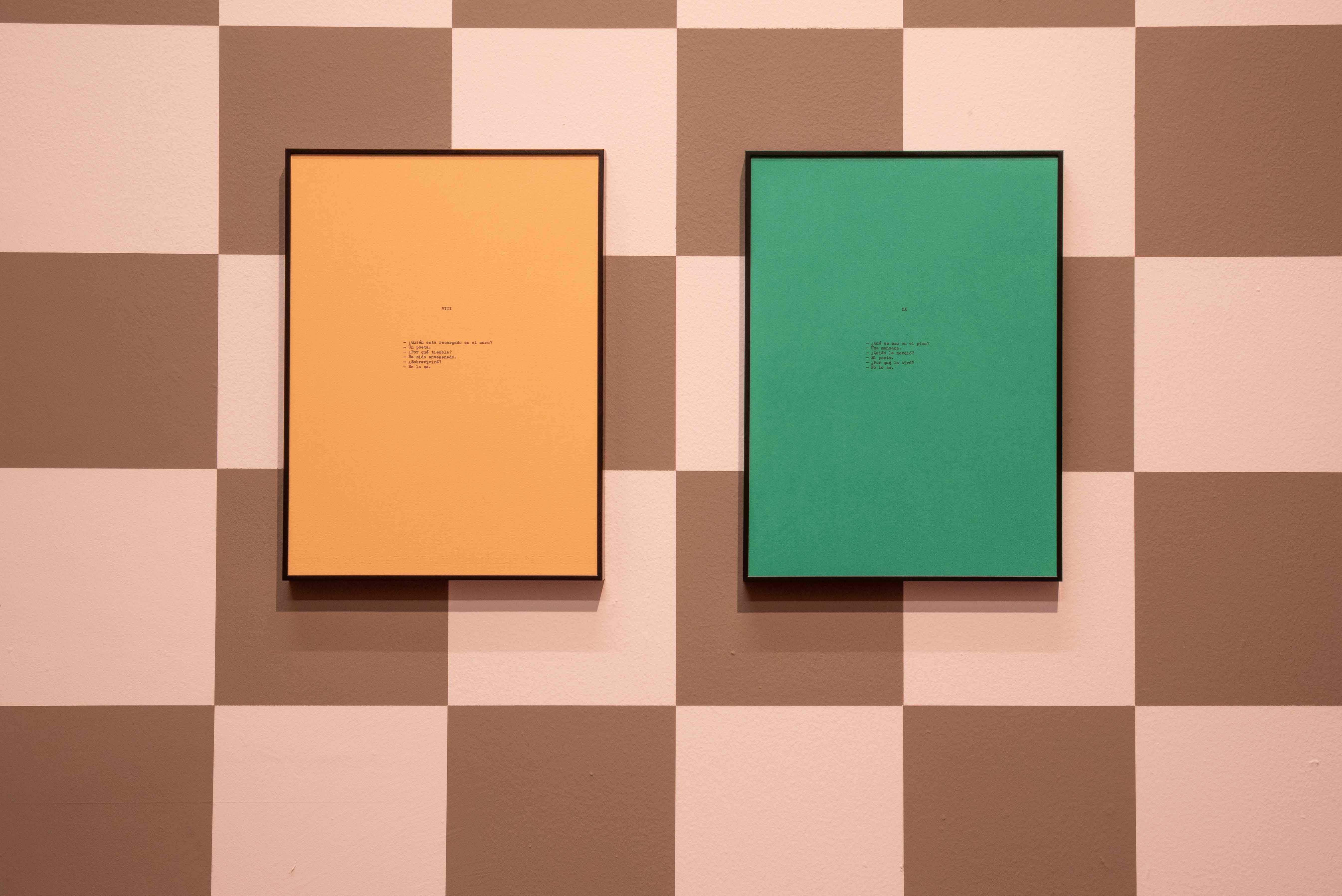 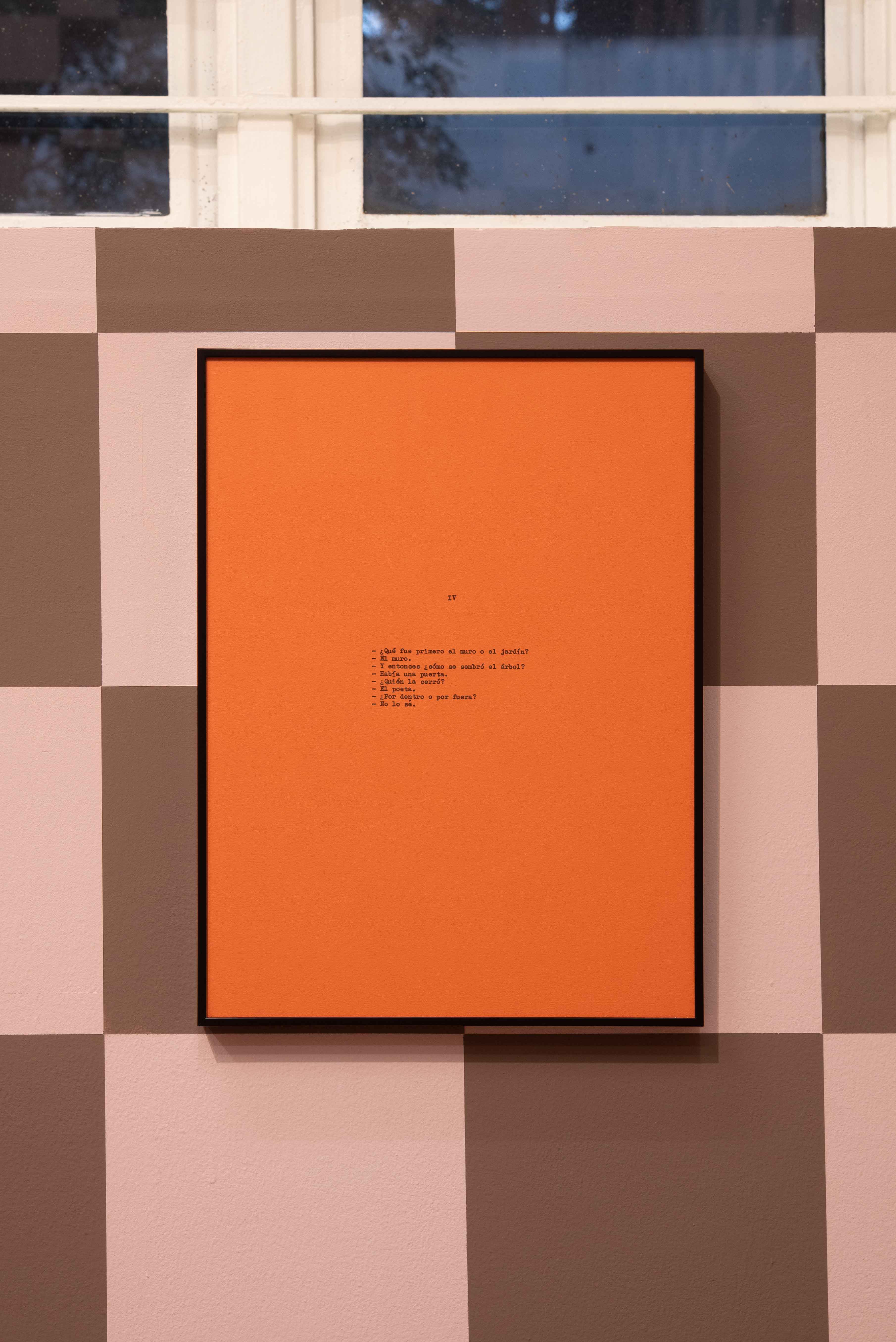 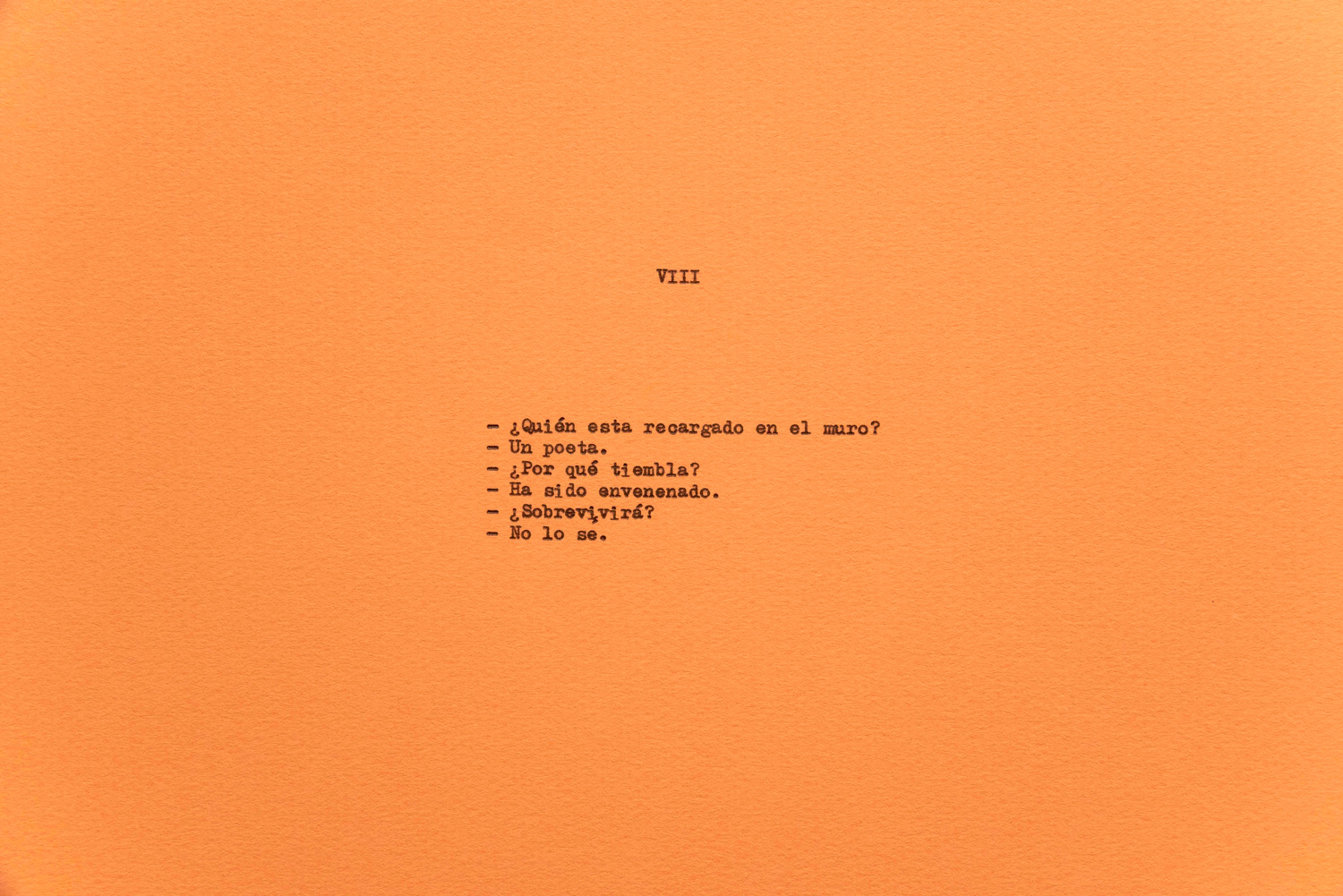 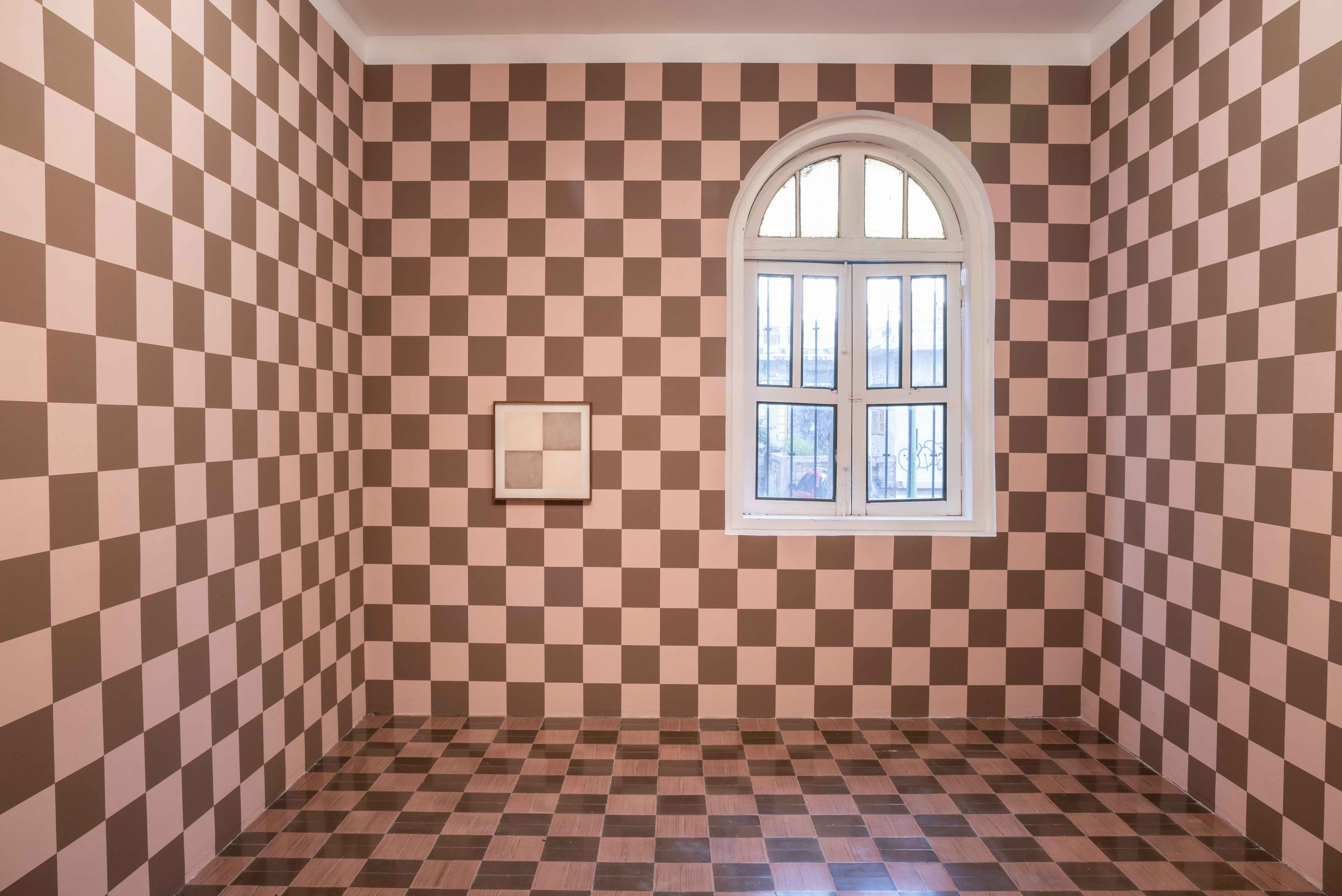 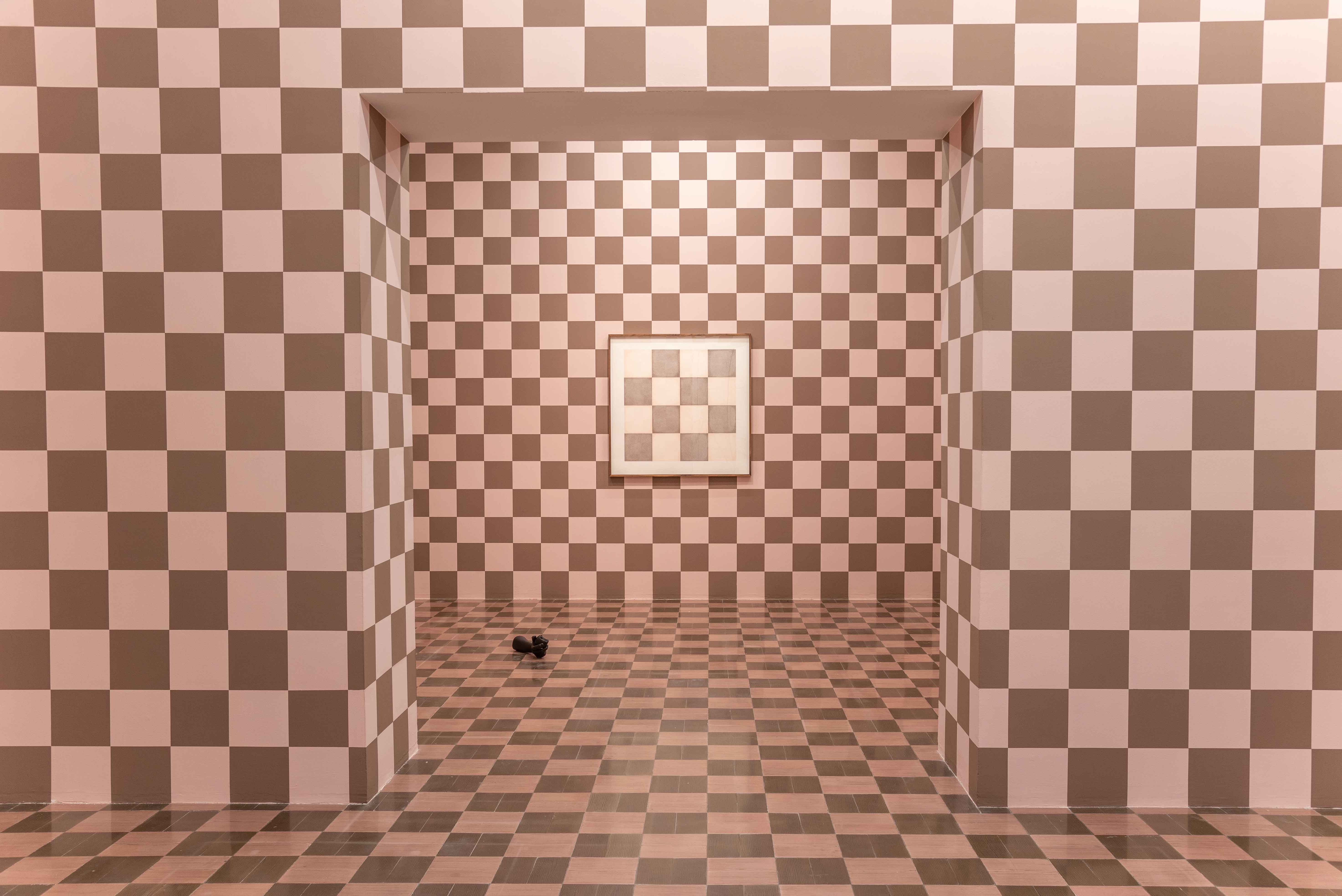 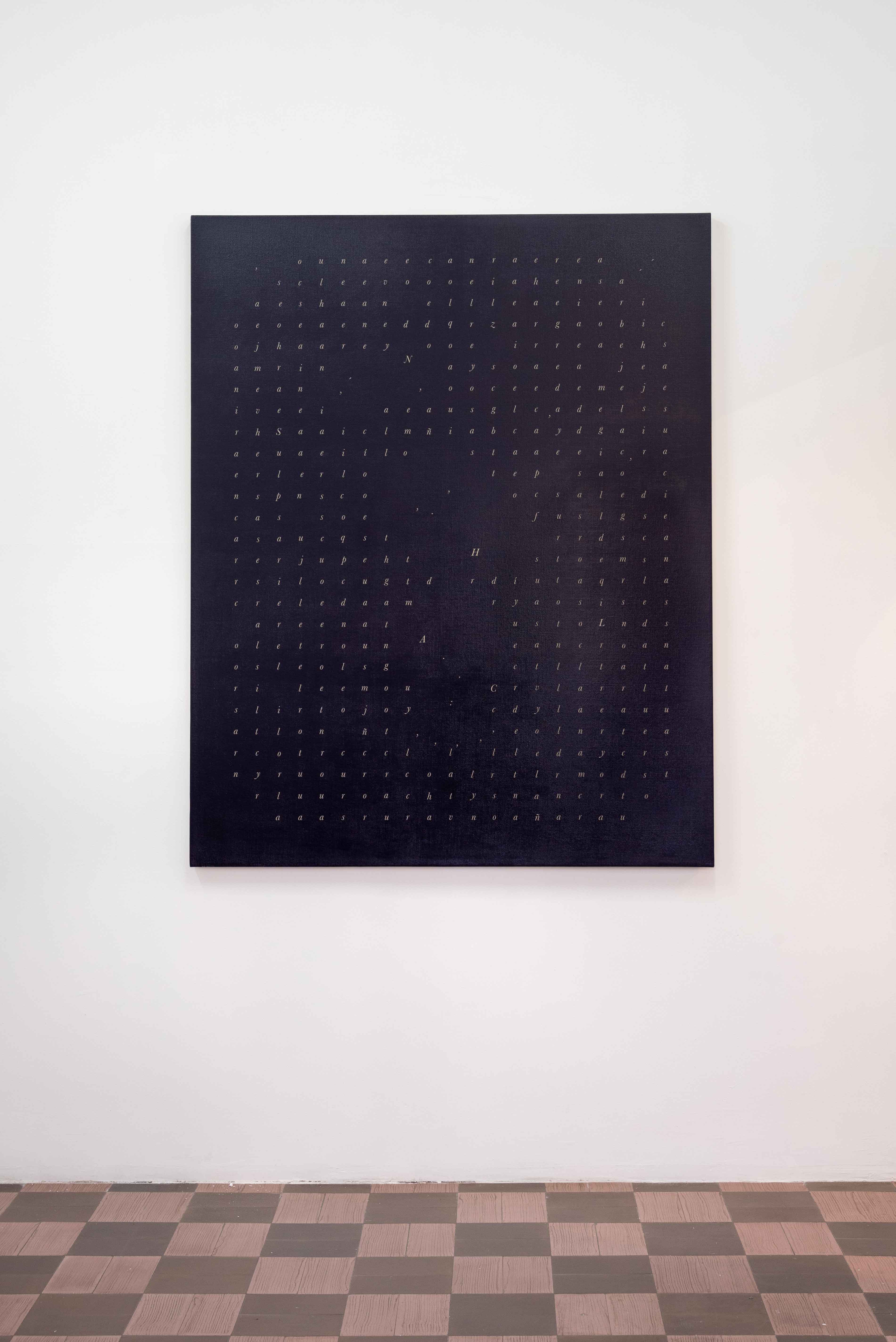 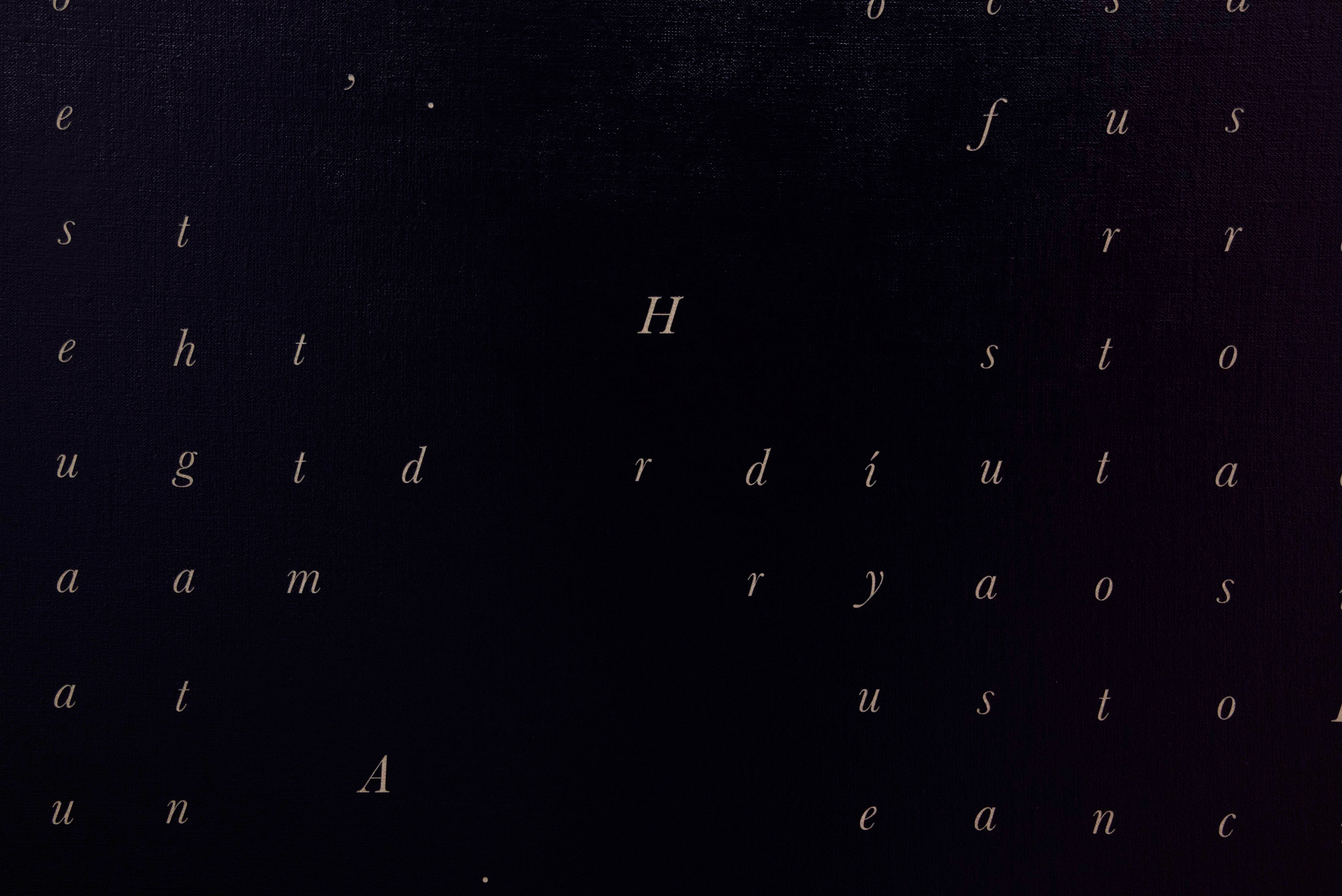 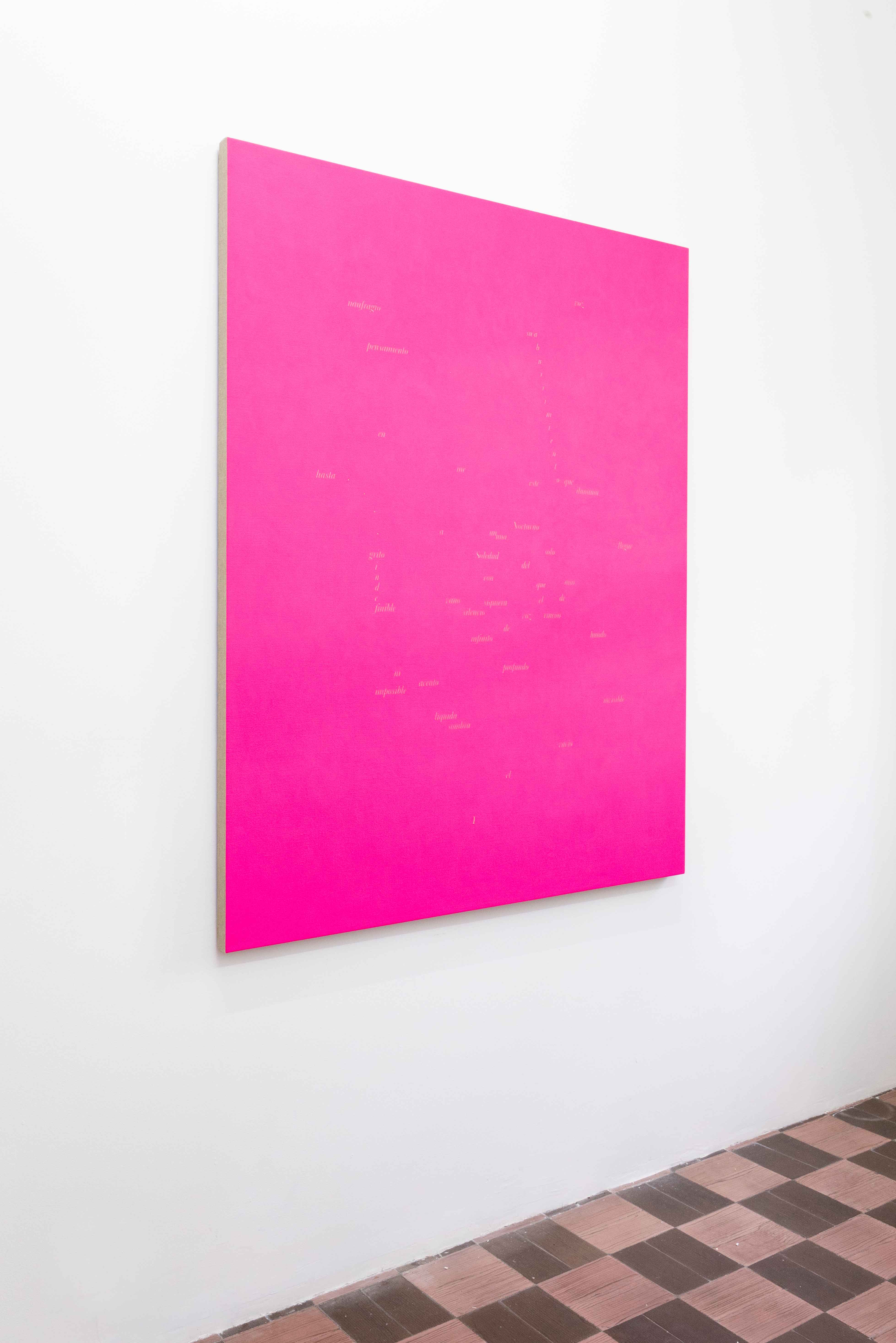 This exhibition originates from an archive image: The architect Luis Barragán eats an apple while taking a walk through the site that will later be known as the “El Pedregal” residential complex in Mexico City. The image shows an indefinite landscape made out of volcanic rock, eventually it will be covered up and delimitated with concrete walls and other construction materials. The photo shows a primeval land, a newly discovered Garden of Eden. The apple, a Western symbol of fresh beginnings (good or bad), functions as a certain poetic premonition that resonates along with the fertility of the volcanic soil.

Jorge Méndez Blake creates a timeless bridge between the modernist seedlings that Barragán planted within his volcanic garden in the 1940’s and one of his first residential projects in Guadalajara, the Casa Franco built in 1929. The artist uses the checkerboard design of the original floor of this house and reproduces it through the walls of the residence and as a departure point for other works of tautological nature.

The checkerboard pattern used for flooring has a great and long tradition within the arts. Of the 31 paintings that have been attributed to the Dutch painter Johannes Vermeer, 13 of them show checkerboard floors. Pieter de Hooch also painted this motive repeatedly in works that depicted everyday life scenes of the XVII century. Some historians have argued that there is a representational mistake in these paintings, in the way they displayed the interior of these proto-bourgeois households in Holland and the rest of Europe.

The checkerboard flooring was normally executed with black and white marble tiles, which could only be afforded by the aristocracy and the church. Vermeer and de Hooch probably reproduced in their paintings the flooring of the New Church of Delft. The gridded floor came to represent in the pictorial realm the ultimate challenge for representing perspective and creating two-dimensional compositions with depth. Using this kind of flooring guaranteed that these architectural spaces would be portrayed with great precision and detail.

The grid produced by the checkerboard floor not only suggests an order and a certain disposition of things, it also implies the existence of a content. The grid is “inhabited” by opposite forces (thus complementary). A pattern is a way to ensure the correspondence between a group of elements, therefore proportions are consistent and can be represented in a variety of contexts. Creating a grid is a way to assuring the possibility of indefinite repetition. Whatever thing that is located within the grid can be replicated afterwards preserving its original characteristics. A clear example of this are the Persian gardens that have been designed following the chahar bagh pattern (square shaped gardens, that are sub-divided in four parts by ponds or passageways). This grid can be reproduced ad infinitum; it is the earthly materialization of a cosmovision that is translated as geometrical order, representing the four gardens of Paradise which is descripted in the Quran.

Another example of this is the hortus conclusus or “enclosed garden”, a popular pictorial motive throughout medieval Europe; in the same way as the chahar bagh this sort of garden implied the existence of a grid and a geometrical order; normally a fountain functioned as the center, and the rest of the garden was oriented based on this.

This exhibition brings together a series of possible scenarios and potential characters. The architect and the poet struggle in between praxis/action and contemplation. The garden is drawn and erased within a grid delimited by walls; extending itself, unfolding itself; creating bridges and closing doors. Barragan’s volcanic garden is now “enclosed” by the urban grid of Mexico City, a modern example of the hortus conclusus.