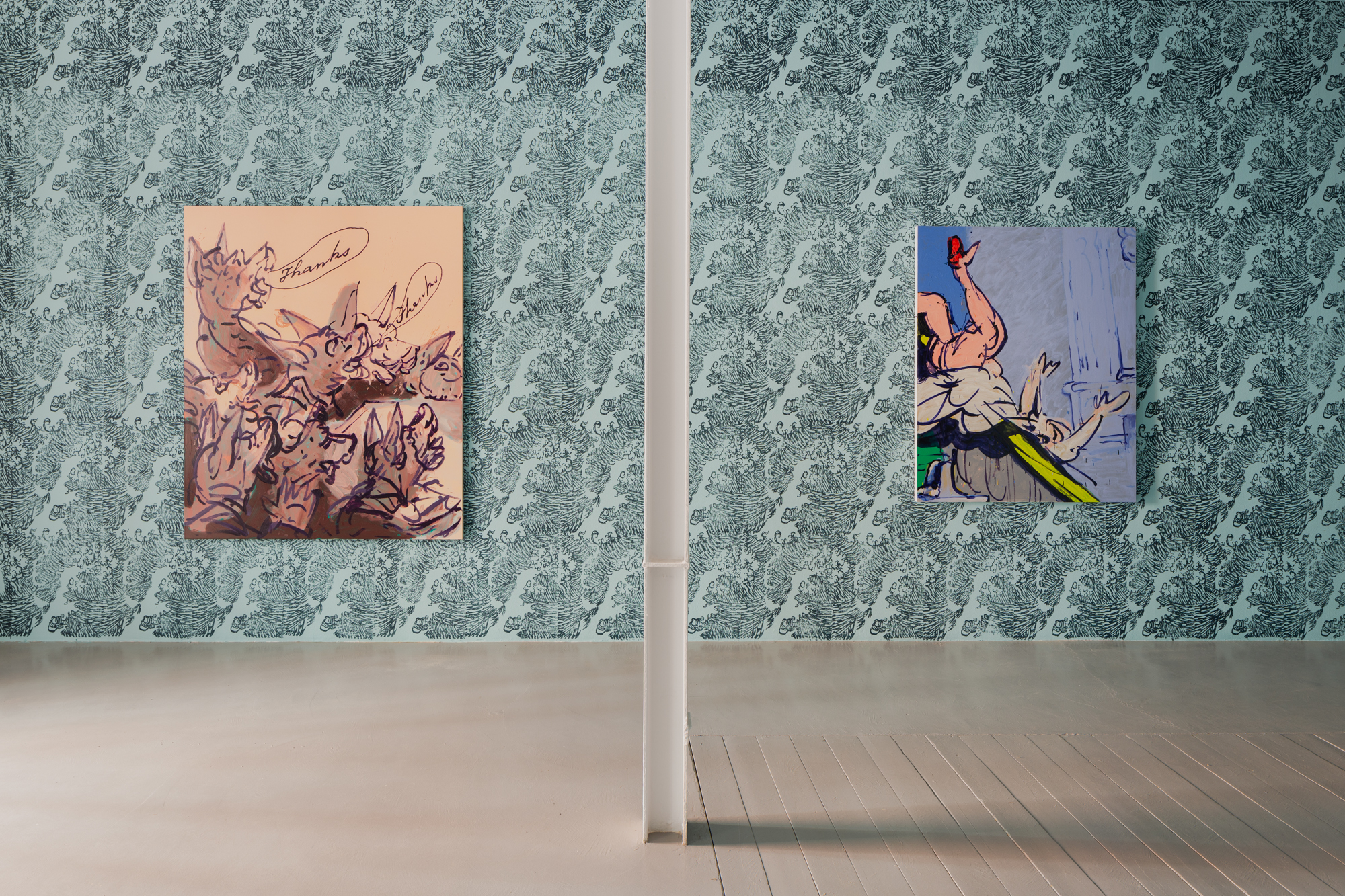 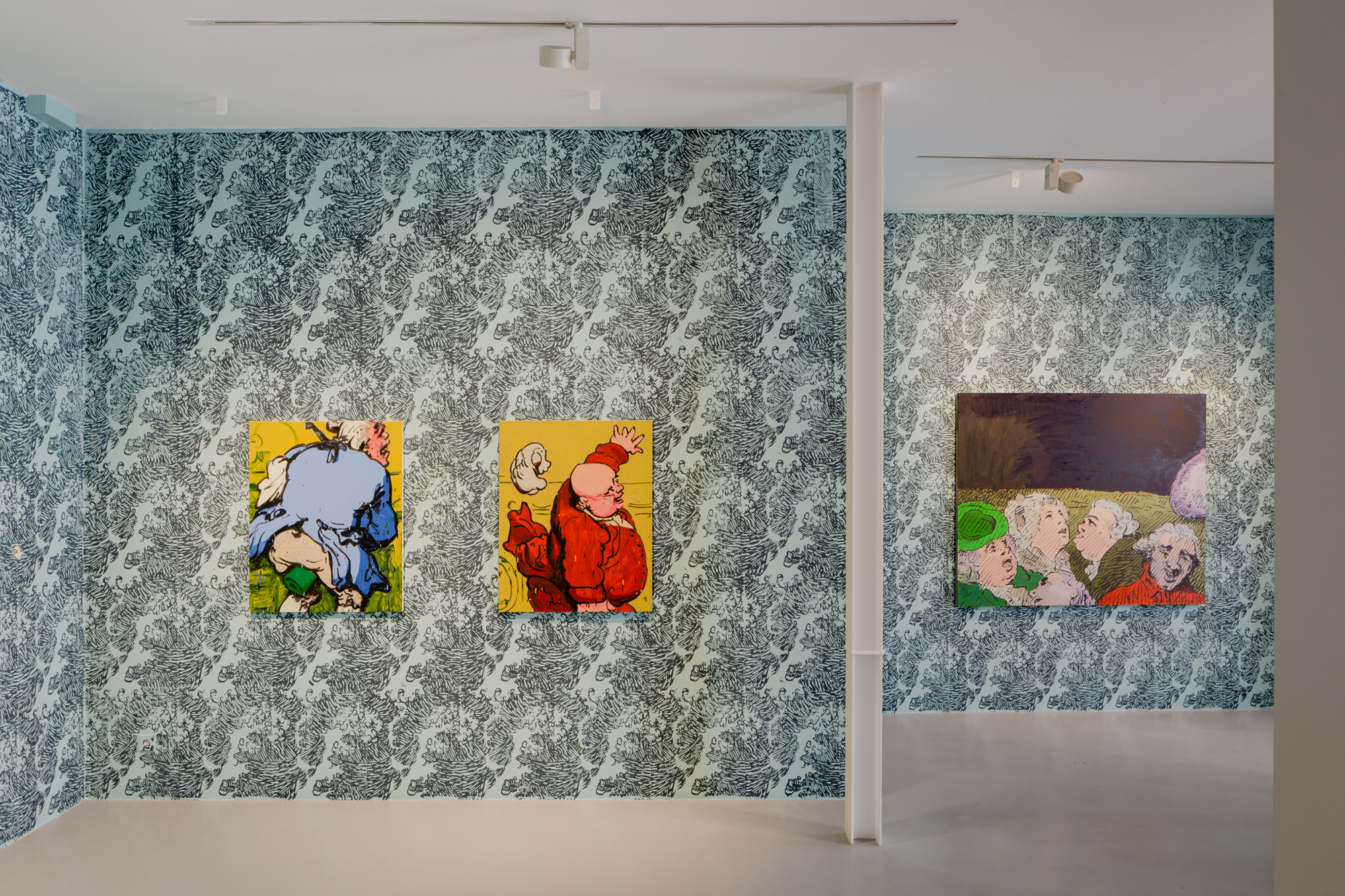 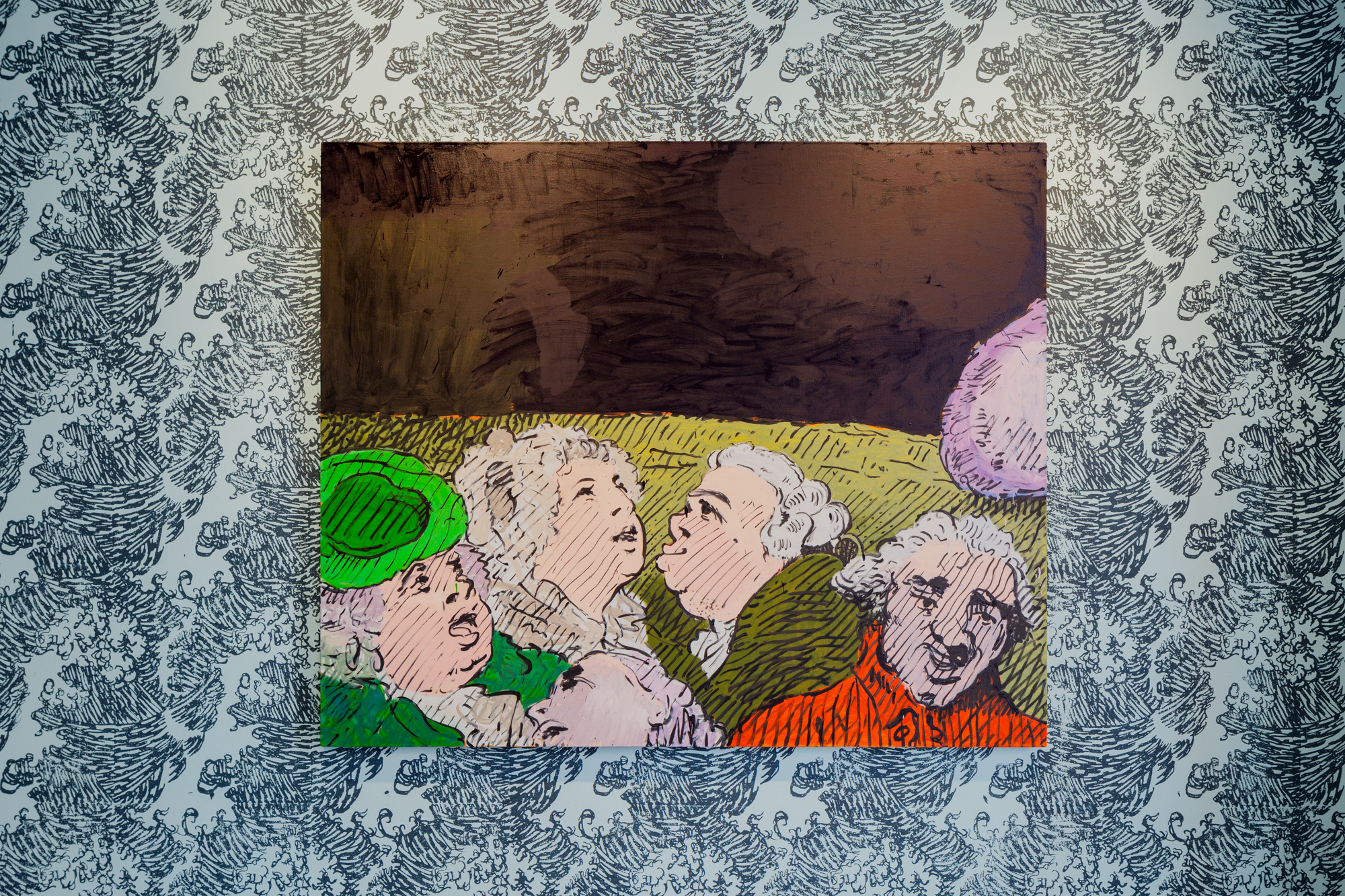 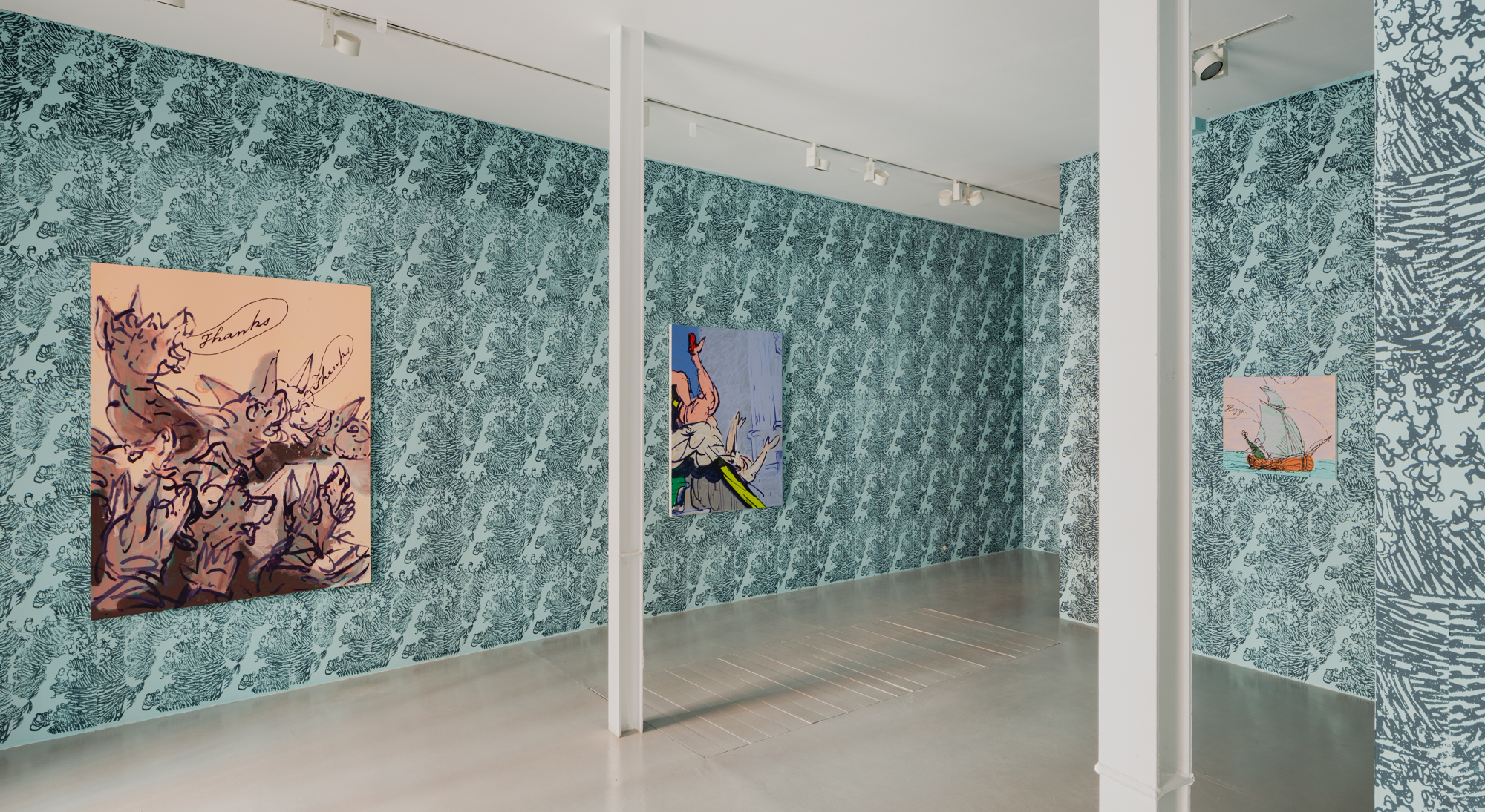 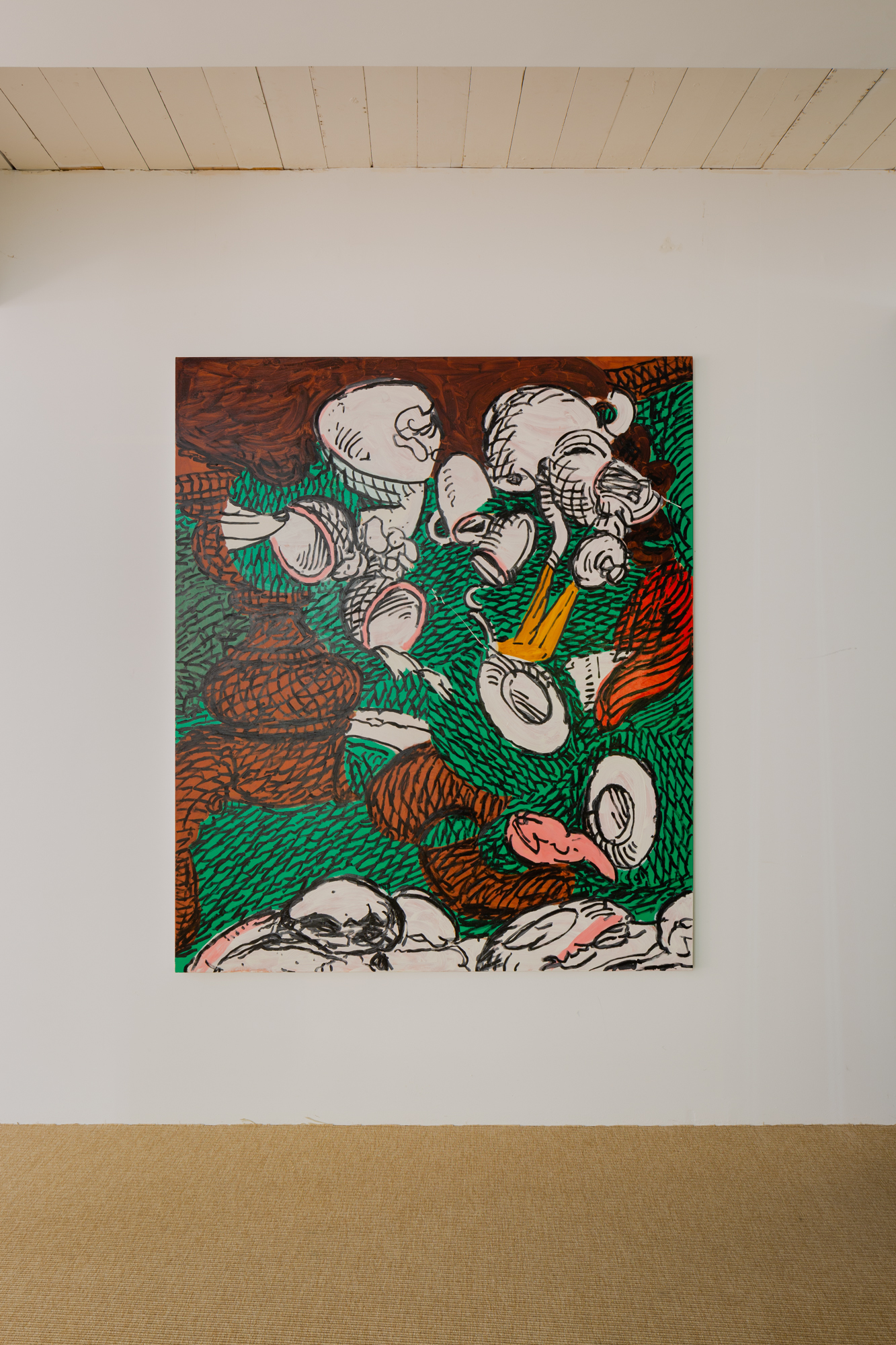 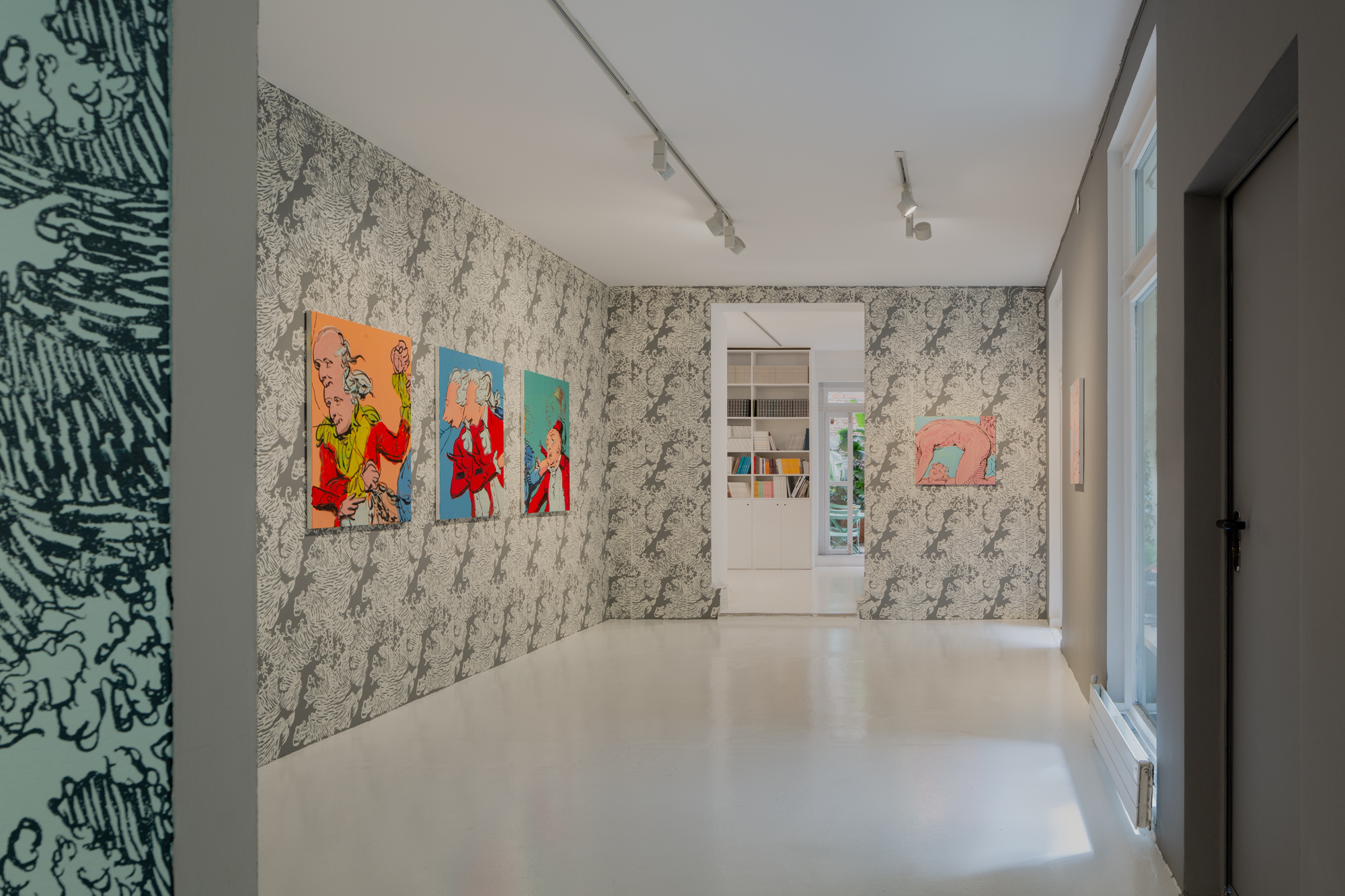 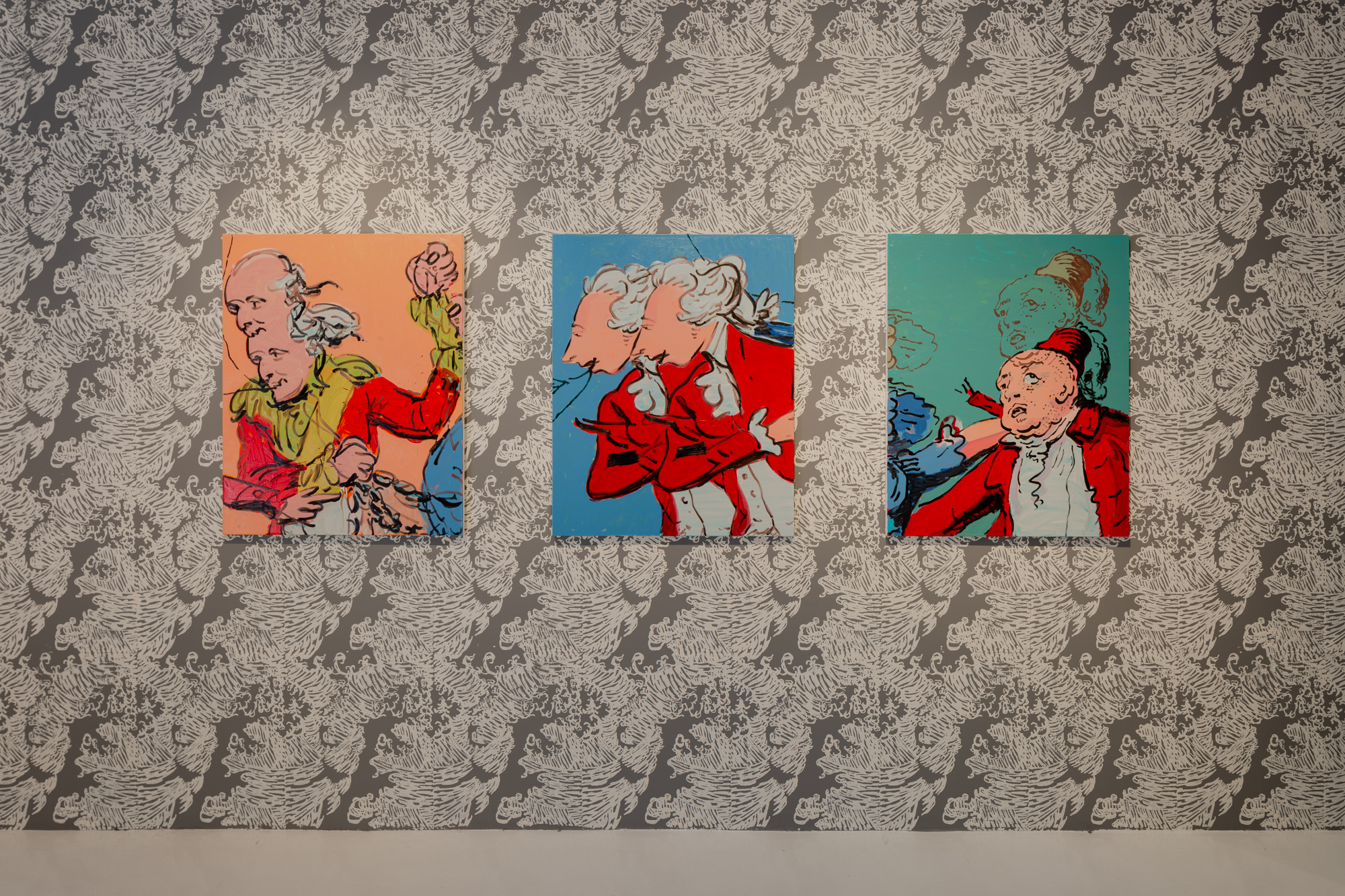 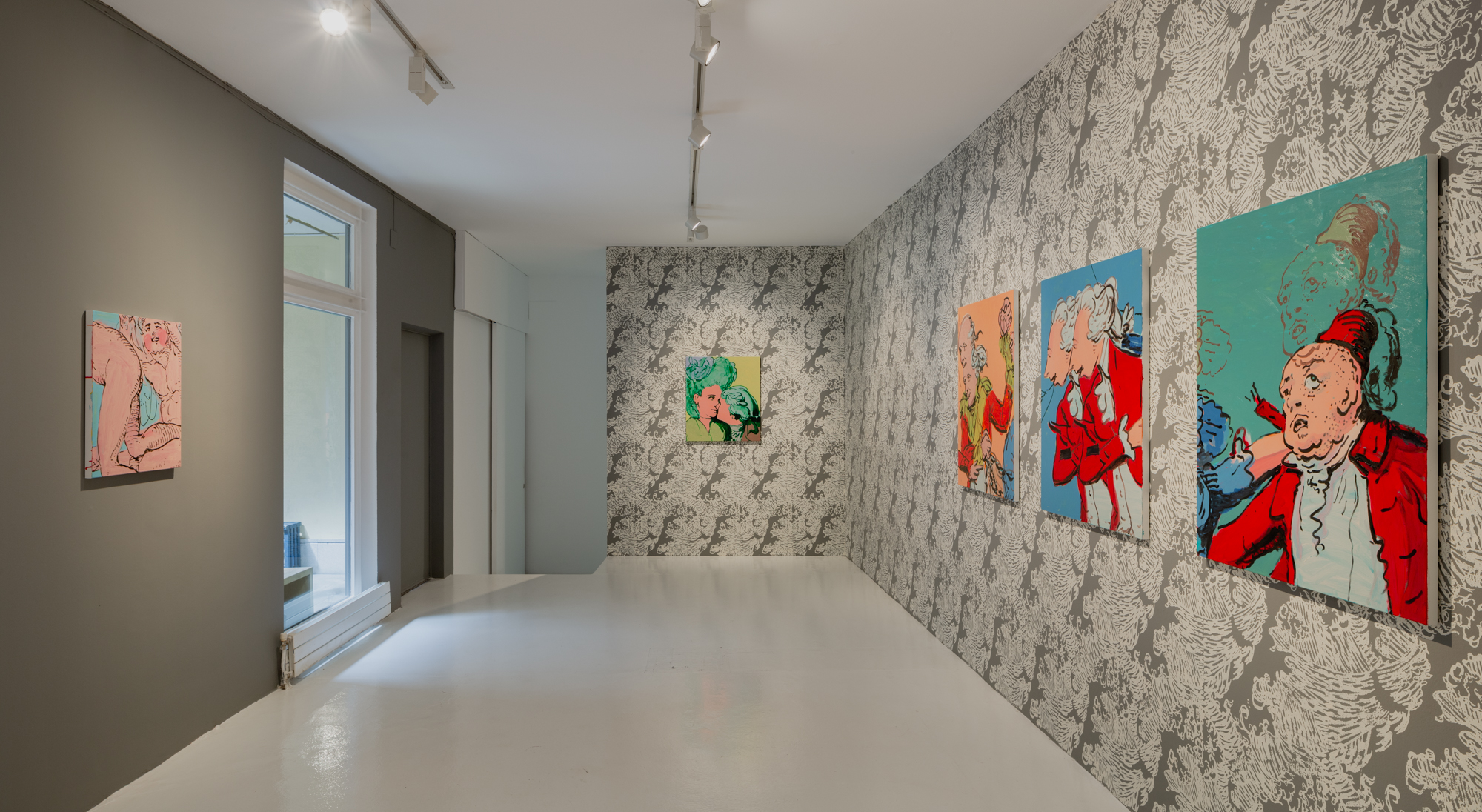 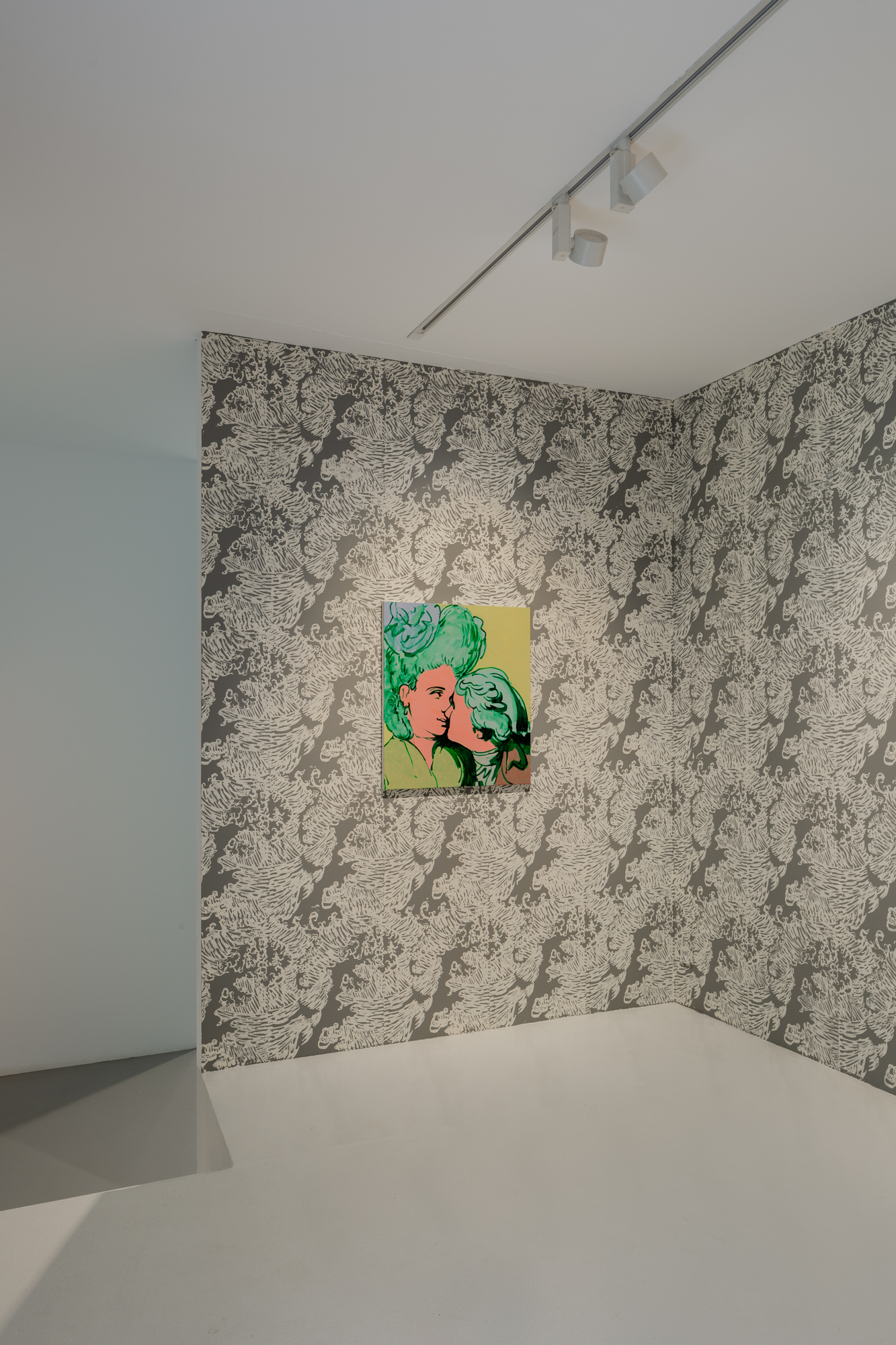 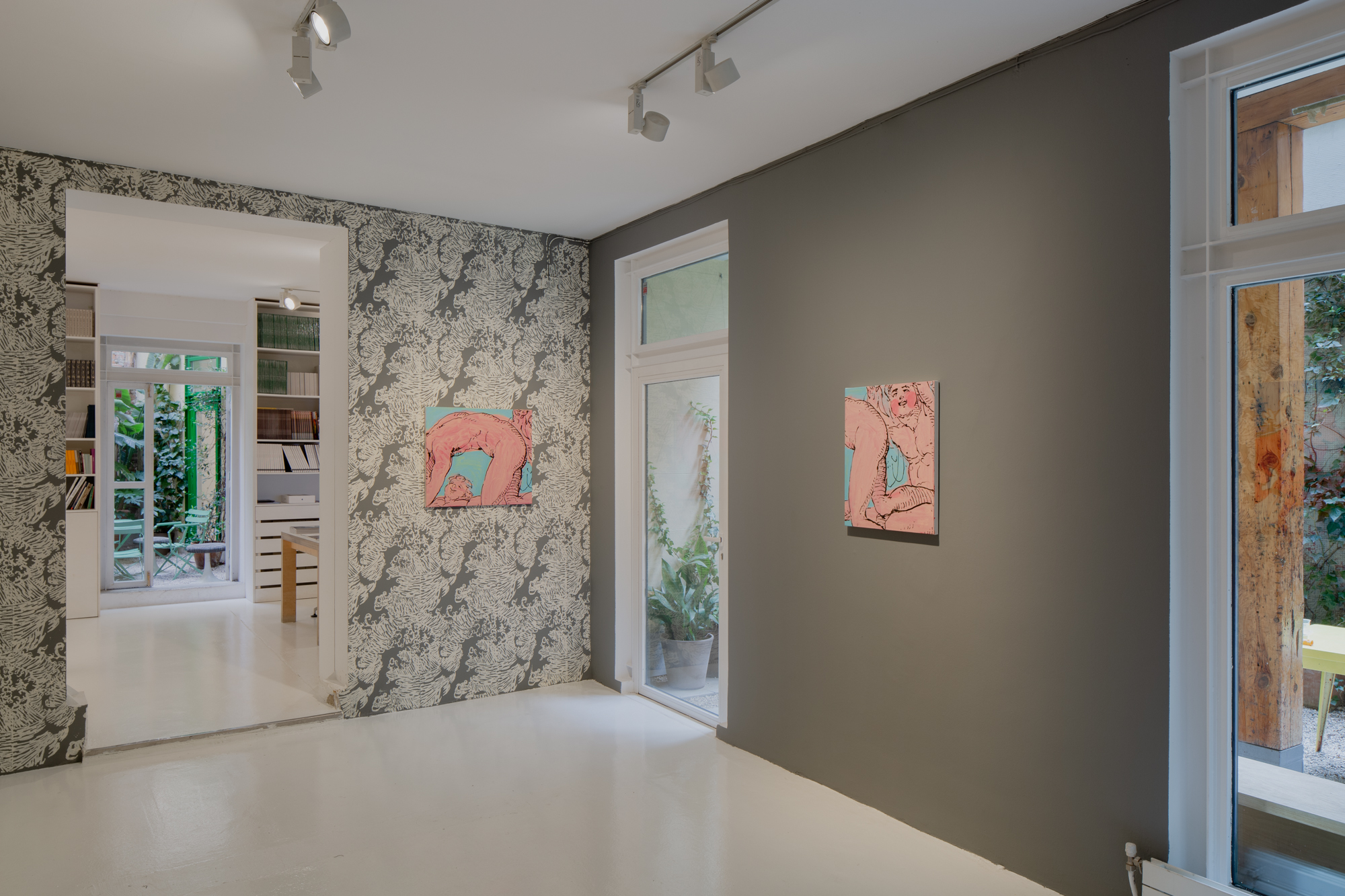 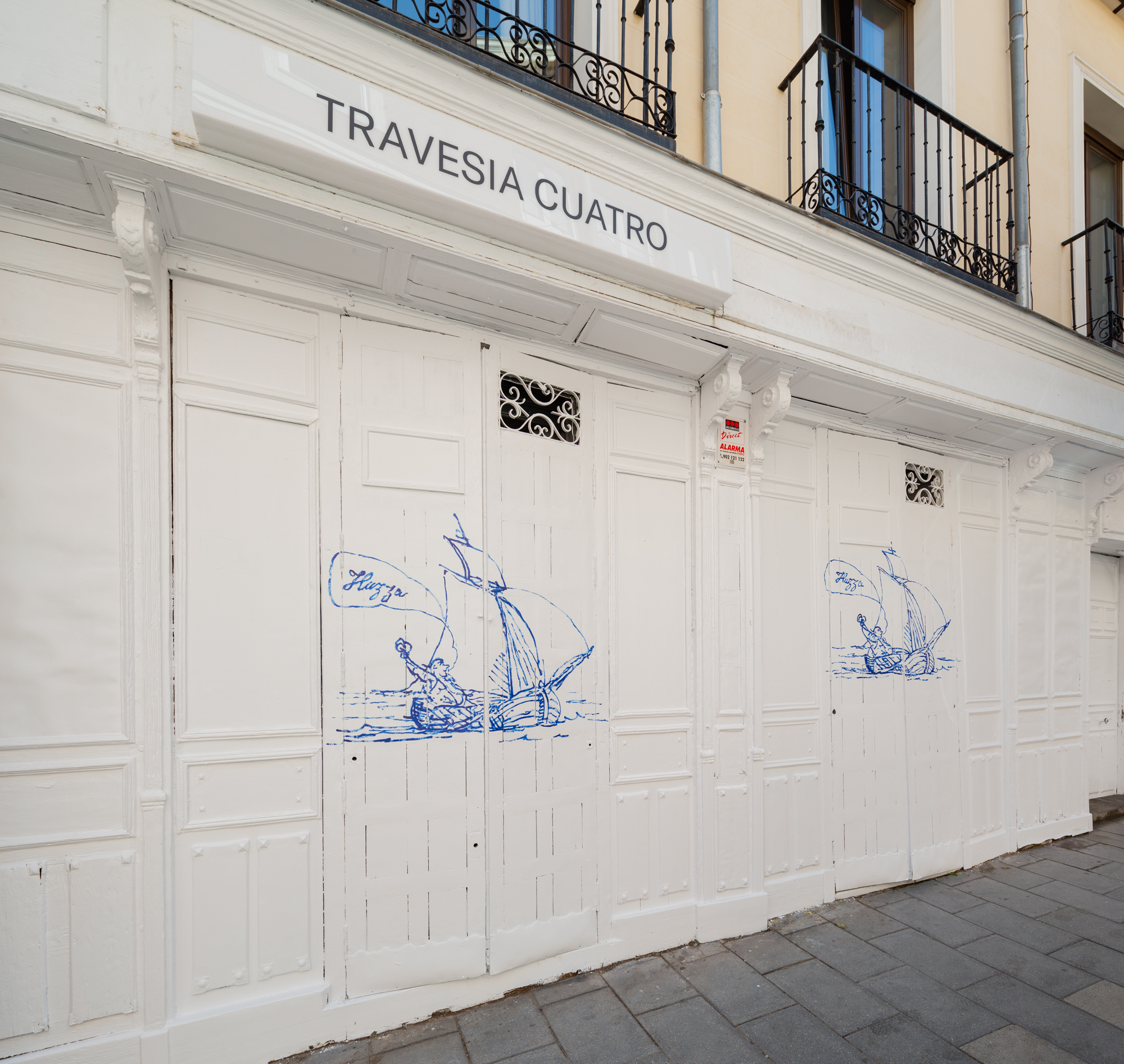 What draws a young painter almost exclusively to British satirical prints from the late eighteenth and early nineteenth centuries? Charlie Billingham is fascinated by the Georgian and Regency caricatures and grotesques of artists such as George Cruikshank (1792–1878), James Gillray (1756/7–1815), William Hogarth (1697-1764) and Thomas Rowlandson (1756–1827), but takes their caustic indictments of the folly, corruption and decadence of this era and crops them, fragments their narratives, transposes them from print to paint, and in the process, transforms these mocking stereotypes for our own age.

As Dickens’ celebrated beginning to his historical novel set in London and Paris around the time of the French Revolution suggests, and as these prints captured, this extraordinary period was one of great social and political upheaval, with the status quo coming under new scrutiny and ridicule, in a manner which, just as Dickens observed from the vantage point of the Victorian era, still has striking parallels to our own age (it is also interesting to note here that Cruikshank illustrated several of Dickens’ novels, after being bribed not to caricature George IV ‘in any immoral situation’).

Innovations in printing techniques enabled these images to flourish, circulate and proliferate, but what Billingham does is take mass-produced prints and turn them into unique images, manifestly painted by hand rather than manufactured by the printing press, the gestural paintwork replacing the line of the original etching, and a highly-keyed and saturated colour palette of oil paint standing in for the shades and striations of historical prints. In this way, Billingham turning mass images into something highly personal and profoundly human, reminds me of the efforts in the early 1960s of American Pop artists such as Roy Lichtenstein and Andy Warhol, who in their own ways, turned the Ben-Day dots of the printing process of mass reproduced images into something idiosyncratic and unique.1

This particular body of new work centres on the English expression ‘to be at sea’, meaning either literally sailing, or to be bemused, puzzled or perplexed, with Billingham playing on the double meaning of this phrase, and in turn, choosing images where doubling, duplication and multiplication abound, to create a sense of disorientation.  This is compounded by the cropping deployed by Billingham, so that alongside the blur of the image (which often depicts arrested motion, such as the female figure tumbling over a banister in one work), we only see a partial section of exaggerated paunch, or cannon pointing to the horizon of sea and sky beyond. As Linda Nochlin writes on the proto modern work of Henry Fuseli (a European contemporary of the artists that so fascinate Billingham), in her study The Body in Pieces: The Fragment as a Metaphor of Modernity: ‘Modernity […] is figured as irrevocable loss, poignant regret for lost totality, a vanished wholeness. […] Out of this loss is constructed the Modern itself. In a certain sense, Fuseli has constructed a distinctively modern view of antiquity-as-loss – a view, a ‘crop’, that will constitute the essence of representational modernism’.2 In this way too, the naval and maritime imagery chosen by Billingham for these works now evoke not just the period of the Napoleonic Wars, but also the confusion we all feel navigating an age in which the compass of truth and trust has broken.