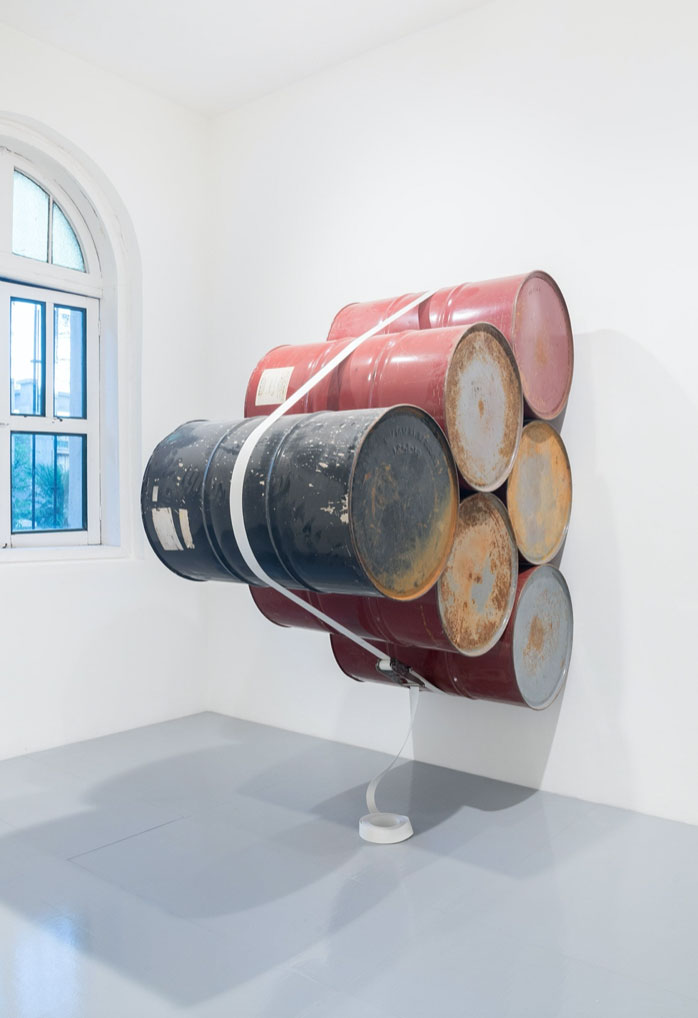 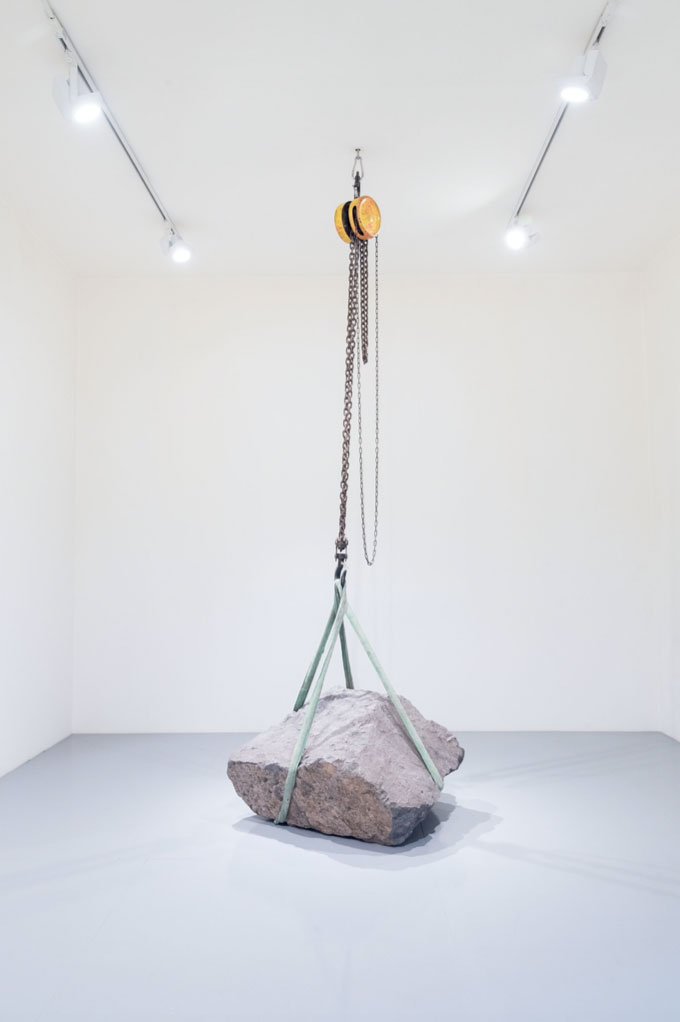 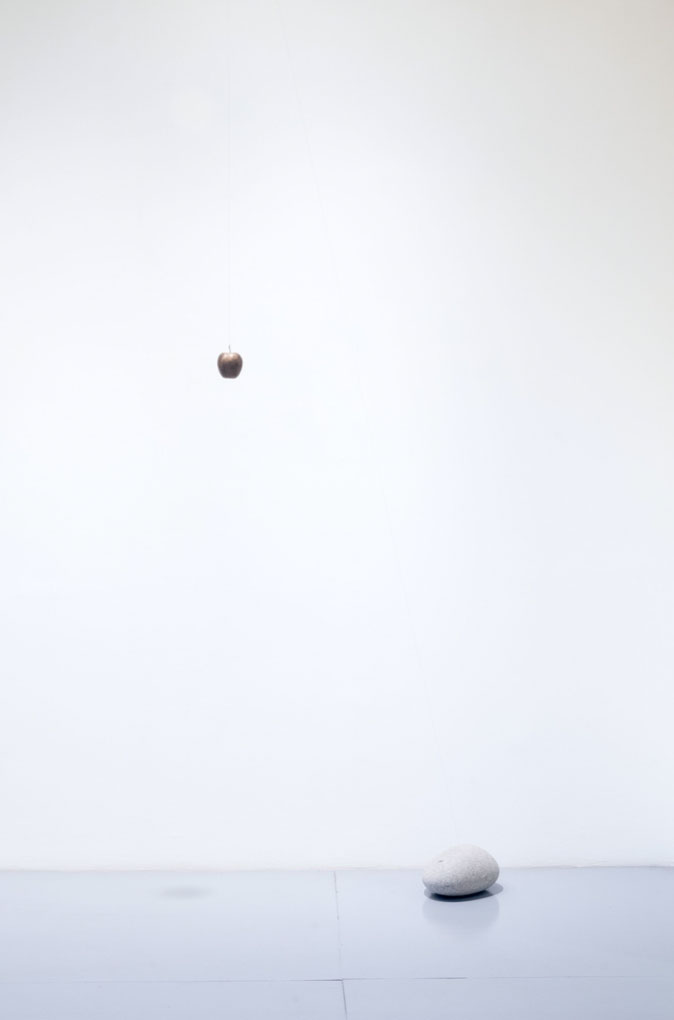 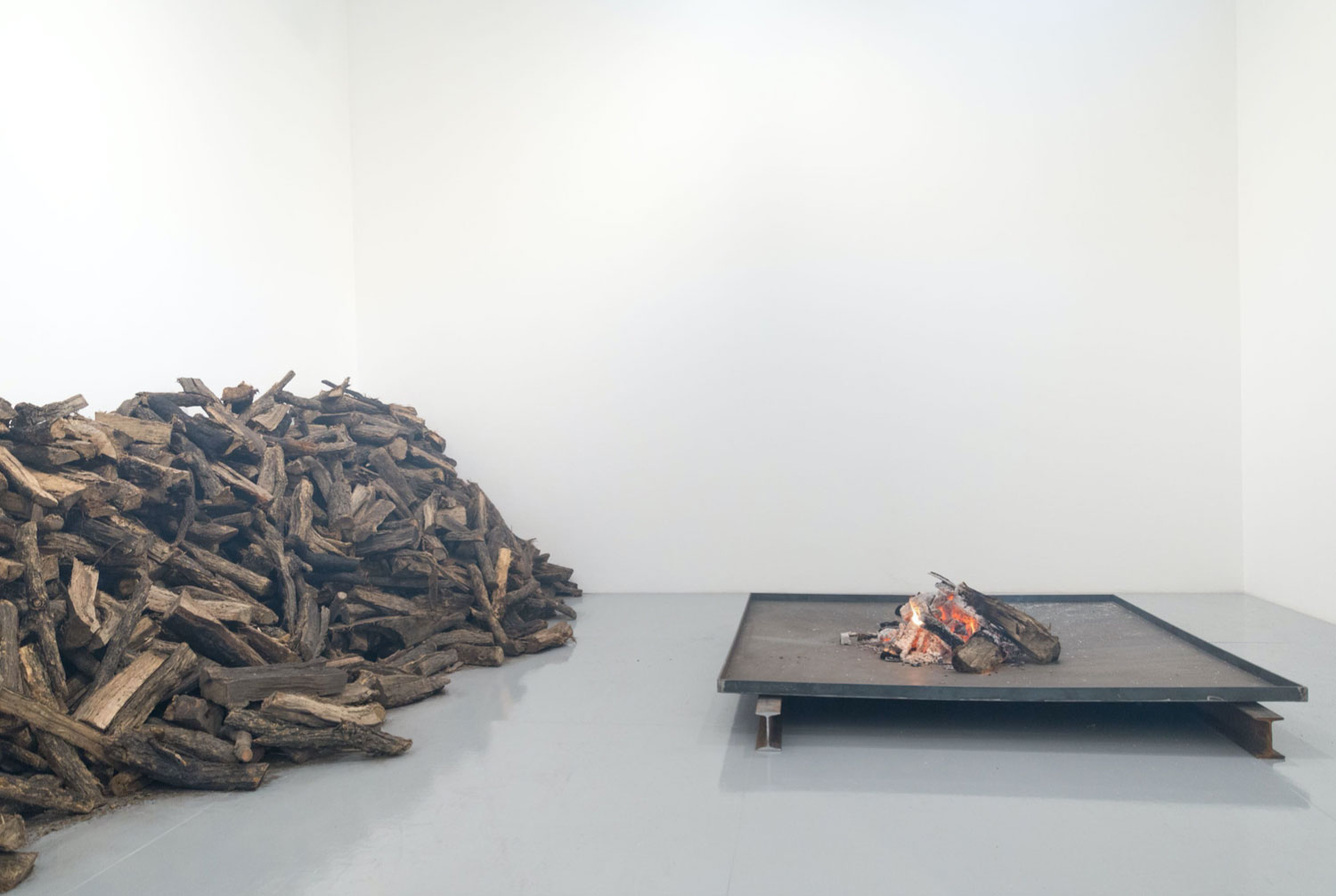 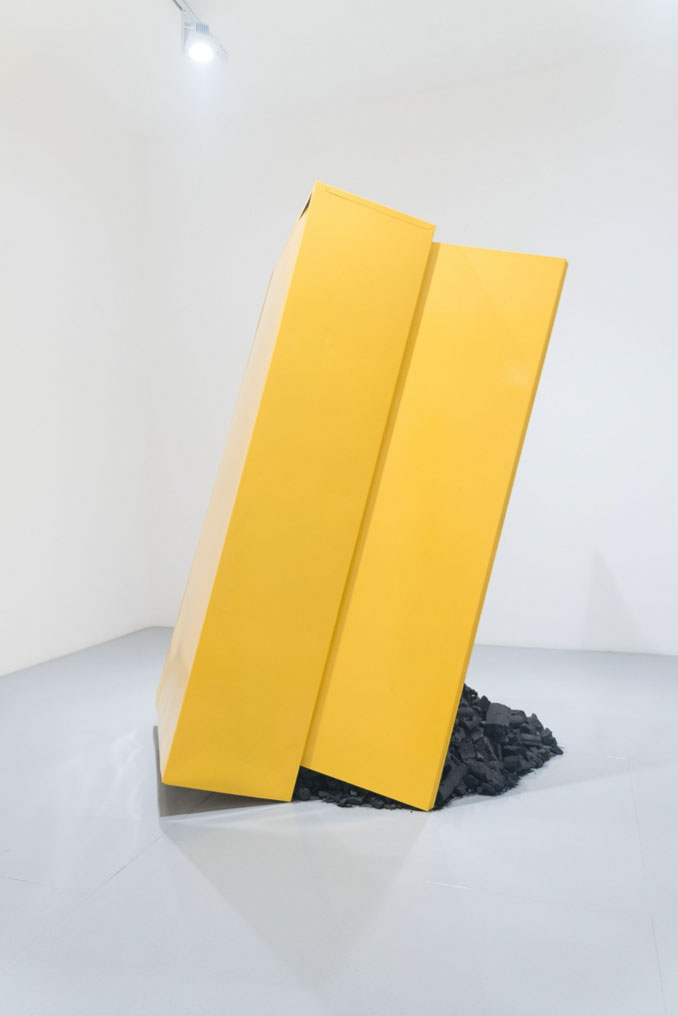 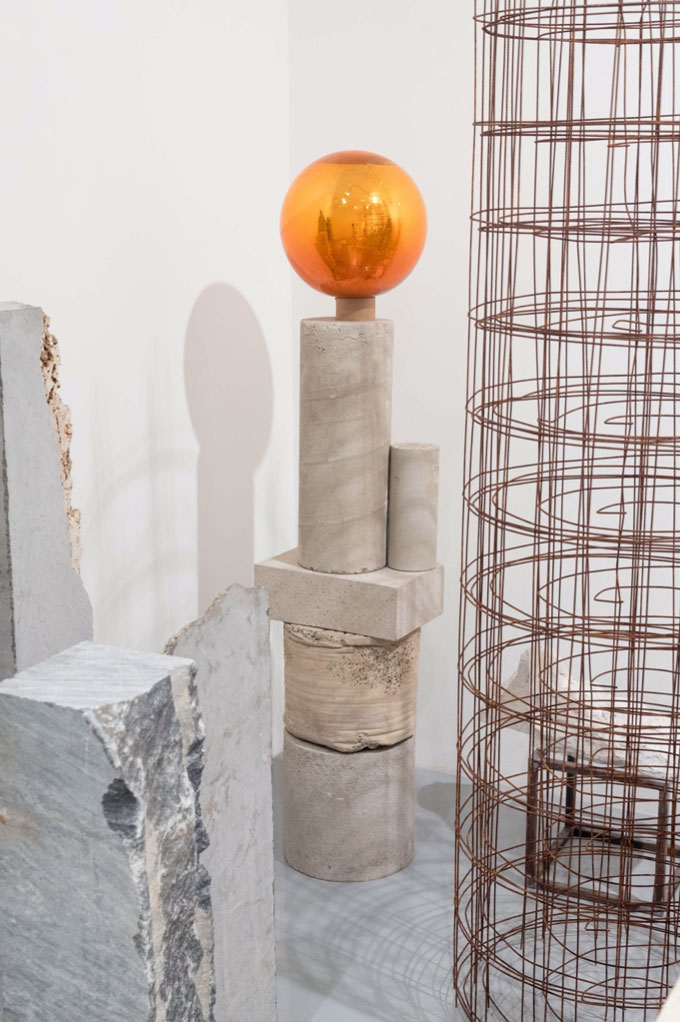 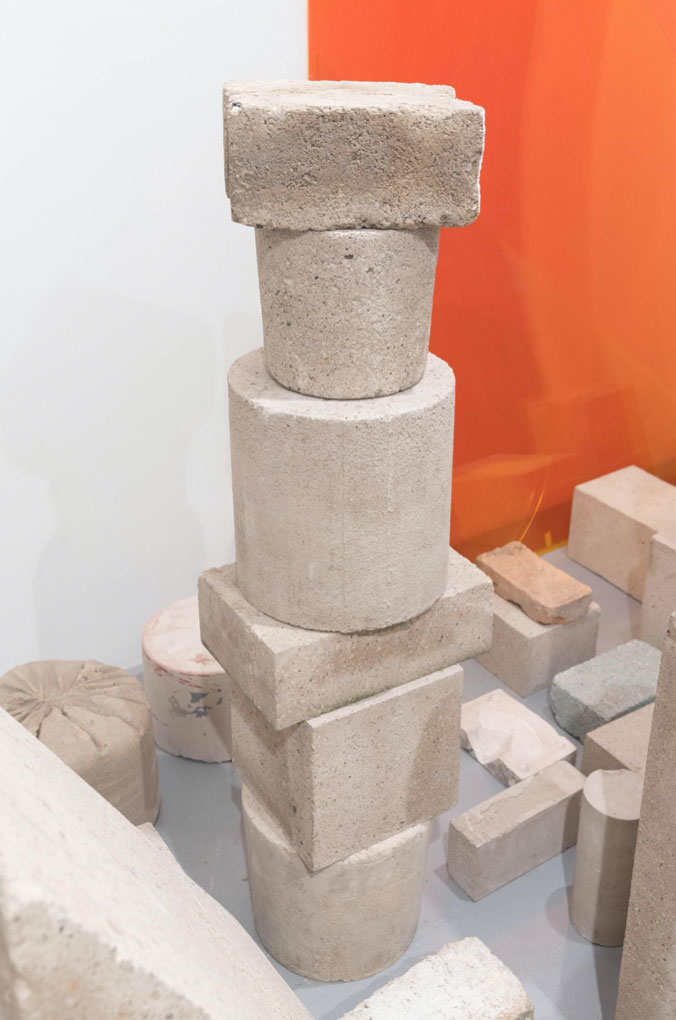 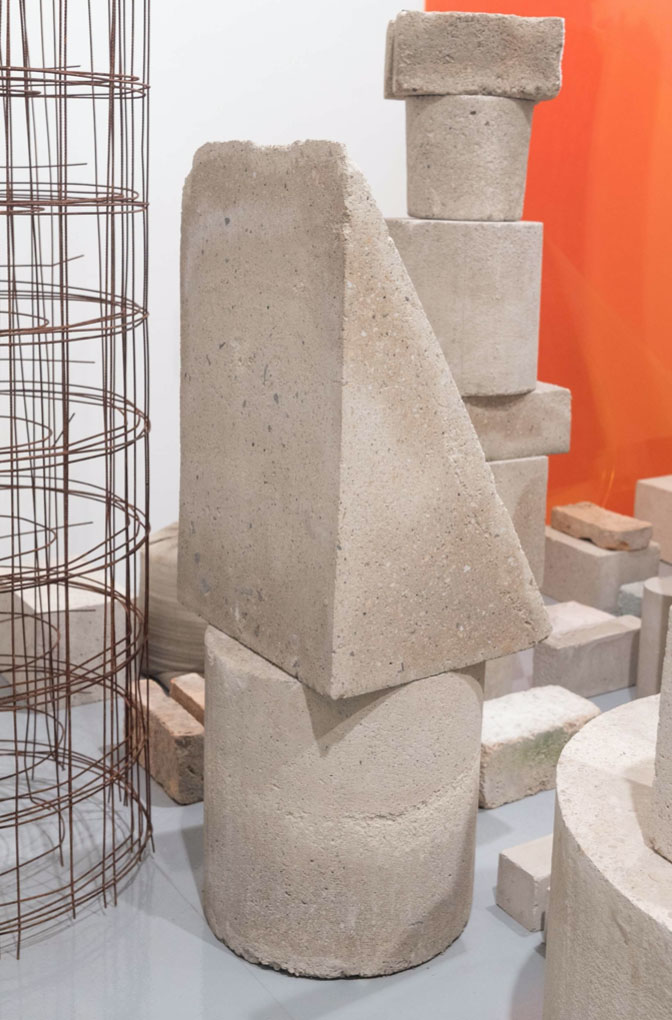 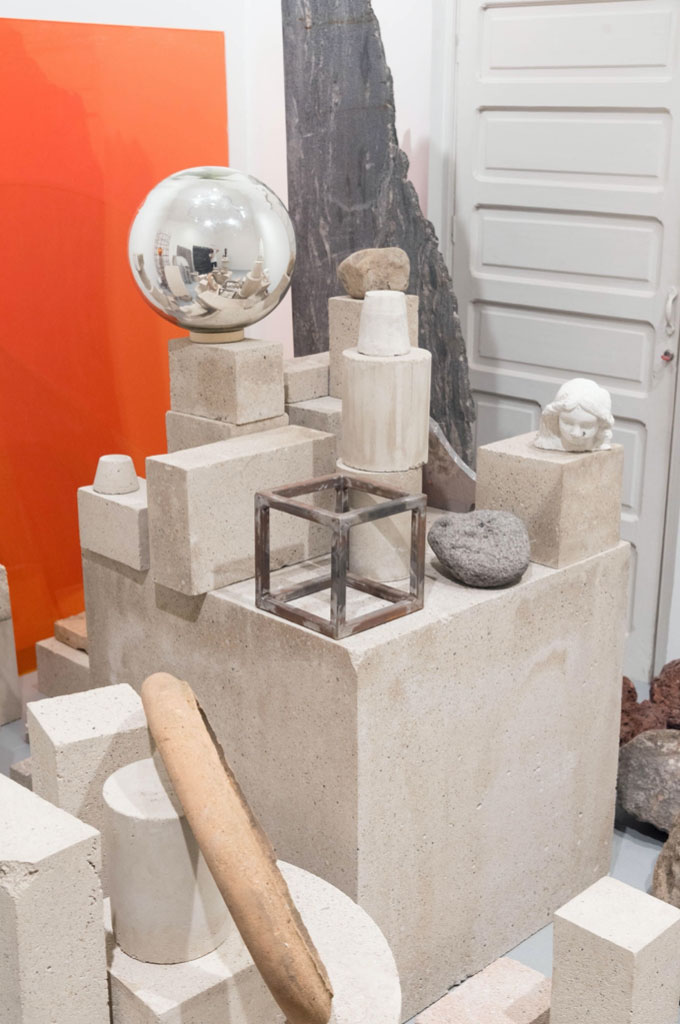 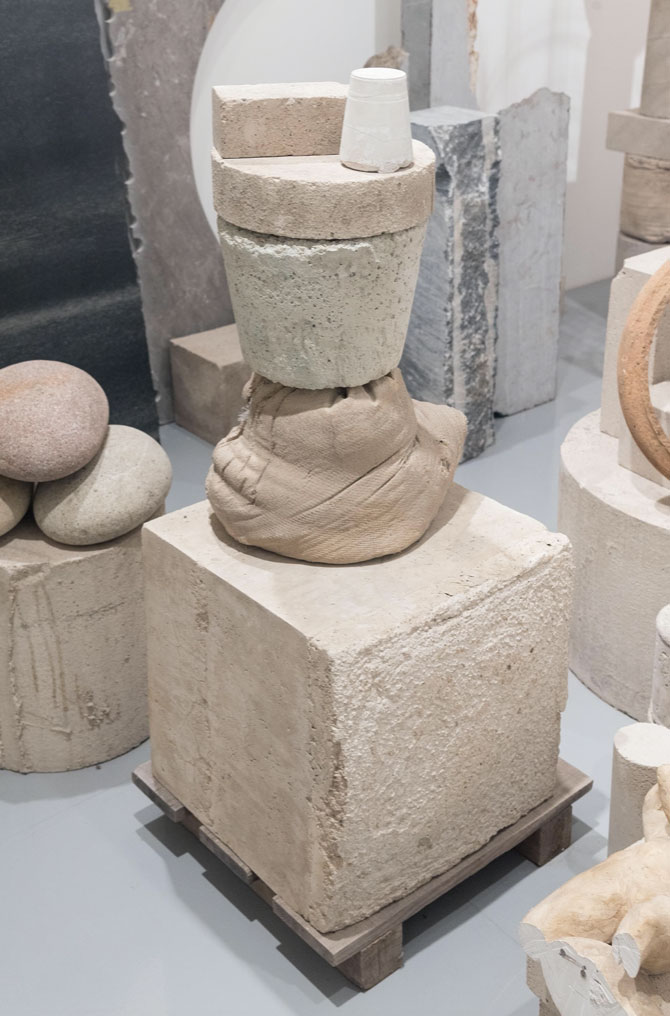 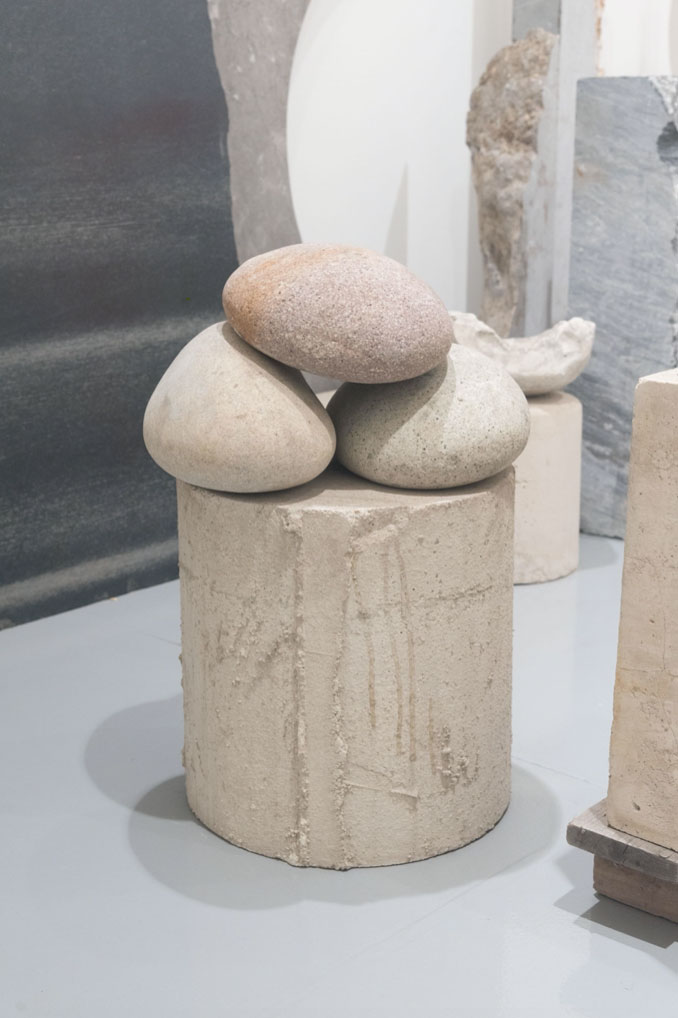 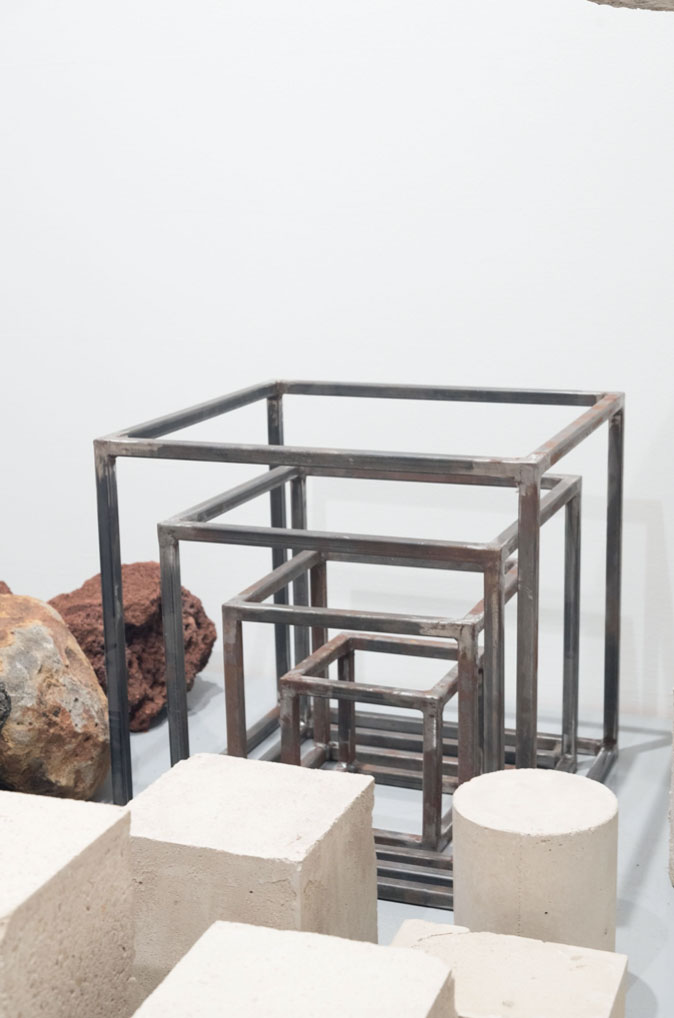 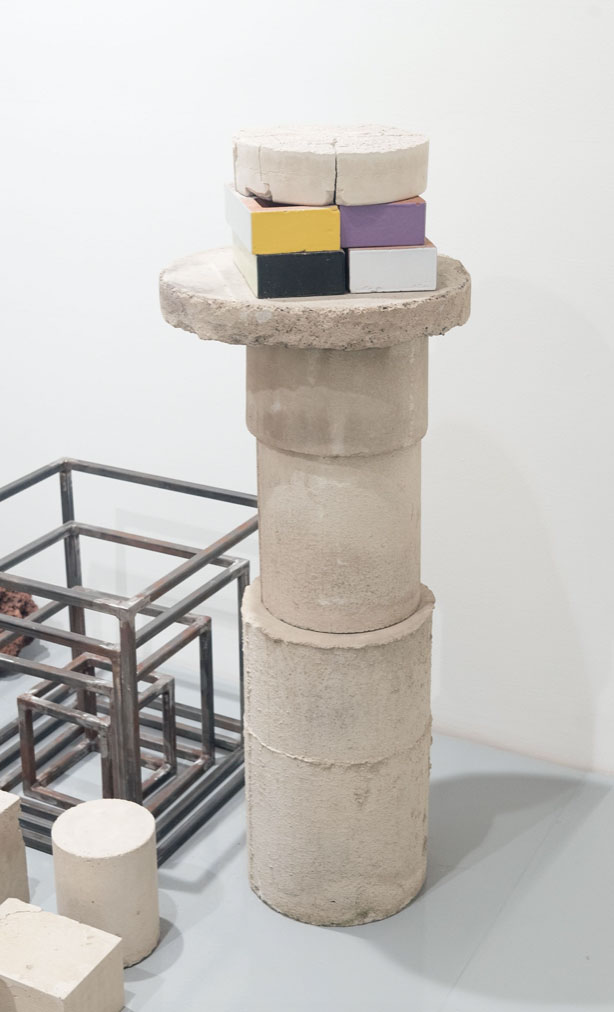 El primer fuego is an exhibition that replicates the material and relational ecosystem that has emerged at Jose Dávila’s studio throughout several years of constant and continuous production. Taking advantage of the geographical proximity between the studio and the exhibition space, the gallery has been transformed into a work space and functions as a reflection of the procedures that precede the consolidation of Dávila’s sculptural work.

The exhibition presents different moments that take place between the selection of raw materials and the conclusion of sculptural objects. This highlights the importance of the interrelation between objects which is channelized by the artist in order to generate structural systems of dependence. This sort of objectual reliance is characterized by the borrowing and exchange of qualities between contrasting materials in order to assure a certain degree of balance and permanence. The creation of these hybrid circuits implies a cyclical understanding of the transformation of matter. A fluctuating motion between self-preservation and disintegration.

The central piece within the exhibition represents a return to an early work by Dávila which was exhibited in 1999 at the Museo de las Artes de Guadalajara. The recreation of this work involves a small bonfire which is lighted intermittently inside the gallery space, the fire is surrounded by piles of logs witnessing the ignition process and awaiting as potential fuel. The metal tray that works as a platform for activating the bonfire operates as a liminal space where matter is forced to undergo a transformation process. Dávila’s minimal gesture presents fire as an autonomous symbol, referencing the notion of origin and the primitive; this sort of raw energy is able to reconfigure the reality of things and unveil the internal dynamics that are concealed within objects.

As a prelude, the bonfire is preceded by a couple of sculptures that work as mirrored counterweights. A raw stone is fastened to an industrial pulley which is fixed to the ceiling; this heavy object is faced by an apple made of bronze which remains suspended in the air. These two elements are part of Dávila’s recurring sculptural vocabulary; the apple is a recognizable reminder of the effects of the force of gravity. These compositional formats are continued in the next room where a group of metal barrels are affixed to the wall, making a pyramidal shape. The sequence of works generates a tangible rhythm that suggest the prevalence of a certain order. The ratchet straps, cables and chains that Dávila uses to connect objects function as forms of mediation and construct a structural itinerary. The trajectories between objects reconfigure the spatial experience of the gallery, dialoguing with its architectural disposition, modifying and dislocating the displacement dynamics that take place there.

The intuition of a certain order is interrupted abruptly by a chaotic accumulation of raw materials in the adjacent rooms. Concrete volumes, rocks, marble slabs, acrylic plates, fragments of wood and other construction materials occupy the entire room. This installation is a glance at the objects that inhabit the studio; and it is also a draft of Dávila’s work ethic that is characterized by the intuition of a series of possible interactions between objects. Since most of these objects are normally used as construction elements, these implies the suggestion of practical associations. Dávila does not reduces the interaction between objects to these practical terms, rather he is inclined to intertwine these elements through a poetic resonance that could attribute them with autonomy. The coexistence of these lithic bodies and industrial objects in the studio is what enables the appearance of these possible connections that are characterized to be more organic rather than an imposition from a predetermined conception of the sculptural. The circulation of these material presences in the exhibition culminates with a work that shows a tilted metallic cabinet being balanced out by a mound of coal. The relation between both objects arises as something mainly chromatic, adding a pictorial dimension to the sculptural object, but it also highlights the cyclic configuration of the whole exhibition: a circle that unfolds into itself towards infinity, intermittently raging from the human, constructed world to the unaltered configuration of raw matter.