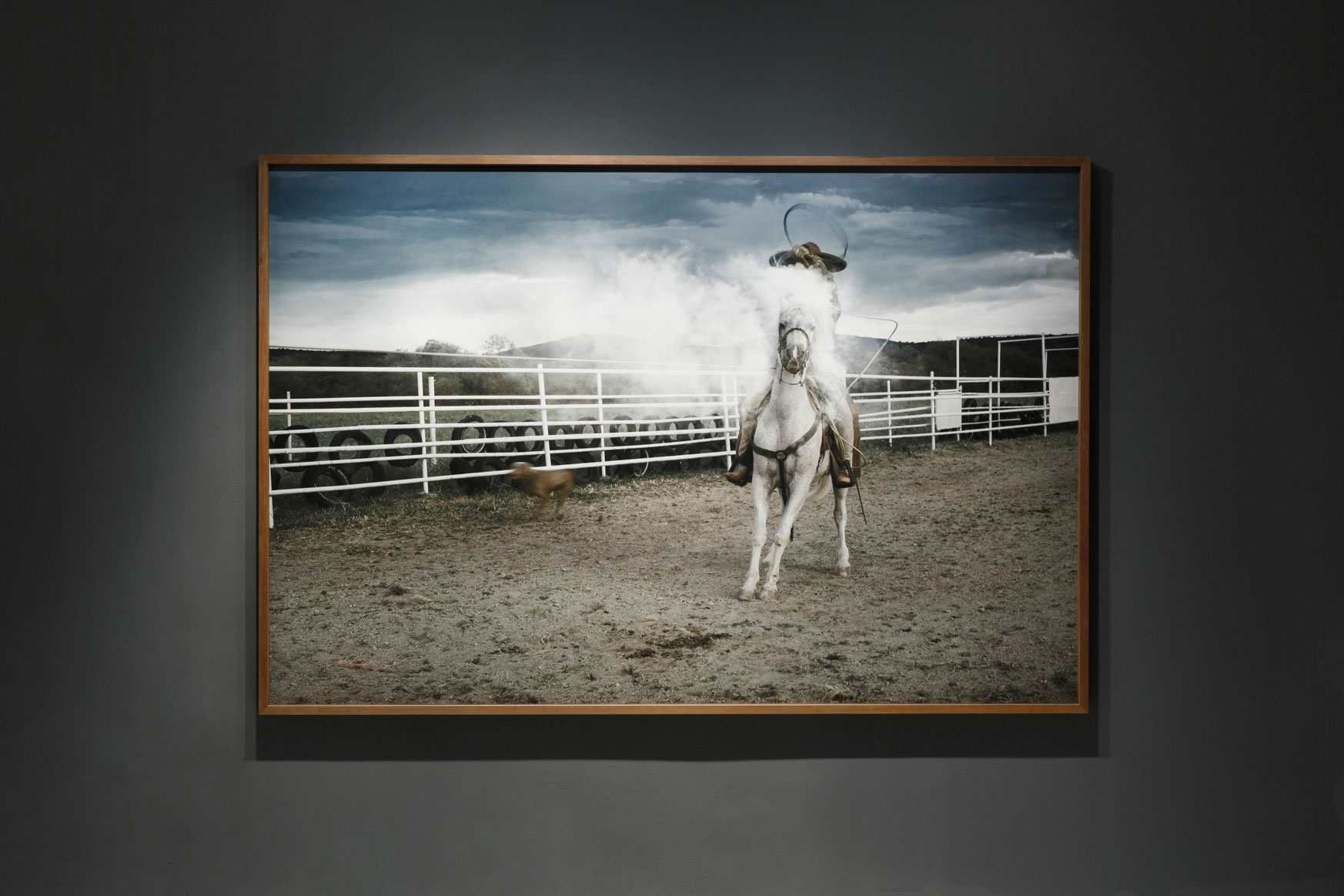 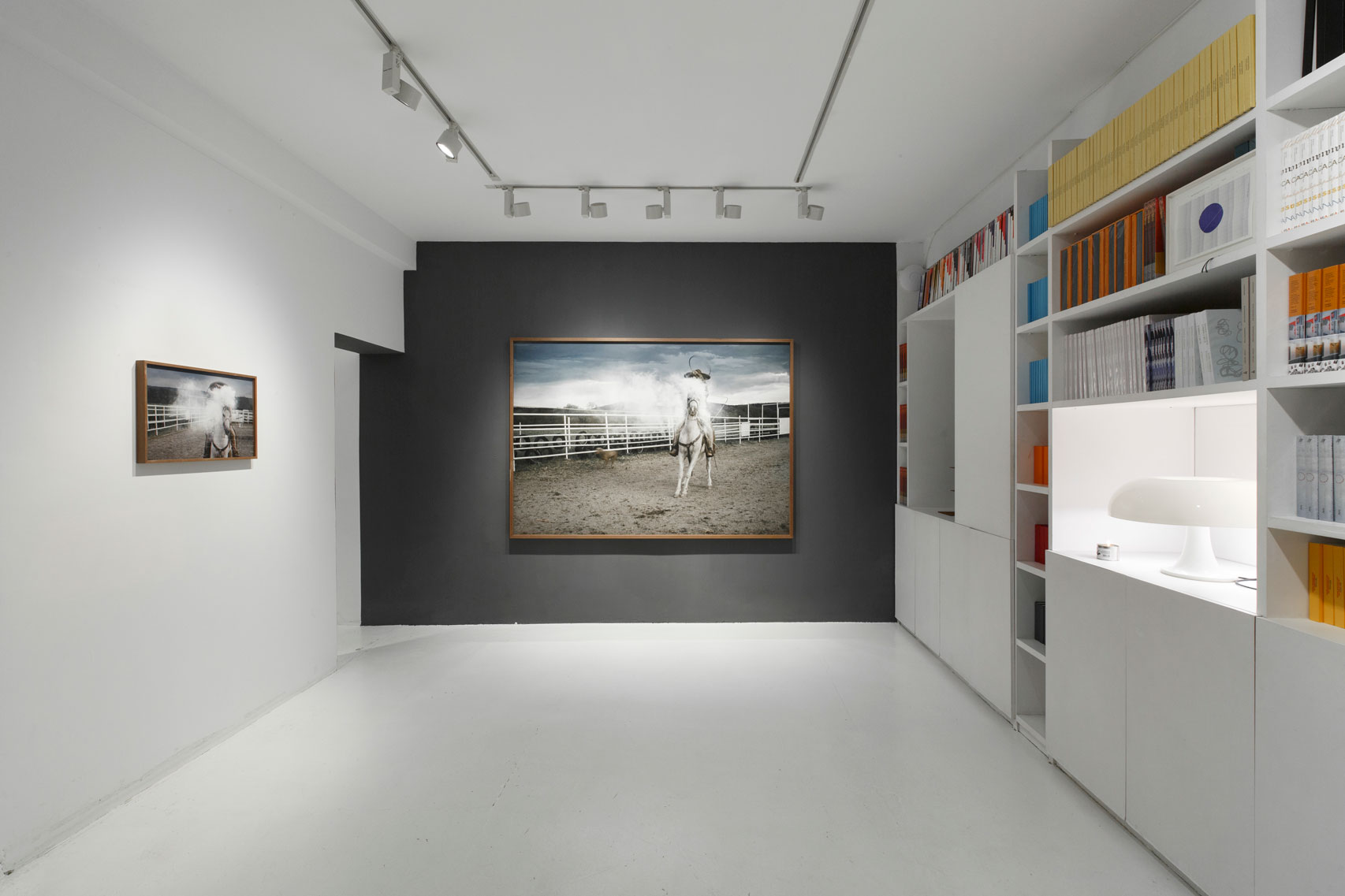 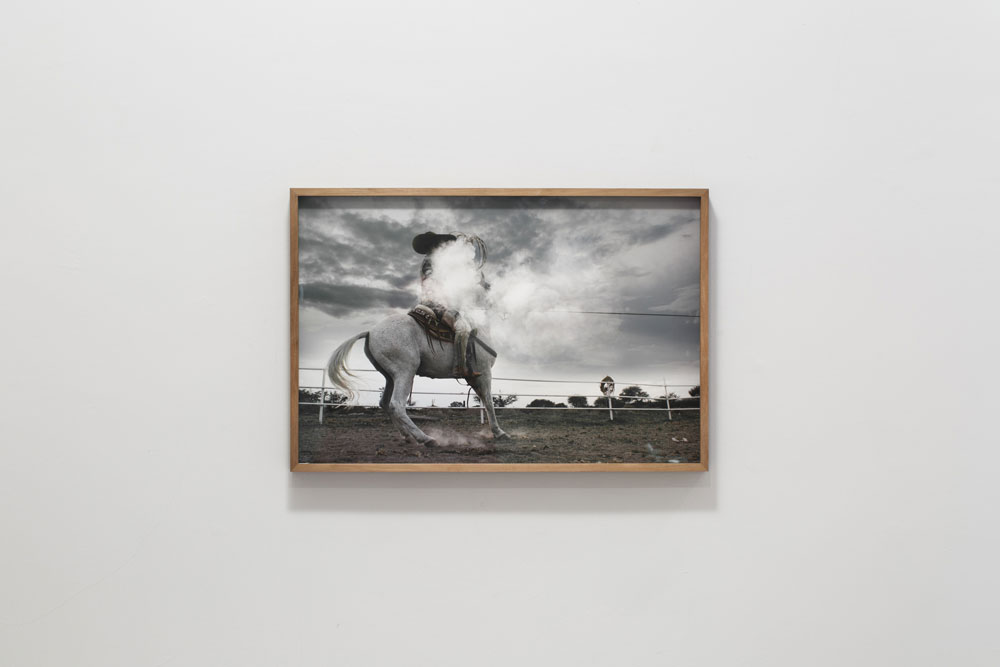 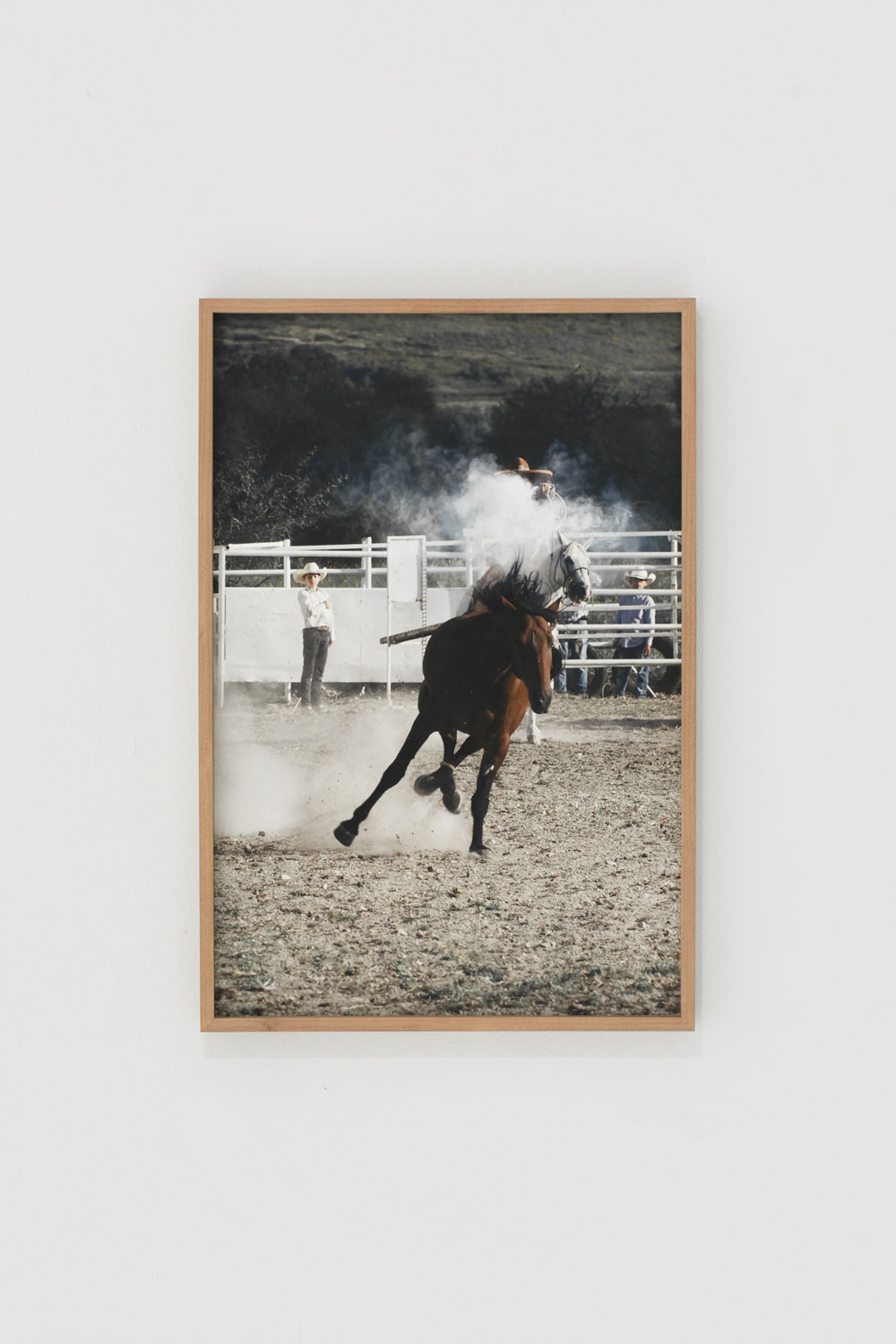 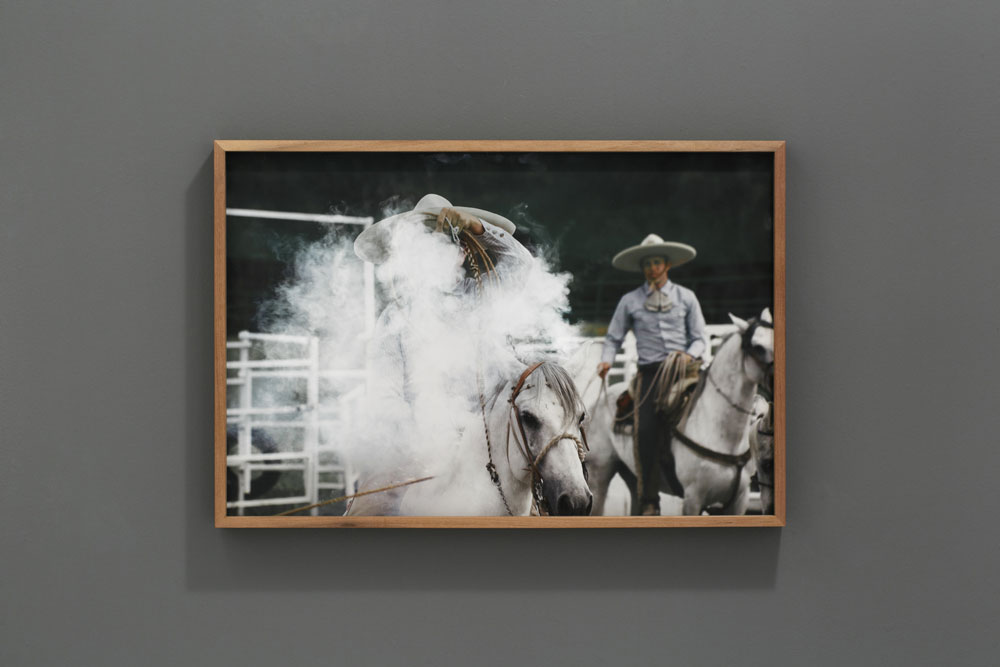 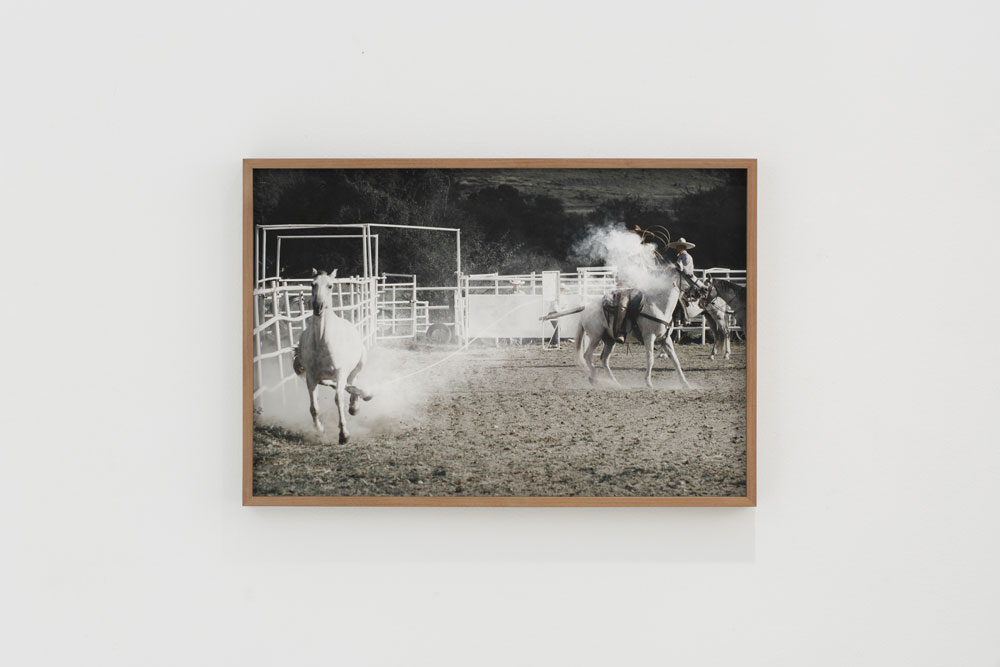 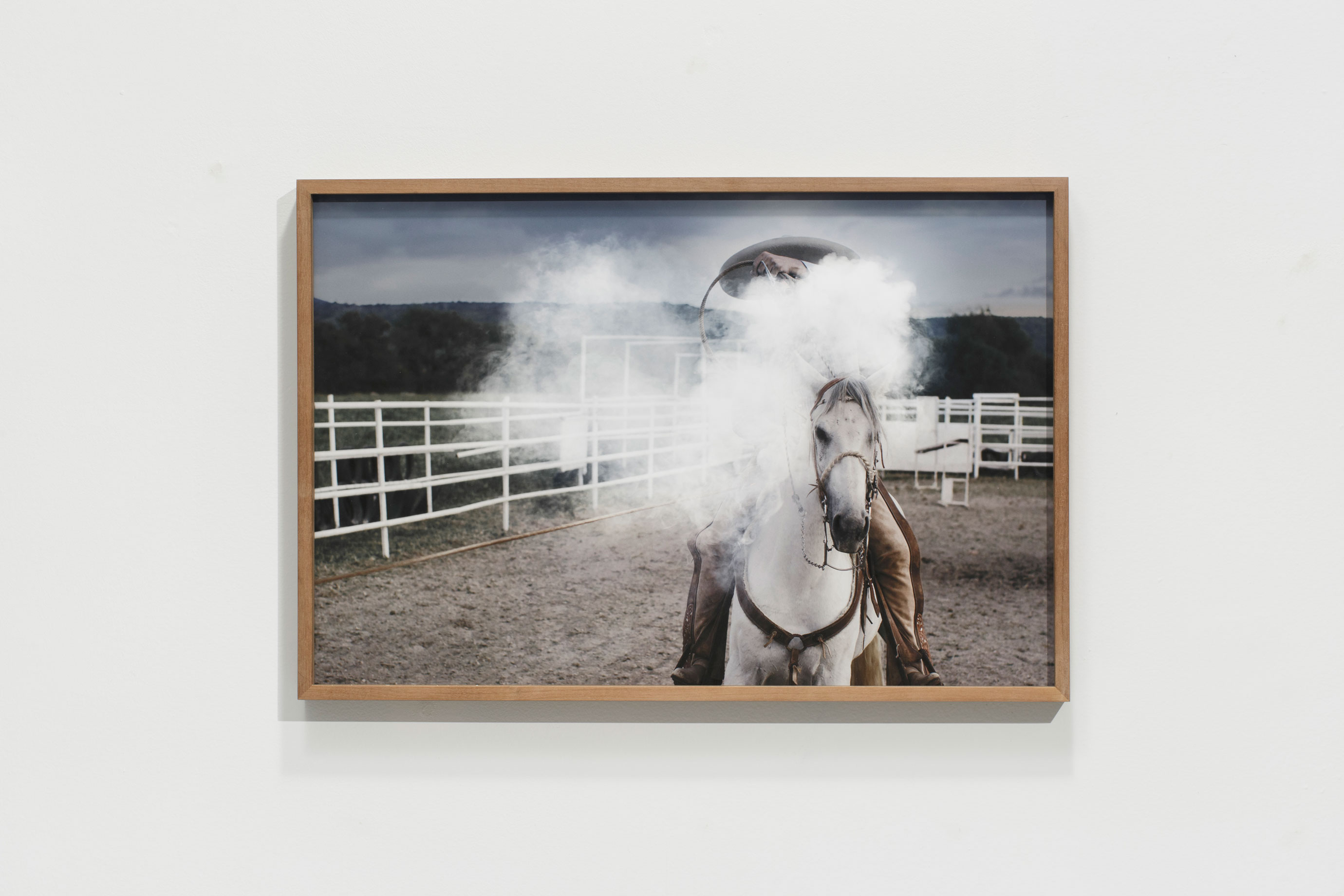 The more intense life is, the more essential and revealing is time. E.M. Cioran

Travesía Cuatro presents Gonzalo Lebrija’s fourth solo exhibition at the gallery, entitled Piales (La suerte de detener el tiempo) [Lariat (The Chance of Stopping Time)]. This project is based on the Charrería, a practice that has its origins in farm work and ranching, and that developed into a sport following the agrarian reform of the early 20th century. It is the national sport of Mexico and is listed by UNESCO as an Intangible Cultural Heritage of Humanity.
One of the events of the Charrería is called piales en el lienzo, in which a mare must be heeled by throwing a lariat to catch its hind legs. The event is a beautiful combination of horsemanship and roping skills. As in earlier projects, Lebrija uses the most popular elements of Mexican culture to delve into, disrupt and readjust the meaning of time and perpetuity.

In this project’s double channel video and a series of photographs, Lebrija brings together two elements he has used in earlier works: smoke (The Milky Way, 2017, National Museum of Fine Arts, Havana) and the figure of the charro [cowboy] (Life is worth nothing, 2012, Travesía Cuatro Madrid). These are familiar elements from the artist’s life which he returns to repeatedly, but always affording them new content and poetry.
In this fable, the smartly-dressed charro appears mounted on his horse, projecting the self-confidence characteristic of one who is about to carry out a victorious action. Perched up high on his horse, smelling of earth, the charro deploys his masculinity as he catches the mare’s legs in a single movement. By rubbing the rope against the saddle, an action known as chorrear la reata, smoke is created and with it, all of the senses are activated: compassion, victory, tradition, sensuality, temperance, solidity and balance.

Lebrija’s images smell of burnt time, a time that longs for the end of social conventions and patriarchy. This is quite an ambitious battle for Mexican society. Throughout his career, the artist has created images and actions that turn on the concept of time. He plays with time, and does everything possible to slow it down, give each minute a few more seconds, and fend off the related acceleration of time that is imposed by the power of the masses. He opens up the chance for new rhythms, and introduces us into a kind of transcendental meditation that brings us closer to a spiritual, mystical experience.

Lebrija is always teetering between a constant effort to slow down life and an intense pursuit of perpetuity. The cadence of the images we see in the film allows us to have a deep experience of the moment, which also brings us closer to timelessness. And altogether, this drives us into the unconscious desire to slow down our progress towards the inevitable.

In this combat no one is victorious, only time and its passage.