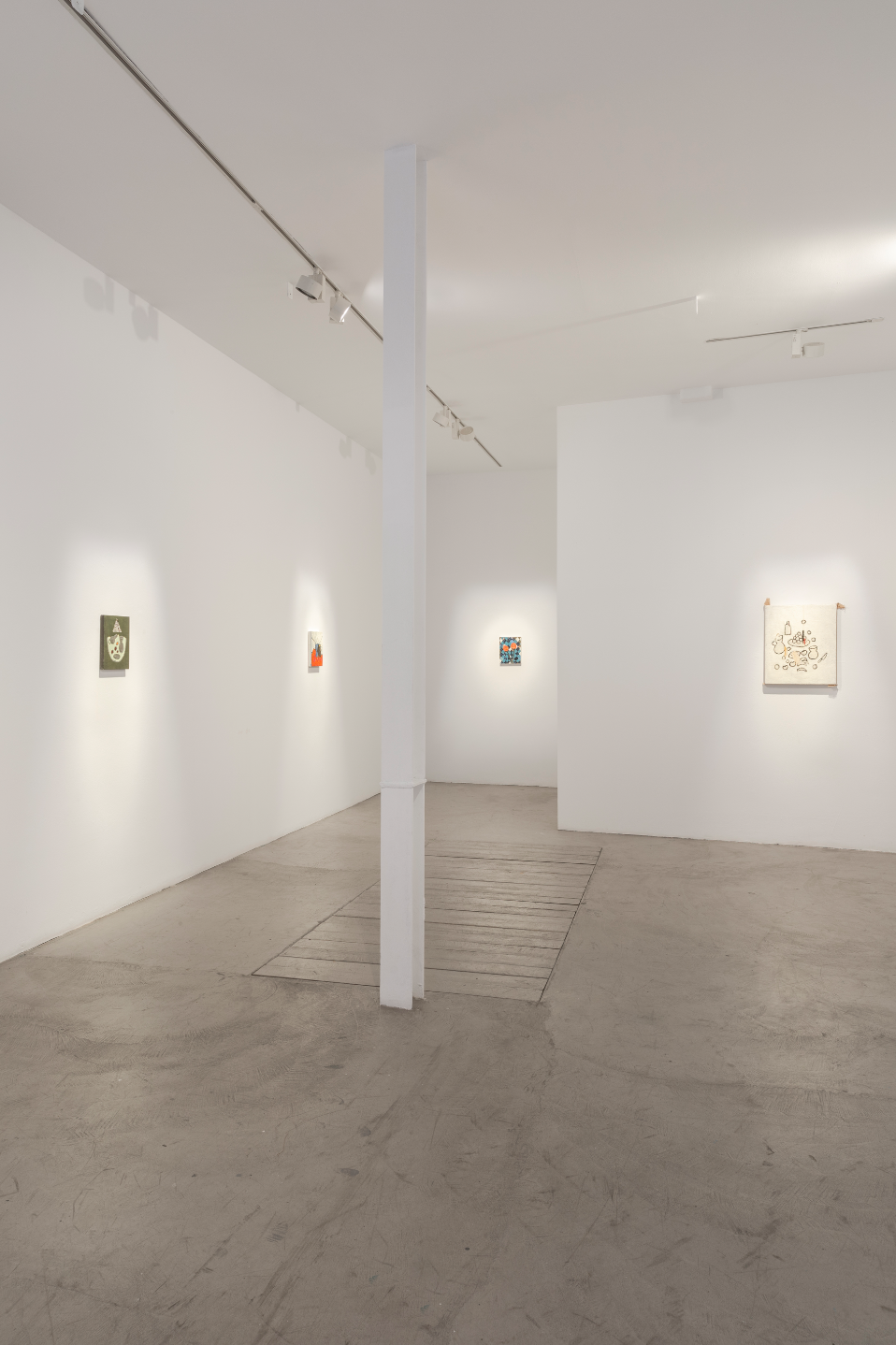 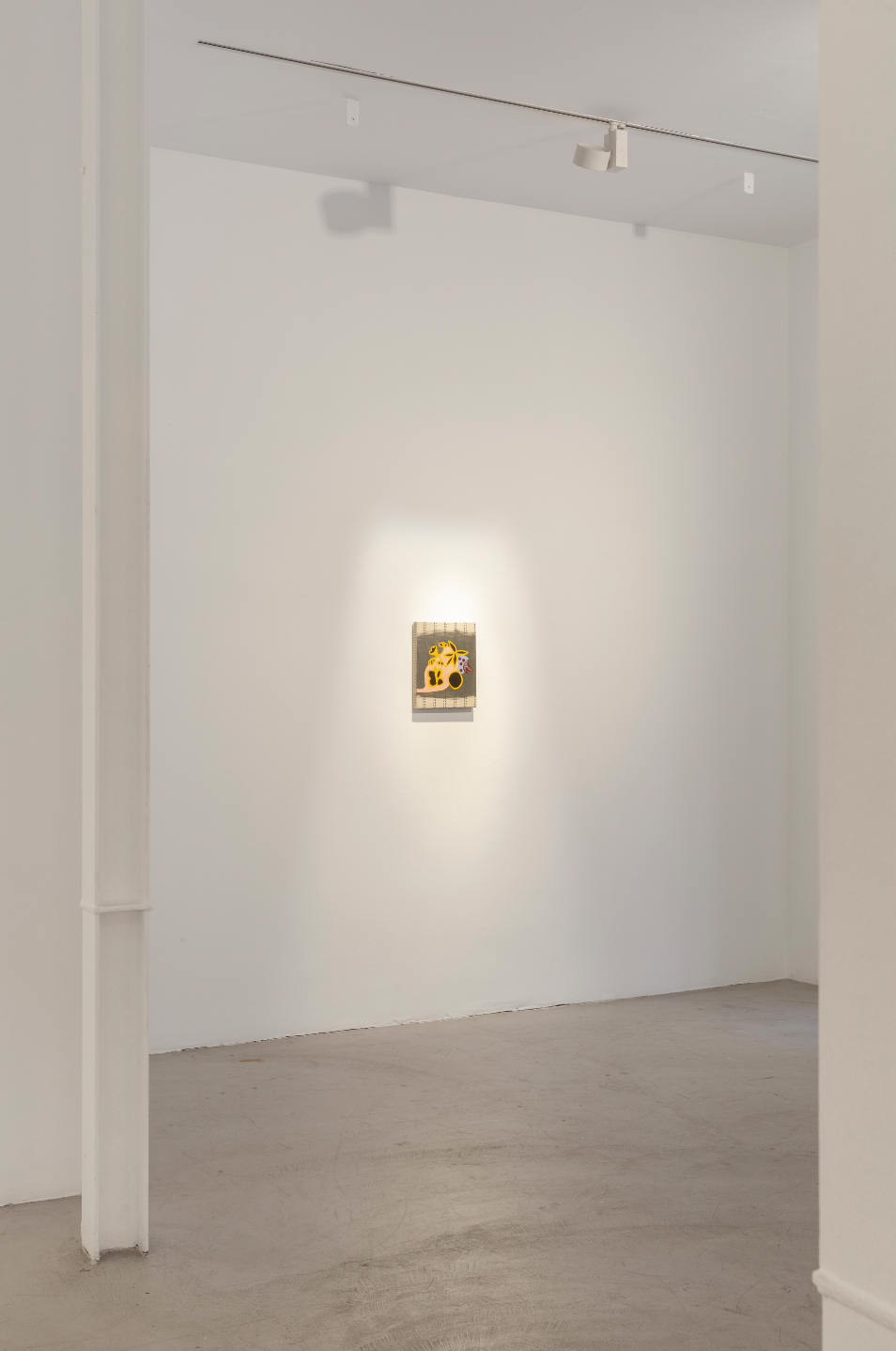 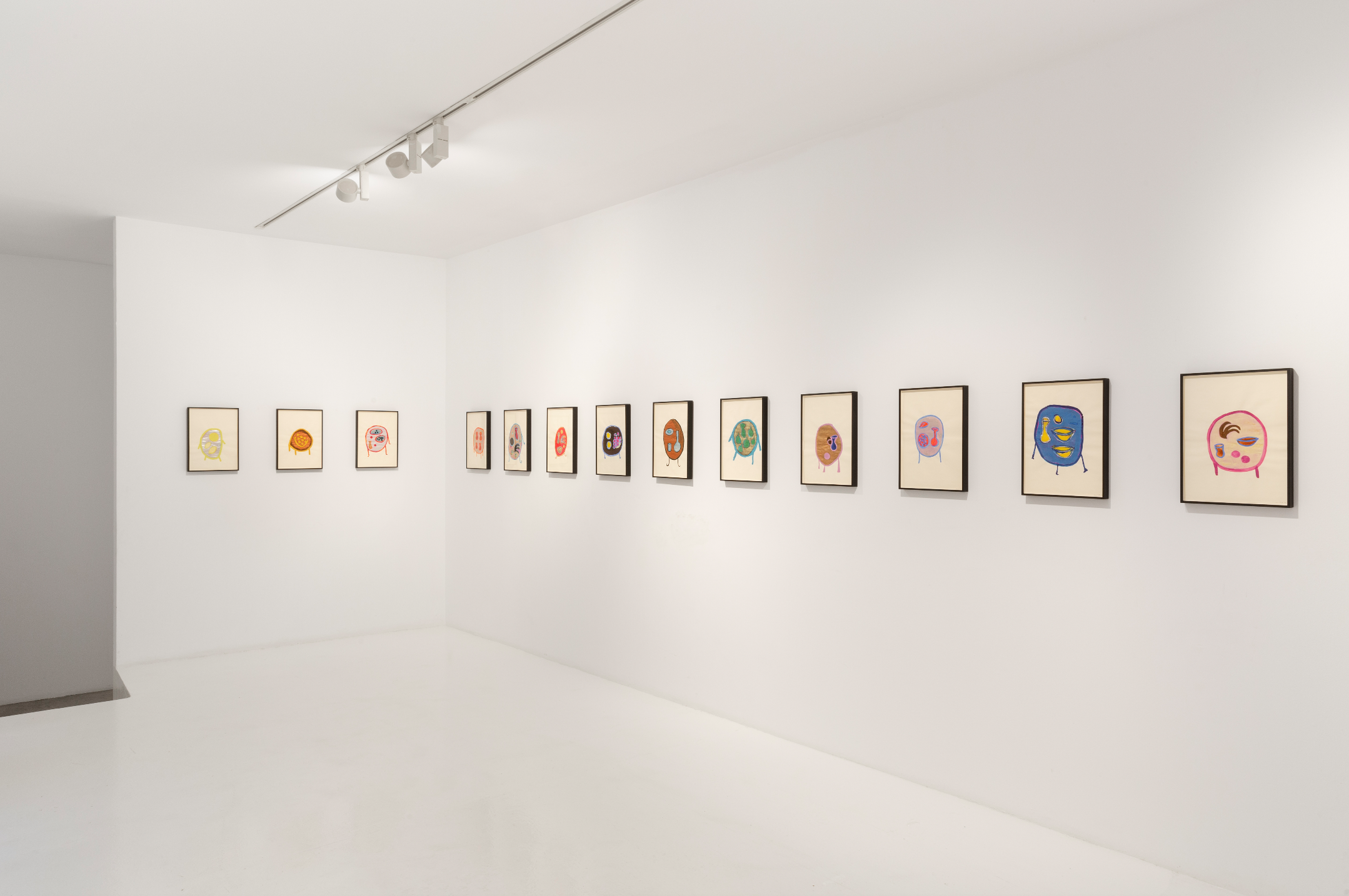 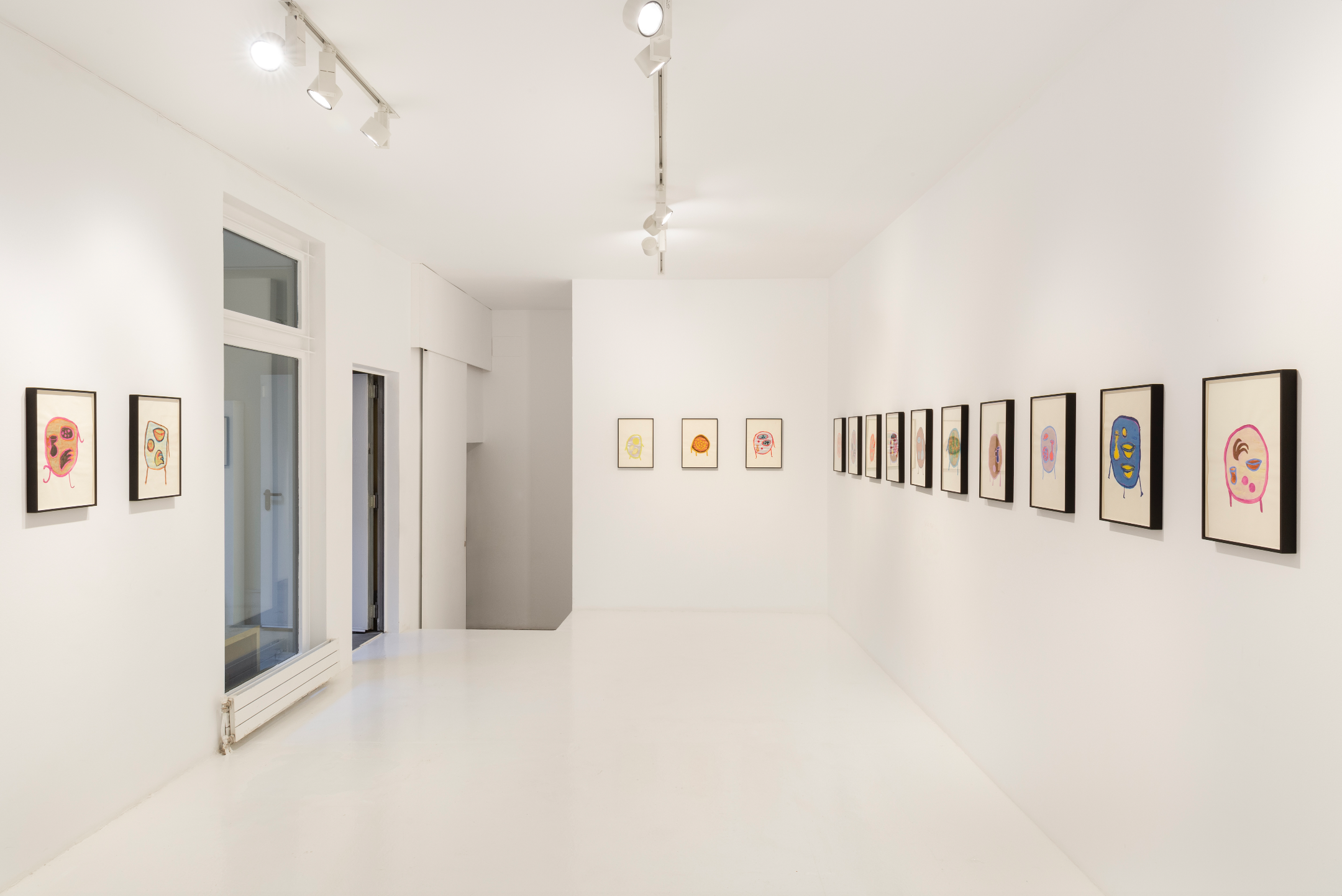 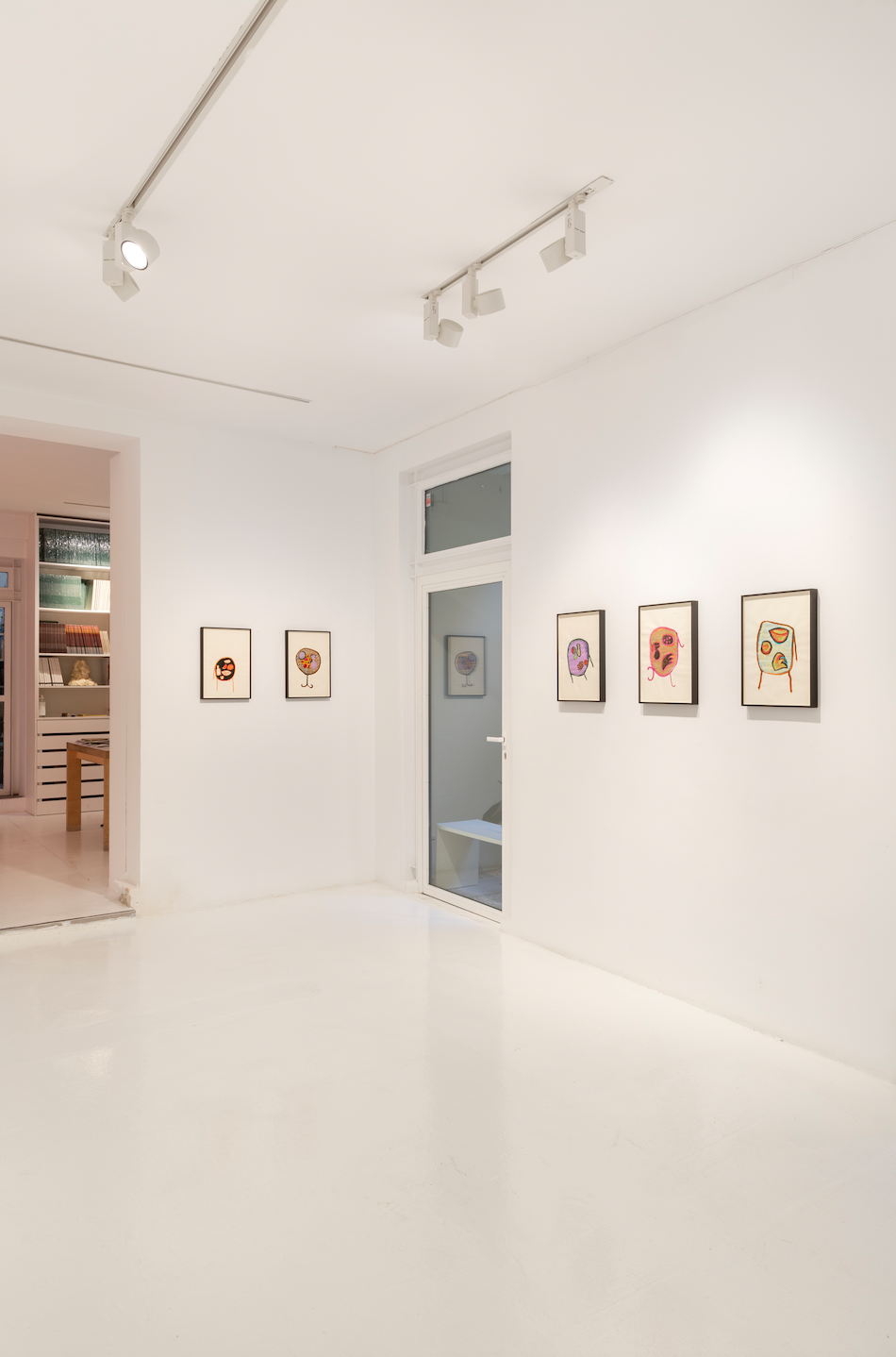 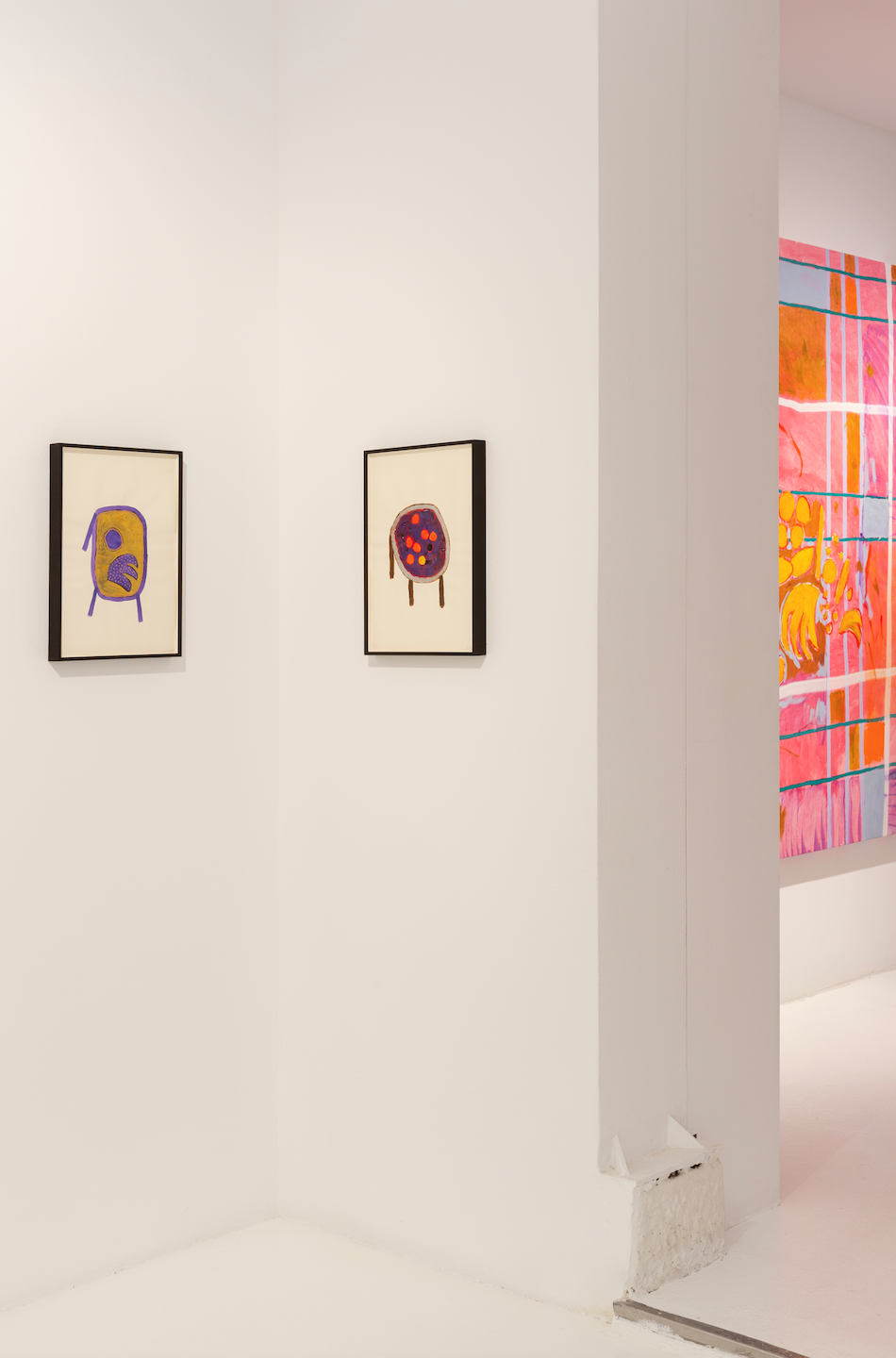 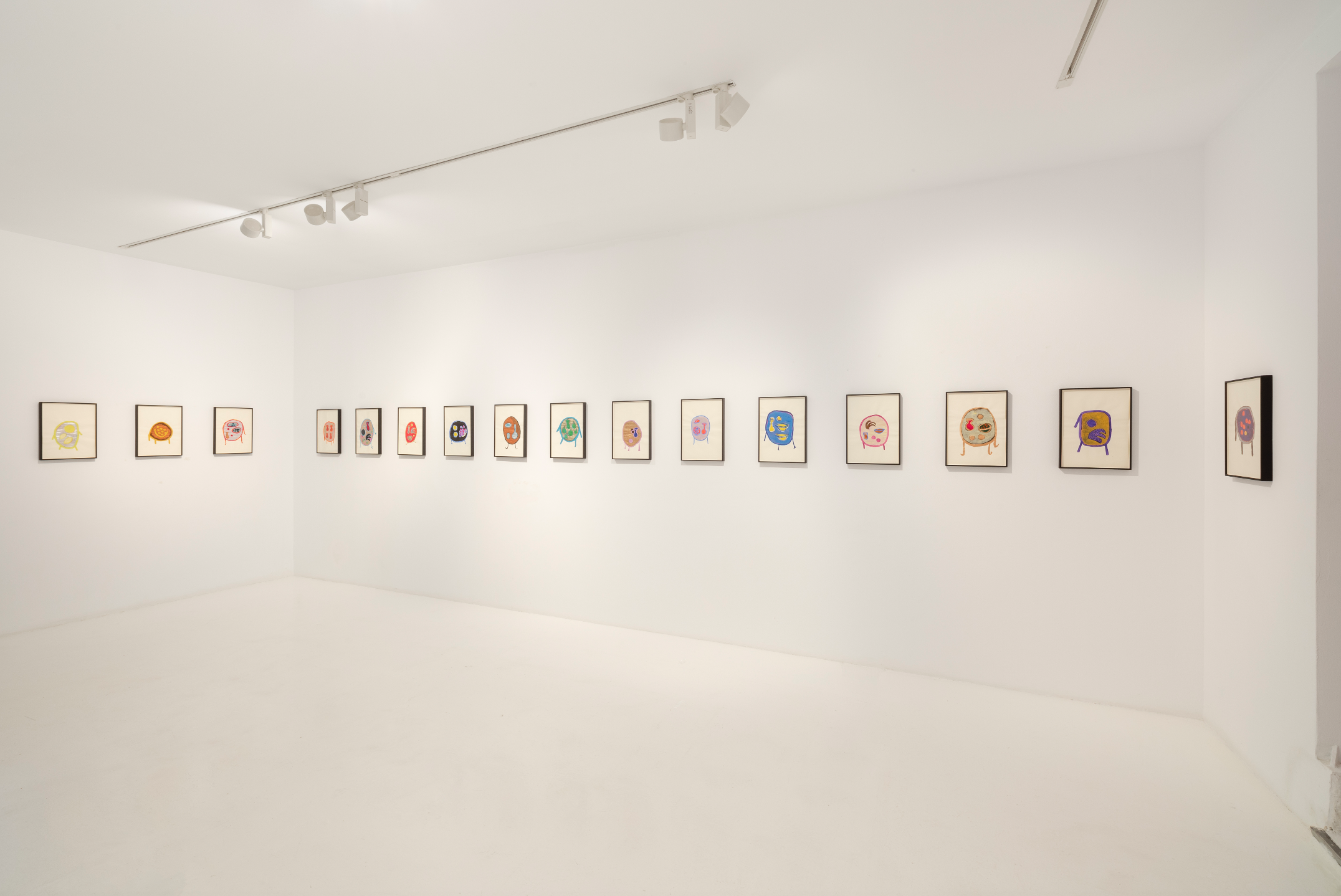 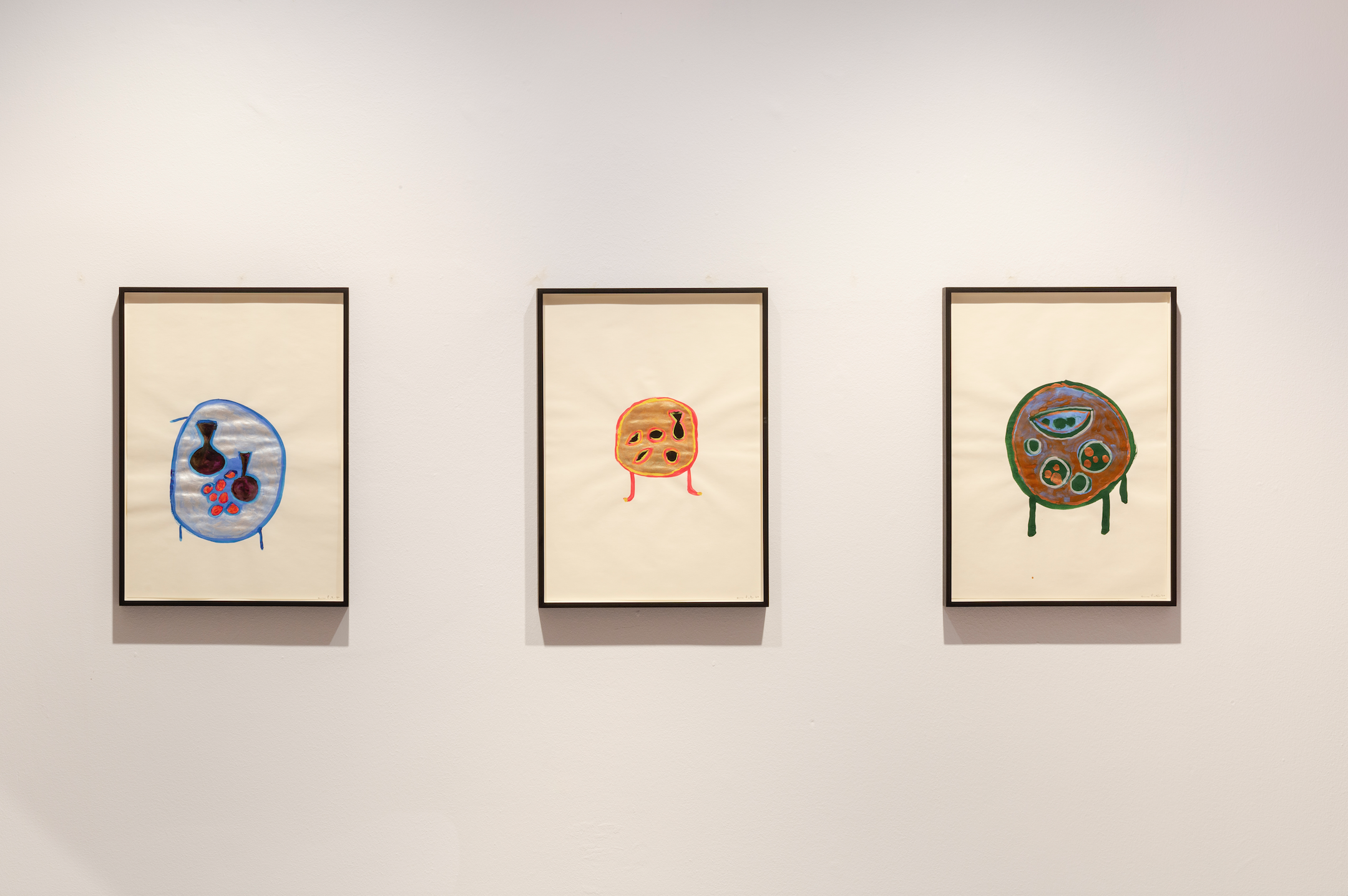 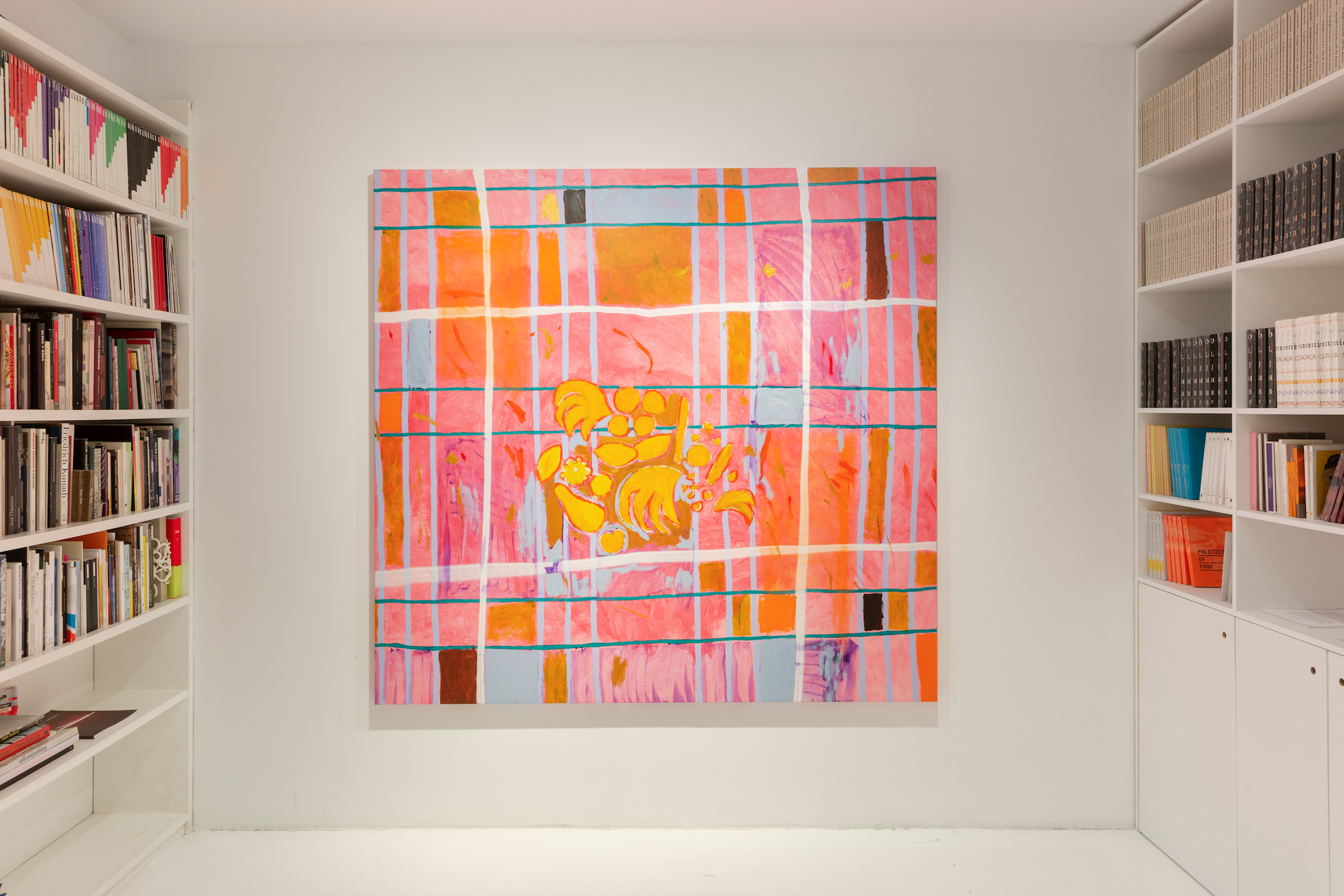 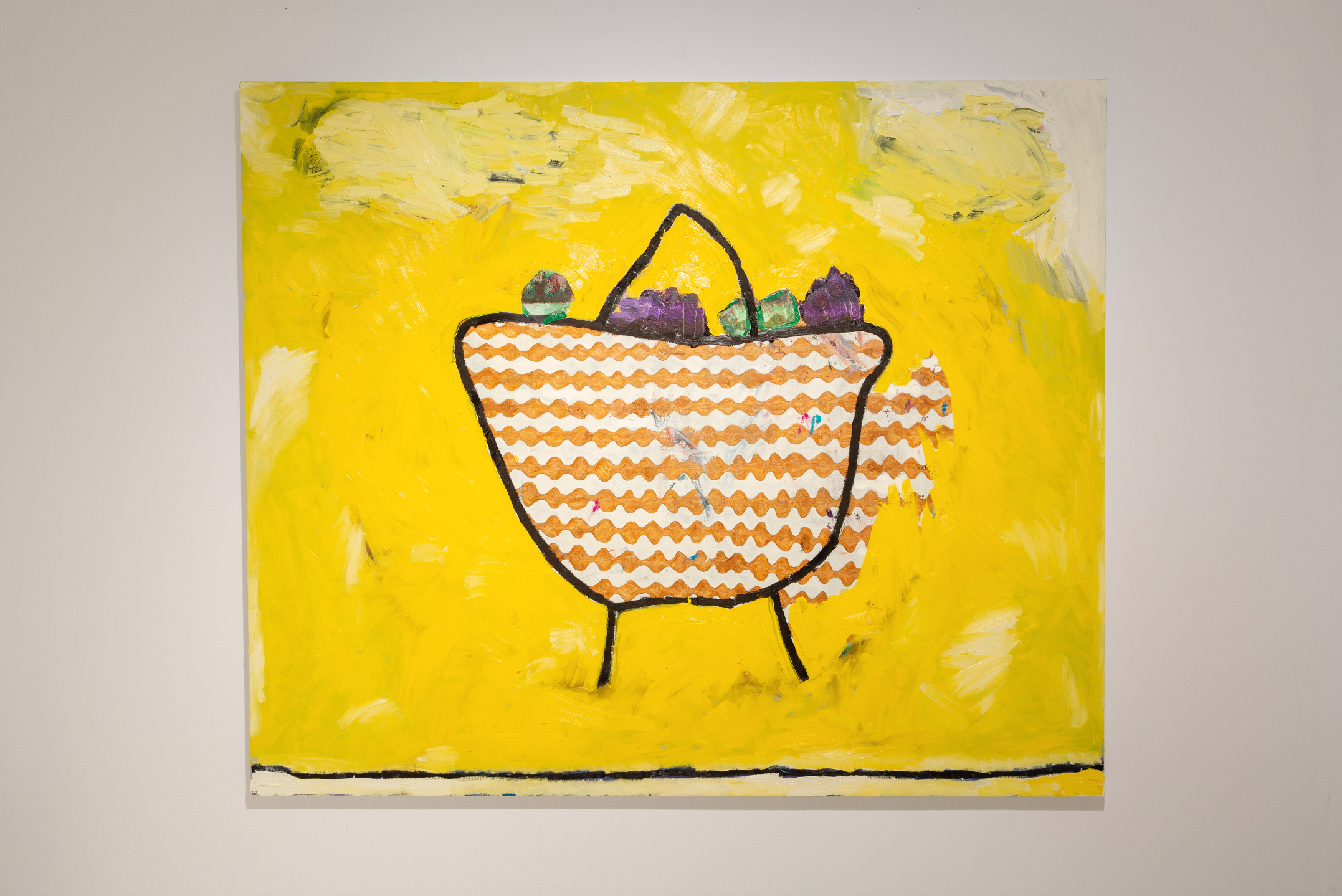 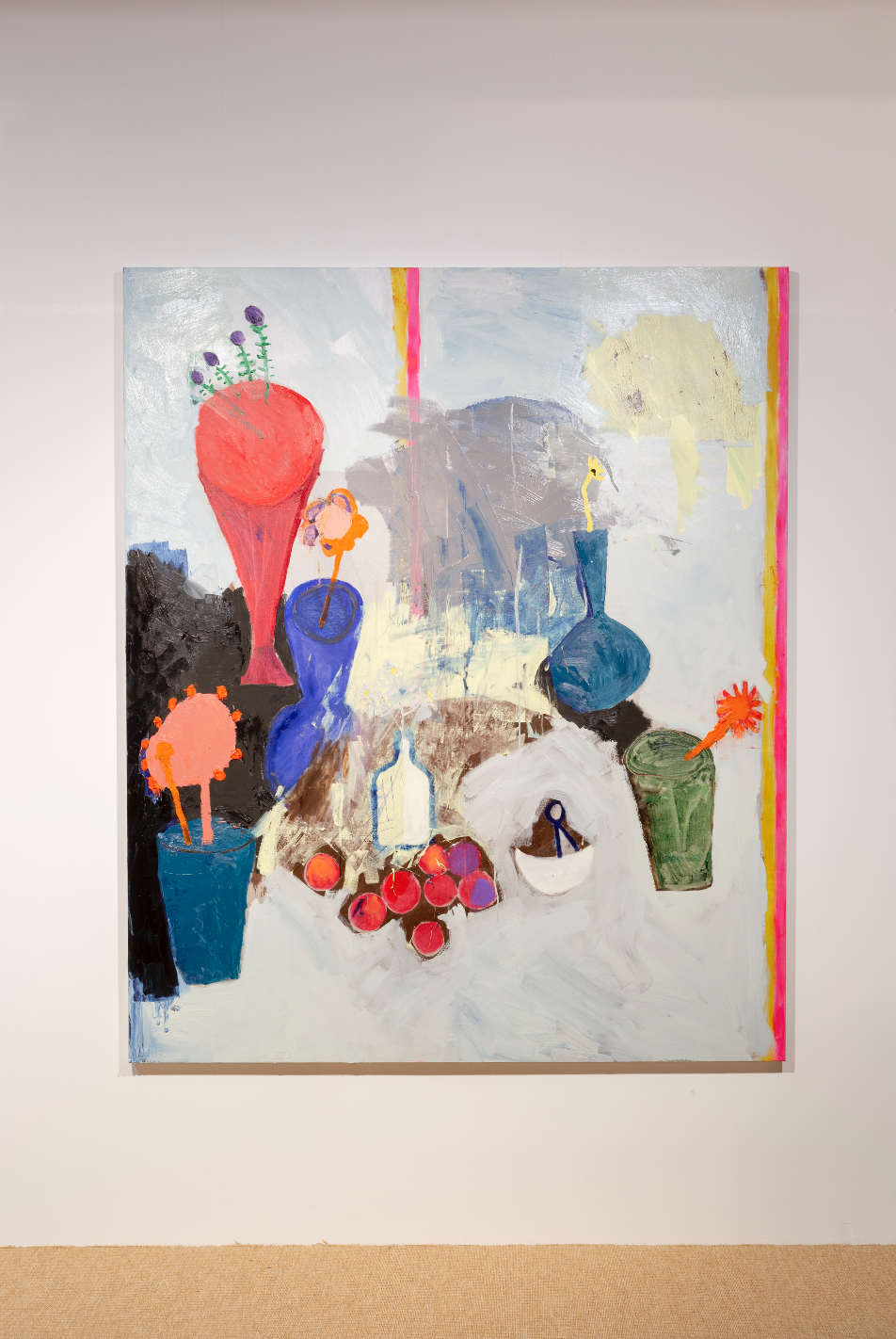 Take a 3D tour of the exhibition here.

Amid the uncertainty and pessimism of the current moment, Brazilian artist Ana Prata (Sete Lagoas, Minas Gerais, 1980) presents before the public an offering, a joyful, celebrative and good-humored universe, which remains however enigmatic, ambiguous and, at times, disconcerting.

Without following in the footsteps of the majority of her peers, Ana decided to be a painter. Trained to a large extent on the margins of the faculty of Fine Arts that she attended, she developed her language in close dialogue with other painters of her generation and of the previous one, who stood out in Brazil in the 1980s, emphasizing gestuality and researching new painting materials, contrary to the nature of the predominant production in the 60s and 70s —more conceptual, socially committed and interested in experimenting with new media.

Ana does not justify her painting nor the act of painting through great narratives or activist discourses, which again is an unusual attitude in these times. Her work is dispossessed and spontaneous. The artist moves smoothly through multiple references, which seem disparate at first glance. The visual culture of her adolescence, lived in a rock band and in the world of skateboarding, contaminates and mixes freely with the official History of Art, with a fascination for cave painting and ancient civilizations, and for the so-called popular iconography.

The title of her first solo exhibition in Madrid is also the name of the second album by the American rock band Jane’s Addiction, released in 1990. In addition to recalling the artist’s musical past — and present — Ritual de lo habitual draws attention and pays homage to the domestic environment that we have all experienced so intensely and endowed with renewed significance in recent months. The title also suggests a ritualized way of approaching life. If many of the rites and cults of the past have disappeared, Ana claims the possibility of celebrating the quotidian and living day to day as a ritual, that is, avoiding automatic habits and putting care first.

Tous les jours fête sur votre table is what Portuguese artist Lourdes Castro announced in her Livro de Cozinha (1961), perhaps in a mixture of irony and celebration. Almost sixty years later, Ana’s still lifes are also an invitation to a feast or banquet of the senses. Produced without resorting to real arrangements or photographs, her compositions are born from the artist’s imagination and are constructed during the pictorial process, which is, in itself, in addition to a material exercise, a mental, spiritual and ritualistic doing. From quick gestures and ink overlays, simple and schematic shapes emerge, reminiscent of children’s doodles.

The drawings, made with gouache on paper, are ambiguous and escape univocal readings. With warm, fluorescent or metallic colors, they make up a reduced vocabulary of signs, surrounded by a rounded edge. Within this limit, which could represent the edge of a table, the frame of a mirror or the oval of a face, the different elements are repeated and articulated, suggesting multiple possibilities: a table with pots, oranges and bananas; two eyes, a nose and a mouth; a Mexican wrestling mask; a school sheet with the diagram of a cell; a cartoon monster, etc. The dissonance between planes, objects and points of view gives the different compositions a cubist air. This fragmented and somewhat fantastic aspect is reinforced by the fact that Ana brings distant universes closer together and thus avoids locating her scenes in a precise space-time: alchemy coexists with the Amerindian tradition; Cosmetics from Ancient Egypt, oils, perfumes and ointments stored in precious jars of translucent alabaster are confused with the objects arranged in a rococo dressing table or with the makeup case of the past carnaval.

The oil paintings, consisting of thick layers of pigment, constitute, even more so, horns of plenty. They are true pagan altars whose limits are defined by the frames that give a body to the cloth. The relationships between the figure and the background become more complex and the boundaries more blurred. Geometric patterns, painted or previously stamped on the fabrics, suggest a picnic tablecloth, a stained glass window, a 1950s table, the weft of a basket, or many cherries in a pot. In the darkness of the receptacle that is the painting itself, there is a world of objects —which, in turn, contain other objects— with different scales, histories and textures. A world that cannot be fully deciphered with the sense of sight and which invites other forms of perception.

Still lifes often trigger time travel and, if we think of baroque vanitas, they will frequently be interpreted as meditations on the transience of time and the finiteness of life. However, throughout history the genre has admitted a variety of color temperatures and moods: we need only think about what goes from Zurbarán to Caravaggio, from Claesz to Gris, from Chardin to Cézanne or from Morandi to Matisse. As far as we know, few women have ventured into these lands in past centuries: Josefa de Óbidos or Clara Peeters in the 17th century, Anna Maria Punz in the 18th, María Blanchard in the early 20th, and perhaps a few more. Curiously, this is a genre that transports us to what is most common and even banal, and that is why it brings us closer to the customs of our remote ancestors.

In the few fragments of walls that have remained from the Roman villas we encounter, possibly, the first preserved still lifes. Composed of food, animals and vegetables, as well as objects used in banquets or for the preservation of food —such as plates, pots, cutlery and glasses— they sometimes also included masks, money, and instruments for sacrifices, games or writing. It is an irony of fate that —connecting with Ana’s work—, many of those wall paintings from the 1st century BC, joyous and celebratory, and magical at the same time, radiated over dining rooms and other domestic spaces what the Romans called xénias, gifts that the hosts offered to their guests as a sign of hospitality.

The artist lives and works in São Paulo, Brazil.