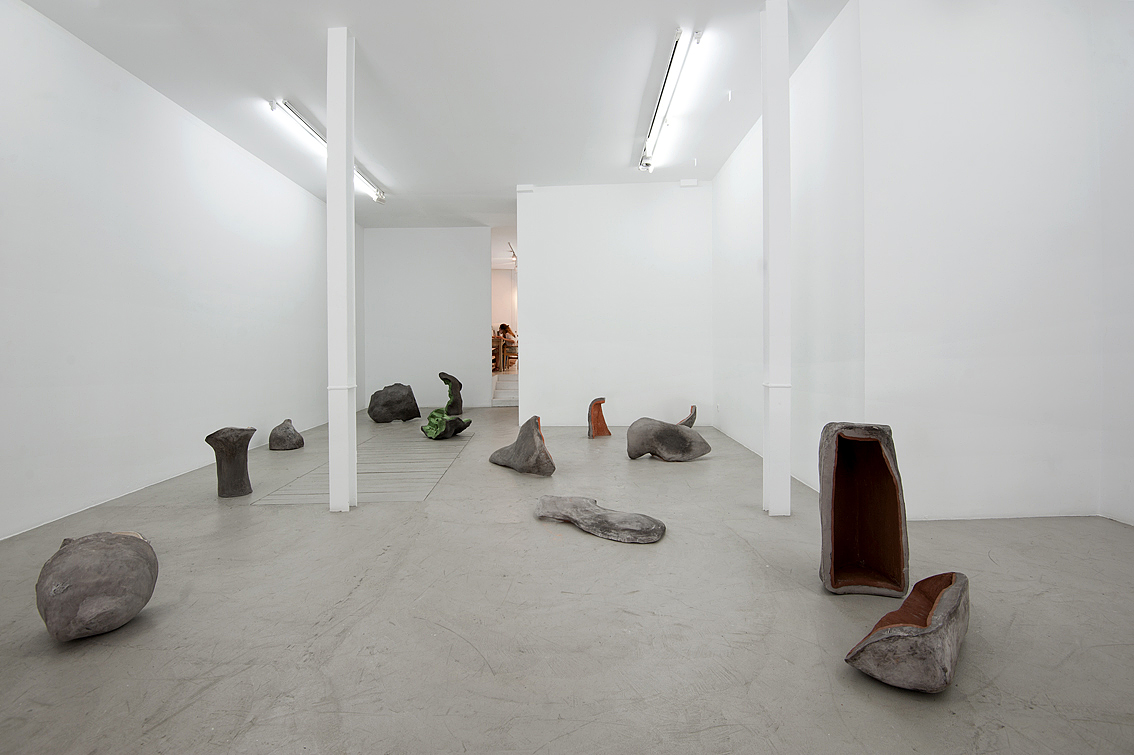 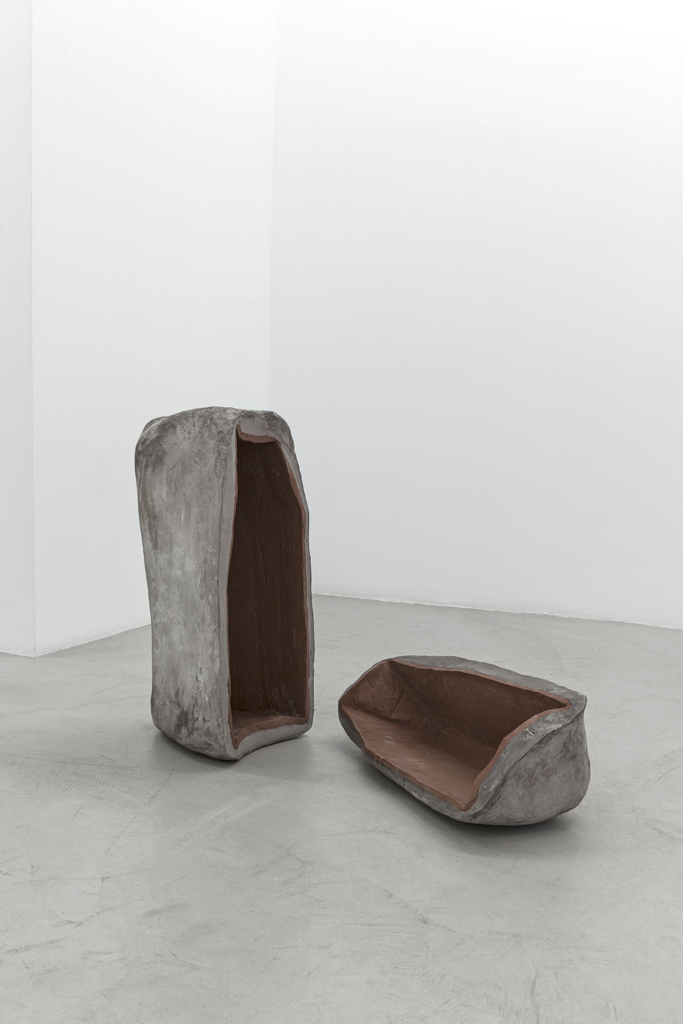 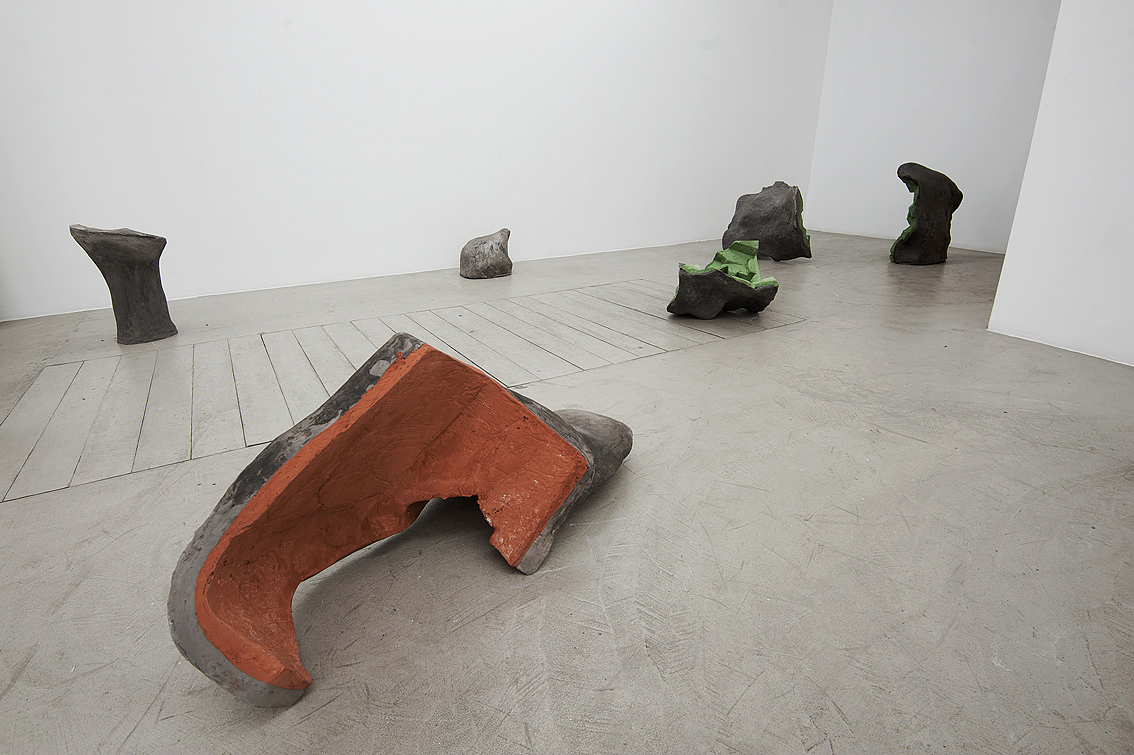 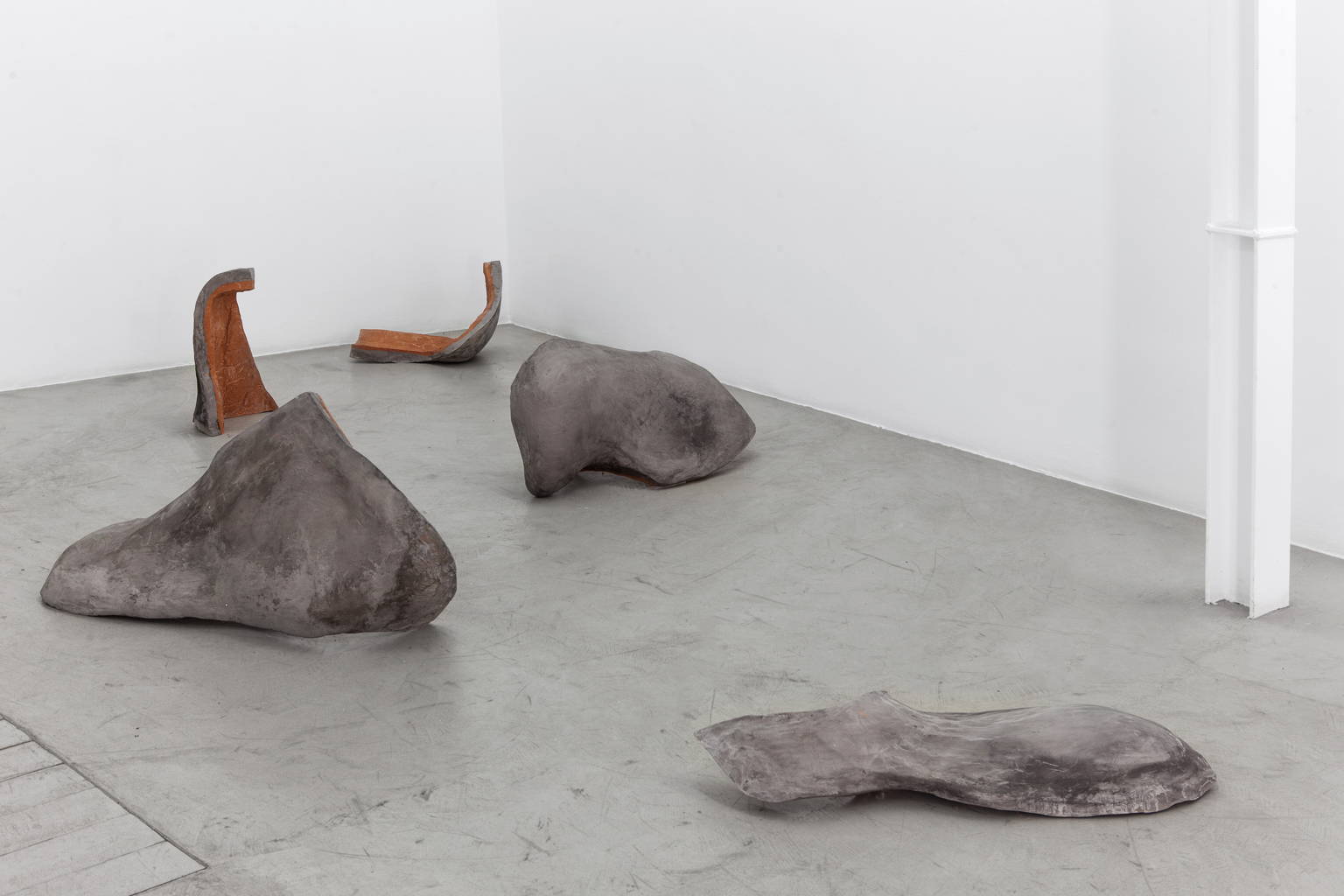 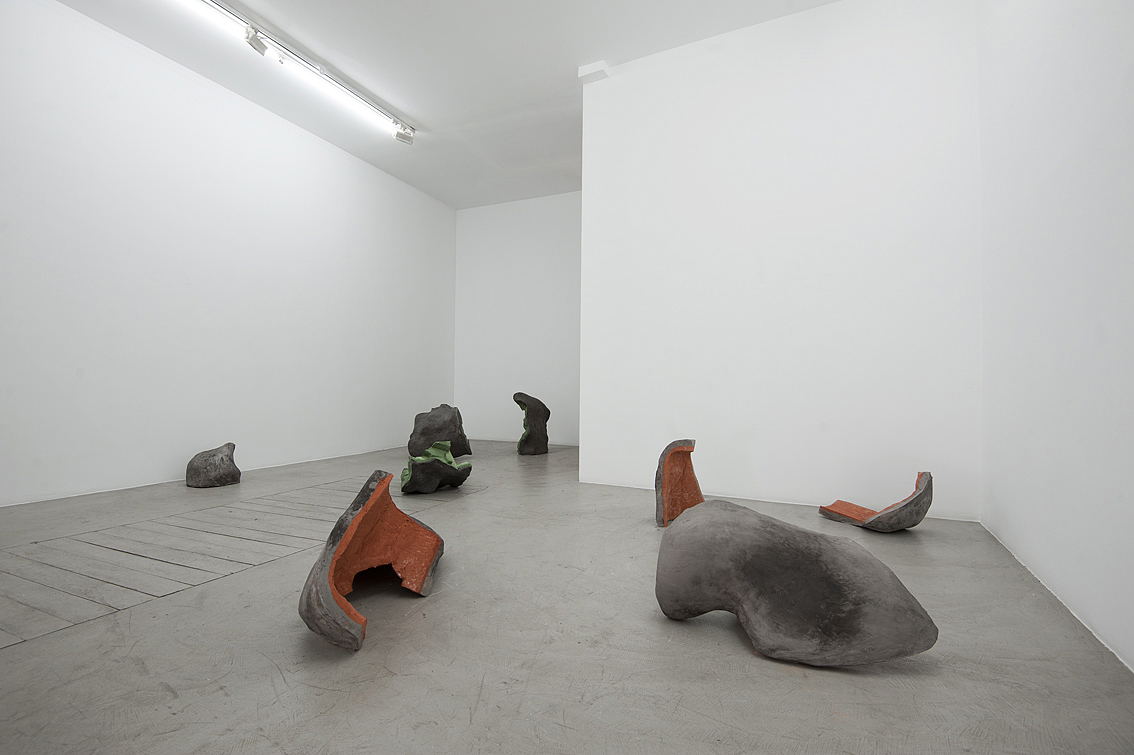 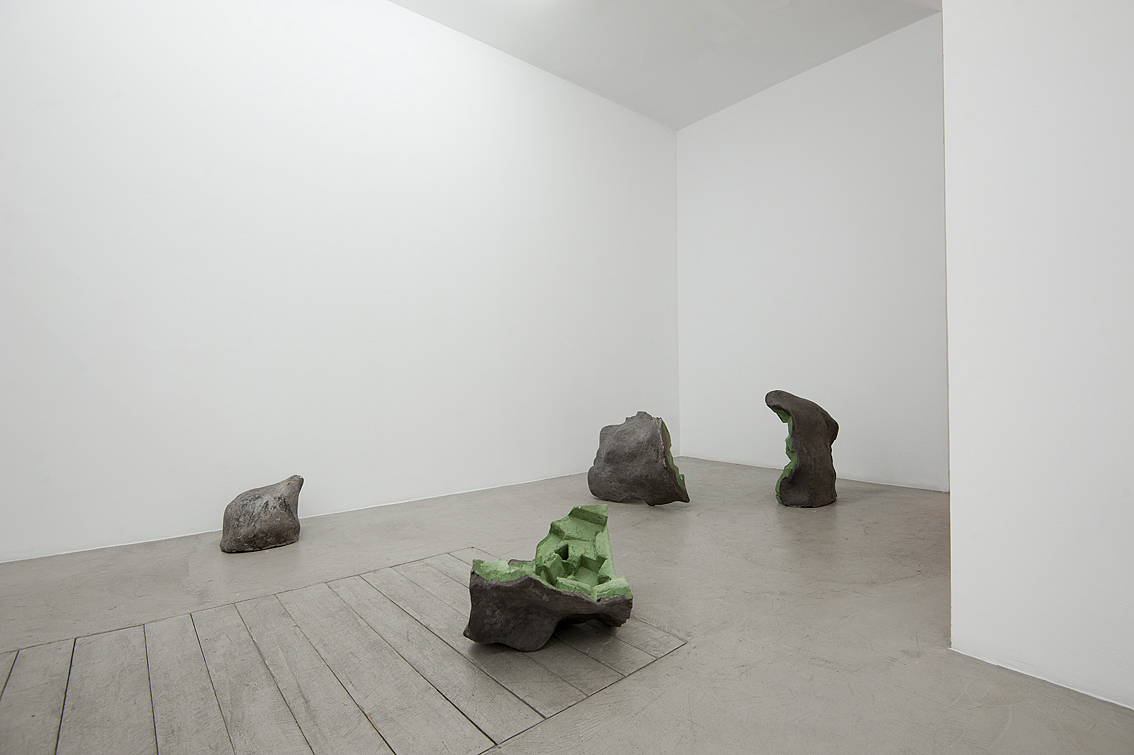 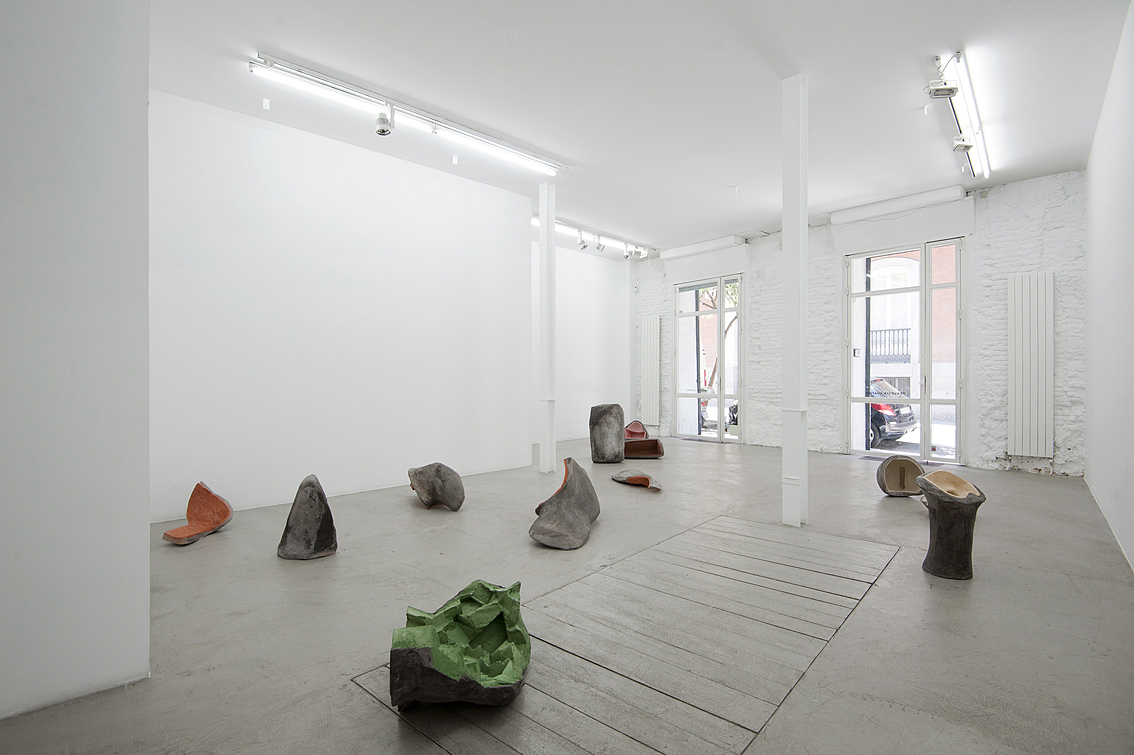 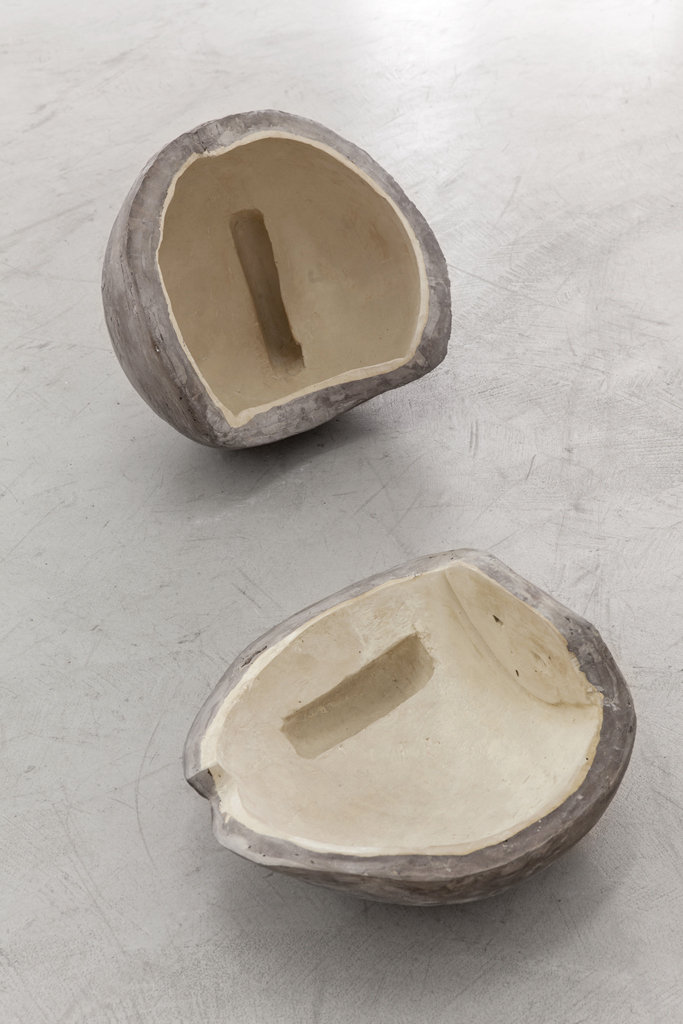 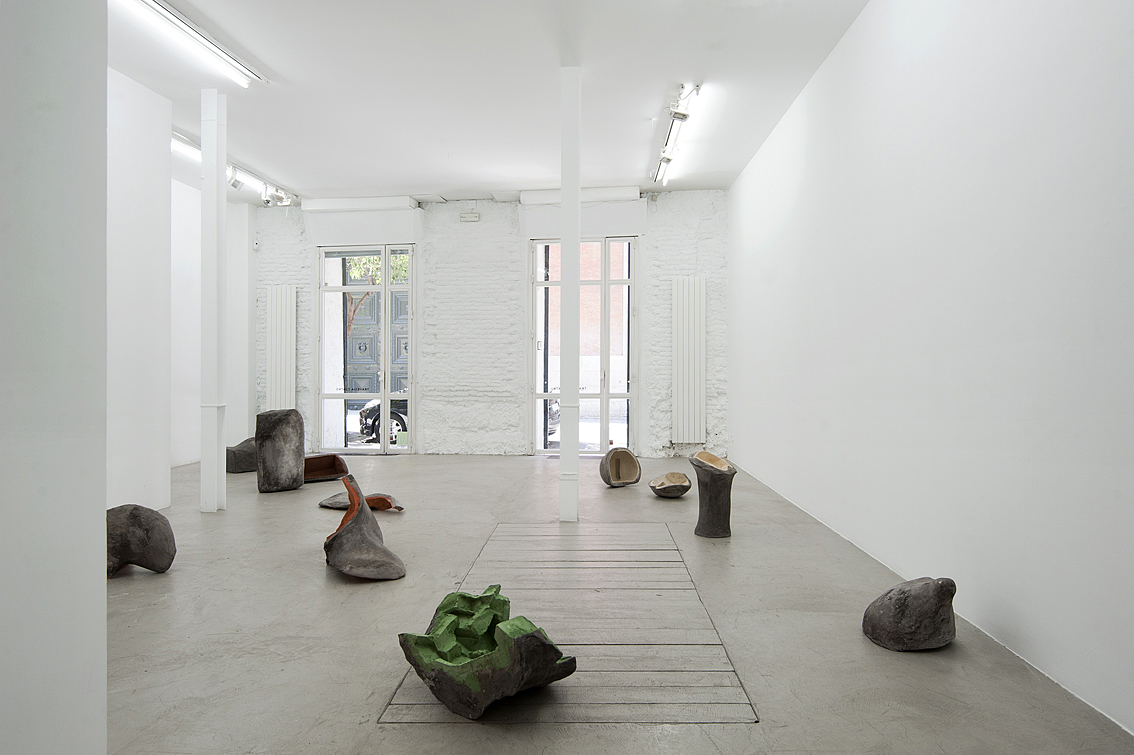 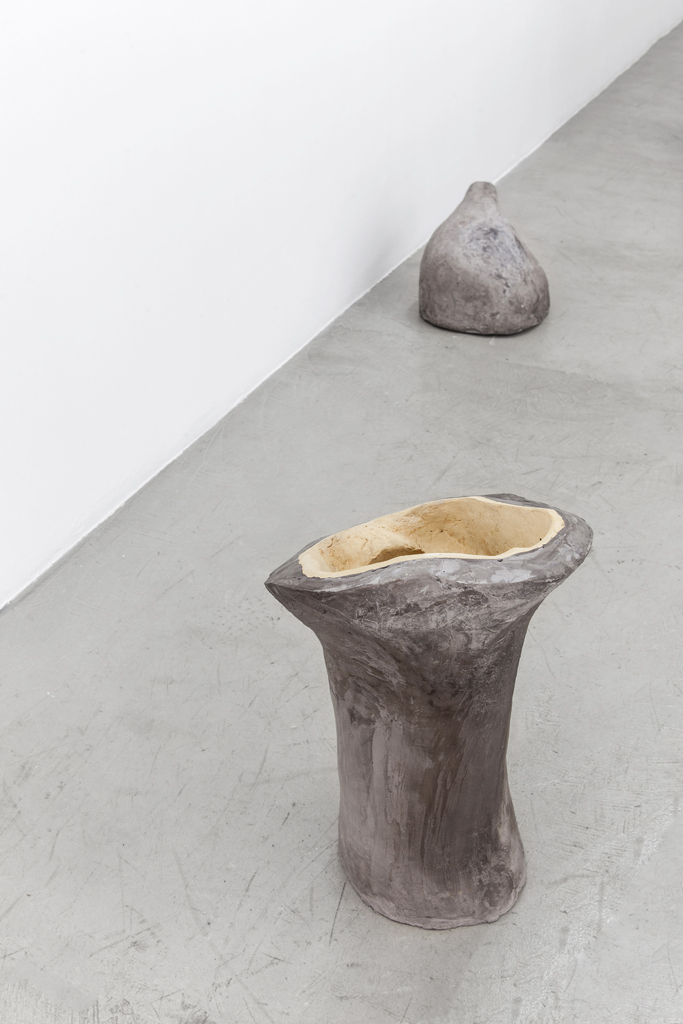 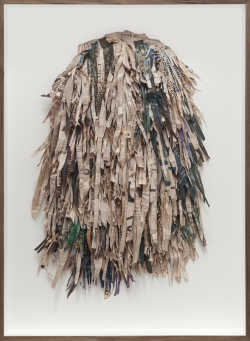 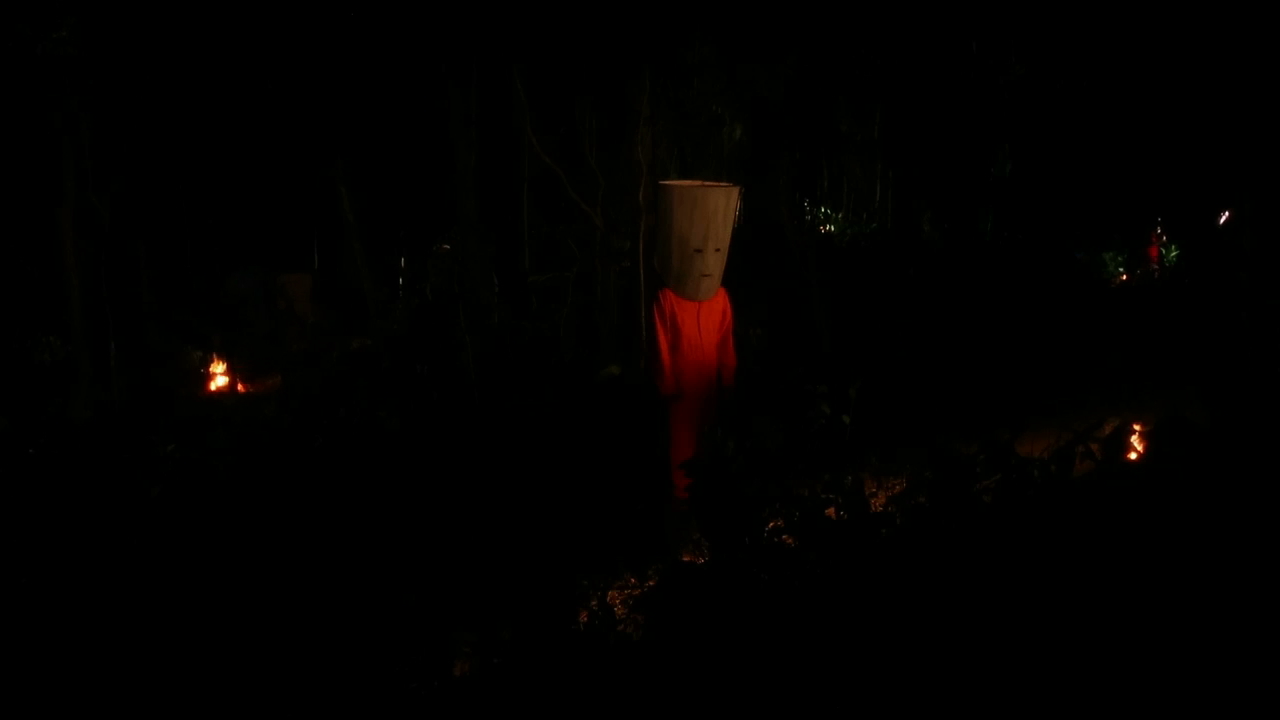 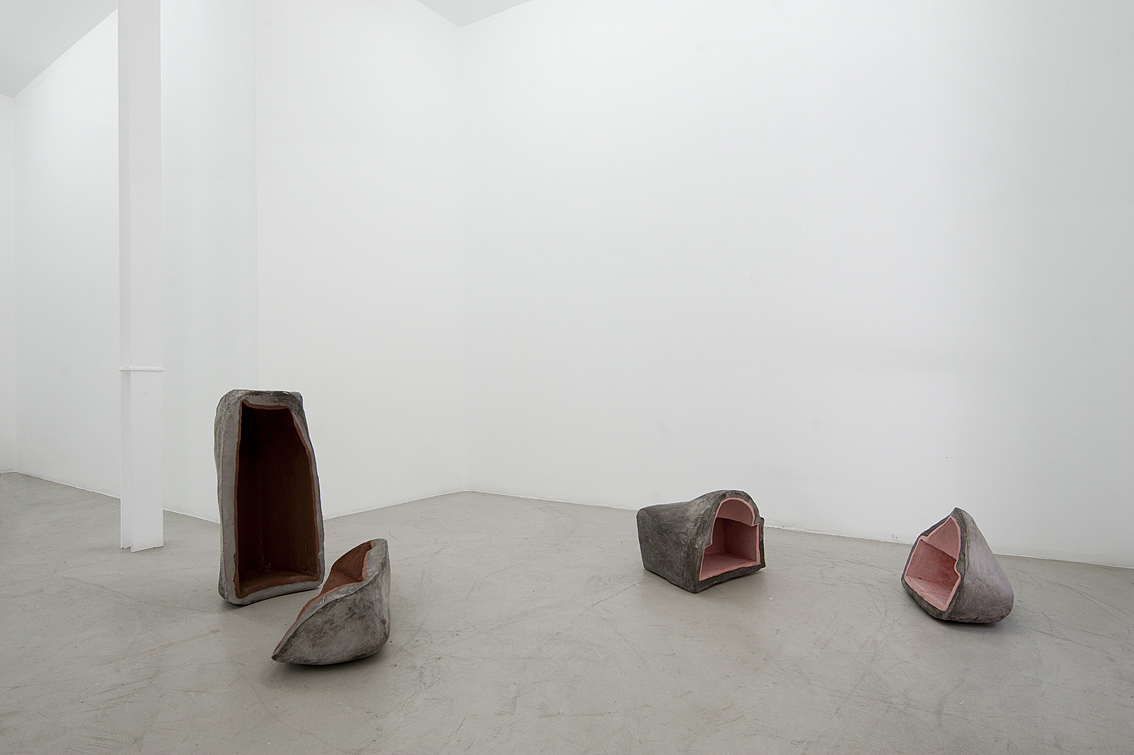 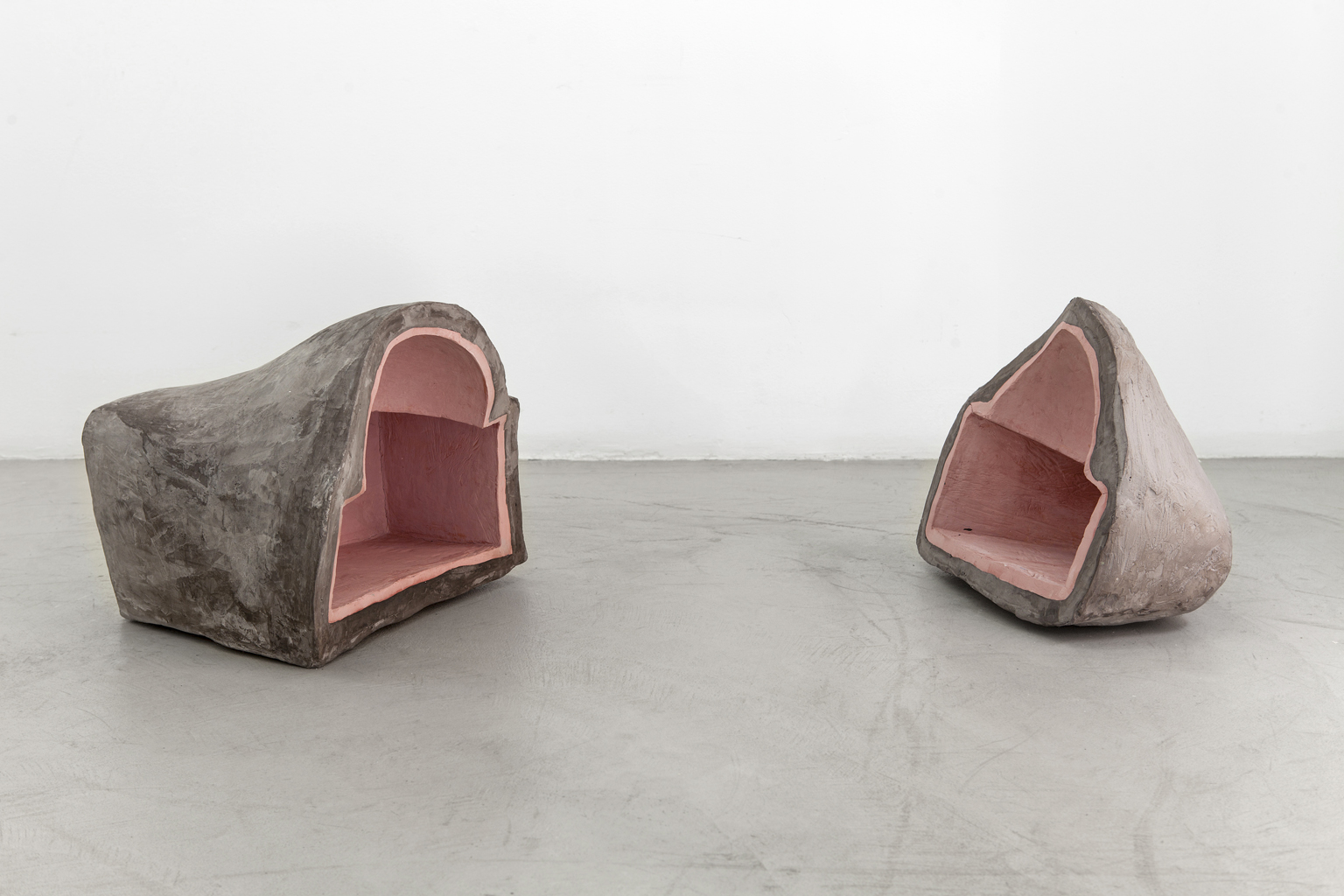 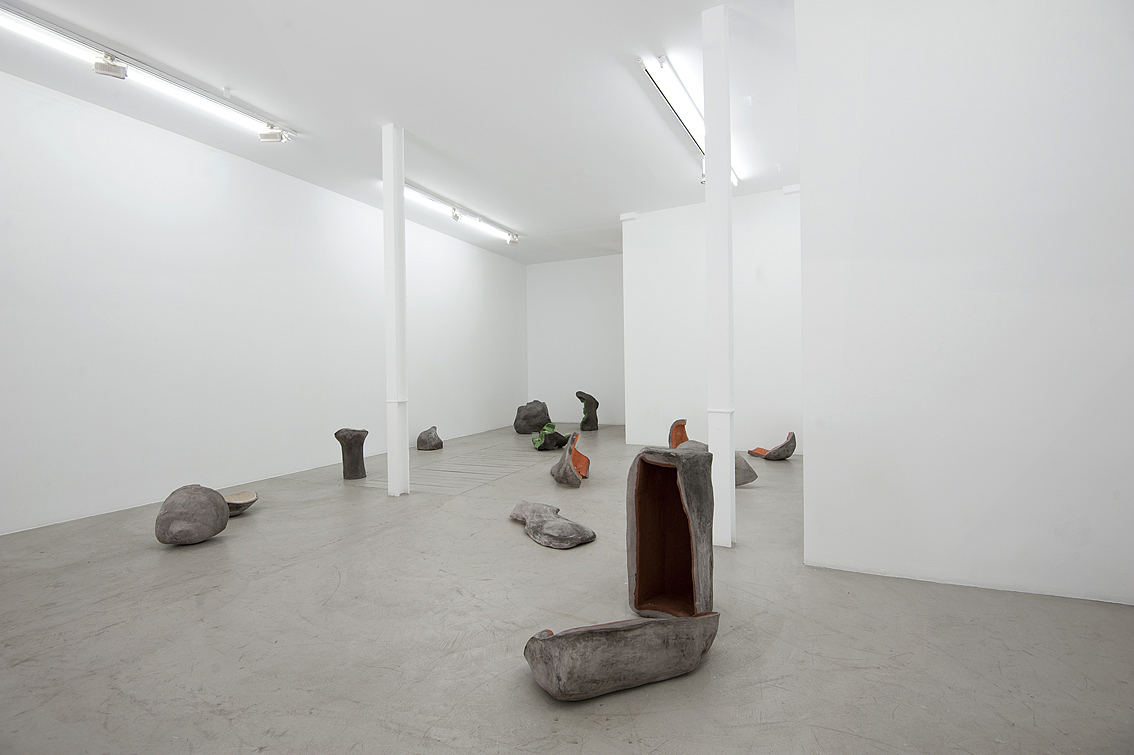 Travesía Cuatro is pleased to present LOS AYUDANTES (The Helpers), the gallery’s first solo exhibition by the artist Sara Ramo. The artist shows two works: the video which lends its name to the exhibition as a whole, and a group of sculptures titled Matriz y la Perversión de la forma (Variación I).

In the video, twelve masked creatures wander through a nocturnal landscape while playing musical instruments. Cloaked in shadow, they only become fleetingly visible in the flickering light of bonfires, emerging and vanishing again in a magical, uncanny atmosphere.

For the series of sculptures Matriz y Perversión de la Forma I (Matrix and the perversion of form), first presented at Galería Fortes Vilaça, Sao Paulo, in 2015, Sara Ramo cast moulds from the masks used in the video. During the process, the masks themselves were destroyed and instead of using the casts as structures, it is there covering that becomes the actual sculpture.
In the words of the artist, “the new sculptures in Matriz y la Perversión de la Forma (Variación I) add a layer of complexity to the previous process and to the idea of the matrix. Responding to a desire to create new forms, I make use of repetition and of manual—-and therefore imperfect—-copies of the previous masks. The matrix in this work is really the empty space at its core. In other words, the place from where the form emerges, the cast that would apparently be what protects, what is solid, is now broken and thrown aside to give life to a new form. And this, though also the core, is an empty space wrapped in cardboard and paper. What is produced here connects the original and the leftovers, and what is left of the concrete, which is to say that all that remains of the stone is precisely what is around it, like wrapping, like a shell, like moss that clings to it, like a plague.”

Through a process of repetition of the exhibition and the reproduction of the masks that appeared in the video images, the artist opens up a crack in the idea of the original and the reproducibility of form, now displaced towards another point in the chain (the video). The cast made from the destruction of the piece to be reproduced is a conventional sculptural technique but here the purpose is not to reproduce any form. The cast or mould is conceived in itself as the ultimate and only form, one that breaks the chain that links the piece and its technical reproduction, introducing the need to remake the concept of origin every time.

What the artist ultimately conveys to us is the fabulous, mythical and constructive quality that underpins the idea of an original, which must be revised and even reinvented every time it is presented. It is no accident that her video, Os Ajudantes, ends at dawn, when the vegetation begins to take over the screen and we hear the sounds of animals. However, in a fleeting glimpse just before the end, a final figure emerges and vanishes again as if life—-that ceaseless maker of forms—- had swallowed it back into the origin, and turned death into the matrix of a new cycle.