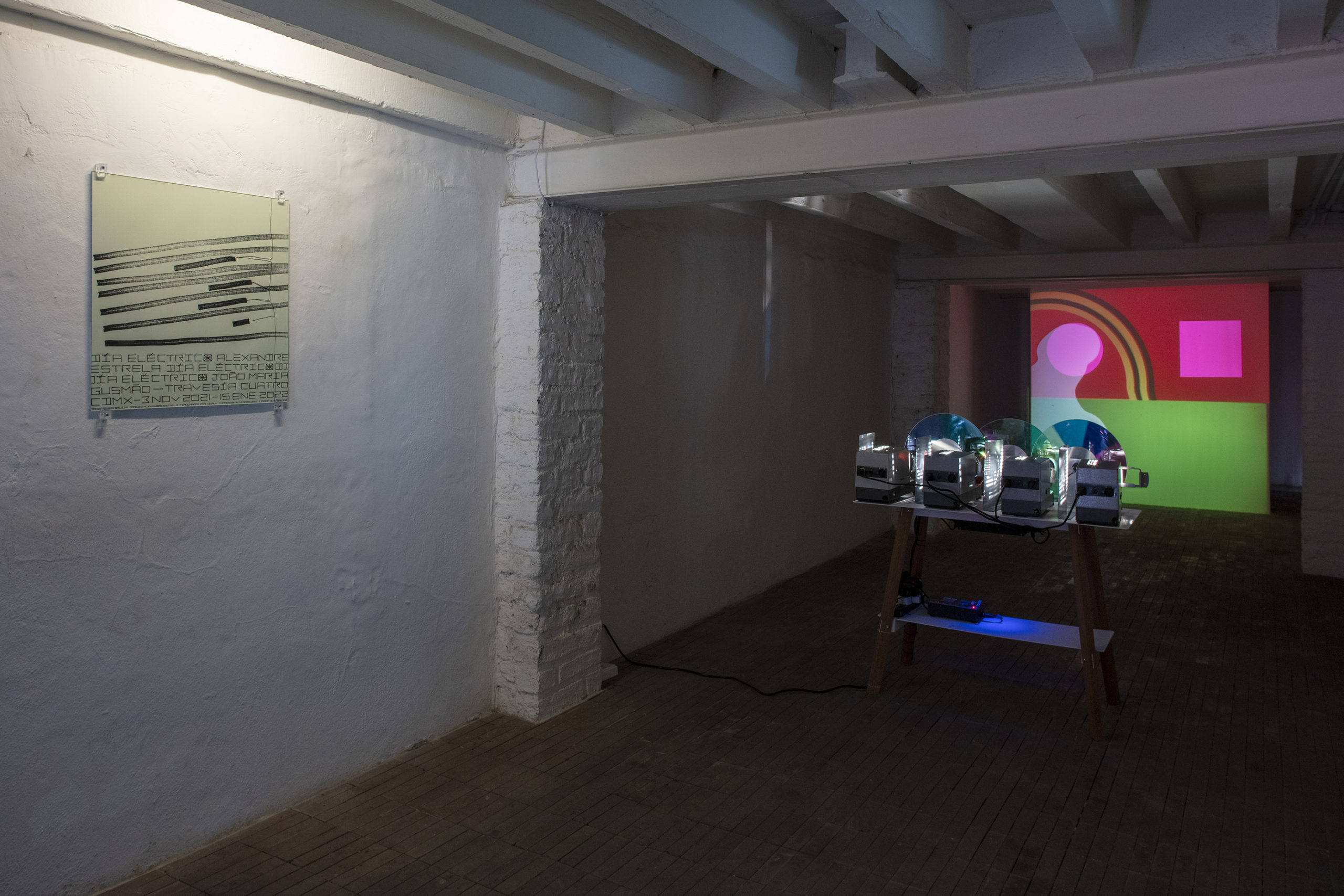 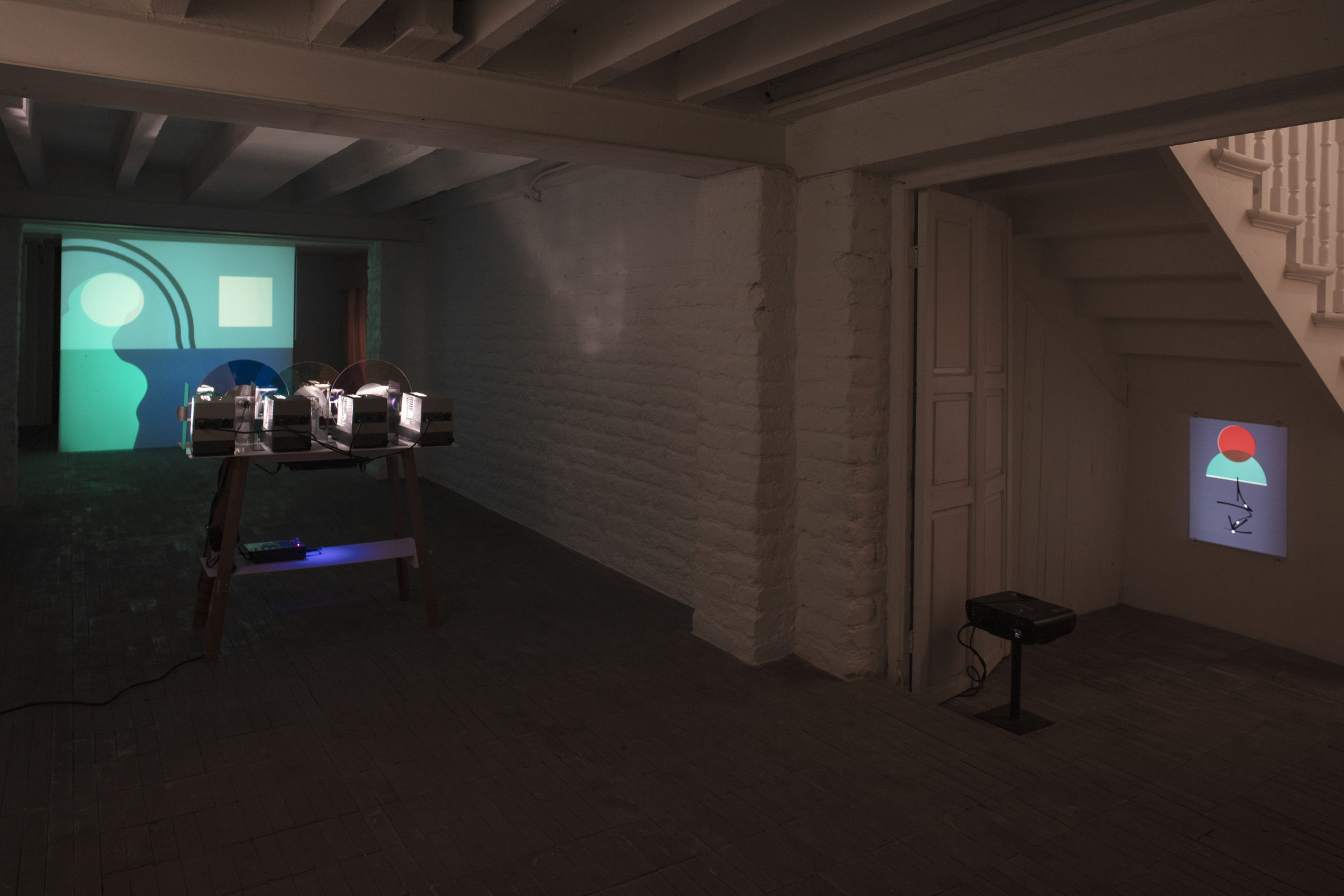 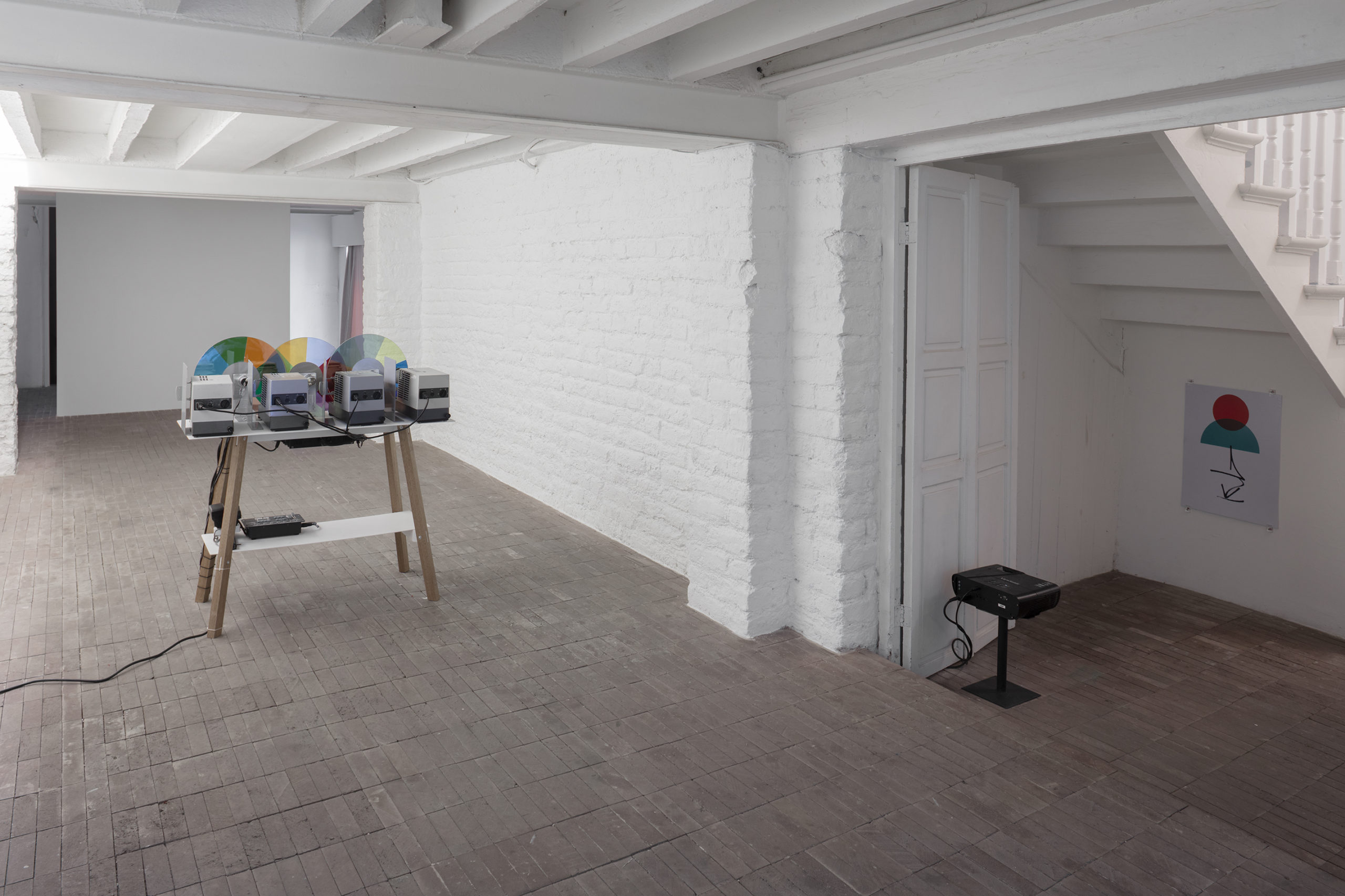 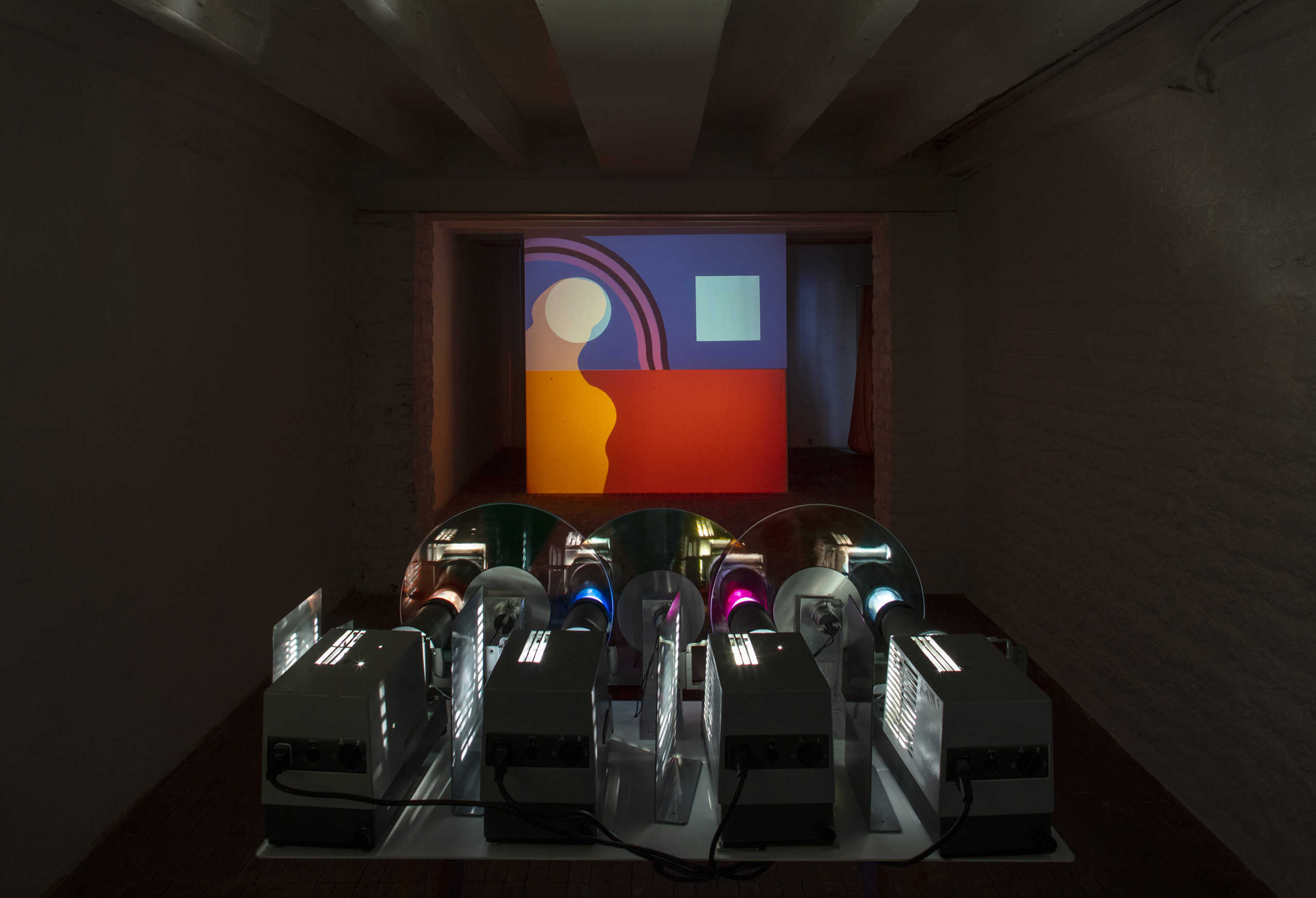 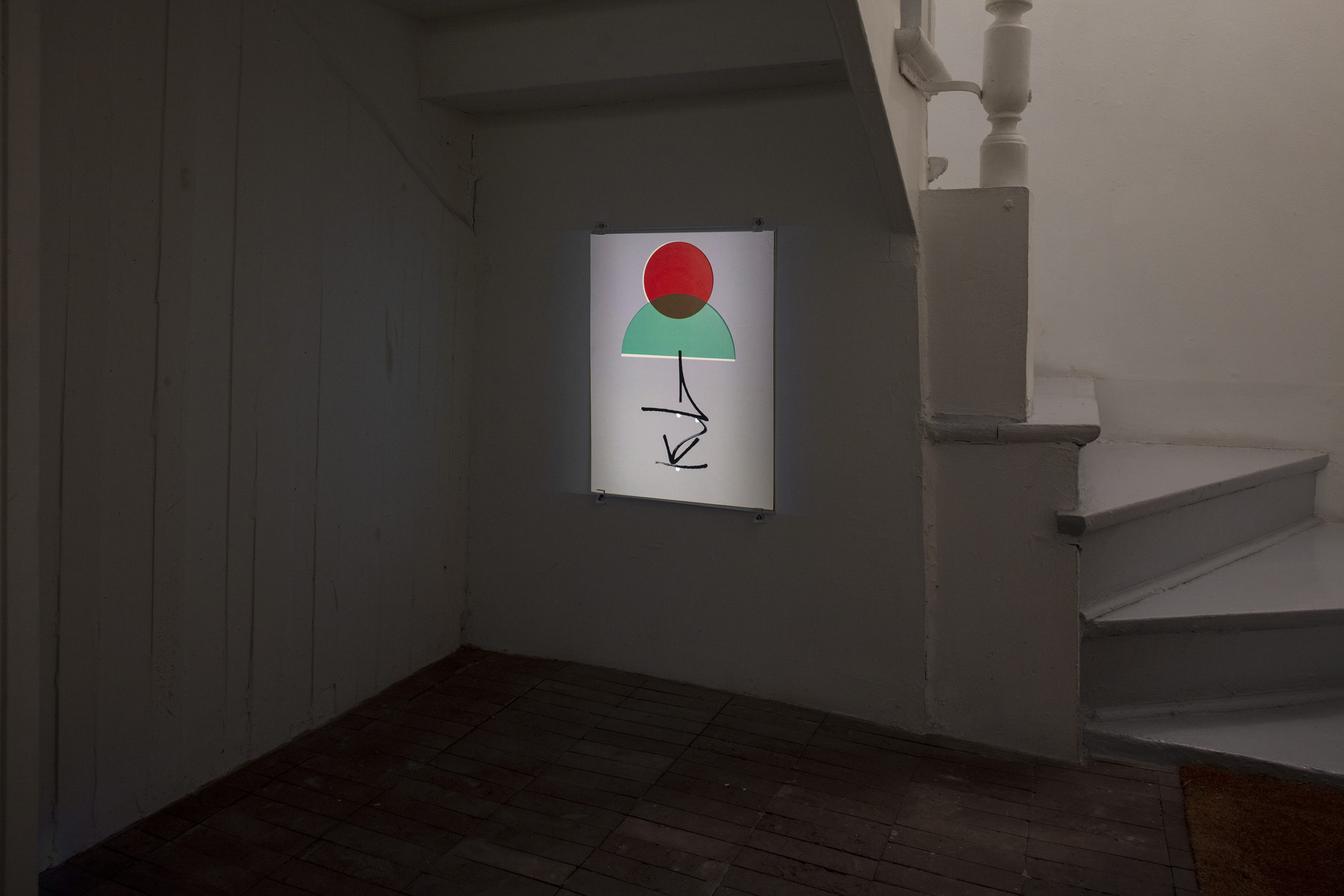 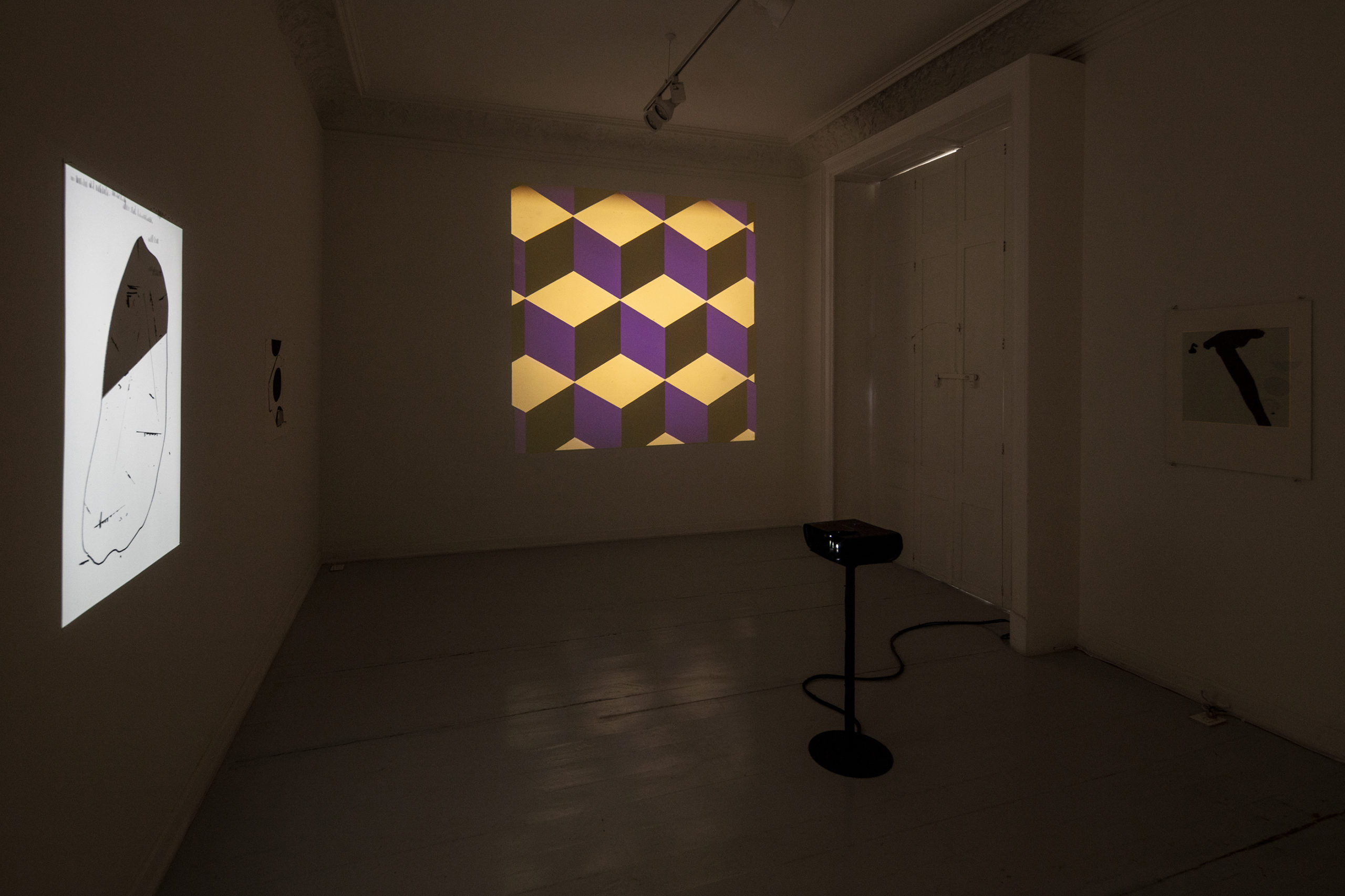 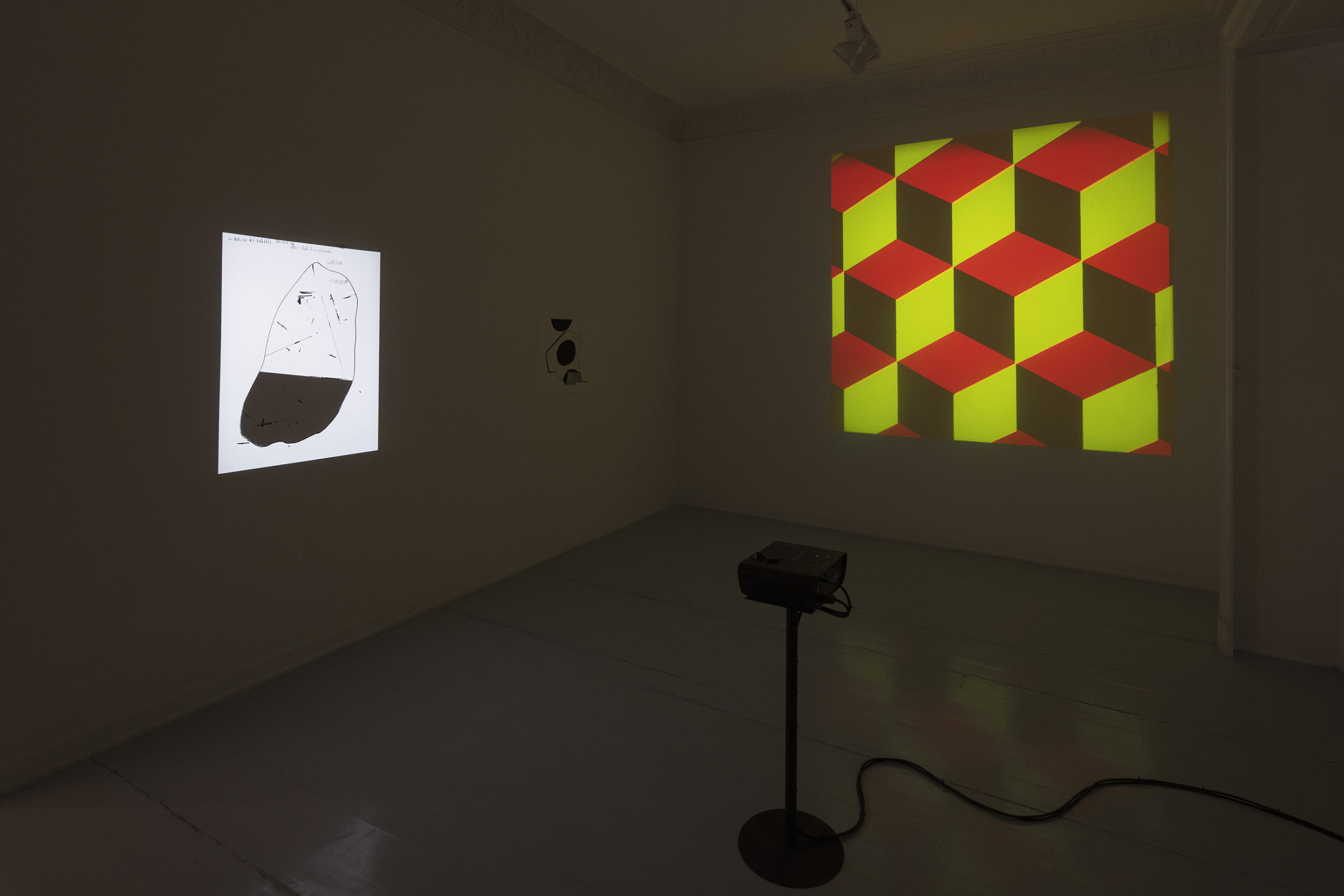 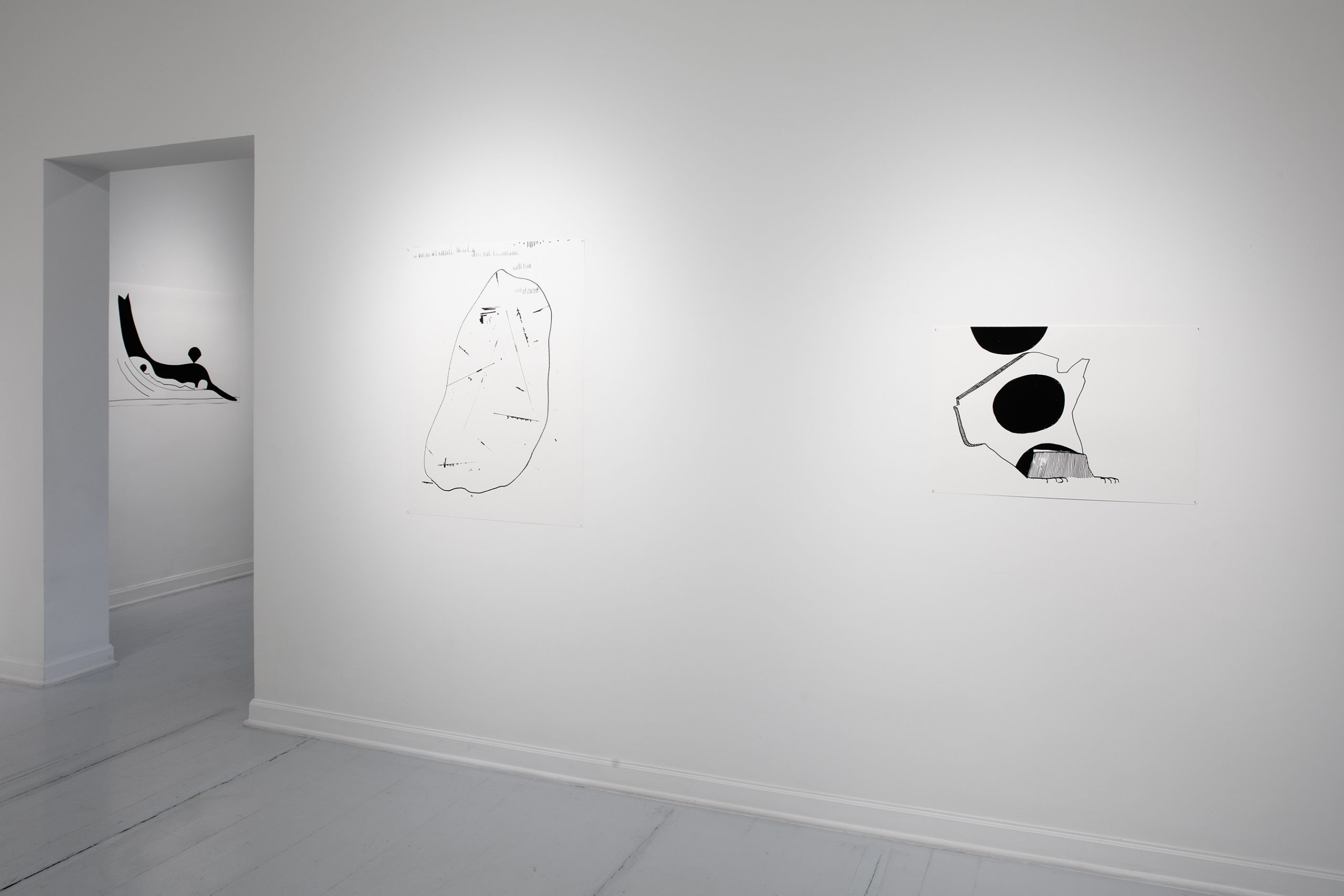 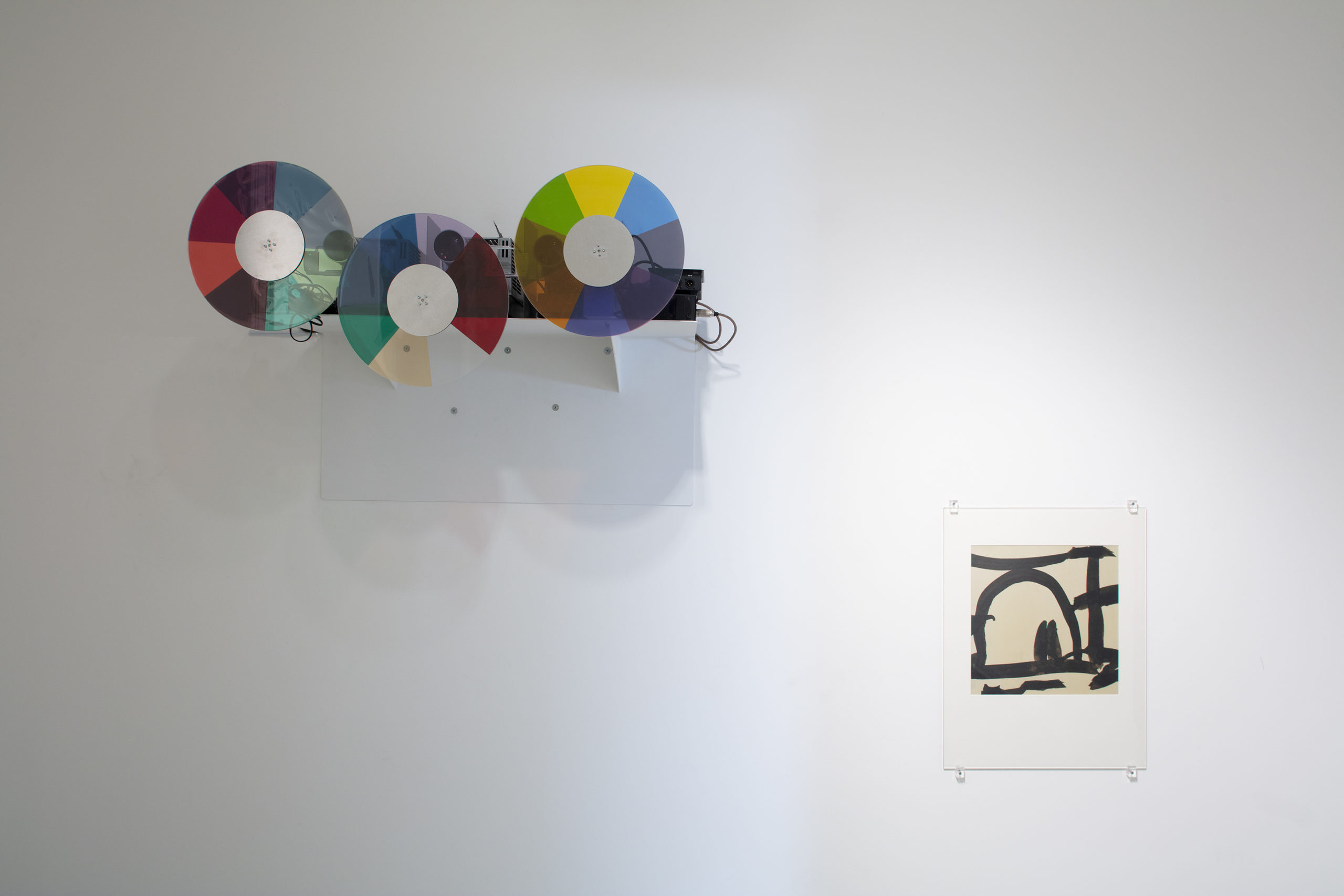 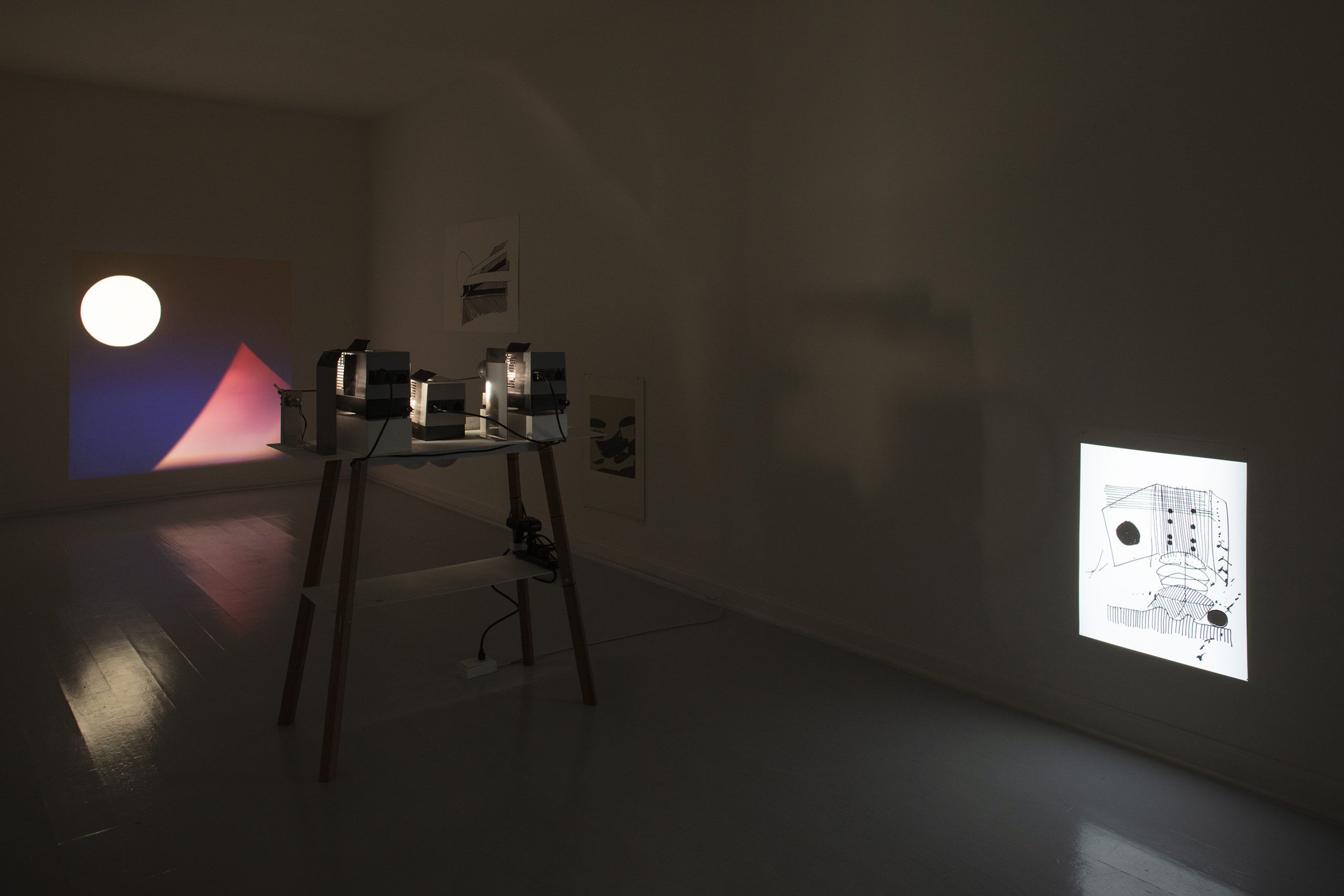 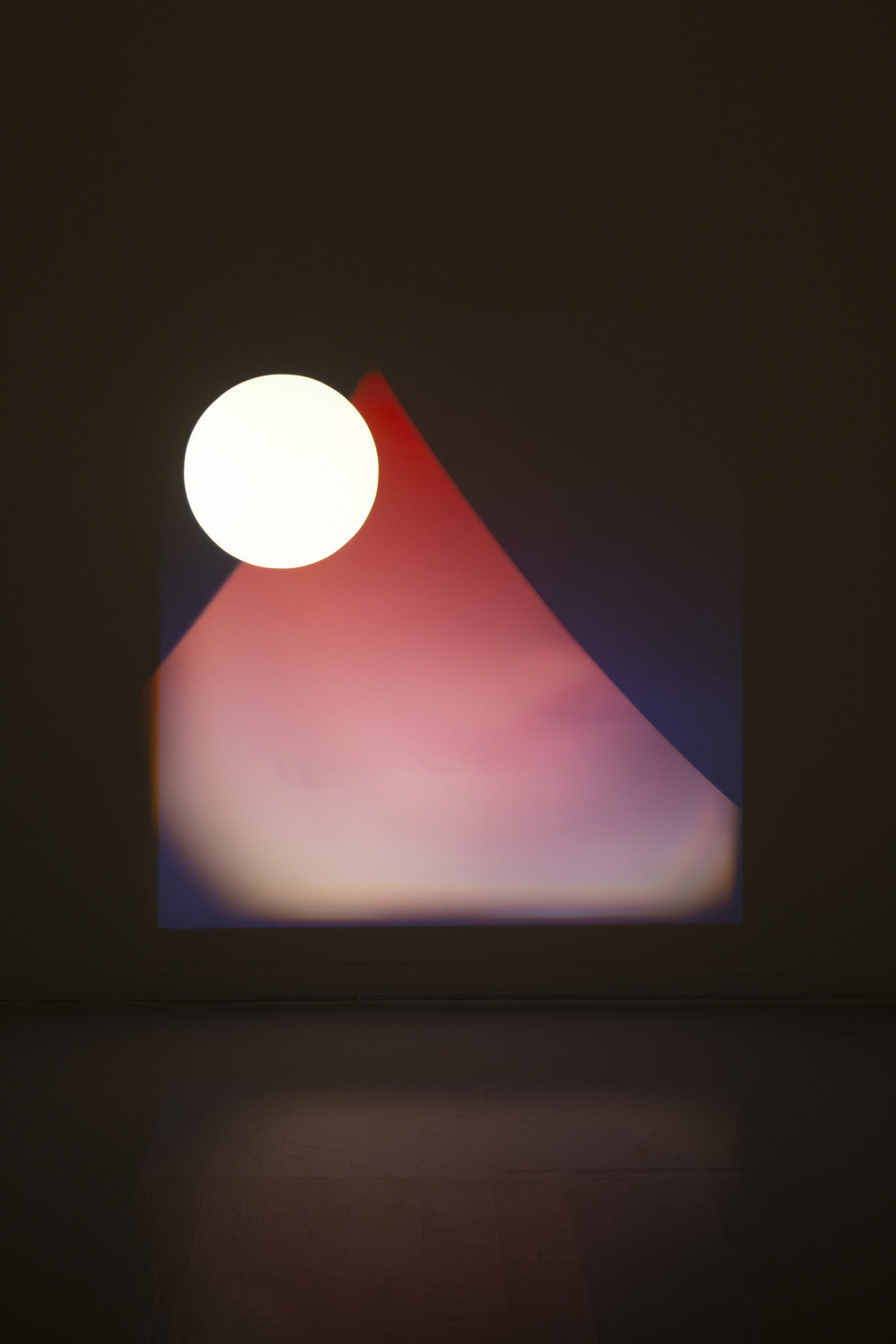 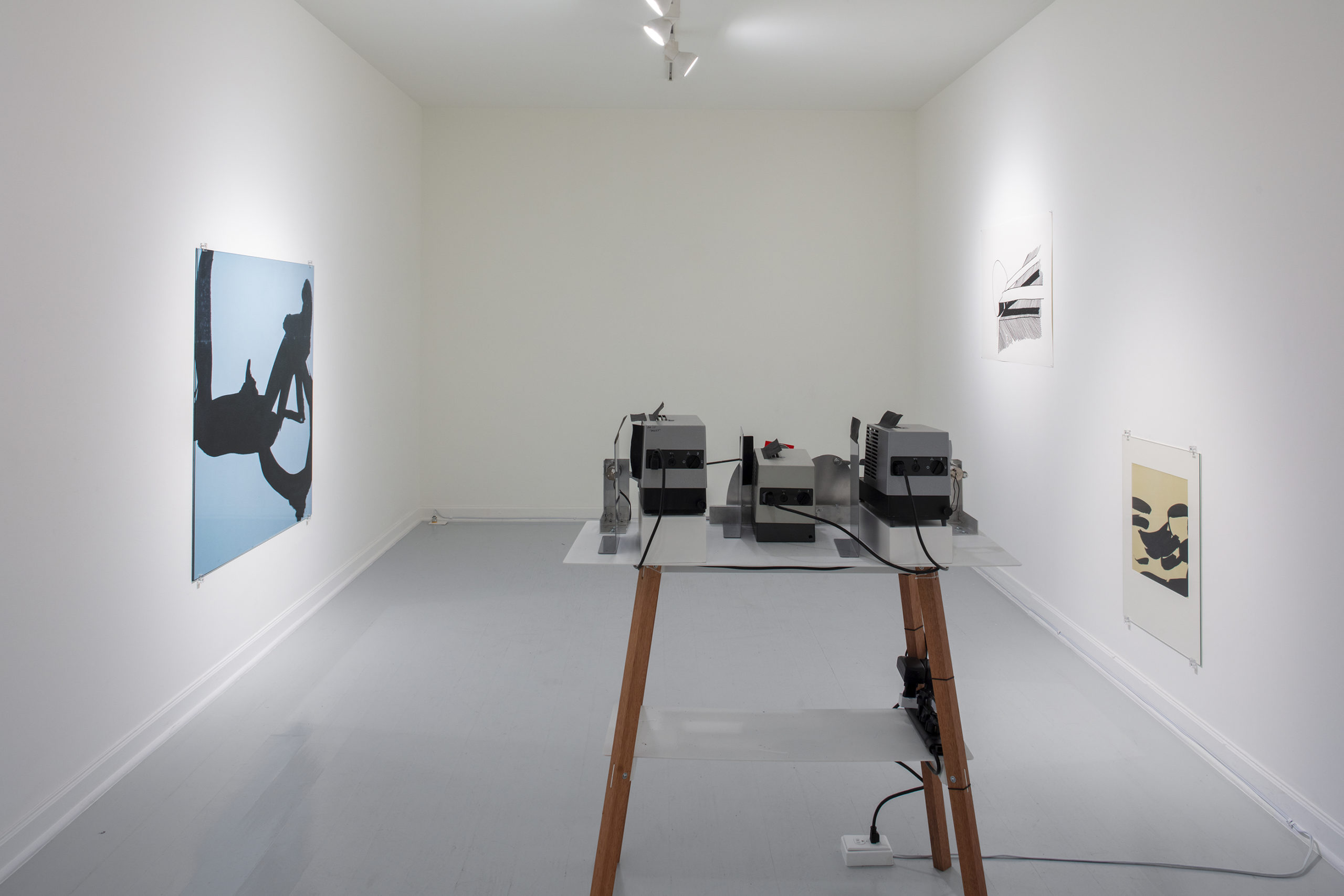 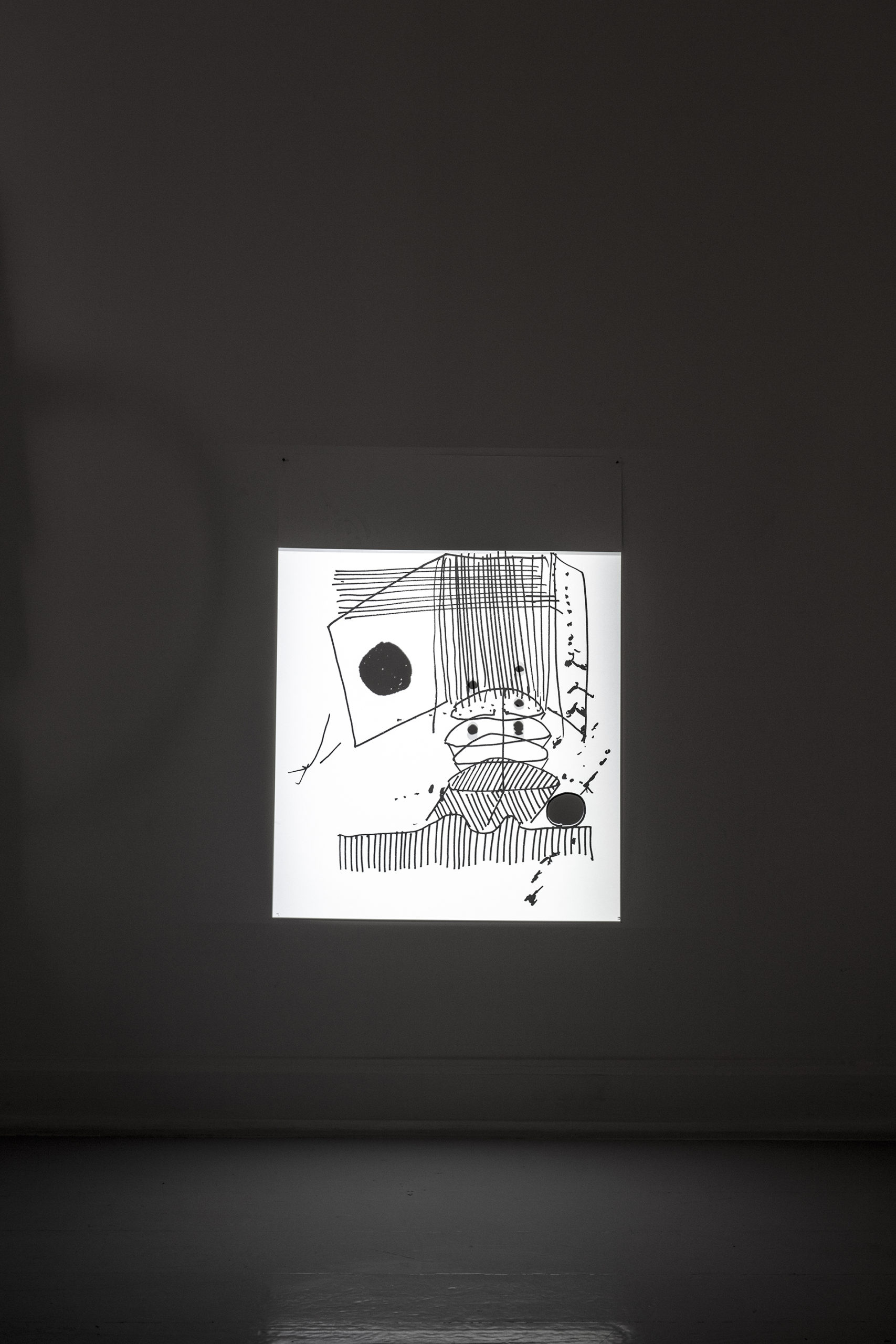 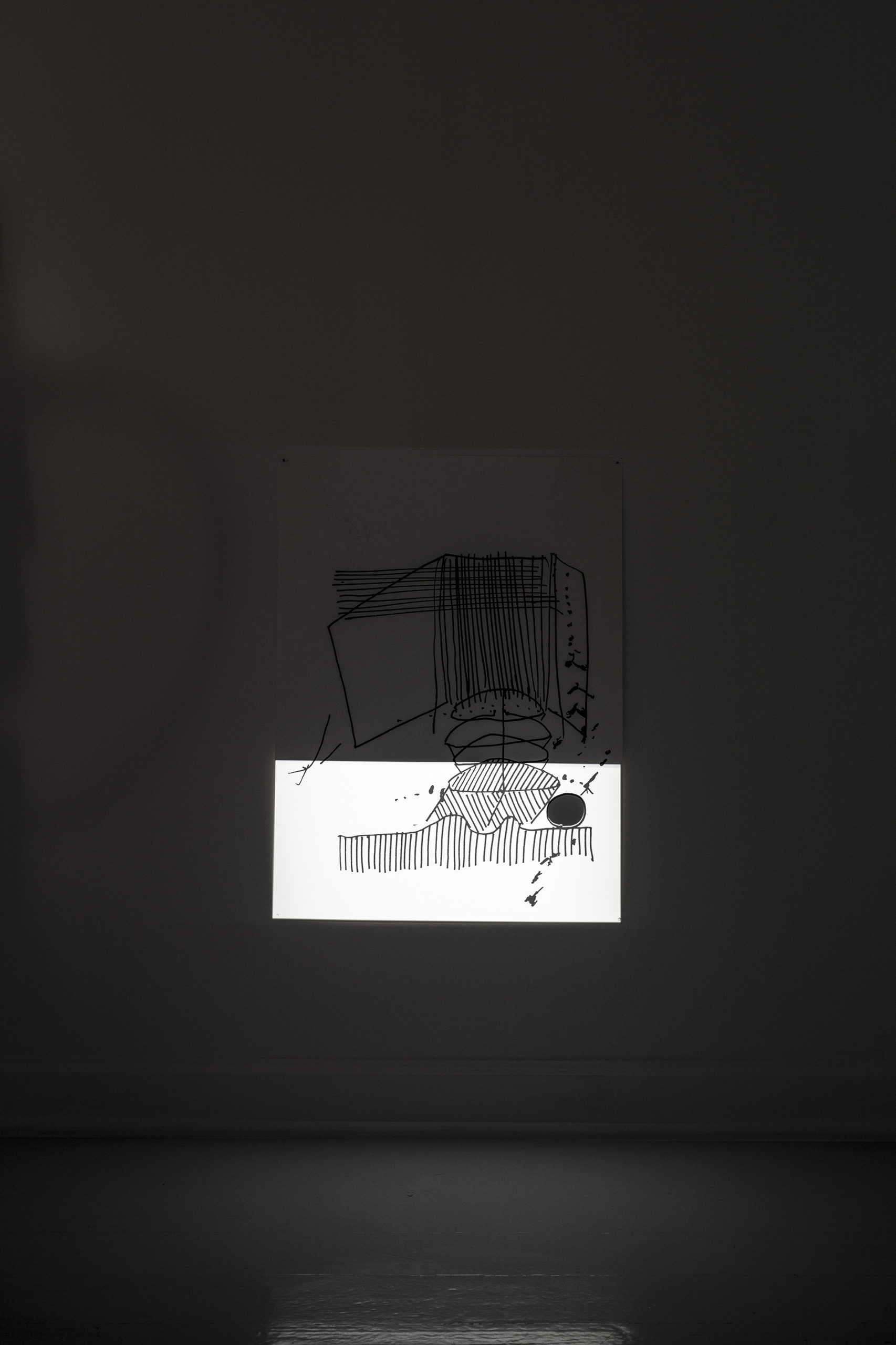 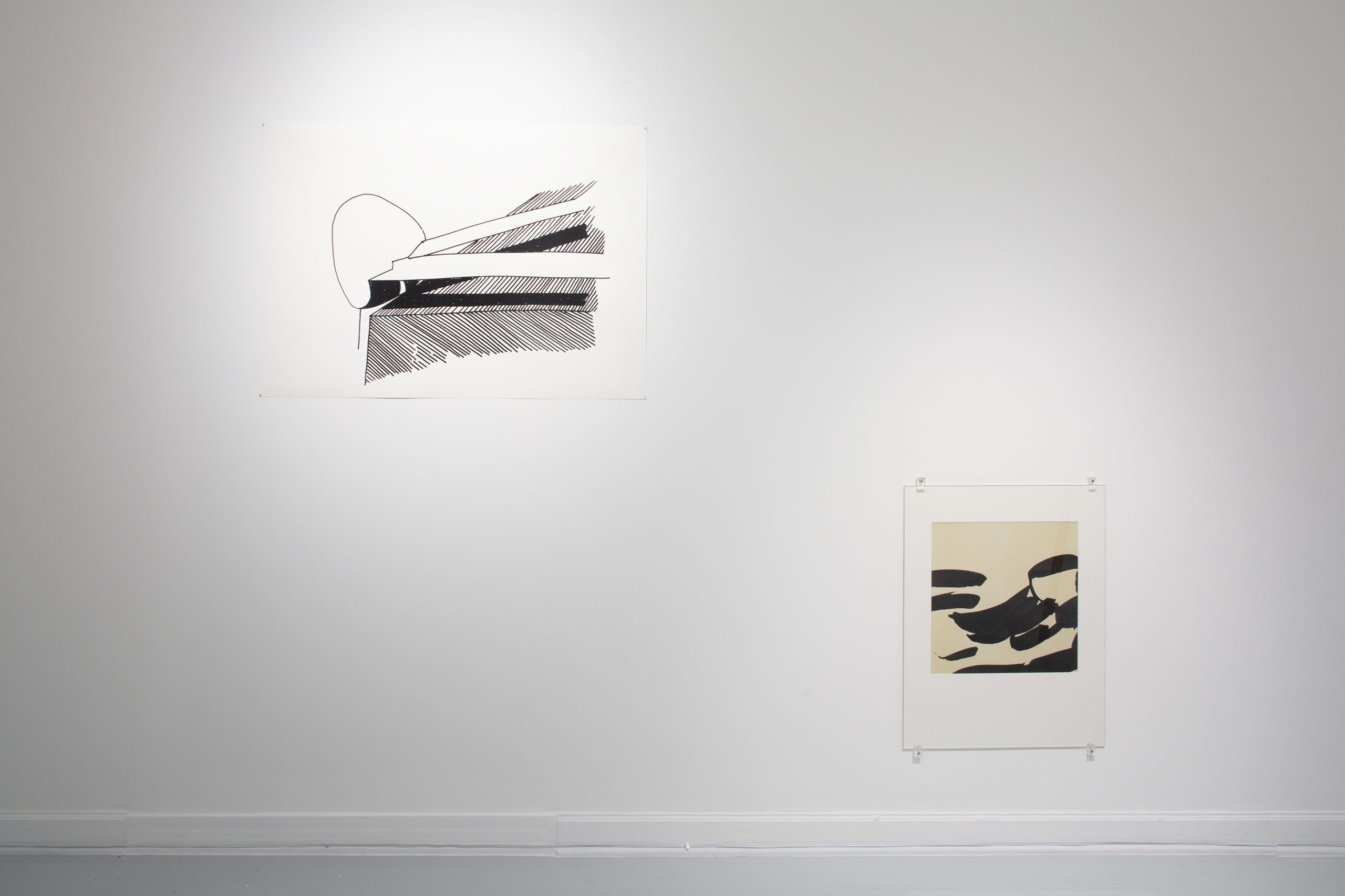 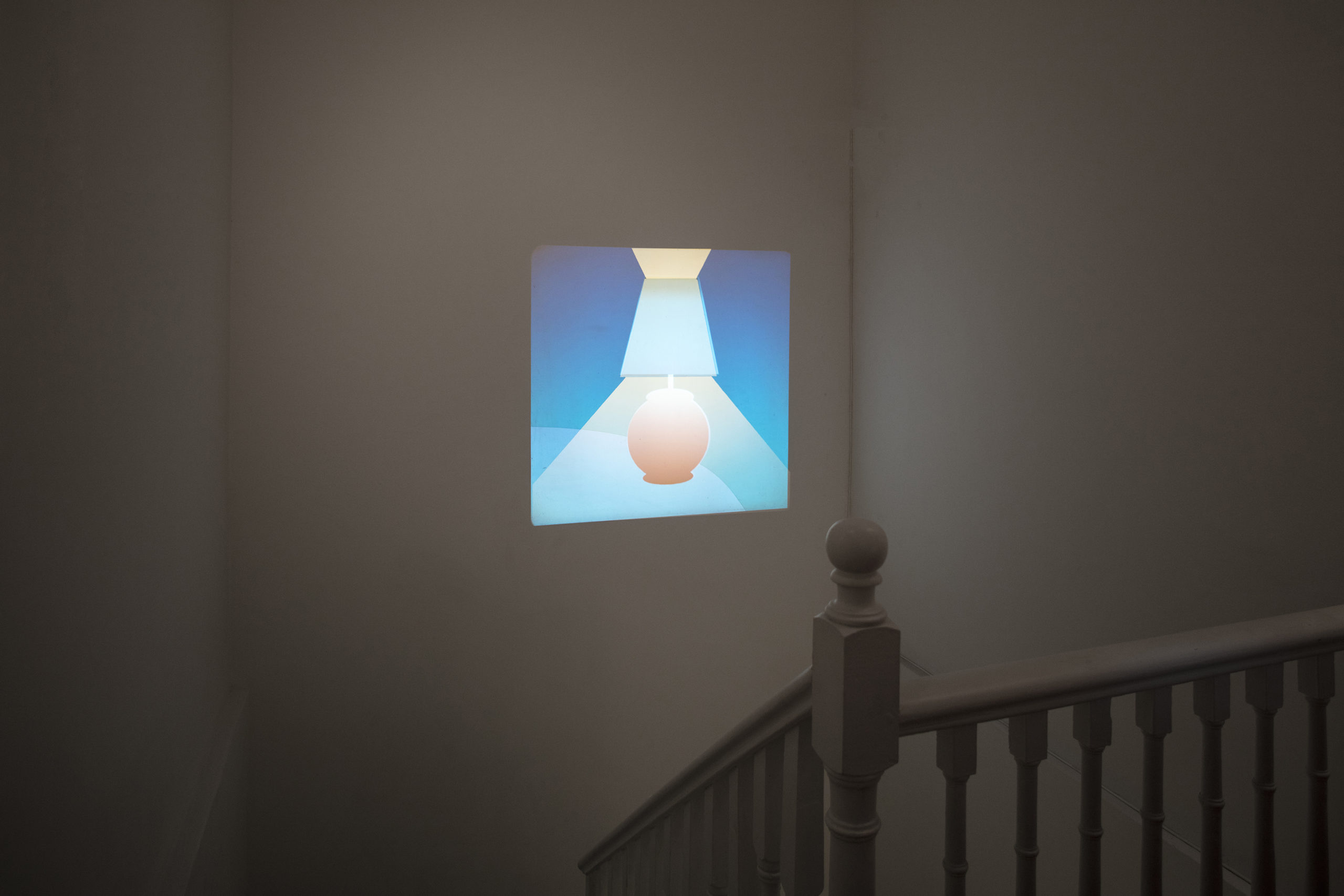 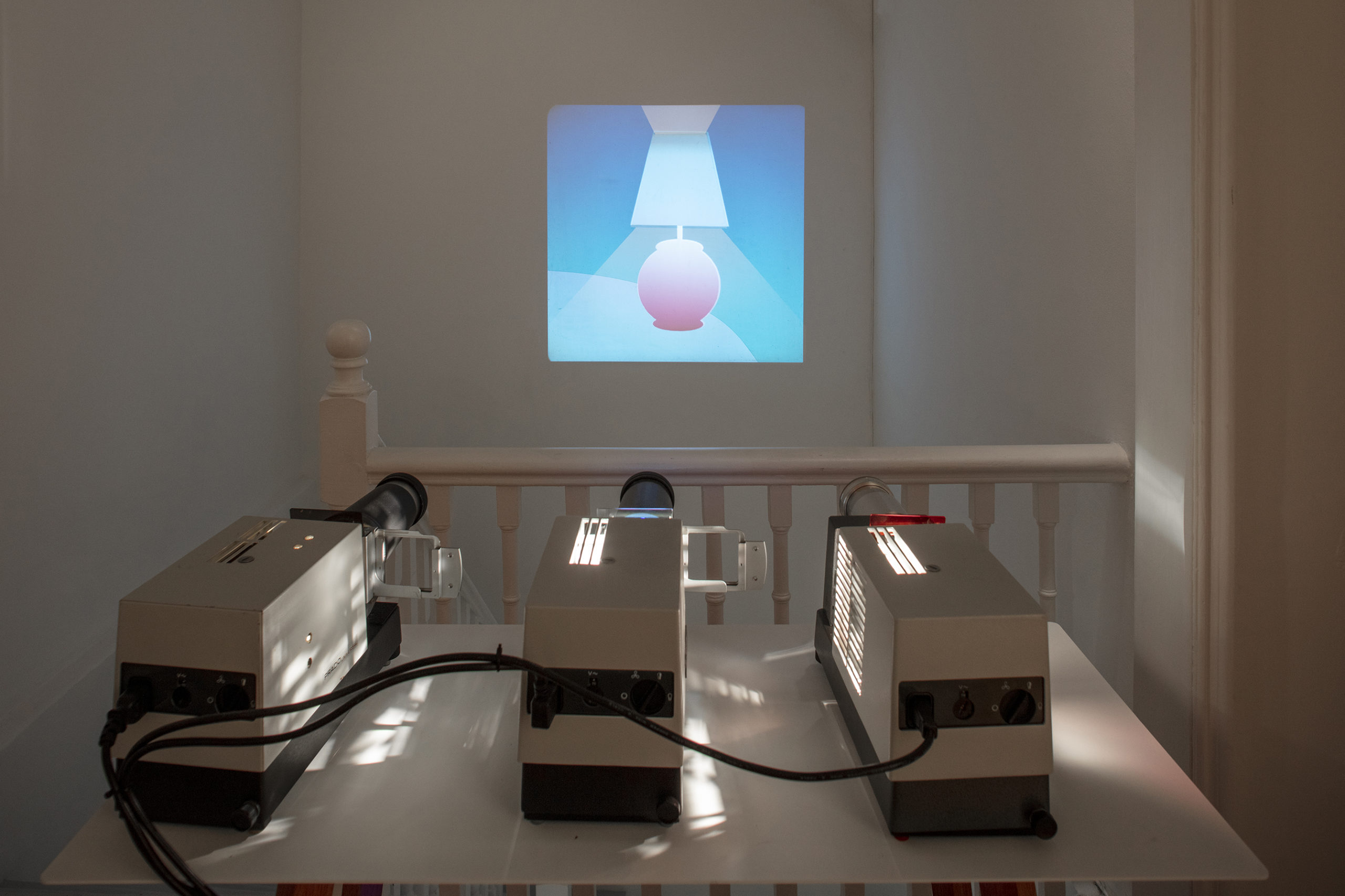 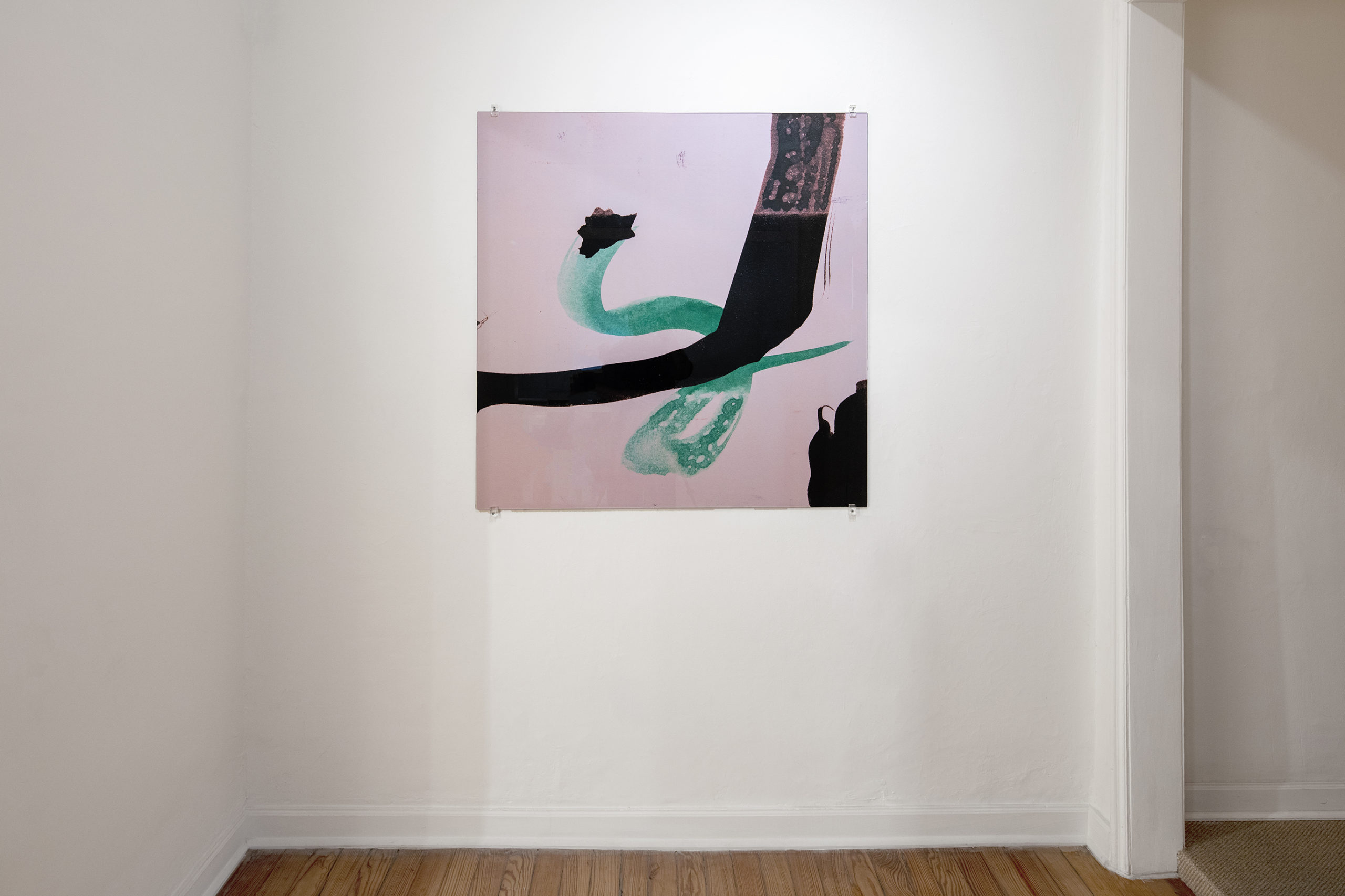 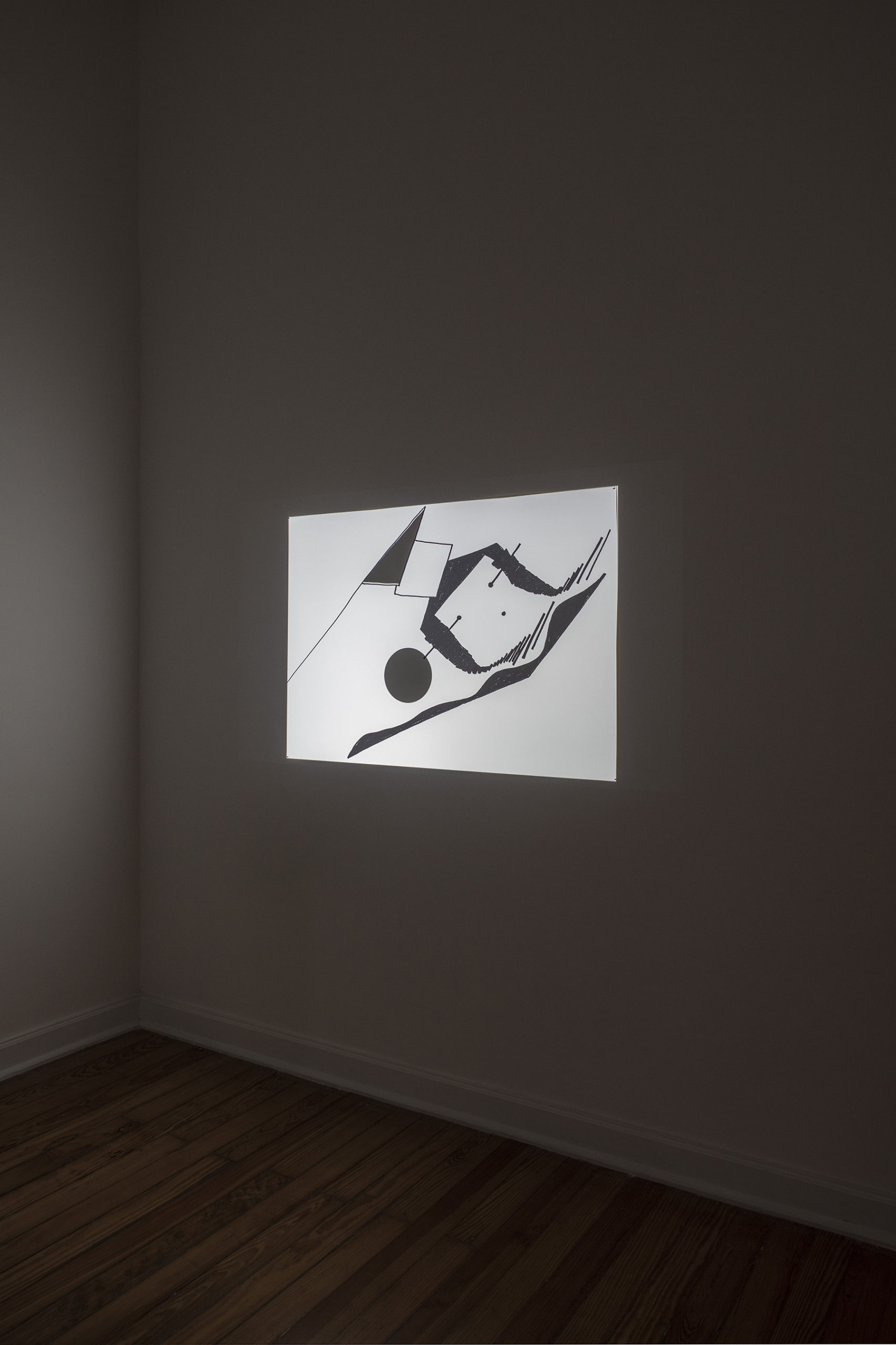 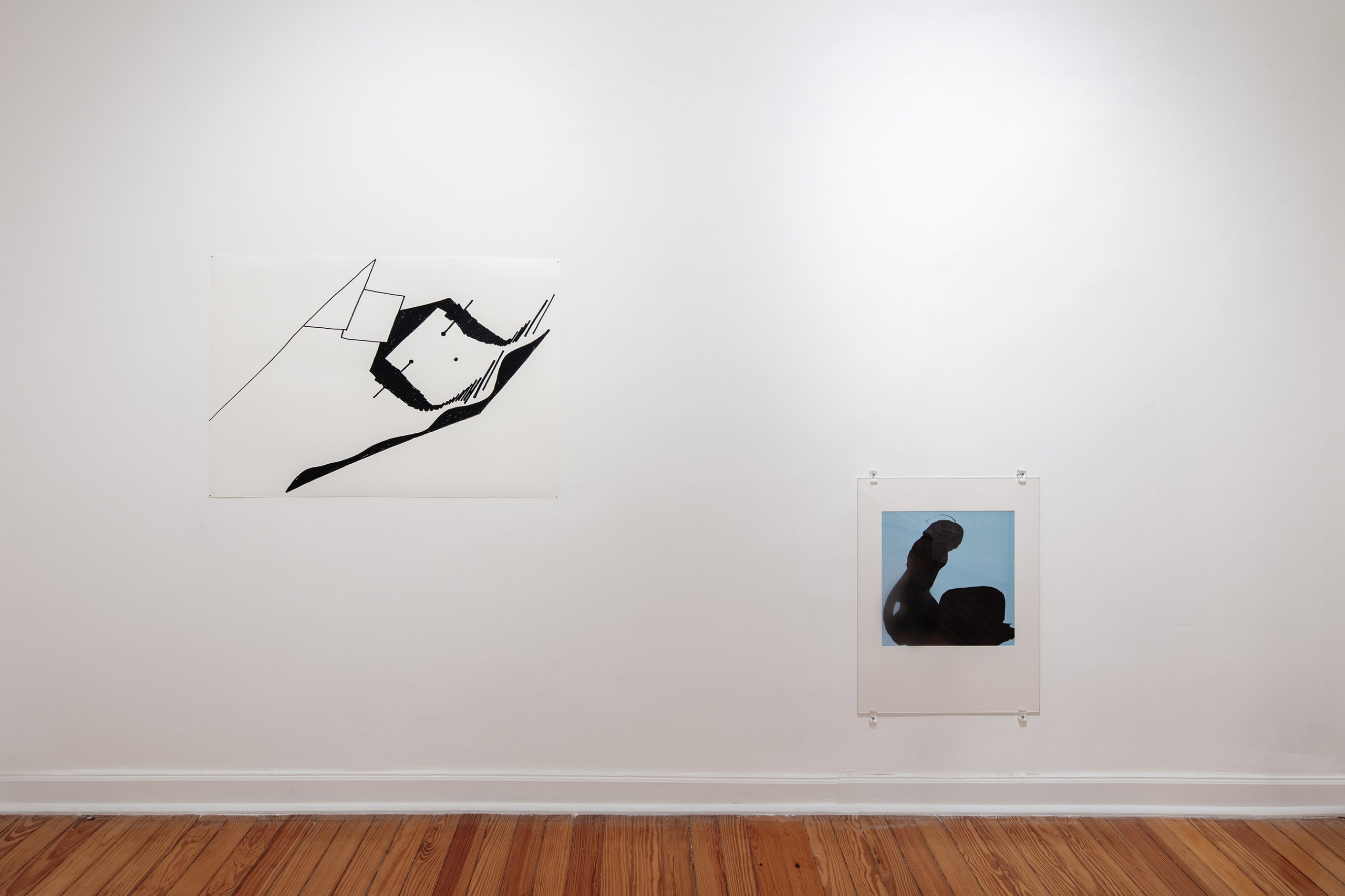 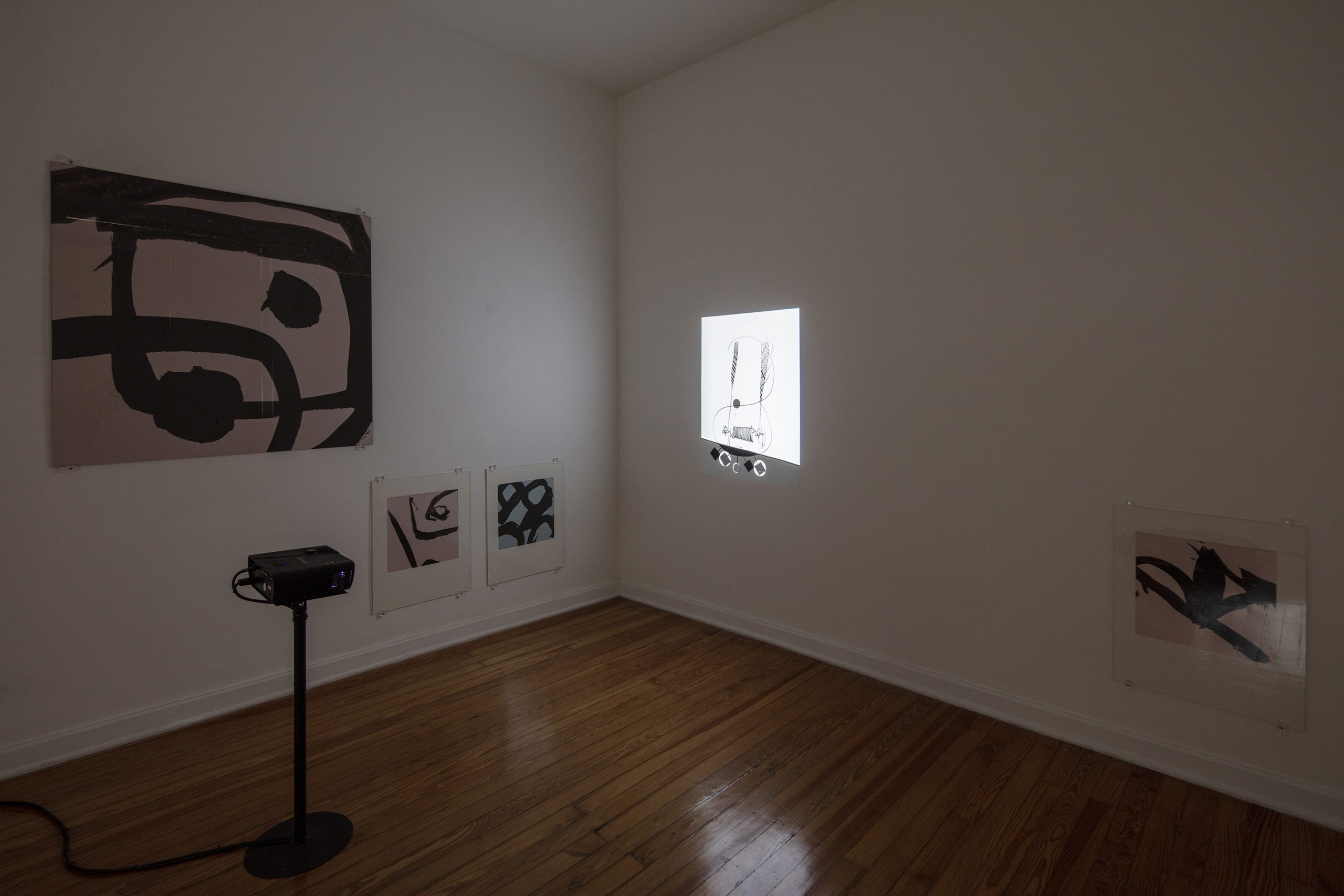 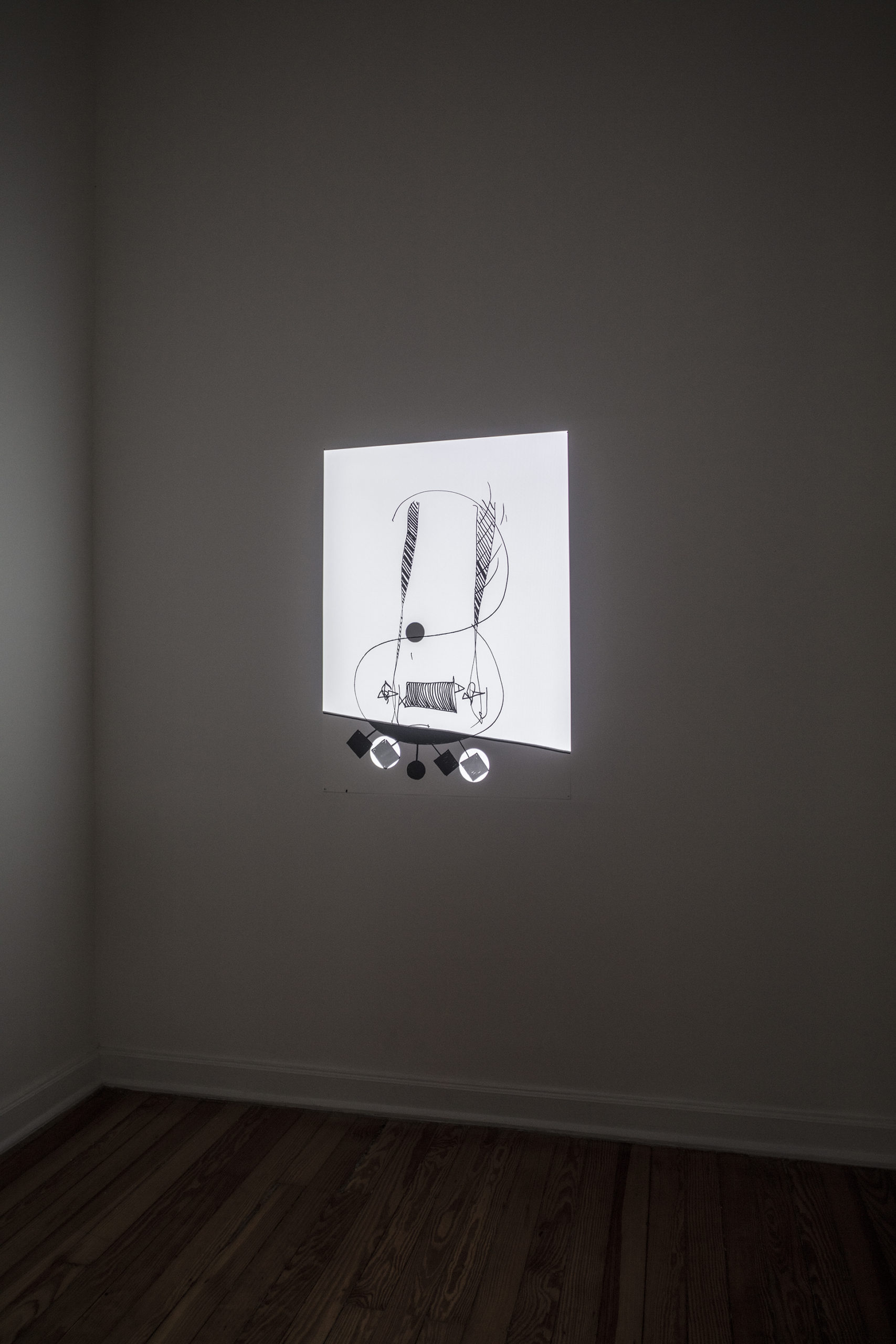 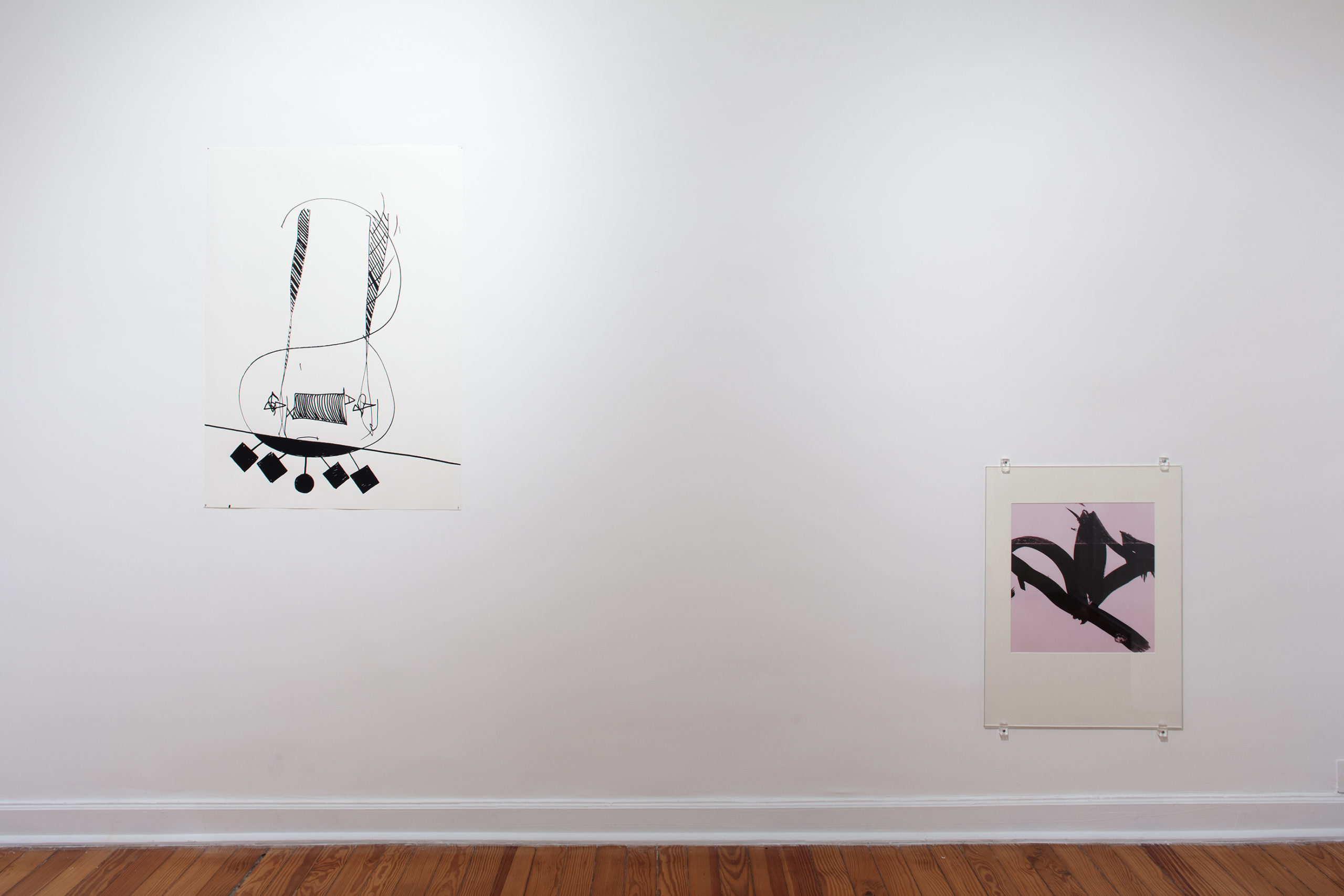 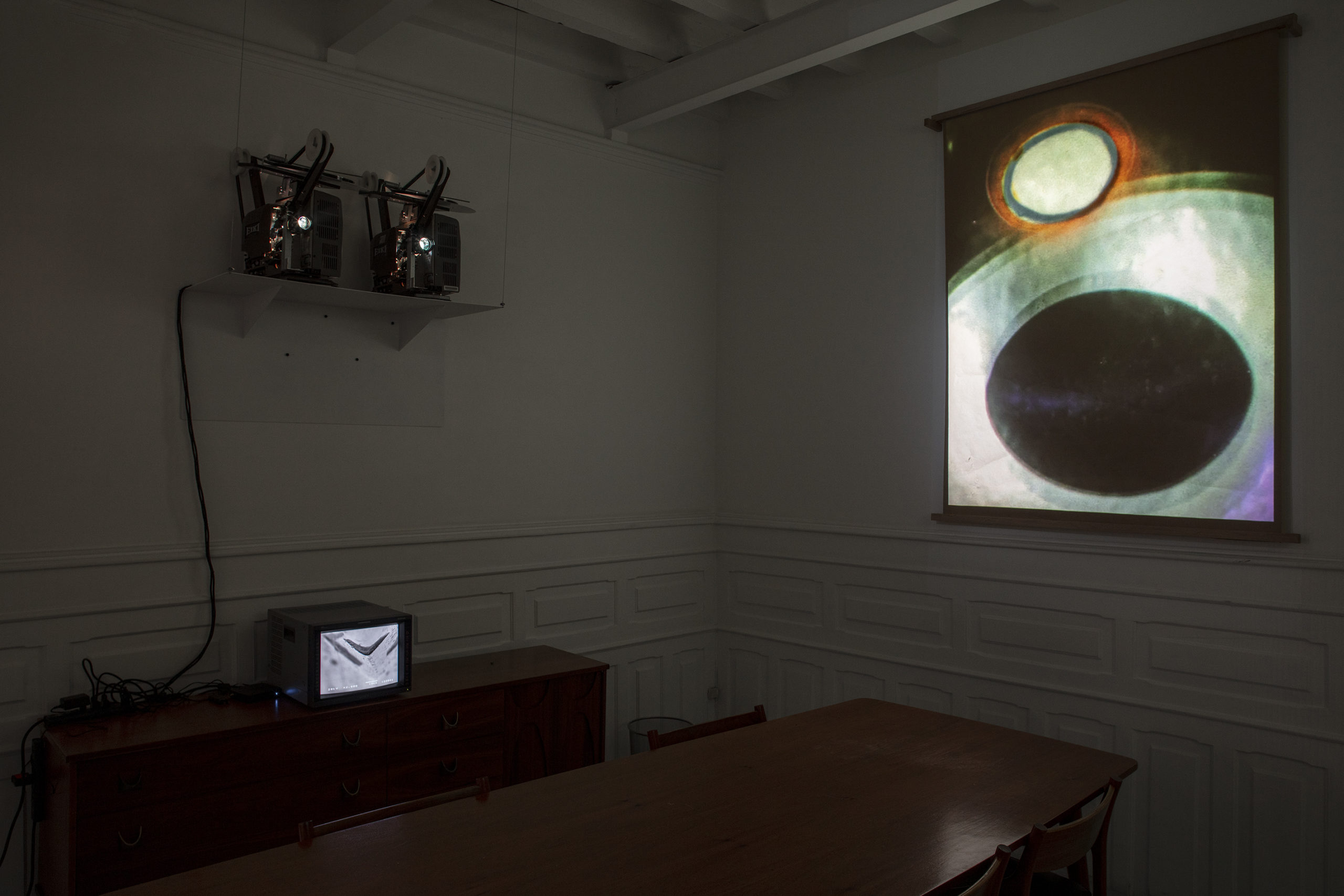 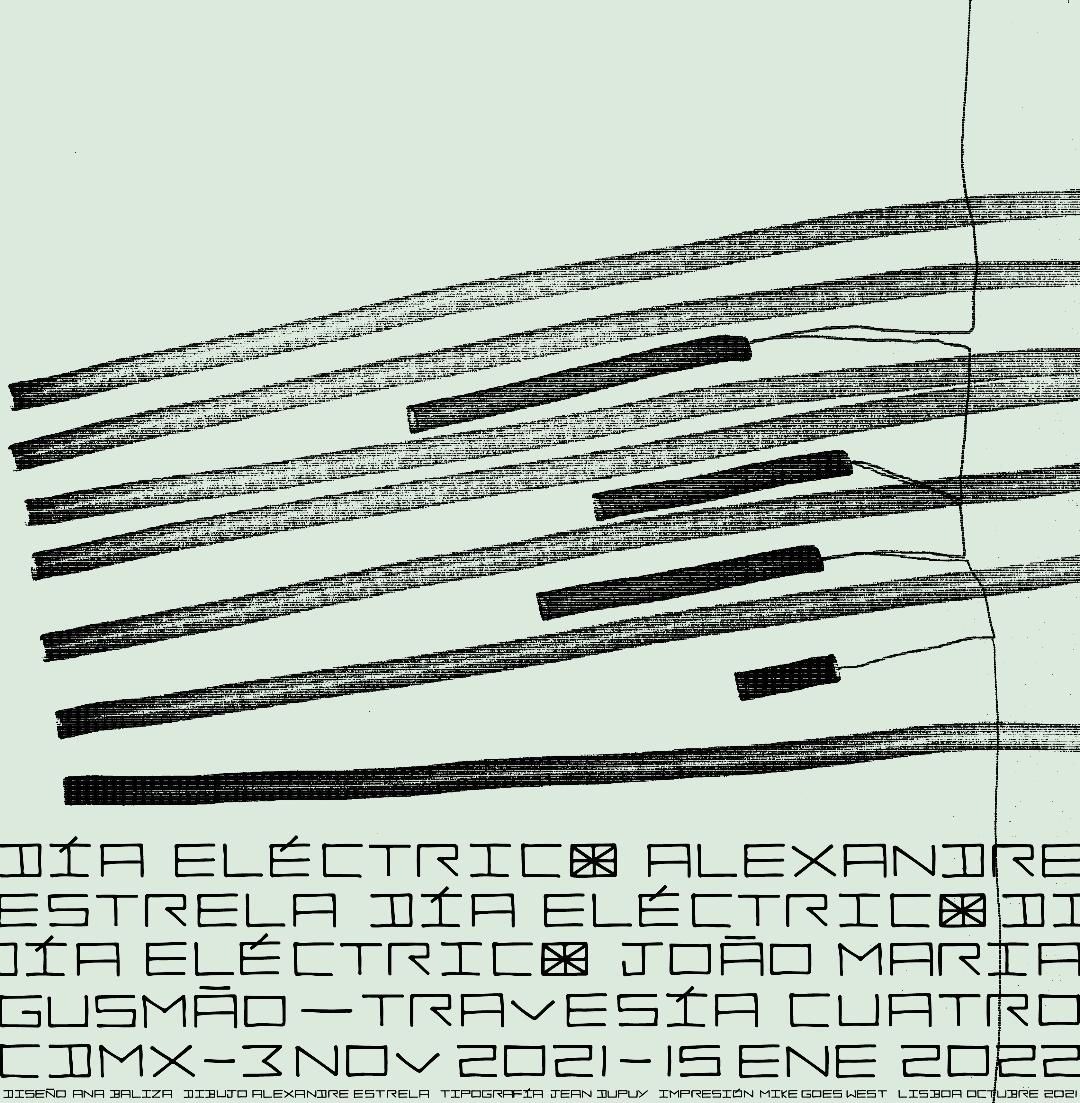 Travesía Cuatro presents Día Eléctrico, the first exhibition of Alexandre Estrela in the gallery in Mexico City. For the occasion the artist has extended an invitation to João Maria Gusmão to intertwine their universes, presenting two graphical interpretations of an electrified day. Through magic lanterns projections, video animations, calligraphic haikus, handmade geometries, involuntary graphic depictions, Día Eléctrico is a metaphor for the illusion of the cinematic image.

The project Lua Cão (2016-18), curated by Natxo Checa, was the first attempt to intersect twenty years of artistic practice by Alexandre Estrela and João Maria Gusmão, the latter still working with Pedro Paiva. Lua Cão was an experimental expanded cinema exhibition that choreographed sets of film works by JMG+PP and video installations by AE activated by a performer/projectionist. Displayed initially in the Walk & Talk festival in Ponta Delgada, Azores in 2016 it was then presented in a full format exhibition at ZDB, Lisbon, in the Kunstverein Munich and finally at La Casa Encendida in Madrid (2017-2018).

Now in Día Eléctrico, the artists propose to intersect their respective investigations into the nature of artificial light, with the aim of tracing their own conjectures about electromagnetic radiation. They will try to approach the noche americana [day for night] conundrum: how to represent night in broad daylight. Uncannily, the artists candidly thought that not one, but two exhibitions would solve it creating a bipolar animated drawing show.

Light’s ON, lights OFF.

Now you see it, now you don’t.

Now you don’t, now you see it.

Alexandre Estrela’s work is an investigation on the essence of images that expands spatially and temporally through different supports. In his videos and installations Estrela examines the subject’s psychological reactions to images in their interaction with matter. Each piece has several layers to which we are initiated step by step. The works are not just there to be watched, but rather to be unfolded. Each piece convokes synesthetic experiences, visual and sound illusions, aural and chromatic sensations that function as perceptive traps, leading the subject towards conceptual levels. With this strategy Estrela is constantly problematizing the elements that constitute the act of perceiving, splitting vision into further sensible dimensions towards the unseen and the unheard.

João Maria Gusmão, now working solo, has developed with Pedro Paiva (from 2001-2018) an enigmatic and complex array of practices and meta-practices, ranging from experimental film, sculpture, photography, to literature, curating and publishing.

Continuing the duo’s project, Gusmão’s research has been placed at the cross section between modern/postmodern experimental literature and contemporary philosophy, with a special focus towards analogue media and the aesthetics of primitive photography and filmmaking. Their cinematic and immersive installations are evocative of film as experienced firsthand by its inventors: not as a surrogate of the world but as a spectral manifestation of its withdrawal. The profound, yet metaphysical, materialism that is inferred by this approach questions our modes of existence and representation through poetics, resorting to paradox, thought experiment and absurd literary games, to provoke a consistent derisory relation with the established anthropocentric worldviews. By using alternative non-narrative film and moving image techniques, like magic lantern, documentary, slow-motion, animation and multiple exposures, Gusmão aims at a remote consciousness in the observer, both questioning its discourse (theory) and the conditions of visibility (image + duration).

João Maria Gusmão (Lisbon, 1979) lives and works in Lisbon. He formed an artistic duo with artist Pedro Paiva between 2001 and 2018. Past solo projects include a major overview of Eugene Frey’s use of magic lantern at Nouveau Musée National de Monaco in 2019 and several curatorial projects. Highlights of JMG+PP collaboration include Terçolho [Stye], Museu Serralves, Porto, 2021; Lua Cão (with Alexandre Estrela), a project curated by Natxo Checa initiated in 2017 by Galeria Zé Dos Bois in Lisbon, that traveled to the Kunstverein München, and concluded at La Casa Encendida in Madrid in January 2019; João Maria Gusmão and Pedro Paiva: Peacock, Haus der Kunst, Munich, 2017, The Sleeping Eskimo, Aargauer Kunsthaus, Aarau, Switzerland, 2016, The Missing Hippopotamus, Kkv Kolnischer Kunstverein, Cologne, 2015, Papagaio, HangarBicocca, Milan, 2014; travelled to Camden Arts Centre, London, 2015, and KW Institute for Contemporary Art, Berlin, 2015, One month without filming, REDCAT, Los Angeles, 2015, Since you have eaten the horse, you can travel to Rome by donkey: on dwarf philosophy, Kunsternernes Hus, Oslo, 2012 and Passengers 1.7, CCA Wattis Institute for Contemporary Arts, San Francisco, 2008. In 2009, Gusmão and Paiva represented Portugal at the 53rd Venice Biennale. Additionally, their work was included in The Encyclopedic Palace, curated by Massimiliano Gioni, the International Art Exhibition at the 55th Venice Biennale, 2013, the 8th Gwangju Biennale, 2010, Manifesta 7, 2008, the 6th Mercosul Biennial, Porto Alegre, 2007, and the 27th Bienal de Sao Paulo, 2006.