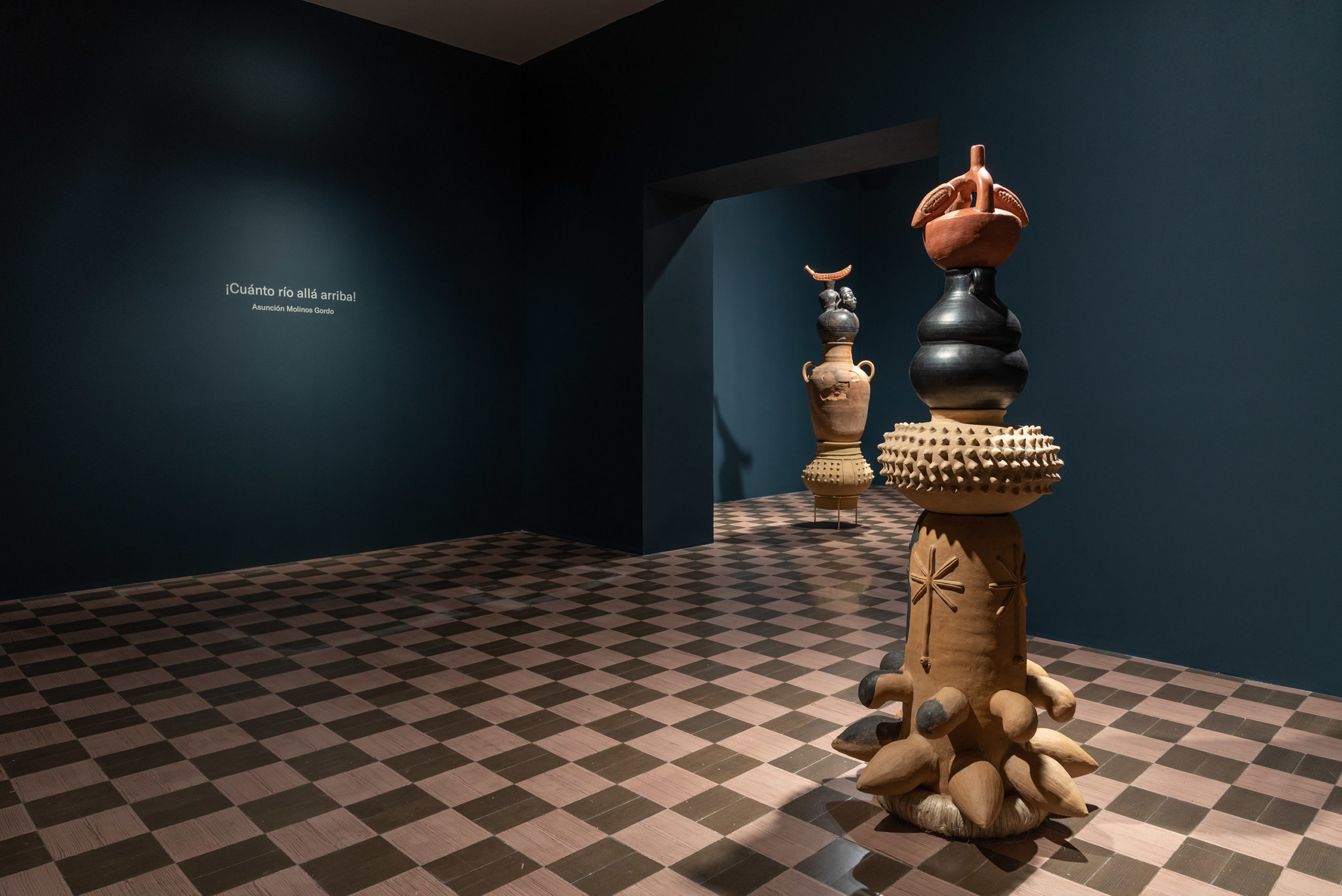 Nothing so low, vile and despicable as mud…

…and yet for centuries it was a decisive element in the life of human communities all over the planet: earth to work for cultivation, the base material of traditional popular architecture and of the infinite number of ceramic handicraft objects for daily, recreational and ritual use. The gestures contained in the elemental culture of clay refer to peasant ways of life that in all regions have been liquidated by the inertia of modernity, despised and excluded from history because of their minor, artisan and popular character. The modern world could not be realized without erasing a set of practices and knowledge of communal character, that is to say, guardians of the generous secret of prospering as a collective, because they contradicted the -absurd- logic of competitiveness and exploitation without limits. “Progress” could not happen without dispossessing the rural world of ways of life that are increasingly urgent to recognize -that is, to get to know again- but also to honor and celebrate, as Asunción Molinos Gordo proposes with her project ¡Cuánto río allá arriba! produced within the framework of the 15th Biennial of Cuenca, Ecuador, curated by Blanca de la Torre- and which takes its title from a verse of the poem El cántaro roto (The Broken Pitcher) by Mexico’s Octavio Paz. The title of this exhibition, then, meets the land of the poet who imagined it and also meets a long ceramic tradition with the power to befriend and resonate with the keys of this exhibition.

The peasant communities of all times and all territories know well that to understand the mysteries of regeneration and fertility, the fields must receive water in the form of rain or irrigation; to shape the clay, it must be moistened and then fired to gain solidity; And for any form of life to thrive, clean water is needed, accessible to all, not as projected by the so-called “futures markets” of Wall Street, which speculate on water since the end of 2020, and in truth make these futures impossible for the vast majority of living beings on the planet.

Asunción -who lived eight years between Egypt and Oman- has worked on this interdependence between living beings, land and water in Como solíamos… (IVAM, Valencia, 2020), a project revolving around the irrigation systems of the medieval Hispano-Muslim peasant communities of Sharq al-Andalus (East of the Iberian Peninsula) that was the starting point of ¡Cuánto río allá arriba! Prior to any state or national narrative, peasant communities practiced a water culture whose storage, transport and consumption ensured equitable and efficient access and distribution, thus reinforcing peace and social justice, for the benefit of the entire living ecosystem they inhabited, concerned with the well-being – this time for real – of future generations. The Andalusian rural society thus deploys, through pottery, a way of life that, far from being a differential fact, is shared with other pre-modern rural communities of similar historical periods, also with the pre-Hispanic ones, which were related to water, land and clay arts in a comparable way.

Round pots, large ovoid amphorae, pot-bellied pitchers, cone-shaped vessels, whistle bottles, multi-mouth vessels, watering cans, biomorphic bowls… the unquestionable beauty and sensuality of these pieces, the abundance denoted by their generous hollows made with muds of different colors, does not hide their radical utility for transporting, conserving, distributing or consuming the goods that the earth itself provides us without exhausting it. The Ecuadorian ceramic pieces, which have been reproduced by different local artisans, come from the Valdivia, Machalilla, Chorrera, Tolita, Jama Coaque, Bahía, Guangala, Milagro-Quevedo or Manteño-Huancavilca cultures. The failed pieces are reproductions of the Spanish colonial period, generating a significant dialectic with the pre-Hispanic. Their plant, animal and anthropomorphic forms reactivate symbologies linked to a relationship with nature that is clearly more responsible and aware about the fact that inter-species coexistence – hospitality and not hostility – is the key to living systems. The reproduction of these motifs suggests an ancestral mimesis that reproduces, not a mere copy of nature’s image, but its own generative force. Are not these biomorphic ceramics as pregnant with vitality as is the very land that communities in disparate places have irrigated for centuries with the same intelligence and care? By assembling them in the form of a totem, thus connecting the ascending and descending vital forces of the world – the corn-god, the flower-god, the water-god, the blood-god, as Octavio Paz says in his poem – the artist has sought, on the one hand, to highlight and maximize the common qualities around the accessibility of water that they share. On the other hand, to celebrate and pay homage to the generosity and intelligence of the people when it comes to protecting life in common.

Now going back to Paz’s poem: we must dream the dreams of a river see- king its course, dreams of the sun dreaming its worlds… we must dream backwards, towards the source, we must row centuries upwards, beyond childhood, beyond the beginning, beyond the waters of baptism, tear down the walls between man and man, put together again what was separated.

Although folklore is often resorted to in order to promote, claim or extol some kind of identity or spiritual essence (whose synthesis is often forced and excluding) these pieces show common material characteristics of craft traditions from other regions of the world, from primitive times but still present in many peasant cultures, suggesting the same concerns, the same responsibility and care. So, by virtue of the relationships they establish with the environment, it is appropriate to say that these cultures of Abya Yala, Al-Andalus or the Mediterranean behave as a fermenting mother mass of commonality in which transnational and transregional conversations and exchanges have been mixed, unfolding threads of continuity, sympathies, similarities, twinning.

The histories of oppression of peasants are also often shared: Systematized destruction of ways of life and territories, diasporic communities, erased from history… Perhaps then one could say in this transcultural sense, as some banners of the peasant struggle cry out, that solidarity is the tenderness of the peoples and that is why there is no people who would not stain their hands with that low, dastardly and despicable material such as mud, to leave in the world the mark of a gesture of generosity and abundance and equality to which these pitchers bear witness.