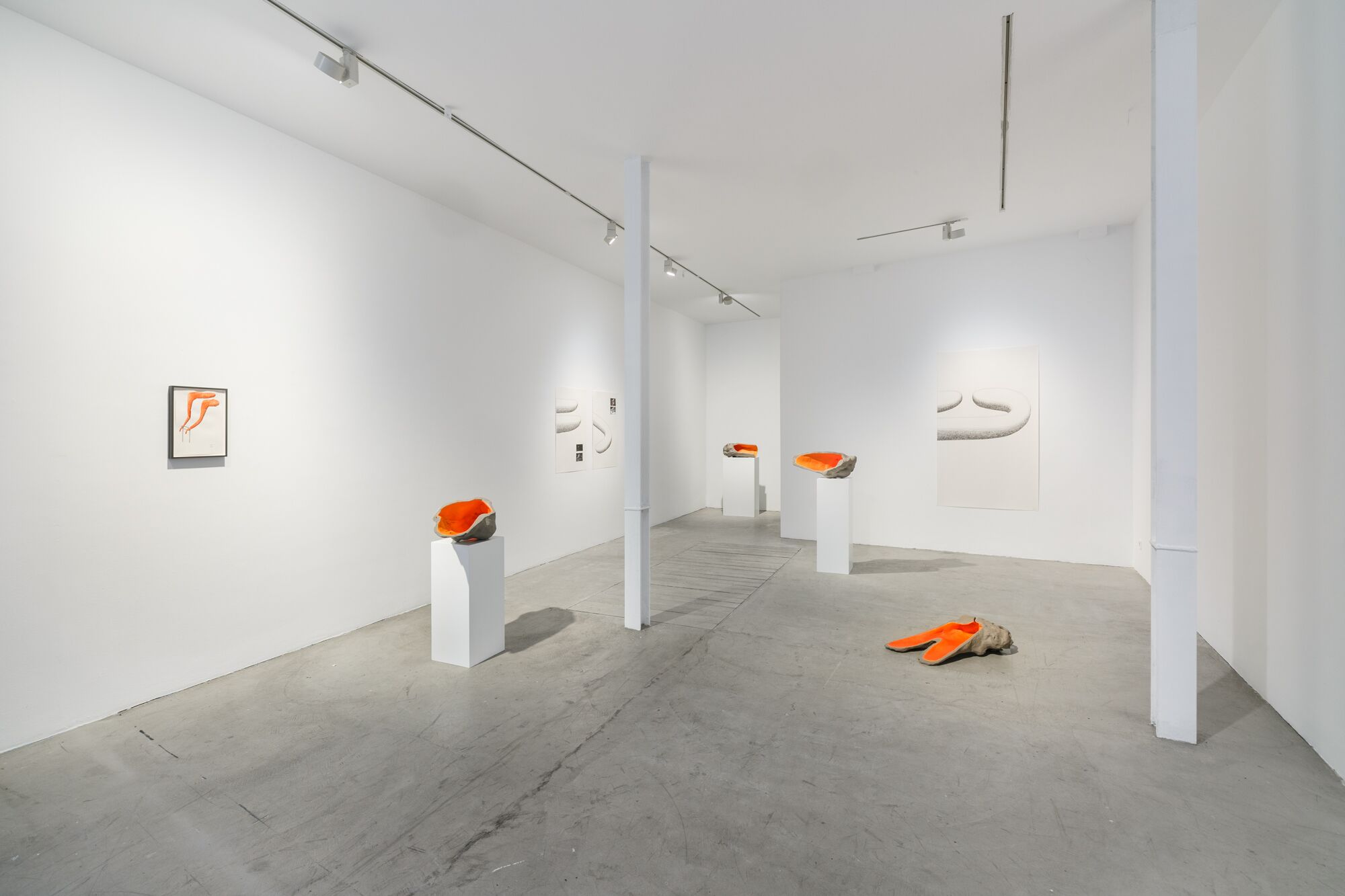 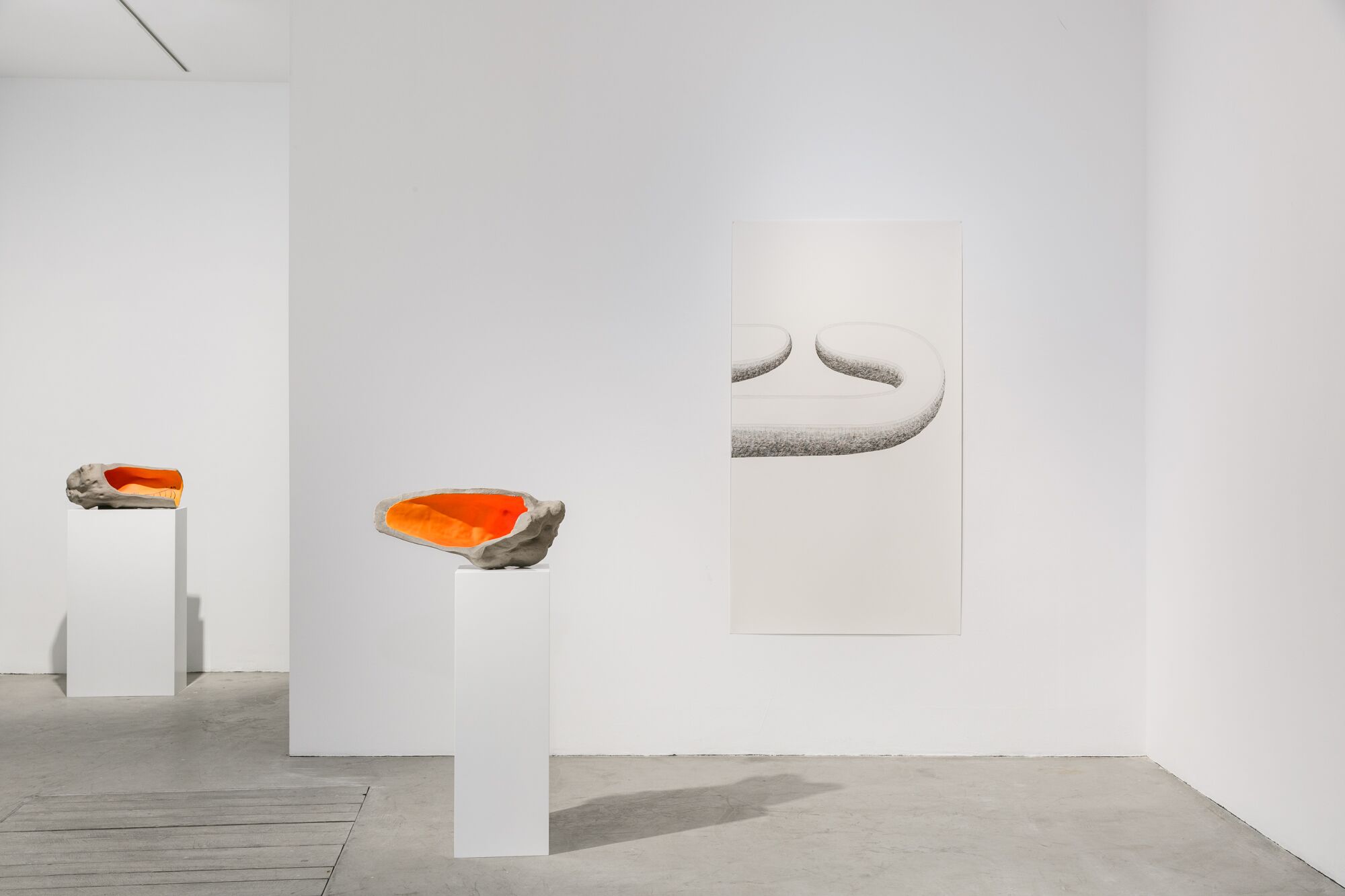 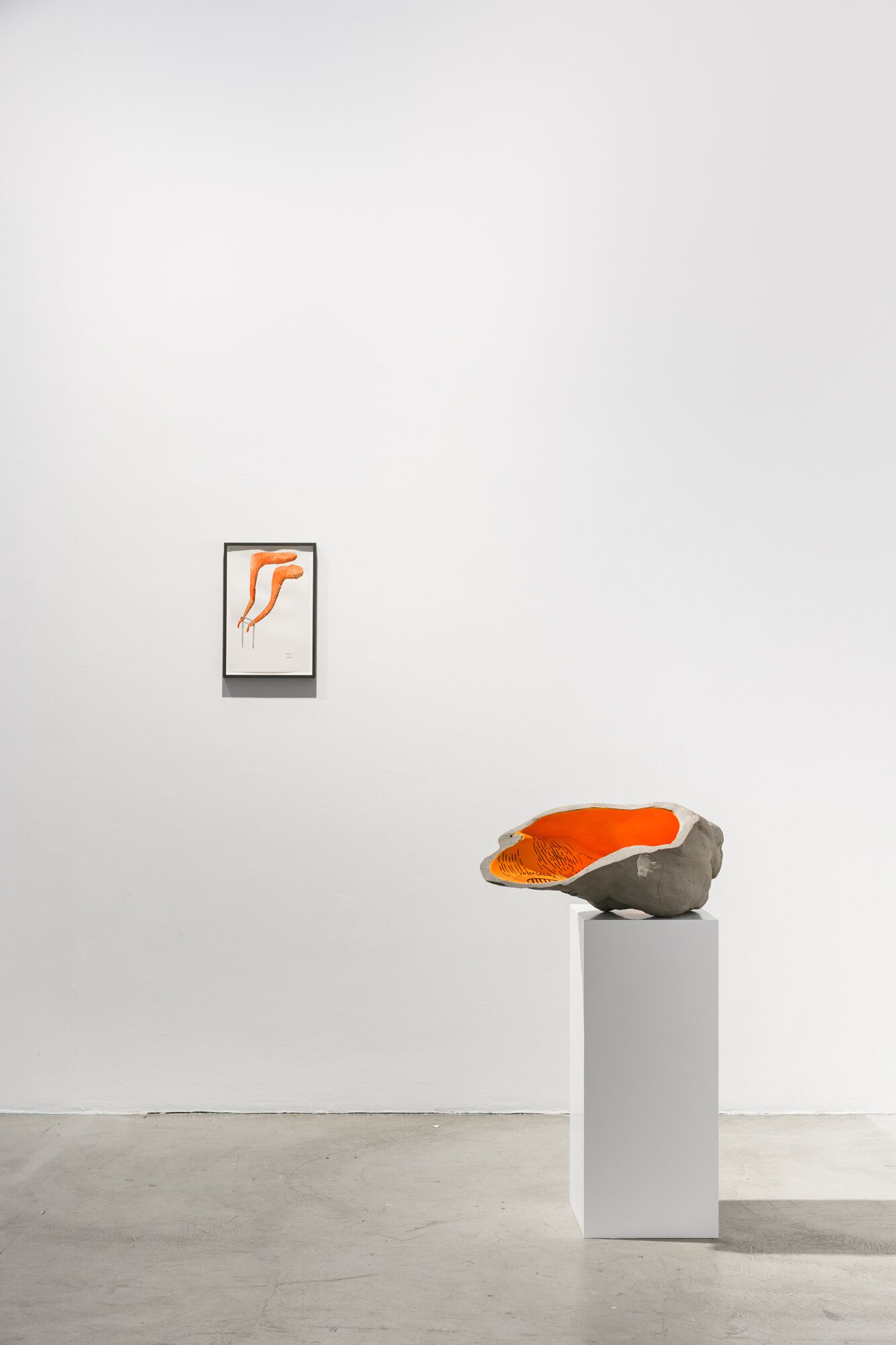 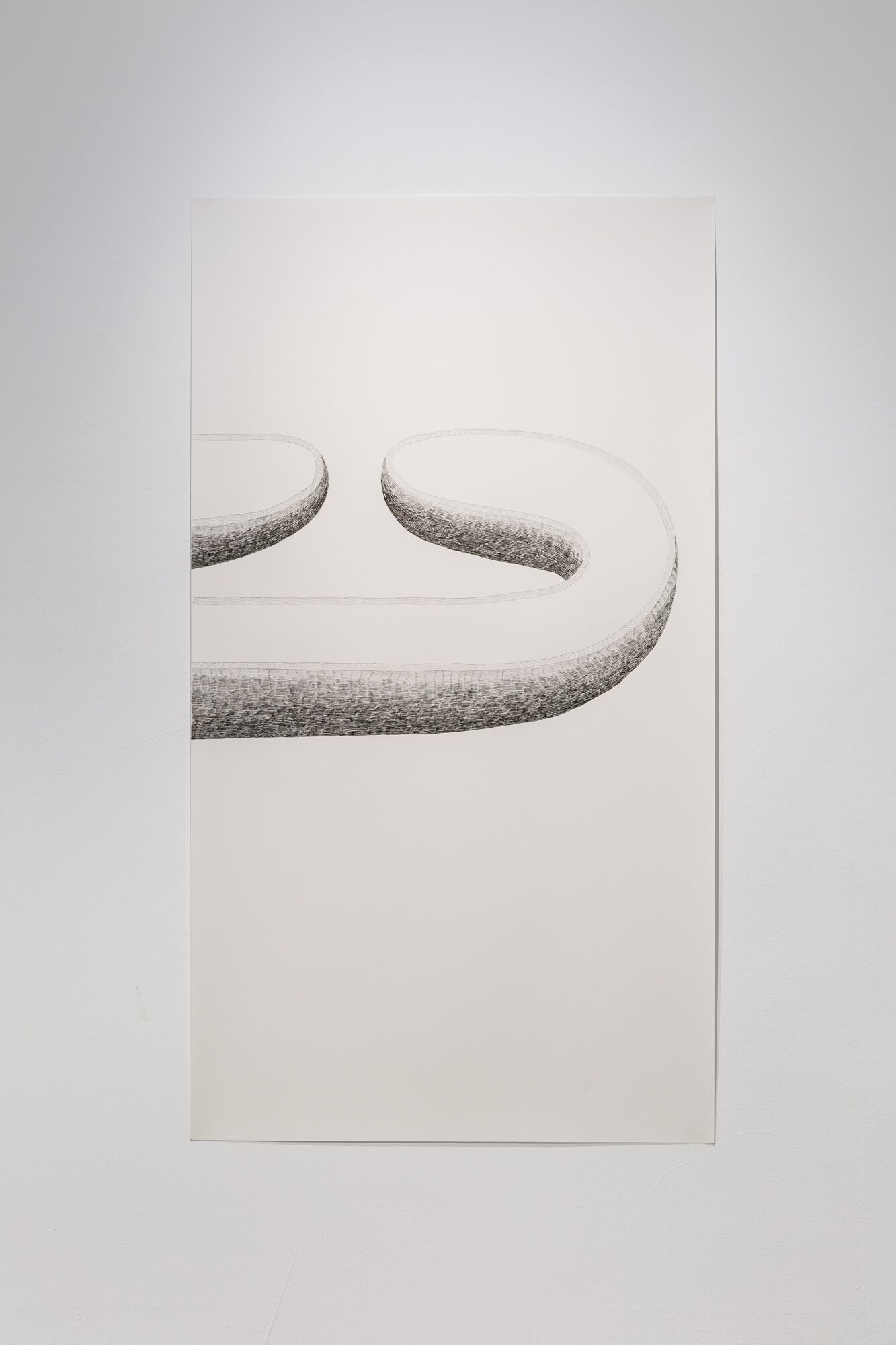 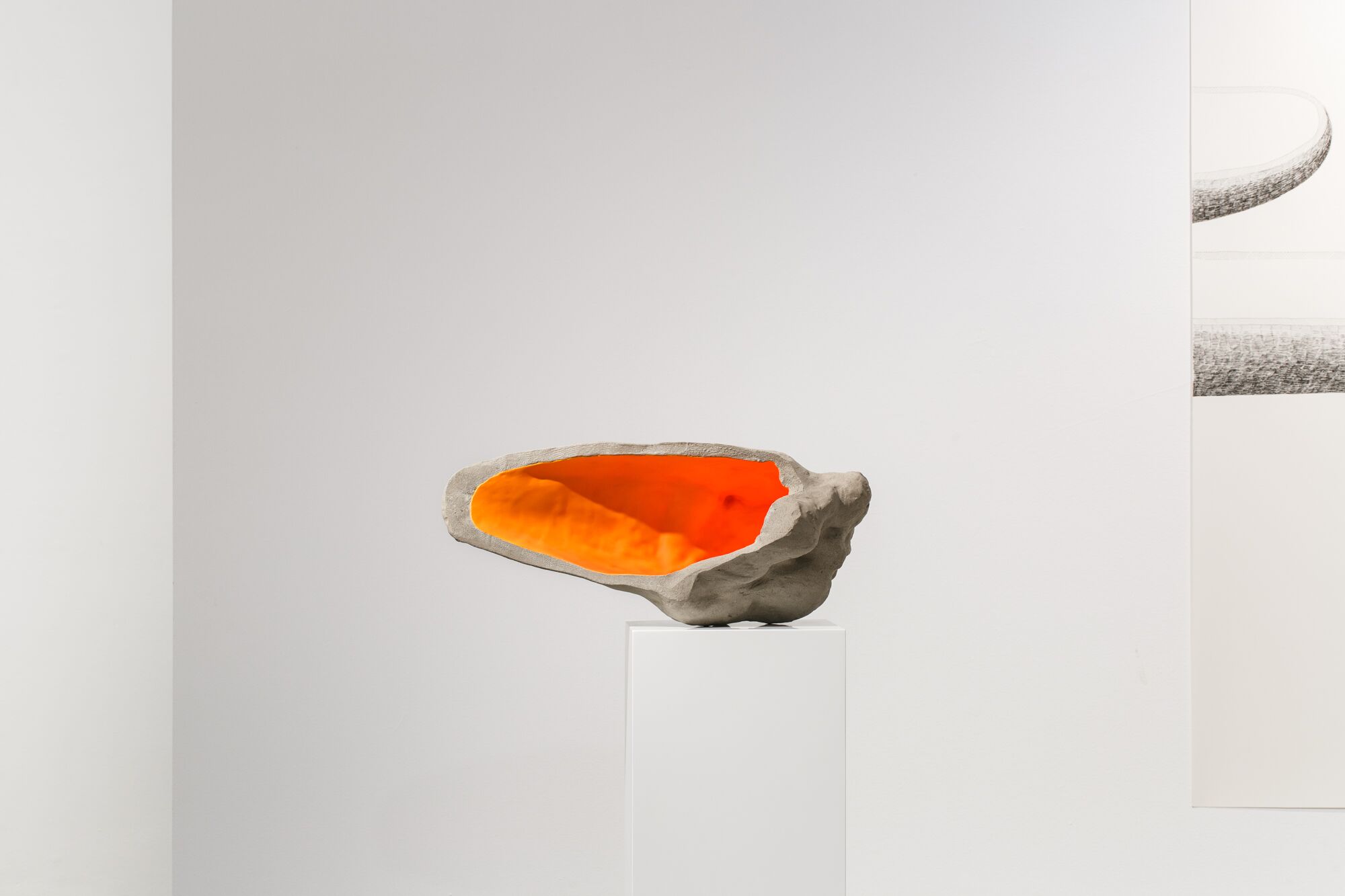 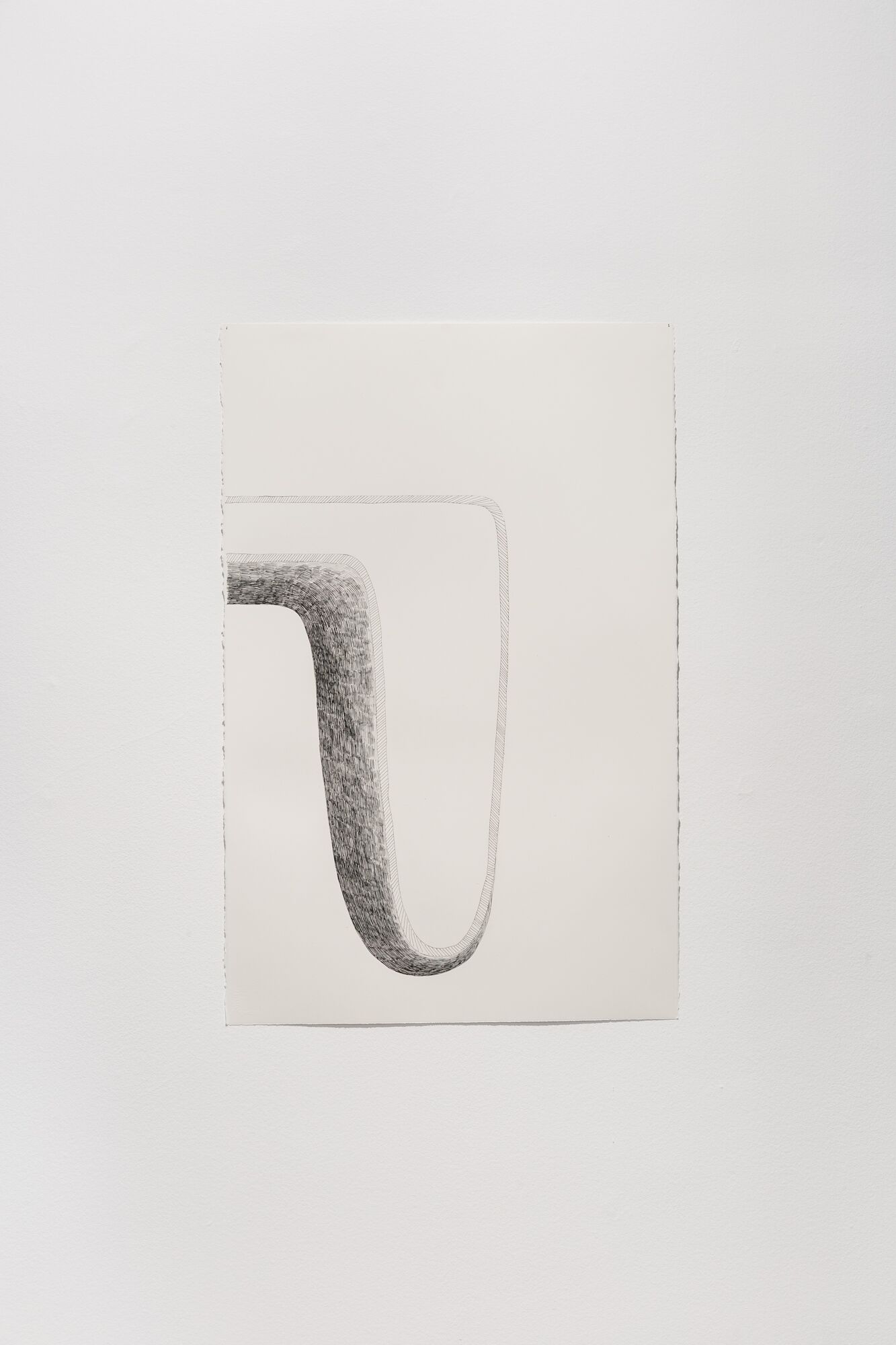 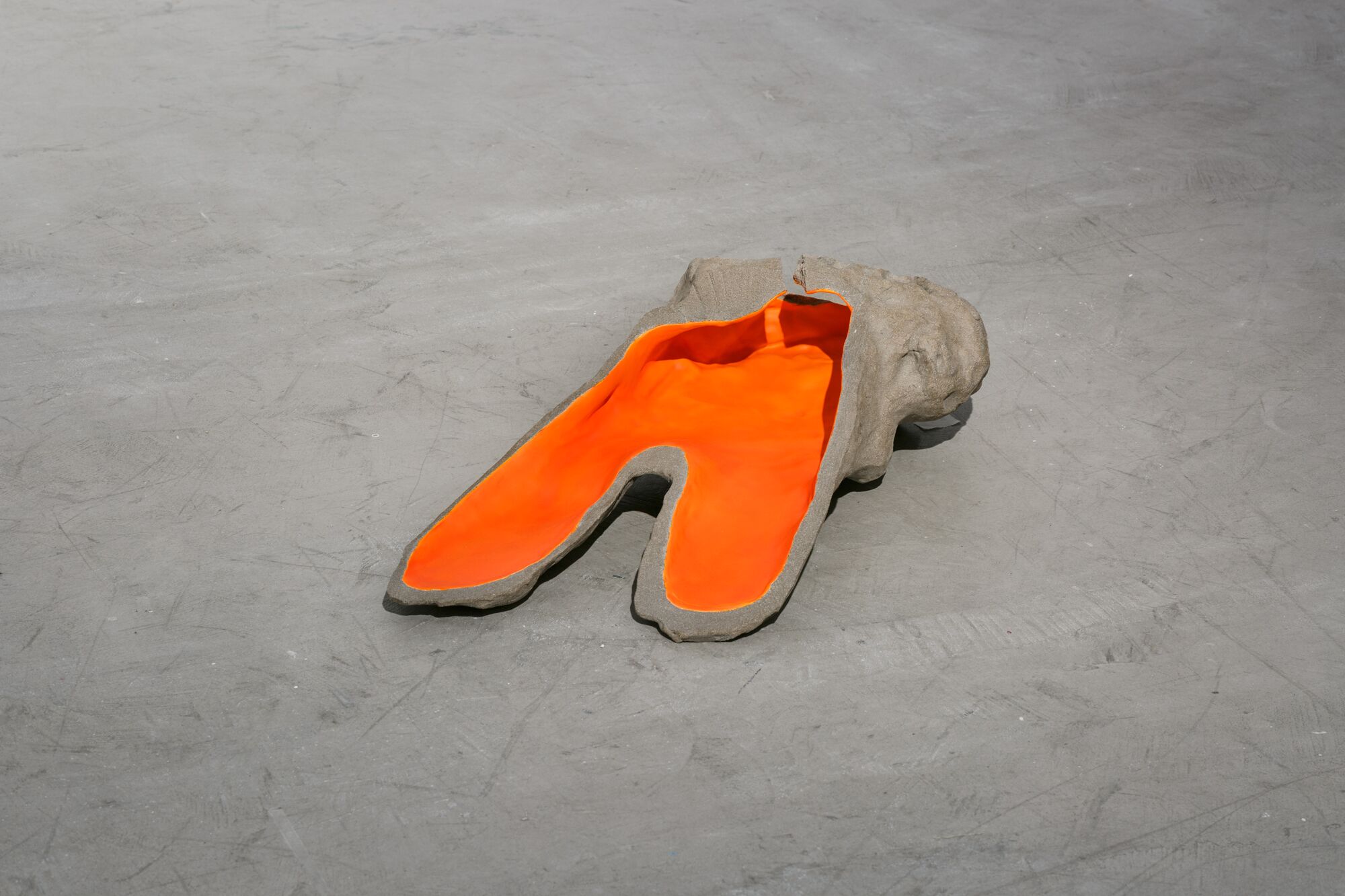 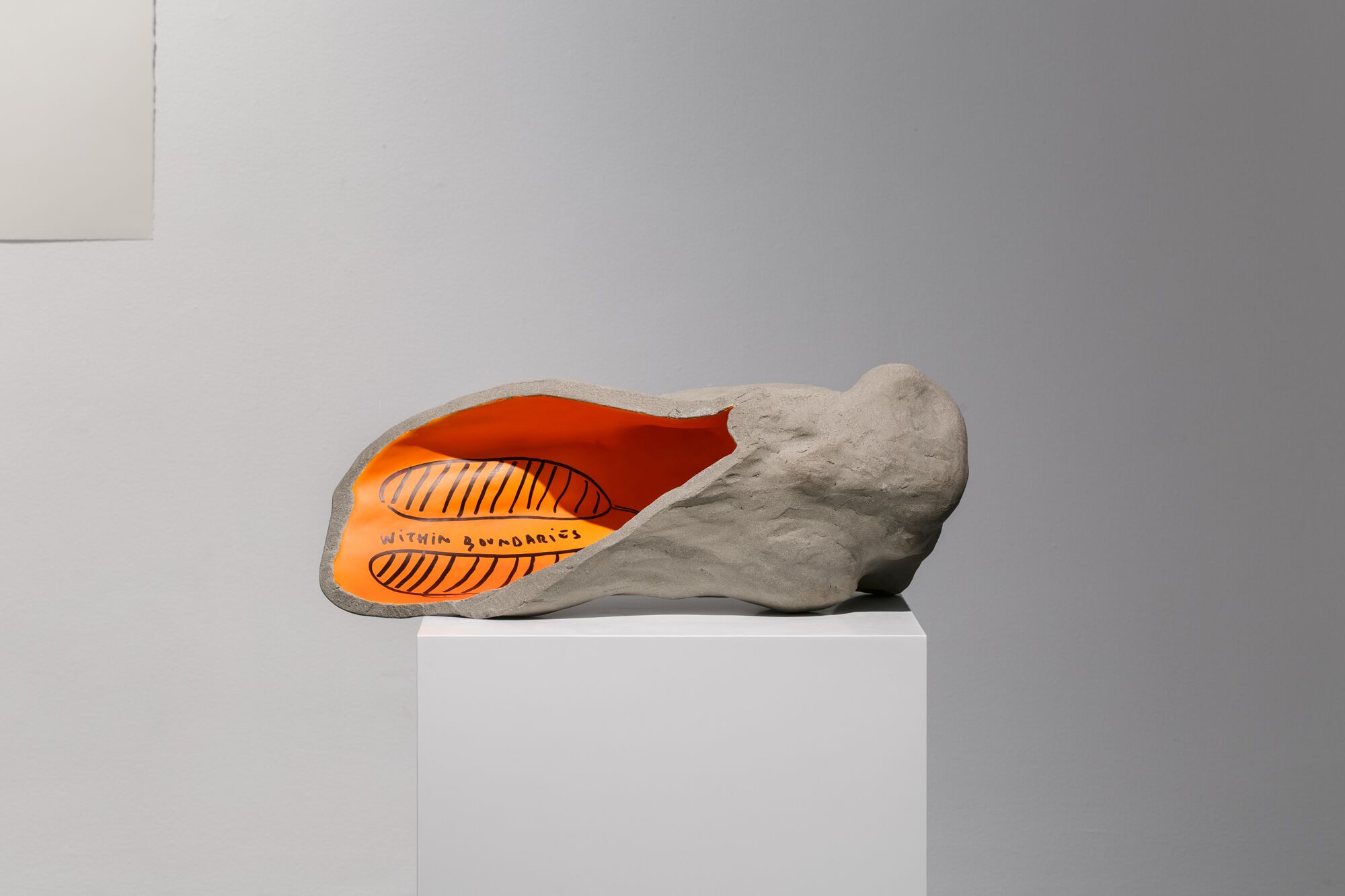 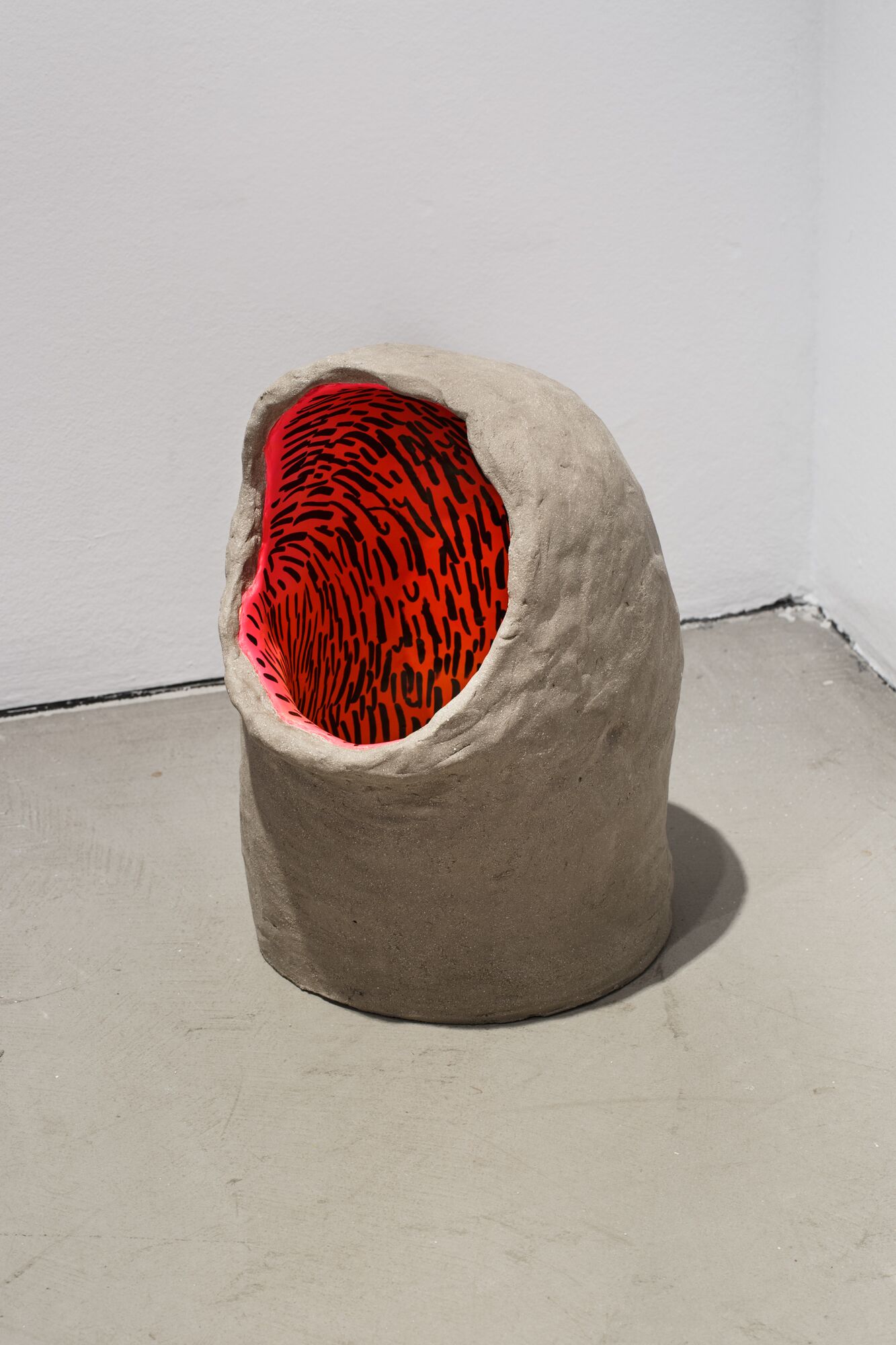 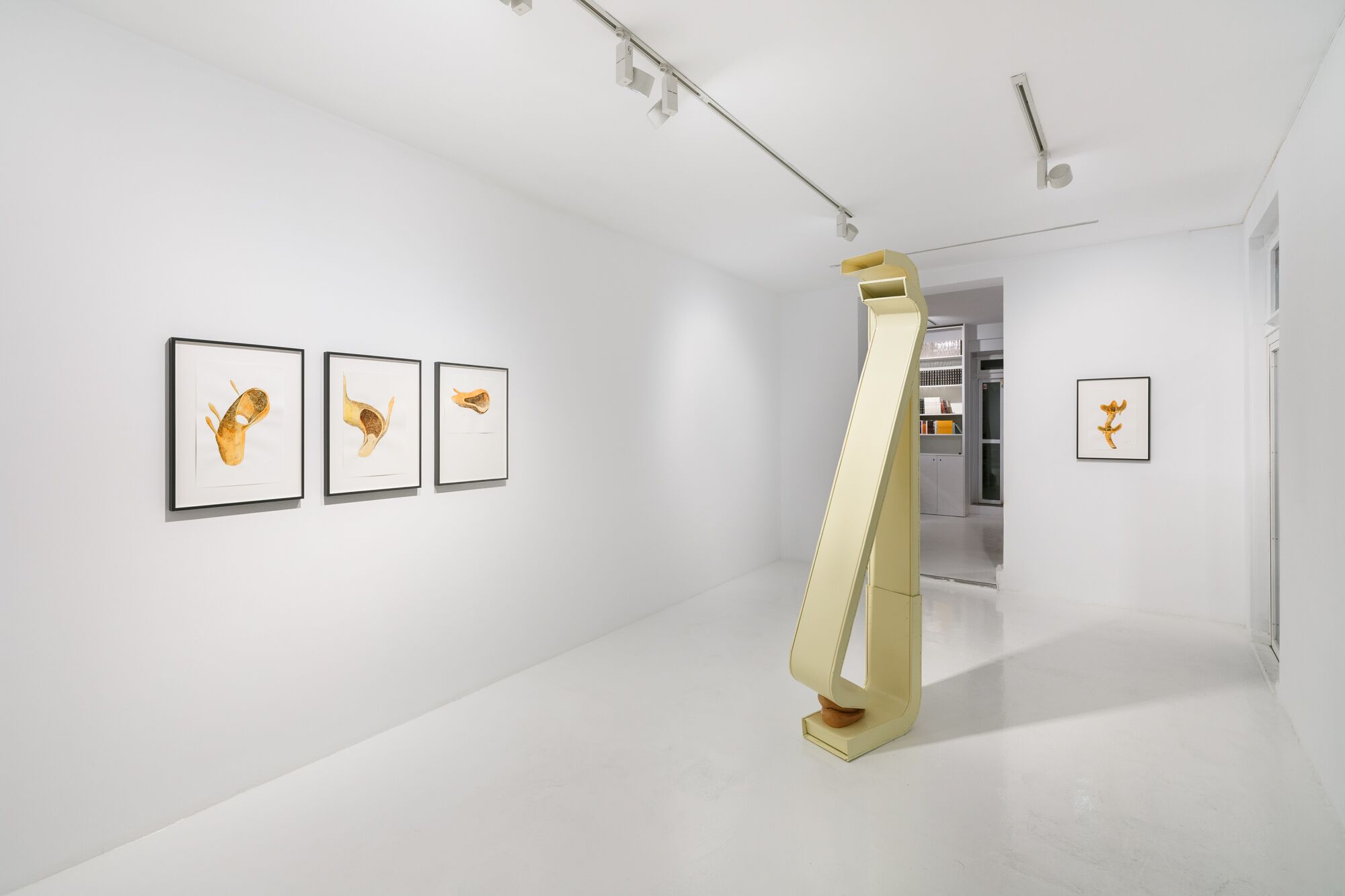 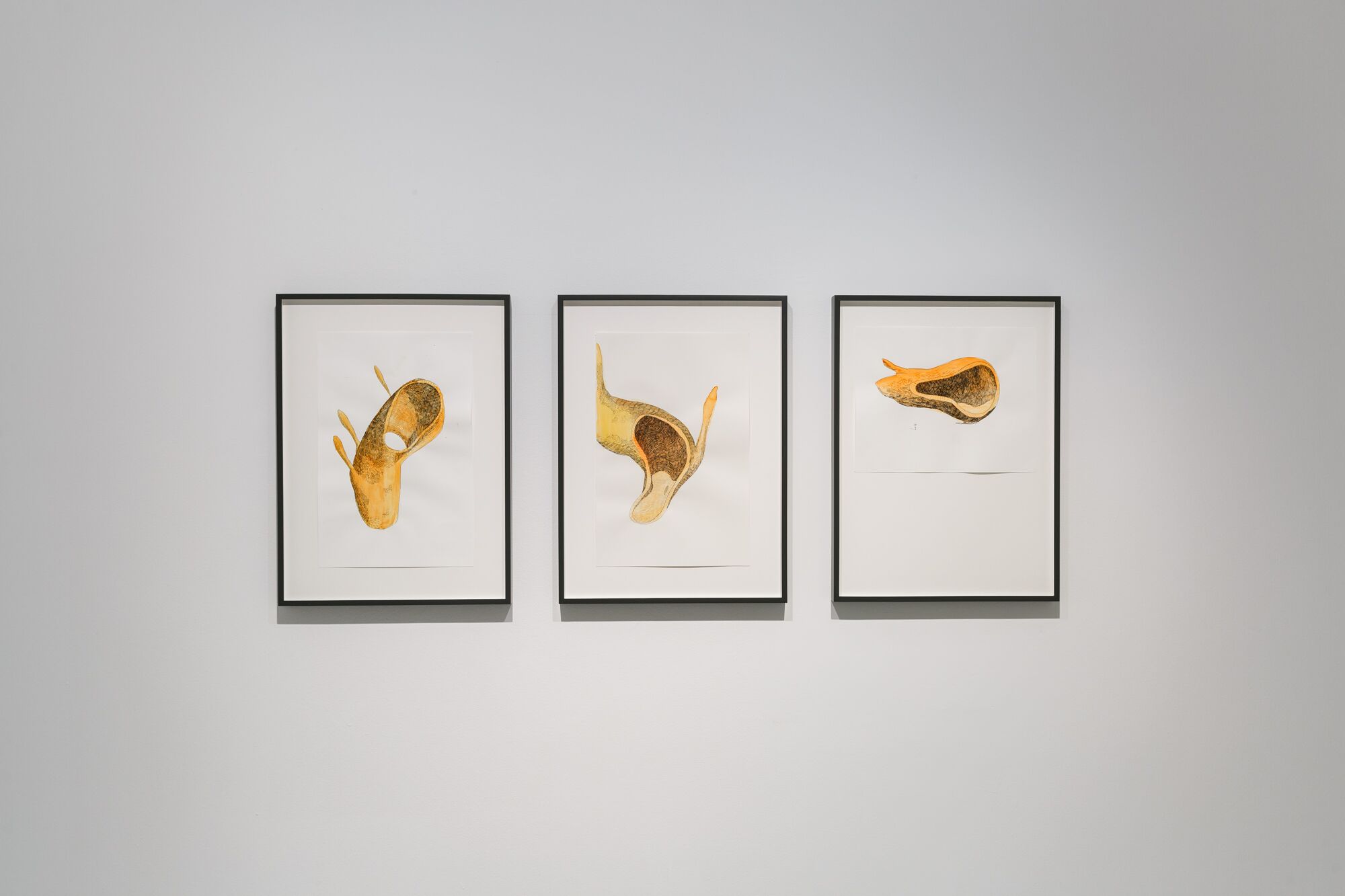 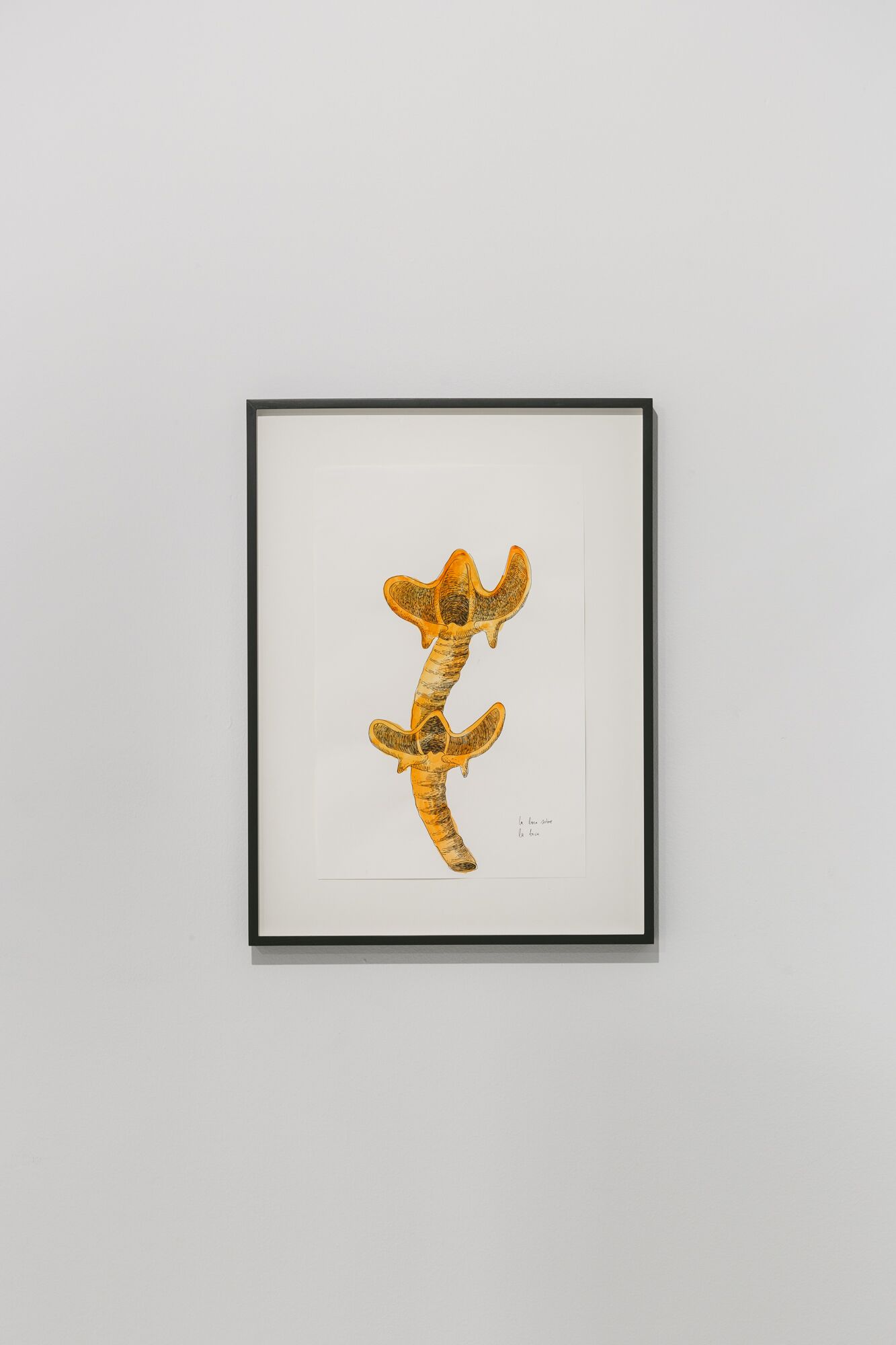 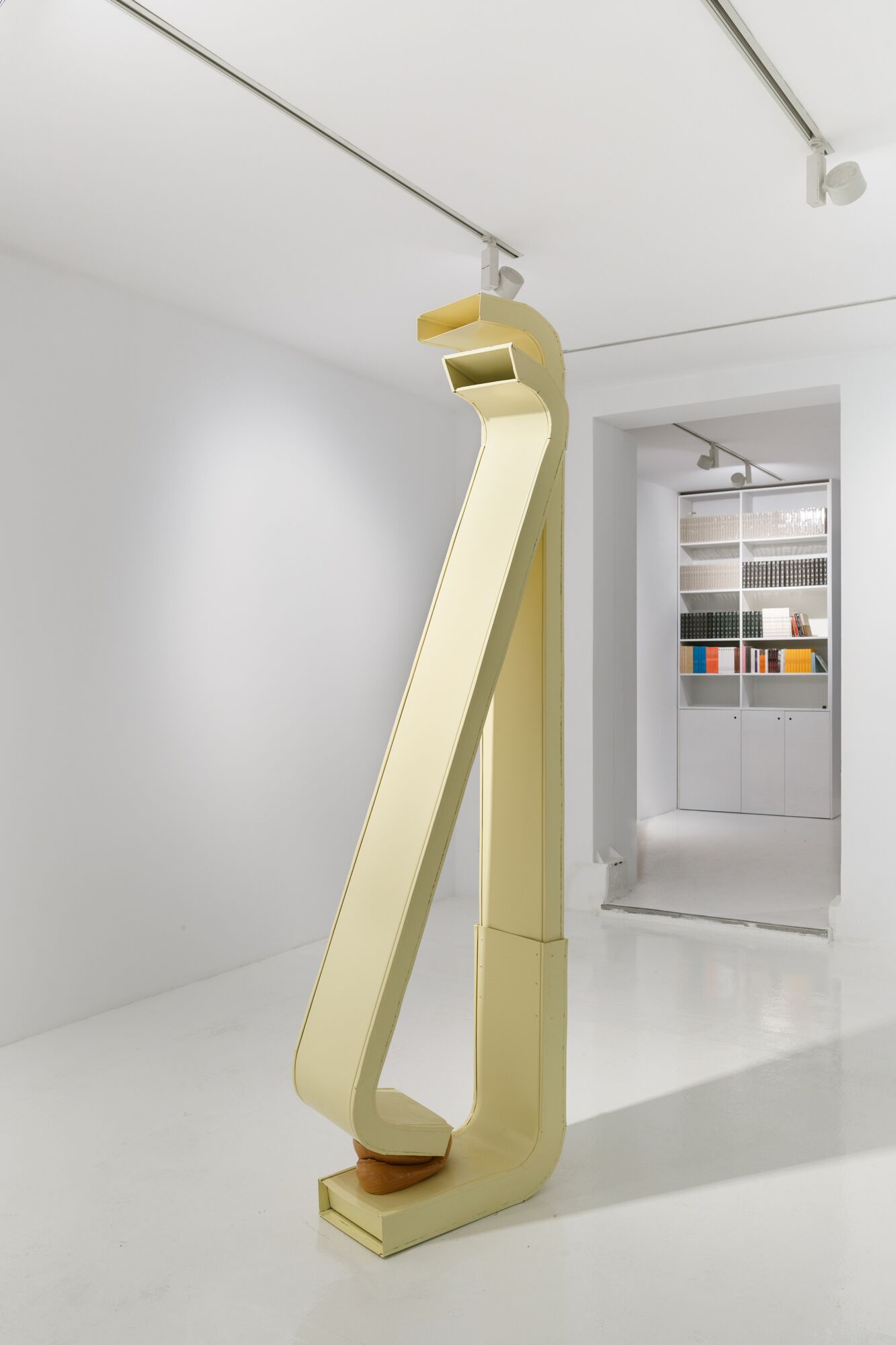 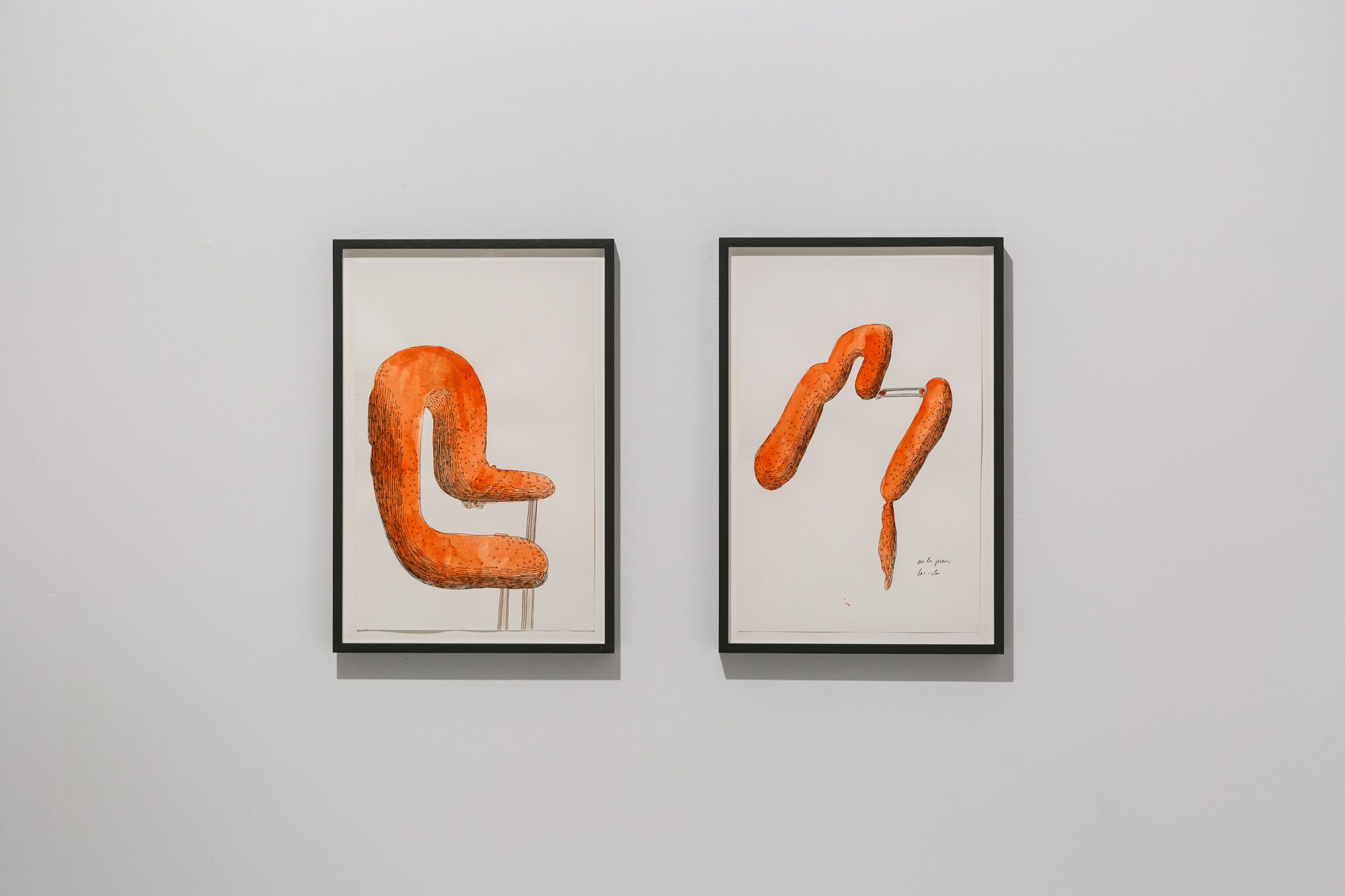 On this occasion, the nature of Teresa Solar’s work is somewhat different from usual. She momentarily takes a step back from installation to instead concentrate on the relationship between sculpture and drawing. The pieces that comprise the exhibition are an attempt to reflect on the genesis of her work.
The drawings and ceramic pieces thus act as a type of graphic record outlining the structure of reflection, perception and experience that is at the root of each form, each piece and the relationships that the forms—be them drawn, expressed through clay, or forged from metal—establish with one another. The work of Teresa Solar is loquacious—it never falls silent—and constantly evolves in dialogue with the artist’s hands. Hands that occasionally draw, scratch and colour. Hands that touch and feel the earth with water and know what the form needs from the elements. And hands that forge, creating organs of metal.

What all these forms allow us to see is what could be called ascending curiosity, which is present in the work of Teresa Solar. A type of curiosity that is perpetually complemented by a concern for method—accomplishing each one of the pieces in the best possible way—and for the way they are understood as a whole: the groups that are formed as each piece comes into existence, so to speak. Notice the cavern-like shells, which have a mantle just like the cavities of marine molluscs: a clay shell and a casing that provides the creature with shelter and gives it colour and a sense of life in drawings. These figures open themselves up to us and seem as if to say: ‘Let me ask you a question!’, and, ‘Allow me to make a confession!’. Who has inhabited these forms? The confession being that whoever it was has managed to deposit the material and rotate from within in such a way that they have created a perfect mantle. They have managed to carve out an interior, a cave, a protection system and, at the same time, they have left a record of the effort that went into the shell’s development thanks to the adornments and words. Words that have also been written with the bones of a flexible skeletal structure that is able to produce ink with a secreted but not yet calcified substance.

We find it strange to think about those life forms that express things about life while emerging like a mollusc. We nd it strange because as humans we only associate that function with ourselves: body functions and thinking are the sole preserve of our own species. We have not granted any other species whatsoever the ability to think while living their life, so to speak. On balance, our imaginative intolerance of other species is in nite.

Take a look at the drawings on the wall and then look at those visible on the shells and mouths that speak to us. We are convinced that we live within an incessant stream of acts of thought, and we believe that only our species can prove its ability to think. How arrogant! That is precisely the response of the work at hand, and the work of many other artists of Teresa Solar’s generation: things, matter and form also account for the way in which multiple life forms harbour intelligence. And harbour is an important notion; hence how the pieces appear like cavities. Hence also the drawings, since they help us to understand the order of heightened energy that is at the root of each form that has been created and the potential of artistic practice—or thinking—by directing said energy at what could be called ‘concentration’, or the piece.
In this exhibition Teresa gives us the opportunity to partake in a fascinating moment, in the light that is generated amid the background noise or our thoughts as we explore, albeit virtually, the works for the first time with our eyes and our hands and the power of partial understanding, of our perspective on the pieces each minute we spend with them. This sequence of receiving and assimilating is fundamental so that a receptive assessment can come to pass; that is, the possibility that all these forms, lines, objects, creatures and lives made artworks can touch us, fill us and call us.